Accessibility links
Biblical Literalists Say End Is Coming In 'The Sign' : 13.7: Cosmos And Culture Biblical literalists affirm in The Sign that Sept. 23 is the day the end comes as prophesied in Revelation. Fortunately, the film doesn't only present this version of the story, says Marcelo Gleiser.

Is The Apocalypse Coming? No, It Isn't!

Is The Apocalypse Coming? No, It Isn't! 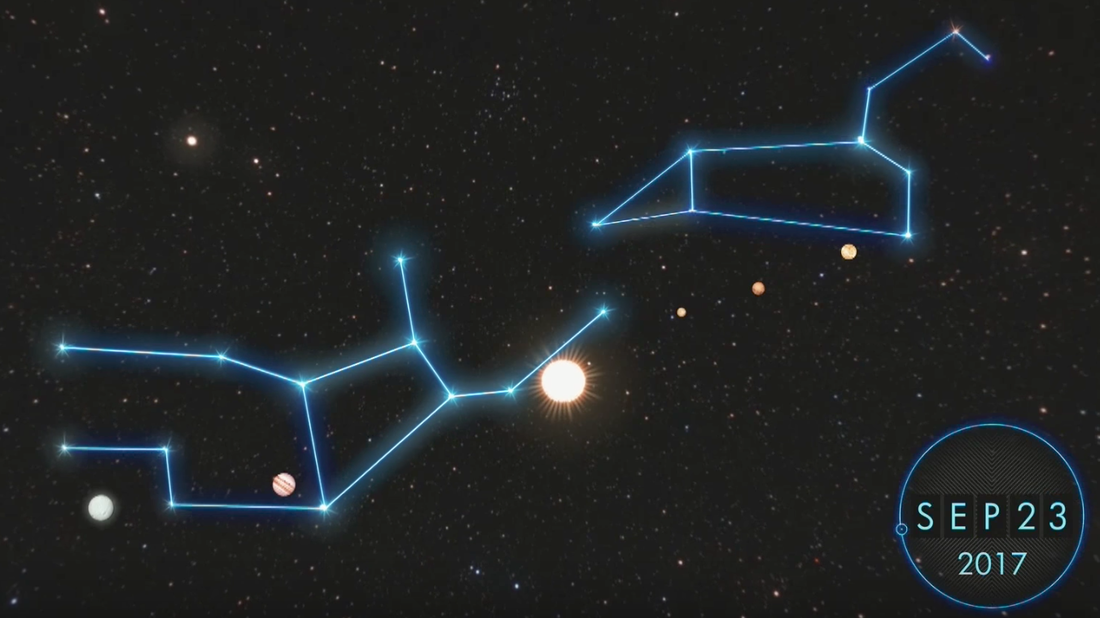 Screen shot from The Sign, a documentary in which biblical literalists claim the end is coming on Sept. 23 with a specific planetary alignment. YouTube hide caption 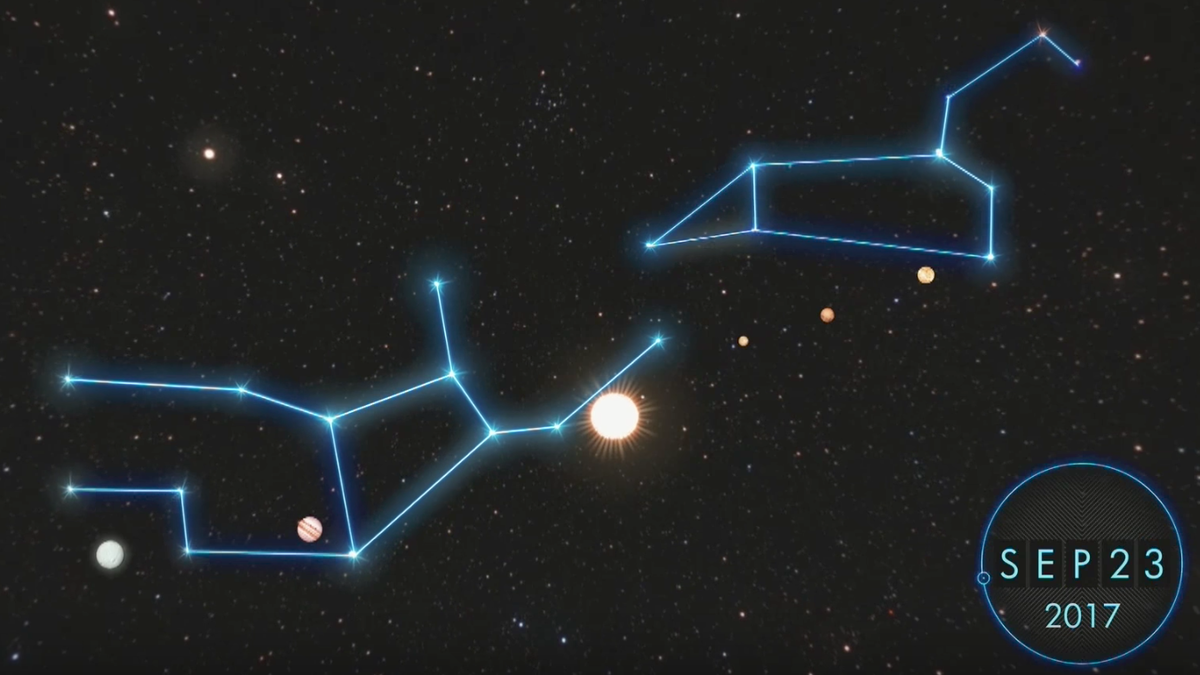 Screen shot from The Sign, a documentary in which biblical literalists claim the end is coming on Sept. 23 with a specific planetary alignment.

The Sign, a documentary directed, shot and produced by Josh Turnbow and Robert Dvoran and set to air Thursday, addresses whether the end of days is coming this month, as some biblical literalists predict.

The "sign" in the title refers to an alignment in the sky peaking on Sept. 23, whereby Mercury, Venus, Mars, and Jupiter will be around the constellations of Virgo and Leo, together with the sun and moon. Sept. 23 is when Jupiter leaves Virgo after being there for a while.

According to Revelation 12, some say, this is when the end comes, after much turmoil and destruction:

"A great sign appeared in heaven: a woman clothed with the sun, with the moon under her feet and a crown of twelve stars on her head. She was pregnant and cried out in pain as she was about to give birth. Then another sign appeared in heaven: an enormous red dragon with seven heads and ten horns and seven crowns on its heads. Its tail swept a third of the stars out of the sky and flung them to the earth. The dragon stood in front of the woman who was about to give birth, so that it might devour her child the moment he was born. She gave birth to a son, a male child, who "will rule all the nations with an iron scepter." And her child was snatched up to God and to his throne.

According to the biblical literalists interviewed in The Sign, airing Sept. 14 at 8 p.m. ET/PT, the "son" leaving the birth canal is Jupiter leaving Virgo. The red dragon is associated by some literalists with Planet X, a planet (wrongly) conjectured to orbit the sun about 90 times more distant than Earth, which, the literalists say, comes every so often to create havoc.

To make a long story short, many biblical literalists affirm with utmost conviction in the documentary that Sept. 23 is it — the day the end comes as prophesied in Revelation. (A preview of the film can be watched here.)

Fortunately, the documentary doesn't only present this version of the story. Michael Shermer, author and editor of Skeptic magazine is there, too, to make sense of the nonsense. And so are Ed Krupp, director of the Griffith Observatory, and Konstantin Batygin, an assistant professor of astronomy at Caltech. Together, they explain the scientific arguments against such fears, including the fact that there is no Planet X. Any such planet, given its elongated orbit and large mass, would have caused major instabilities in the solar system, including ejecting the Earth from its place around the sun. Given that Earth has been orbiting the sun for 4.5 billion years, its orbit is pretty stable so far. There is no such planet.

Watching the documentary, what I find most striking is the strength of the literalists' conviction. What will they say on Sept. 23 when the world remains where it is? Surely, as Shermer mentions, Trump may do something, or North Korea. But isn't it always the case that there will be turmoil somewhere in the world — and this turmoil may be interpreted as a sign from a biblical prophesy? Hasn't this happened over and over, prophecy of the end after prophecy being debunked by the boring continuity of life as we know it?

Believers disagree. They argue that it all revolves around Israel and the mounting tensions in the region — and that this is it. Israel's existence, a chronology of dates from its foundation to wars, everything, they say, points to the veracity of the old prophecies. One of them in particular, Michael Rood, has returned to Israel to watch the end unfold. Rood looks like a benevolent rabbi, a biblical patriarch. He is convinced that come Sept. 23 something will happen to the sun, signifying the dragon of the prophecy, although not necessarily Planet X. He is convinced that God will send the sign, and it need not be consistent with science. In his world, there are two coexisting parallel realities, a natural and a supernatural one. Come the end, they will clash in decisive ways.

I watched the documentary in a state of awe. The key question here is what makes people believe in such literal readings in 2017?

In my book The Prophet and the Astronomer: Apocalyptic Science and the End of the World, I explored why apocalyptic ideas often depend on some celestial event and how such ideas have percolated from religion to science. The skies do display unusual alignments and phenomena that have been observed for millennia. Since for believers the skies are often the realm of the gods, the jump from seeing something strange up there to attributing it to some sort of divine message is not a huge one. Indeed, in cultures across the globe we find eclipses, comets, and meteor showers being associated with evil portents. If the skies act crazy, the gods can't be happy. If the gods aren't happy, we will pay for it especially — if you are a Christian — the sinners.

The fear from the skies comes from the awareness of our essential fragility as we face nature's awesome powers. The current hurricane season is an obvious example of this, as is the recent solar eclipse. St. John makes good use of the blackened sun in his Revelation, knowing well that the image conjured terror in his readers. If God controls the heavens and He makes the sun disappear for a few minutes, couldn't He just as easily make it go dark forever?

Shermer, Krupp, and Batygin do their best to dispel any potential danger. Krupp goes as far as chiding the literalists for scaring otherwise nice, good people with such fantastic tales. The documentary explores the potential for an all-out nuclear war starting with Iran bombing Israel or North Korea doing something equally outrageous. Of course, no one can predict what rogue states with nuclear weapons will do. It is meaningful that I am writing these lines on 9-11, a date forever tinged with blood in the U.S. However, even if something awful does happen on Sept. 23, an act of war or of terror, it will be hard to know what came first, the act or the belief that an act on this date would conjure terror on large sectors of the population.

The strength of The Sign is to expose so openly the extent to which literalists will go to justify their beliefs, some using very complex numerology and coincidences as clues. The film ends with someone (I suspect Rood) asking: "Could this be the year? This could be the year."

Unfortunately, any year could be the year. If anything, it's really up to us to collectively make a difference in what we see around us, from social injustice to disease and famine. To instill fear as an agent of change hasn't worked for millennia — and it won't work now.