Accessibility links
Should College Professors Give 'Tech Breaks' In Class? : 13.7: Cosmos And Culture Is it necessary coddling or just good science to give college students breaks to check their phones? Anthropologist Barbara J. King takes a look. 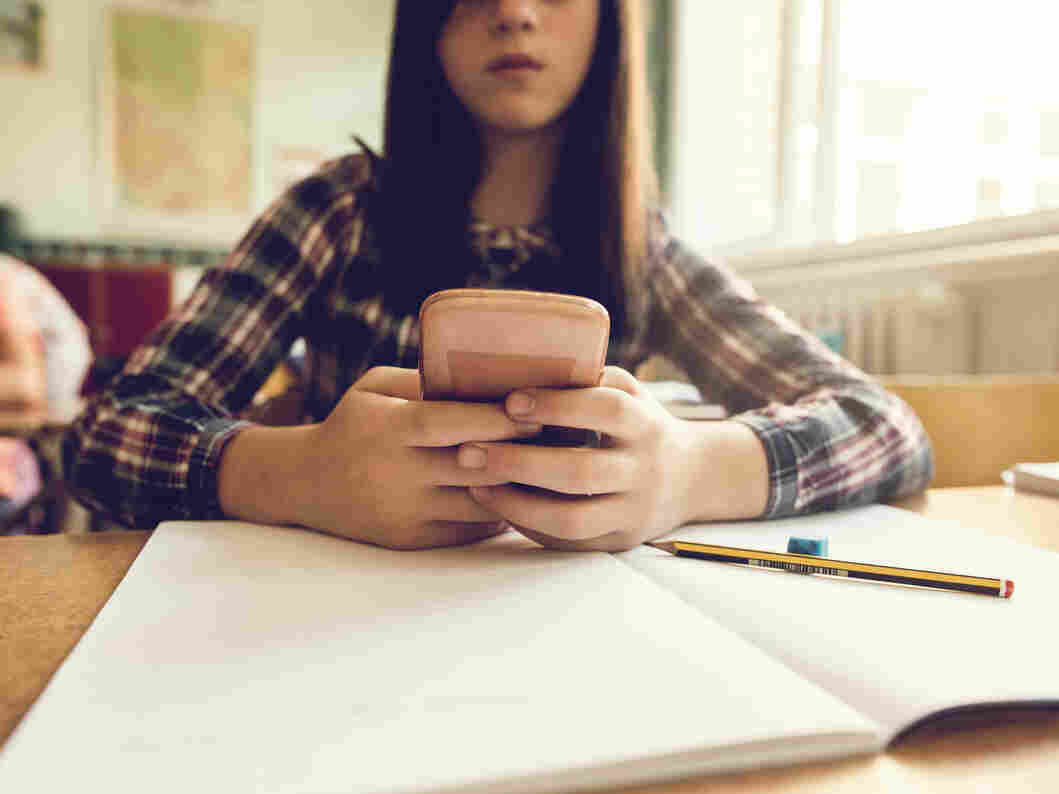 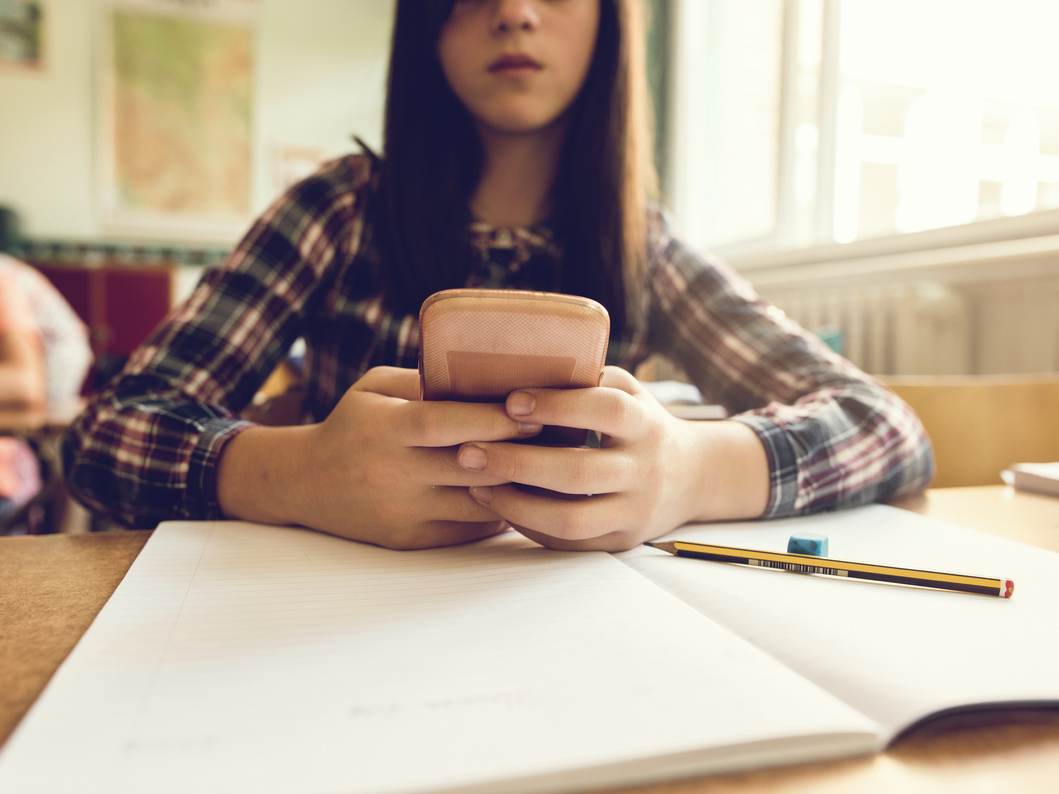 In his new novel Origin, Dan Brown (most famous for The Da Vinci Code), describes his protagonist Robert Langdon's approach to the conundrum of students' devotion to personal tech devices in the classroom.

Langdon is, Brown writes, "one of several Harvard professors who now used portable cell-jamming technology to render their lecture halls 'dead zones' and keep students off their devices during class."

In real life, jamming technology is illegal in this country. But it's no fiction that college professors may go to great lengths in response to students using cellphones and other computer devices inappropriately in class. Writing for The Huffington Post last year, Robert Shuter described some professors' "extreme measures to manage students' digital devices." These include, he writes:

"public humiliation, personal reprimands, and disabling wireless access. For example, one instructor disclosed to us that, when he catches a student peering at a website unrelated to the class, he jokes publicly that the individual is watching pornography in order to shame the student. A professor teaching graphic design in a mediated classroom said she projects on the classroom screen, for all to see, what's on the offending student's computer. Several professors told us that they confiscated the phones of offending students. Another professor attempted to use an illegal cellphone jamming device he bought in China, but it didn't work."

When I taught, my own approach was to allow technology in the classroom with the clear expectation that each student would use it wisely, staying off Facebook and Twitter — and without any form of public shaming when this expectation was violated.

Certainly, students with disabilities of all types, visible and invisible, documented and undocumented, may benefit from the ability to use laptops, for example, in the classroom — and not necessarily through seeking a special accommodation that singles them out as different.

Near the end of my teaching career, I did inform students about research along the lines of what Tania Lombrozo has described, showing that students' embrace of devices even for "good" purposes in the classroom may, in some cases, interfere with learning.

This whole topic shot to the forefront of my consciousness again when I read Ben Gose's piece "A New Generation of Digital Distraction" in a special section of The Chronicle of Higher Education published last month. Gose described "the new crop of traditional-aged students," those born between 1995 and 2010, who "have been dubbed 'digital natives' for their comfort with — and addiction to — devices like smartphones."

Gose cited a recommendation by Larry D. Rosen, emeritus professor of psychology at California State University-Dominguez Hills: These digital natives should be offered a one-minute tech break in the classroom to check and send messages on their phones. More specifically: "Instructors should initially schedule the breaks every 15 minutes, [Rosen] says, but then gradually increase the time between breaks to teach students to focus."

I was a bit stunned by this notion. A break every 15 minutes, for college students? How is the professor to concentrate on coherent presentation and the students to follow the thread of her or his argument, with so many disruptions? Isn't this treating college kids like, well, children?

I emailed Rosen to probe a little further. While there's been no formal research on the idea of starting out with a break every 15 minutes, then increasing the intervals between breaks, Rosen told me it succeeds in practice according to the reports he hears anecdotally from professors.

Here's a selected part of our Q&A (edited for length and clarity):

What do you say to critics who'd point out that college students should be expected to have an attention span in the classroom greater than 15 minutes from the start, and this sort of accommodation is going too far, coddling students?

They are blaming the wrong people! College students are still dealing with a prefrontal cortex that is likely not finished being myelinated which allows for better transmission of information between brain areas, so they are ripe for distractions.

Also the technology sector, who I refer to as attention merchants, have designed the tech world to grab your attention from whatever you are doing to the next shiny object on your phone or computer or tablet or watch or wherever.... Tech companies work hard to capture your attention and if you are working with an immature prefrontal cortex you are more easily distracted.

You've done research on the impact of classroom text message interruptions on comprehension and written a book (with Adam Gazzaley) called The Distracted Mind: Could you summarize your main message for college educators in terms of effective teaching of distracted minds?

Understand that your students have a short attention span. We have watched students study something very important and even with us watching them they only attend less than 10 of the 15 minutes.

The biggest distractors are any technology that involves communication (social media, texting, email, etc.) We also know that when not allowed to access their smartphones, heavy users (our college students!) start to get anxious within 10 minutes and continue to get anxious unless allowed to check in. That anxiety works counter to attention and comprehension of lecture material.

One option is to ban technology in the classroom but that will never work since we know that the typical college student checks their phone every 15 minutes or less — and a recent study with an app monitoring smartphones showed that they checked their phone 50 times a day for a total of 262 minutes or about 5+ minutes per check-in.

So then, for Rosen, we're back to the idea of those very frequent breaks at first, working toward the goal of a single tech break per class.

Even though I'm not a faculty member anymore, I do get invited to college campuses to talk about my work in anthropology. Last week, I taught a seminar on animal cognition and emotion for the Oklahoma Scholar-Leadership Enrichment Program (OSLEP) at the University of Oklahoma. For 4 1/2 days, 19 students from higher-ed institutions across the state joined me in the classroom. One thing I noticed right away was that, unless we were engaged in a collective activity requiring the use of personal computers, students kept their laptops shut and took notes by hand. (That was their choice, not a requirement of the seminar.)

Yes, the students' cellphones were always near. When we took bathroom or stretch breaks at my discretion, all of us checked our phones: I did, too.

But very rarely did a student attend to his or her device instead of to lecture or discussion. Sure, it's possible I missed some moments of inattention (though students were arrayed in a semicircle right in front of me and there was no place to hide!). And when we took a field trip to a museum one afternoon, I was sorry to see that some students devoted time to their phones that could have better been spent exploring the exhibits.

What I didn't see was a group of easily distracted students or students enslaved by technology.

What explains this happy outcome over several intense days? Was the seminar so compelling that it held students' attention? (Hey, a teacher can always dream.) Was it because these students were honors-level and highly motivated? (This was almost certainly a major factor.)

There's a genuine issue in higher ed to contend with here, one I don't deny. Digital natives' brains are still maturing, it's true, and sometimes (let's be wary of across-the-board stereotypes) they do use their personal tech devices inappropriately. The conversation regarding what to do about this will be ongoing.

Surely, though, one big key is to have high expectations of students: to convey to them quite explicitly that the college classroom is a special place where important things go on, and where they can and will rise to the occasion and contribute by way of their focused attention and participation.