Accessibility links
A Cultural Project In Polynesia Has The Power To Teach Us All : 13.7: Cosmos And Culture Polynesia was colonized by the French and, even today, Polynesians are taught more about French history than their own. A new archaeological project aims to help change that, says Barbara J. King. This image on a panel along the Archaeological Nature Trail in the 'Opunohu Valley on the island Mo'orea shows a taro farmer at work. Diana Izdebski/Courtesy of Jennifer Kahn hide caption 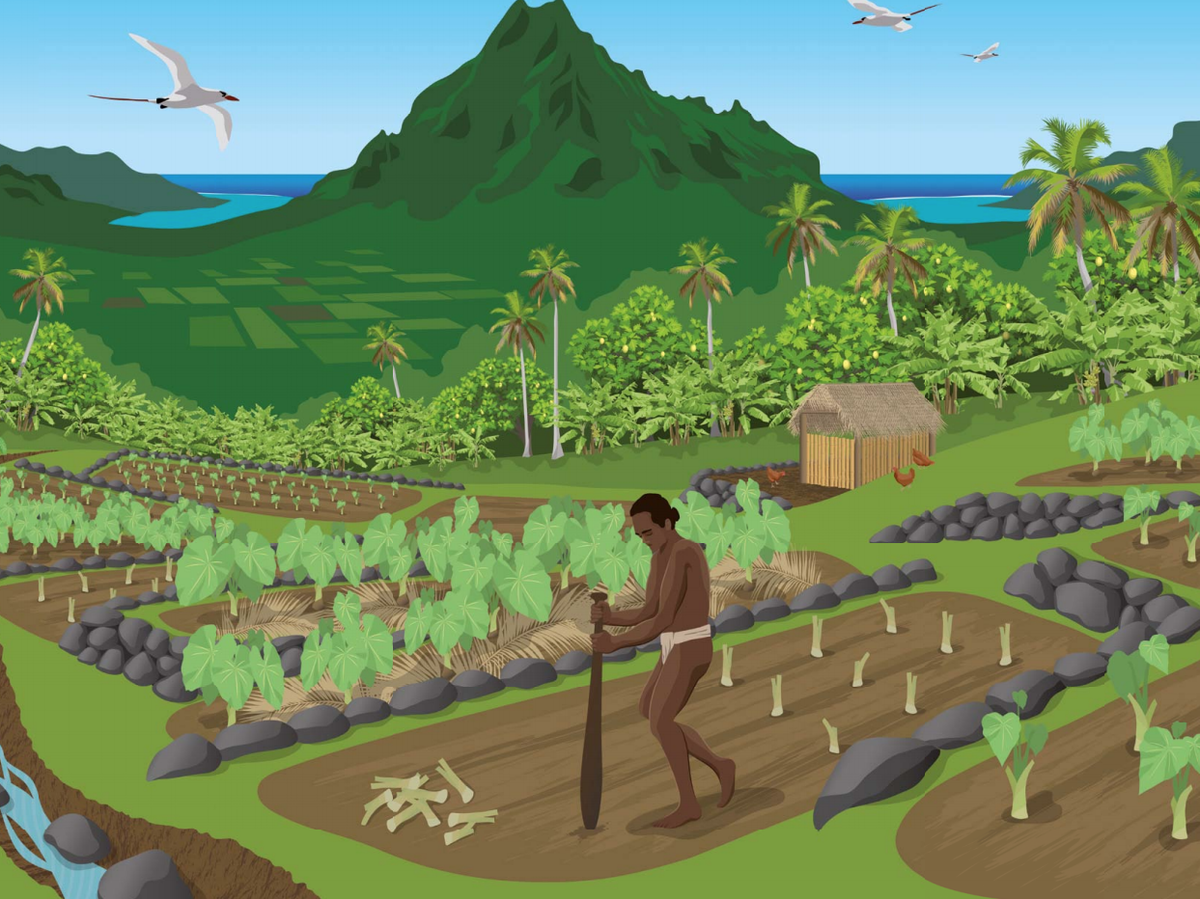 This image on a panel along the Archaeological Nature Trail in the 'Opunohu Valley on the island Mo'orea shows a taro farmer at work.

When you think of Polynesia, what images first come to mind?

My bet is that canoes and ocean navigation play some part in whatever your brain conjured up in answer to that question. Thanks, in part, to popular culture from Disney's film Moana, released a year ago this month, to long-lasting interest in Thor Heyerdahl's voyage on the Kon-Tiki, many of us tend to associate Polynesian culture with the sea.

And some Polynesians of the past were skilled ocean-going explorers. But the work of Jennifer Kahn, an archaeologist at the College of William and Mary, tells a deeper story about Polynesian cultural heritage. It's one that reveals everyday life to be profoundly agriculture-based. With extensive research experience in Eastern Polynesia, specifically the Society Islands of which Tahiti is a part, Kahn's work supervising a Tahitian crew has now resulted in reconstruction of a 1,000-year cultural heritage not centered on the sea.

A few months ago, Kahn (who works in the same department I did at William and Mary and is a friend) and her team completed construction of the Archaeological Nature Trail in the 'Opunohu Valley of the island Mo'orea, next to Tahiti. (On both islands, the language is Tahitian and people who live there are referred to as Tahitians).

Settled around AD 950, the valley is a Tahitian cultural treasure because of its archaeological sites and its native plants and birds. It was also an example (between the years of about 1350 and 1800) of what anthropologists call a complex chiefdom, a highly stratified society composed of ranks ranging from chiefs to commoners. In this society, a person's rank was determined at birth, with elites living in houses of a different types than those low-ranking. For anthropologists, studying such a system helps understand the origins of inequality.

Now, Tahitians visit this trail, which wends through the tropical rain forest and features two reconstructed houses and 15 informational panels in Tahitian, French, and English. There, they rediscover their own past. A panel along the Archaeological Nature Trail in the 'Opunohu Valley on the island Mo'orea shows a rectangular structure that served as a craft making area. Evidence shows the interior was used for manufacturing adzes. Outside, breadfruit paste was fermented in underground pits — and there is extensive evidence of cooking. Diana Izdebski/Courtesy of Jennifer Kahn hide caption A panel along the Archaeological Nature Trail in the 'Opunohu Valley on the island Mo'orea shows a rectangular structure that served as a craft making area. Evidence shows the interior was used for manufacturing adzes. Outside, breadfruit paste was fermented in underground pits — and there is extensive evidence of cooking.

This strikes me as a very moving prospect. I think about the emotions I feel standing on the river shore at Jamestown, Va., near where I live, the site of the first permanent English settlement in North America. Without a doubt, the legacy of the English settlers who came to Jamestown involves violence toward native American peoples: that knowledge I don't hold apart from what I experience at Jamestown. Just as American cultural heritage is complex, so are the emotions to be felt.

Almost all U.S. school kids learn about Jamestown in school, but the rich heritage of Native American cultures — past and present — is rarely emphasized to the same degree. Tahitians generally don't learn much about their own past in the classroom at all. France first colonized the islands in 1767, and the educational system has long emphasized French rather than Tahitian history.

"Like [in] many parts of the Pacific, [Tahitians] grow up in a colonial context where [they] learn a lot more about Napoleon and Versailles than they do about any aspect of their Tahitian culture."

That really bears thinking about: school-kids in Tahiti unaware of a millennium's worth of rich history but carrying an image of Versailles around in their heads.

As an anthropologist who consults with the descendant community on Mo'orea, Kahn helps restore the Tahitian past to the people.

One of the panels on the trail, for example, shows a person at work in a beautiful garden, with mountain and sea in the background; the text explains that "Taro was considered the king of all root crops. Several thousand agricultural complexes for planting taro and tree crops like the one before you are found in the valley...The earliest agricultural terraces were constructed AD 1250, while the majority were constructed after AD 1450."

Other panels include text and graphics about residential complexes and ritual centers in the valley.

Her crew, Kahn said, is "so proud of their work, a tangible reminder of the beauty of their culture." Kahn herself was moved when she visited the trail on a weekend to find crew members in their leisure time showing off the trail to their families.

Among her publications, Kahn has co-authored a book about the evolution of social complexity with a focus on how elites in complex chiefdoms assume power, using the Society Islands as a touchstone.

The message I was left with, after talking with Kahn, involves the power not only of knowing one's own past, but also of landscape itself. When we — Americans, Polynesians, all of us — stand on historic ground, we're experiencing our cultural heritage not in a museum but in context.