Accessibility links
Science's Journey From Data To Truth : 13.7: Cosmos And Culture There's more to the scientific method than what you learn in high school: Scientists argue with each other, too, and the participation of nature — whose say is absolute — is key, says Adam Frank.

Science's Journey From Data To Truth

Science's Journey From Data To Truth 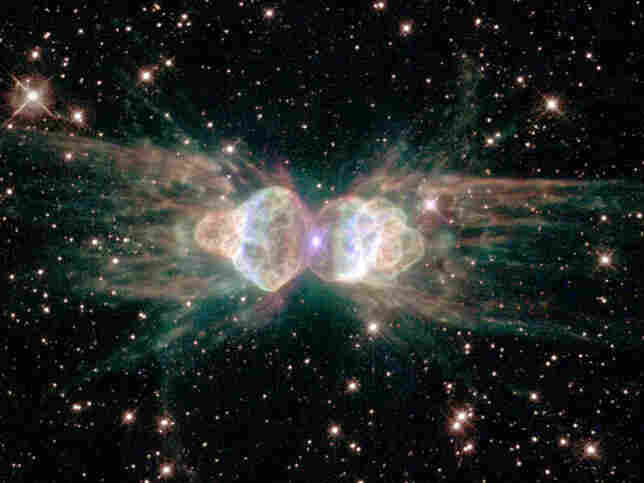 A Hubble Space Telescope image of the Ant Nebula. Astrophysicist Adam Frank spent last week at an international meeting in Hong Kong trying to understand the science of what these objects tell us about the last gasp of dying stars like the sun. NASA, ESA and the Hubble Heritage Team hide caption 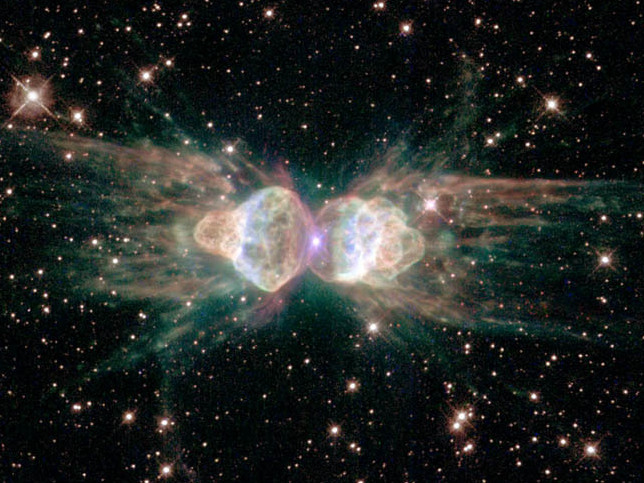 A Hubble Space Telescope image of the Ant Nebula. Astrophysicist Adam Frank spent last week at an international meeting in Hong Kong trying to understand the science of what these objects tell us about the last gasp of dying stars like the sun.

In an era of "fake news" and "alternative facts," we now face a massive disconnect between what science thinks it understands about the world (i.e., global warming) and what some people want to believe is true.

But how does "science" come to know anything about anything? After all, what is science but a collection of people who call themselves scientists? So isn't it as flawed as everything else people create?

Last week, I had a chance to watch the human side of science in action. I was in Hong Kong at a meeting focused on how stars die. It's an amazing act of hubris to think that we humans, bound to lives that barely last a century, have anything to say about stars and their billion-year life spans. But there we were, about 60 women and men from every part of the world, arguing over data gathered by stunningly complex machines that watch the skies for us. In those numbers, we thought we could read something about the last gasps of stars like the sun.

I wish everyone could go to a small scientific meeting once in their lives. A whole lot of misconceptions would get dispelled pretty quickly. It's at small meetings like the one I just attended that one can see something remarkable. You can see science decide. You can see it turn.

In high school, we learn about the scientific method, and it seems so clear and orderly. First, formulate a hypothesis. Then, perform an experiment to test the hypothesis. Finally, use the experimental results to keep the hypothesis or throw it away.

But who decides which hypotheses are worth testing? Who decides when an experiment has really drop-kicked a hypothesis out of the running? The problem with the high school version of "scientific method" is that it doesn't include people. A robot could be programmed to do it. Most of all, it doesn't include the most critical, peoplecentric thing that people doing science do:

They argue a lot.

There was a bunch of stuff I thought we knew at the start of my meeting on dying stars. Most important, I thought we were all clear on the role of companions. More than half the stars in sky have siblings. These are binary or trinary groupings of stars that were born together (most are double stars and are therefore called "binaries"). As they orbit each other, the evolution and old age of these sibling stars can be radically altered. Through new data from new, ultrapowerful telescopes, it soon became clear that we were getting a lot wrong about the death of these binary stars. It was kind of stunning. So, how did our little community of scientists respond? 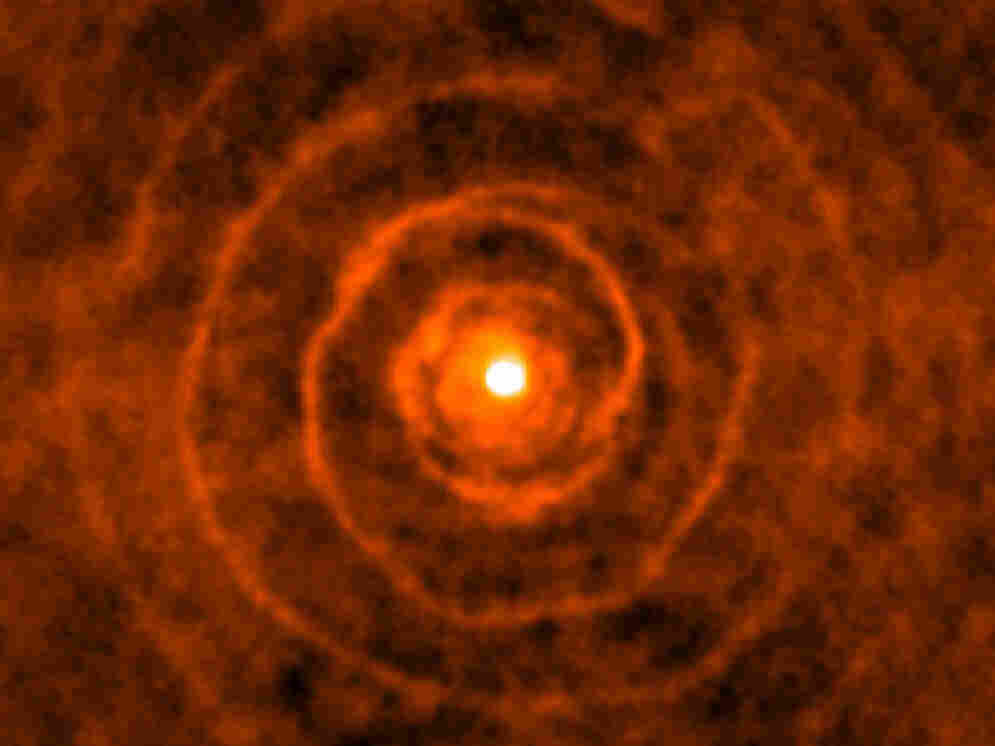 This spiral pattern was created by binary (double) stars as they orbit each other. One of the stars is near death and blowing off its outer layers. The companion star's orbit carves the spiral in the dying star's outflow gas. The spiral is hundreds of times larger than our entire solar system. Hyosun Kim et al./ALMA (ESO/NAOJ/NRAO) hide caption 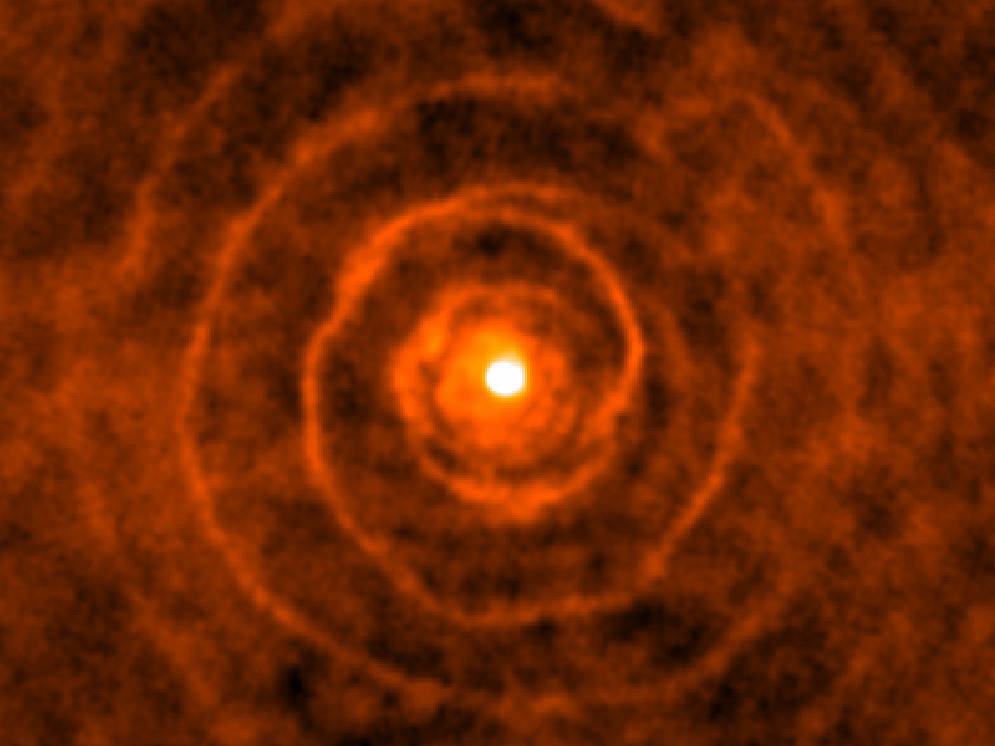 This spiral pattern was created by binary (double) stars as they orbit each other. One of the stars is near death and blowing off its outer layers. The companion star's orbit carves the spiral in the dying star's outflow gas. The spiral is hundreds of times larger than our entire solar system.

We argued a lot.

We argued about the telescopes. Were they behaving the way we thought they should when they collected light from the distant stars? Then we argued about the data. Had the patterns in the light been analyzed correctly to extract properties of the stars (things like the size of an orbit or the mass of a star)? Finally, we argued about the theories we used to interpret the data. Were we using all the physics we needed to predict the evolution of our dying double stars?

The arguments were sharp and keenly focused. Sometimes they were heated, too. Scientists are generally well-mannered — but that doesn't mean they're nice. You definitely needed to bring your A-game and stay on your toes if you wanted to play.

But after a week of all this arguing — some during the talks, some over lunch, some walking to dinner — something remarkable had happened. Collectively, our little community of researchers had worked through a lot of our questions. While we didn't answer most of these science issues, together we had sorted them out. As a group, we worked out which questions were important to our long-term questions (How do stars like the sun die?) and which ones were phantoms. Working collectively, we had seen things that were individually obscured — and in that way we'd made progress.

The arguing and the give-and-take I saw last week are essentially human, and an essential part of science. But if that were all there was to the process, it wouldn't explain science's extraordinary power to transform the world. We didn't cure polio, build electric power grids, and send human beings into space by just arguing.

It's the data that lift the human process of science beyond the confines of humanness. My colleagues at the meeting weren't just arguing with each other. There was another participant at that meeting: Nature was there, too, in the form of those telescopic images and other data. And, as scientists, we all agreed that, ultimately, its say was absolute.

Science is not a straightforward journey from the data to the "truth." Interpreting data is hard, requiring the most exhaustive analysis, checking, rechecking and rechecking the rechecks. That's what the arguing was all about. But in the end, it becomes pretty clear when someone is ducking the responsibility to hew closely to what the data tell us.