Accessibility links
Latest 'Star Wars' Teaches The Value Of Failure : 13.7: Cosmos And Culture The Last Jedi highlights the need for failure to find success, as the ongoing dynamic of The Force — the tug-of-war between good and evil — aptly defines our humanity, says Marcelo Gleiser. 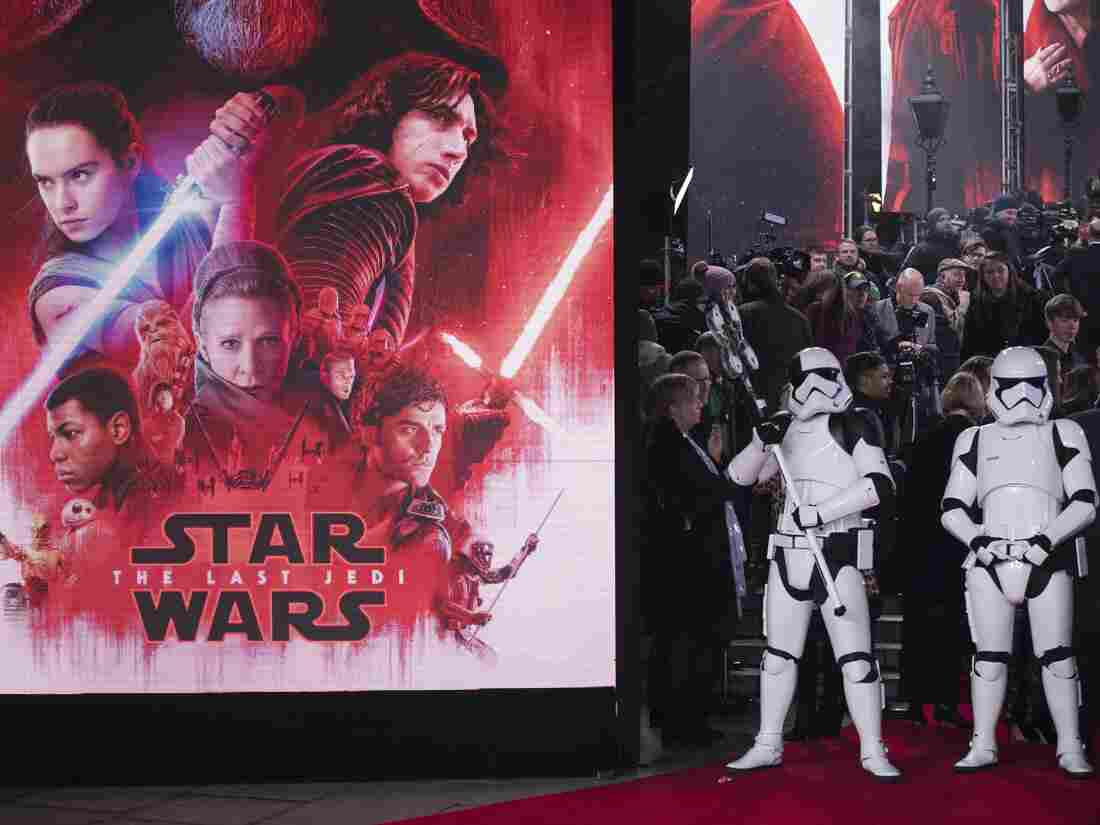 Stormtroopers pose for photographers upon arrival at the premiere of the film 'Star Wars: The Last Jedi' in London, on Dec. 12. Vianney Le Caer/Invision/AP hide caption 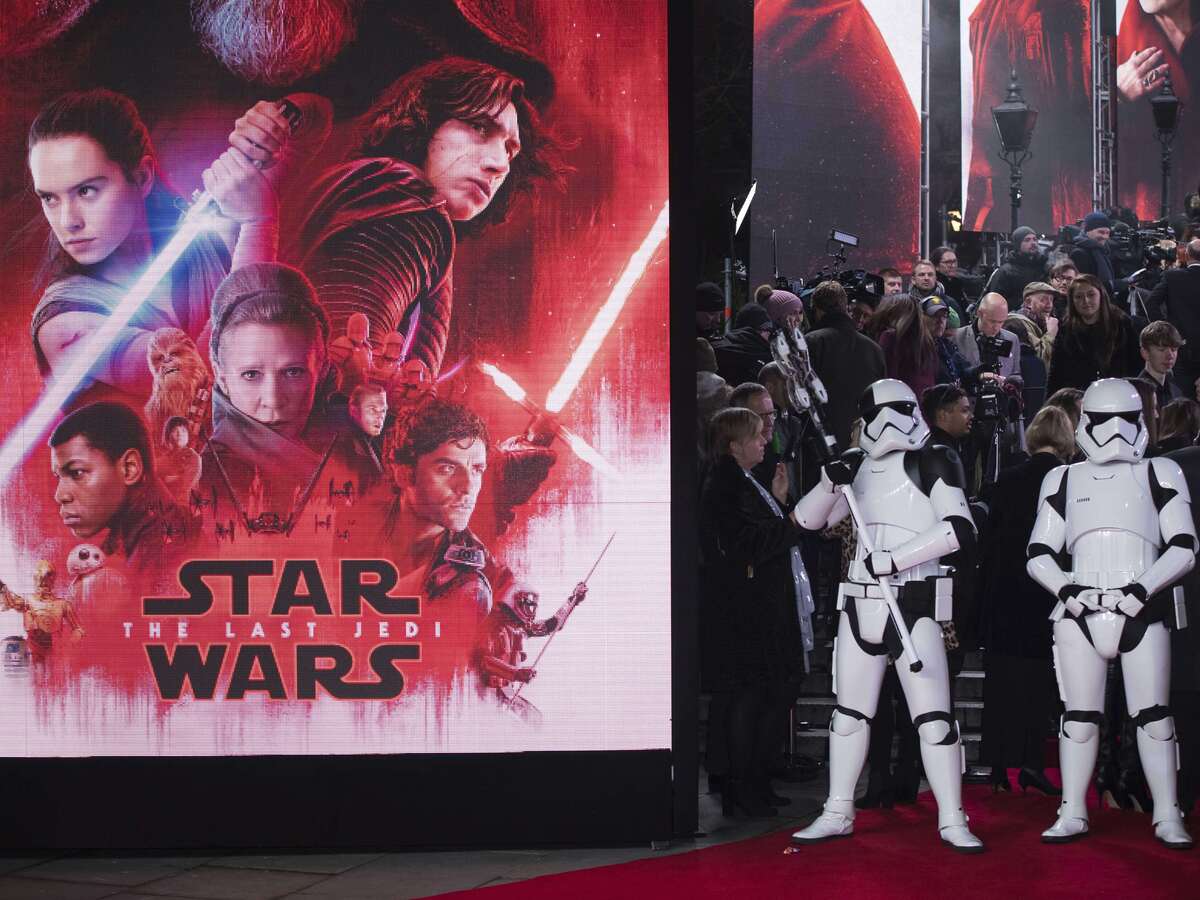 Stormtroopers pose for photographers upon arrival at the premiere of the film 'Star Wars: The Last Jedi' in London, on Dec. 12.

Unless you do live in a galaxy far, far away, you know episode VIII of the Star Wars saga opened last week to much anticipation.

I took my family on Saturday afternoon, making sure I didn't talk to anyone that had seen it already.

[Spoiler Alert: If you haven't watched the movie you may want to wait to read this review until you do.]

The movie combines the reawakening of The Force with loss. Carrie Fisher, who has played princess Leia Organa since Episode IV, passed away unexpectedly after she completed her scenes. In the movie, she floats through outer space, ghostlike, after her ship is blown up, somewhere between life and death, and finds a way back in. She does have some Force in her, after all, and not just to connect with Luke. In the real world, her way back in is through the silver screen, where she has given life to one of the most memorable characters in cinema. We miss her.

The original greats are all gone now, with the exception of Chewbacca and, of course, the indestructible Millennium Falcon, a key weapon for the Resistance for generations. Episode VII The Force Awakens, has marked the time to move on to a new generation of heroes, struggling with the same angst of their ancestors, split between good and bad, having more power than they can control or realize, and thinking themselves invincible. The Last Jedi completes the transition from old to new.

As Luke Skywalker struggles with the ghosts of his past hidden in the Jedi's sacred island, conflicted about helping the feisty Rey (played by awesome Daisy Ridley) on her quest to learn the secrets of The Force, Yoda appears to him: "Young Skywalker, miss you I have..."

Skywalker is a tortured soul, racked by remorse and a paralyzing sense of failure. He blames himself for failing to rescue Kylo Ren from the dark side. Yoda, always the mentor, senses all this: "The greatest teacher, failure is." To Skywalker's astonishment, Yoda goes on to destroy all the sacred places in the island, including a holy tree and the sacred books of the Jedi, mocking Skywalker. (Or maybe Rey saved the books?)

The Force is to be felt, not theorized about. You carry it inside, not in books or holy places. It is the energy in all things, alive and not, the pulse of existence. To know it you must experience it, not read about it.

To experience success, we need to experience failure first. Many times over. That is how the Jedi get to know and control the Force, by becoming one with it. Sound Buddhist like? There is a lot of meditation in this and other Star War movies, the emptying of the mind to establish contact with the essence of all things. Just like in meditation training, it is a hard thing to do. It takes discipline, perseverance, and tolerance to failure. The results don't come quickly. They take time to grow and to mature inside. To learn, one must embrace failure and know that success is always temporary.

The whole movie encapsulates this lesson. Everyone fails. The Resistance can't stop the First Order. The First Order can't stop the Resistance. Kylo Ren, shadowing the conflicts of Anakin Skywalker, aka Darth Vader, fails to convince Rey to join him in the pursuit of cosmic domination. Rey fails to convince Kylo to abandon the dark side of the Force.

In a memorable scene, the two are playing a kind of Force tug-of-war, trying to get hold of a floating lightsaber. The weapon strains with the opposing tension, until it snaps broken. At that moment, the image of Harry Potter fighting Voldemort came to mind, both deeply connected through their dark histories, good and bad interwoven and inseparable. I wonder what's the deep relation between Kylo Ren and Rey. Are they twins as well? Would Han Solo and Leia have separated them for their own safety when very young, leaving Rey in the remote planet Jakku? But I speculate.

It all meshes well with the lessons from Yoda, that the Force is about balance in the universe, and that all creative balance is dynamic, a give and take, without winners. There can't be only good or only bad. It's as simple as that, and because of this, the story can't ever be resolved, at least not without contradicting its central philosophy.

The movie is stunningly shot, with some unforgettably beautiful scenes and lovable new characters like the little birds from the Jedi's sacred island, called Porgs.

Director Rian Johnson, who played with Star War figures when a young boy, rose to the daunting task of keeping the tradition alive. At least to this Star Wars fan, the movie delivered and more. Of course, some fans are not happy, and even threatened and insulted Johnson on Twitter. They even hated the Porgs, accusing the producers of playing cheap emotional tricks for marketing purposes. Some will also hate this review. But how could it have been any different?

The balance of the Force demands love and hate, gratitude and entitlement. The fans are just playing out the inescapable dynamics of the Force, the tug-of-war that so aptly defines our humanity.