Accessibility links
Clean Meat, Via Lab, Is On The Way : 13.7: Cosmos And Culture Would you eat beef, chicken, even foie gras grown from animal cells in the lab? Anthropologist Barbara J. King takes a look at new food technologies. 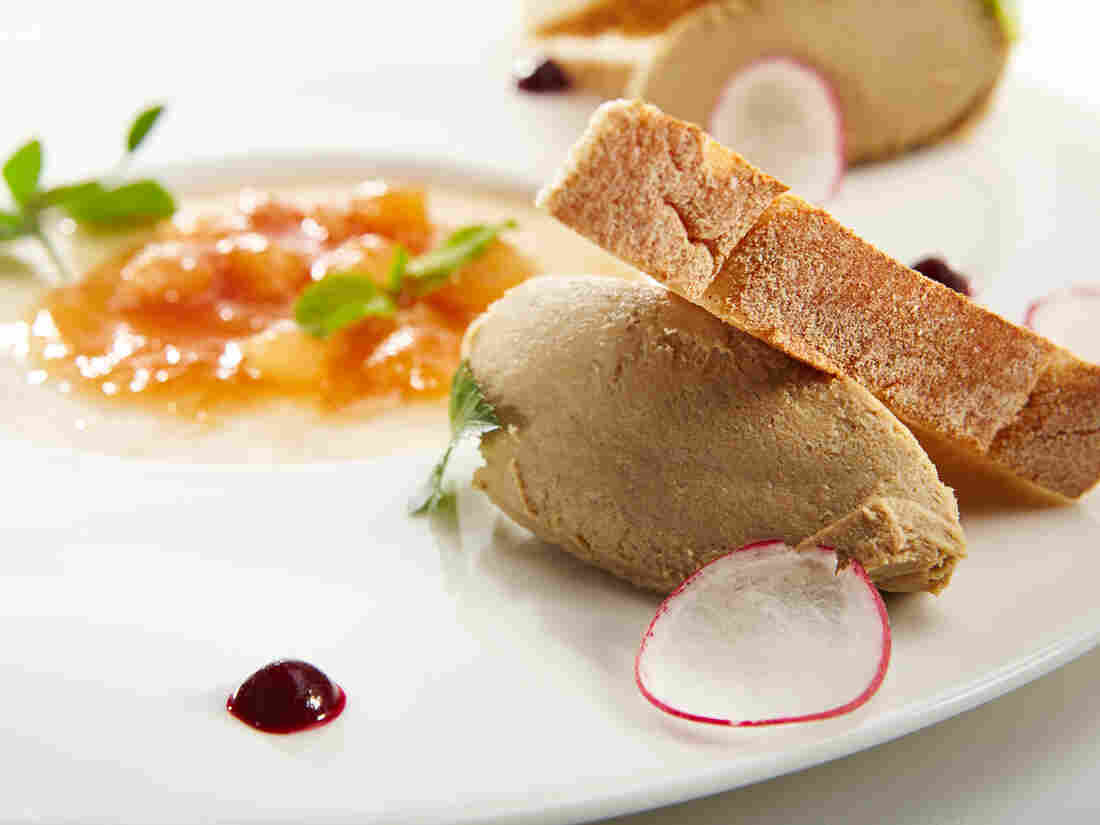 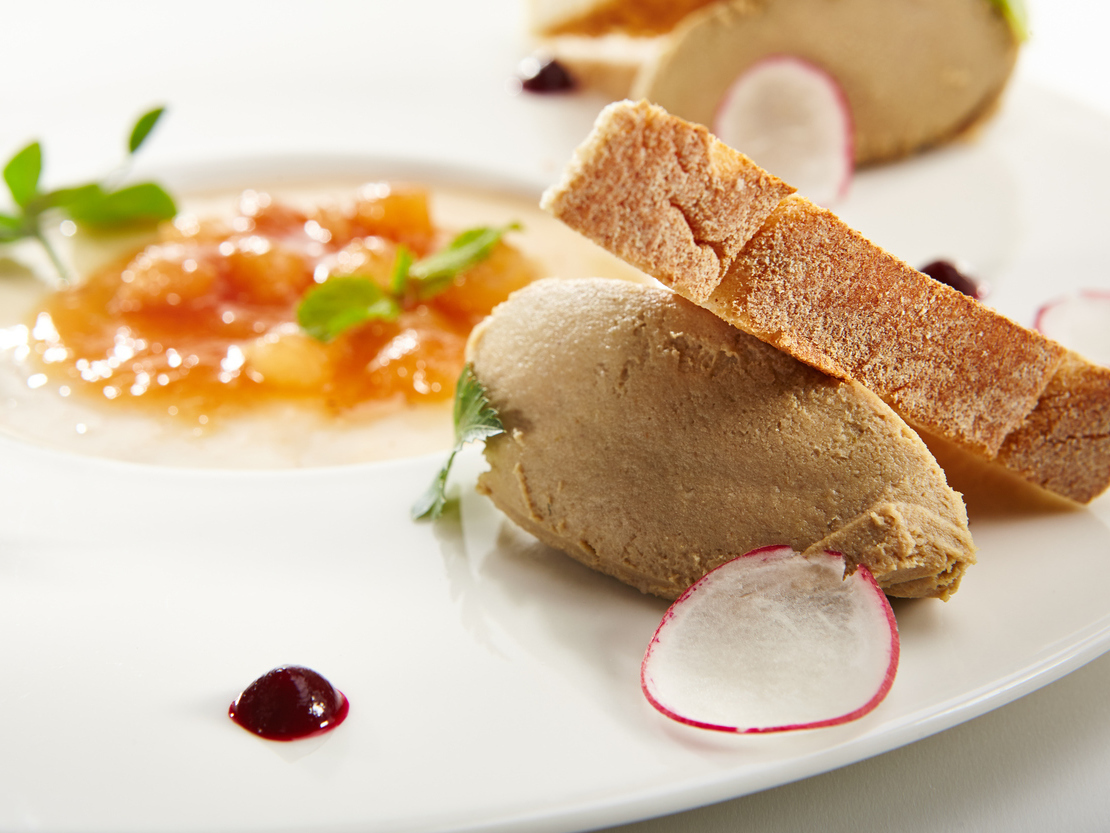 A year ago this month, animal activist Paul Shapiro sat in the offices of the Hampton Creek food technology company in San Francisco and put a forkful of foie gras in his mouth.

This small act was a big deal. Shapiro, at the time the vice president of farm animal protection at the Humane Society of the United States, hadn't eaten meat or any animal product for decades. And the fatty duck liver, considered a delicacy, is notoriously associated with forced feeding of ducks, a process which grossly increases size of the liver and causes suffering and sometimes death. It is an illegal procedure in California.

Shapiro's forkful of food was foie gras with a difference, though. It had been grown from avian starter cells taken in a quick and painless muscle-biopsy procedure from a living duck. Just like with "clean" hamburgers (using bovine starter cells), this is cellular agriculture: real meat grown in a laboratory without any need for animal slaughter.

In his book Clean Meat: How Growing Meat Without Animals Will Revolutionize Dinner and the World, hitting the shelves Tuesday, Shapiro describes what happened next: "As I closed my eyes and let the fatty liver melt on my tongue, the Hampton Creek foie gras brought me an amount of pleasure I'll confess I was a little embarrassed to admit."

That experience — or a parallel one of eating clean beef or chicken — isn't available to the rest of us yet. Costs of making clean meat are still high, and some technological bugs in the step-by-step processes of cellular agriculture still have to be fully worked out: for example, finding animal-free growth serum appropriate for each type of meat. As Shapiro describes, though, at the rate things are going, it's likely that within just a few years in the U.S. we will be able to buy at a reasonable price genuine meat that altogether bypasses (except for those starter cells capable of generating literally tons of meat) involvement of animals.

Acellular agriculture is underway, too. In this case, not even muscle biopsies are needed for starter cells: The product is "brewed" from yeast or other microbes. Take cow's milk, for an example. The first step is to order from a research company online the DNA sequence that makes up cow's milk proteins (who even knew this was possible!) Then, as Shapiro explains:

"With the DNA in hand, you insert it into yeast using a chemical or electrical stimulus. From there, the yeast does all the work, pumping out the proteins you coded it to, similar to how brewer's yeast pumps out alcohol."

Shapiro skillfully differentiates between the cellular and acellular pathways, noting that each gets us to the same place — a real meat or dairy product — just using different starting materials.

And he keeps both of those distinct from the creation of plant-based proteins that are already available, such as the "Impossible Burger" now sold in restaurants, which contains only plants, no meat at all.

Though going in I knew something about clean meat, and even mentioned it in offering my own thinking about the future of food, I learned a tremendous amount from Shapiro. I'd had no idea how many different "clean" products are realistically close to a market debut, including clean beef (Hampton Creek and Memphis Meats), clean egg whites (Clara Foods), even clean leather for clothing and accessories (Modern Meadow).

Will consumers embrace these products, or resist them? That's a major unknown that could potentially turn into a major stumbling block for these food-technology initiatives.

Over the weekend, I asked Shapiro how he would respond to people who, hearing the term "clean meat," insist they'd never eat it because they prefer natural foods. He replied via email: "When you actually think about just how unnatural, inhumane and unsustainable current meat production is, growing clean meat without animals seems like the naturally preferable option."

On this same point, in Clean Meat Shapiro quotes his long-time colleague and friend, Bruce Friedrich of the Good Food Institute, who minces no words:

"The vast majority of the population is eating feces-tainted meat from animals who were pumped full of drugs and treated in ways that would be considered criminal animal cruelty if committed against dogs or cats. Clean meat is the alternative to that meat."

By design or by coincidence, Friedrich also has a book out Tuesday, co-written with Kathy Freston. Clean Protein: The Revolution that will Reshape your Body, Boost Your Energy — And Save our Planet focuses not on clean meat but on the health benefits of avoiding meat altogether in favor of plants.

It's a myth, Freston and Friedrich remind us, that protein is found only or primarily from animal sources or is difficult to find eating a plant-based diet: "As long as you eat a normal amount of calories with a variety of plant foods, you will receive all the protein you need — not to mention a wealth of life-extending nutrients."

Together, clean meat and plant protein make a formidable combination for the future of food because they both move us away from the harms to animals, to our health, and to our planet as a whole of conventional animal agriculture.

To my mind, what's elating about clean meat specifically is that it will invite consumers who just can't quit meat, including in the developing world where whole sectors of the population are just able to afford meat for the first time, to try something better — at least if they're open to trying something new and lab-grown.

Shapiro says that it will be akin to the ending of large-scale whale slaughter by the U.S. whaling fleet in the years following the invention of the kerosene lantern. In the mid-1800s, around 8,000 whales annually were killed in seas around the world by that fleet, largely because whale oil was used so heavily for lighting; after kerosene was commercialized, the U.S. whaling industry went "from hegemony to irrelevance."

Is Shapiro right? Will clean meat considerably shrink the size and impact of animal agriculture in the years to come? I believe this is a realistic possibility.

It's an incredibly promising and hopeful message with which to kick off 2018.