Accessibility links
Is This Gorilla Mother Consciously Protecting Her Baby From Infanticide? : 13.7: Cosmos And Culture In response to a report of "heroic" behavior by a female mountain gorilla aiming to protect her baby, anthropologist Barbara J. King explores questions of conscious awareness of infanticide in apes.

Is This Gorilla Mother Consciously Protecting Her Baby?

Is This Gorilla Mother Consciously Protecting Her Baby? 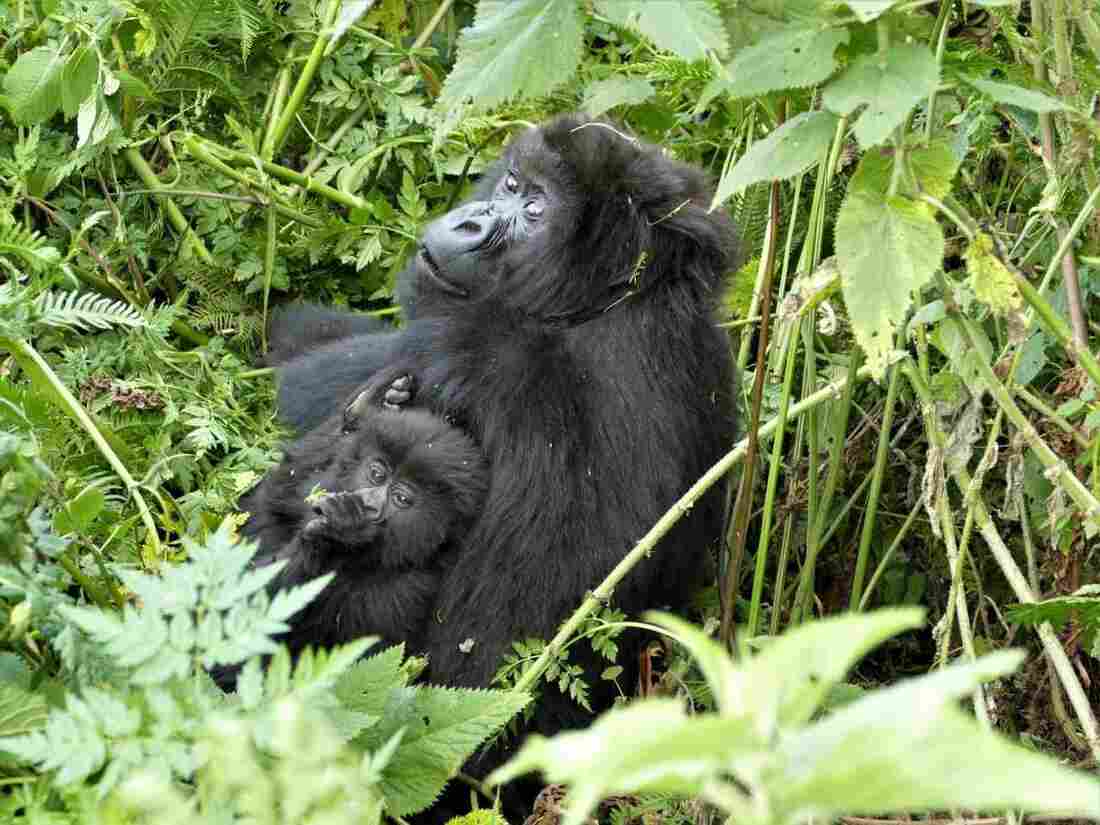 Pasika and her infant have been traveling alone for more than seven months. Dian Fossey Gorilla Fund hide caption 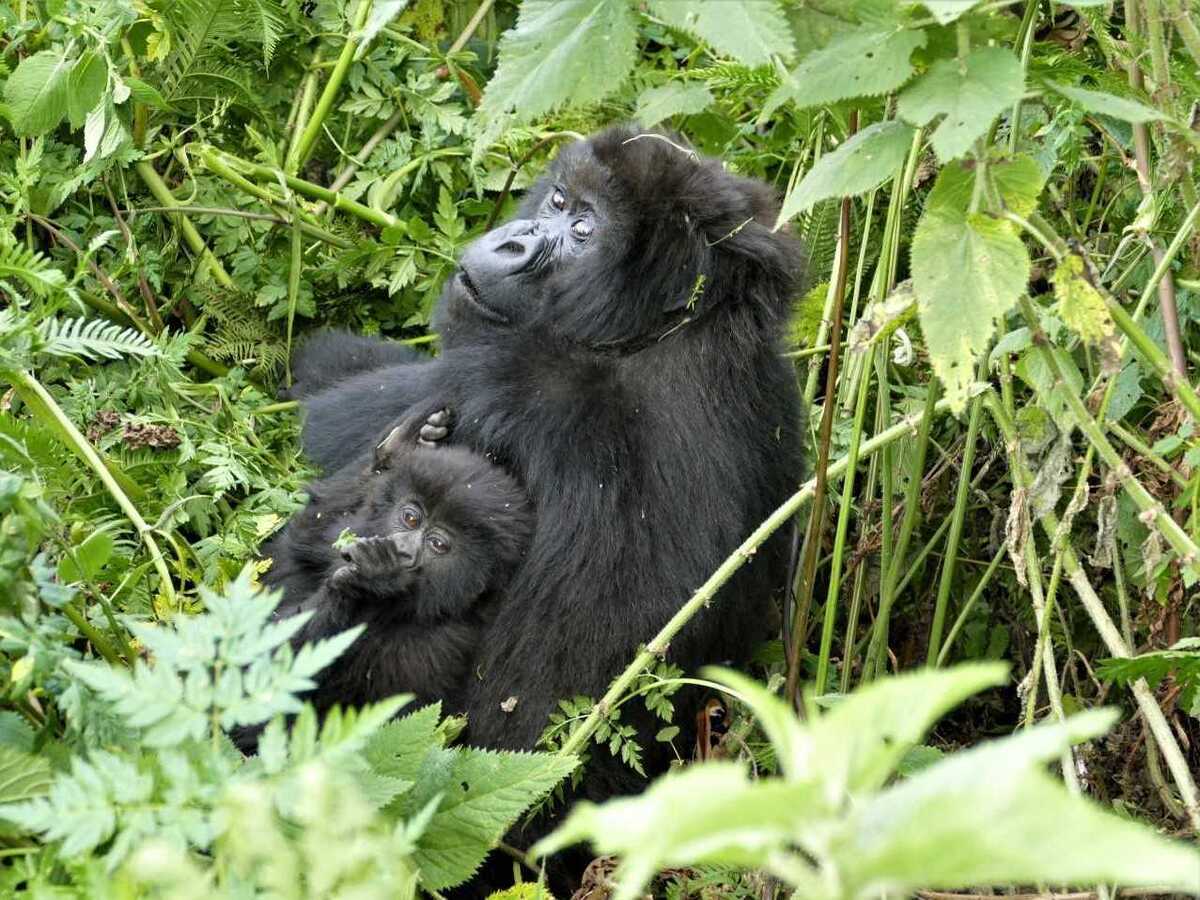 Pasika and her infant have been traveling alone for more than seven months.

In a post published by the conservation organization Dian Fossey Gorilla Fund International (DFGFI) last month, the behavior of a mountain gorilla female in Rwanda was described in striking terms.

The 26-year-old female, named Pasika, has been traveling alone with her baby for more than seven months in Rwanda's Virunga mountains, ever since her social group fell apart at the death of its silverback leader. Her infant, Mashami, is now one year old.

The post described Pasika's behavior as a "heroic," conscious choice, made because Pasika understands the risks of infanticide by gorilla males. She wants to protect her infant from these risks, in other words.

In the world of animal-behavior science, this is pretty much an astonishing claim.

Is there good scientific reason to conclude this level of awareness and decision-making on Pasika's part?

In considering this question, let's start by unpacking infanticide. The killing of infants by adult males is observed in a wide variety of species and understood as an evolved reproductive strategy. When a suckling mammalian infant dies and nursing stops, the mother resumes ovulation. This means she is soon fertile again and thus may be impregnated by the infanticidal male. Infanticide may reward males genetically, then, as their reproductive success may increase.

Of course, there's a tremendous cost to females of infanticide. Even keeping aside considerations of grief felt for her dead baby, there's a loss of reproductive investment — an eight-month gestation, birth, and lactation. It'd be surprising if the behavior of gorilla females didn't evolve to counteract the risks of infanticide, for example by rewarding a female's tight bonding with protector males and perhaps with other group members.

Here's the key point: There'd be no necessary reason why females would be thought to deploy a conscious anti-infanticide strategy. Behavior often evolves when it provides genetic payoffs, without it being thought through step by step.

So why does the DFGFI suggest that Pasika is thinking it through?

I asked DFGFI's Tara Stoinski. She's the group's president, CEO, and chief scientific officer — and has extensive experience in gorilla research. Via email, she said:

"With very rare exception, a female will not transfer groups when she has an unweaned infant because it will be killed. What is driving this avoidance behavior — conscious decision versus instinct — is unknown.

However, what makes Pasika's situation particularly intriguing is that her behavior is very atypical for the species and comes just after she lost her previous infant in a similar situation. In 50 years of watching this population, we have never seen a female actively avoid joining a group for this length of time. The general pattern when females are put in a situation like Pasika's is that they join a group either immediately or within a few weeks and their infant is subsequently killed. Pasika has now been on her own for more than seven months and is staying near but actively avoiding being discovered by groups.

We also know that Pasika has both observed a group mate have her infant killed after they both transferred into a new group, and Pasika also experienced the loss of her own infant soon after she transferred into a group. In this latter case, which was the infant she had just prior to Mashami, we did not recover the body and so cannot say with certainty that it was infanticide. But we know she had the experience of losing an offspring soon after joining a new male."

Stoinski's points are fascinating because they are rooted in two sources of data at two different scales: long-term knowledge of female gorilla behavior in this population (50 years!) and life-history information about Pasika herself. That's powerful.

Still, are the claims about Pasika going too far?

I posed this question to one of my go-to sources about the evolution of reproduction. Biological anthropologist Holly Dunsworth at the University of Rhode Island told me this by email:

"We all agree that gorillas are conscious, but 'conscious decision' can't help but suggest there is human-like strategizing, using abstract reasoning and imagination of future possibilities and how to avoid them or achieve them, weighing the merits of doing this against doing that in the process.

I recently dug deep to try to figure out whether apes could know that sex makes babies — something so obvious to humans that we narrate animal behavior as if they know all about what sex is 'for.' I couldn't come up with any evidence that they could make that connection; it's best to assume that they cannot." [See Dunsworth's piece from 2016 in Scientific American]

As Dunsworth wrote last year in Aeon magazine: "Animals have sex for a smorgasbord of immediate reasons, including pleasure, yet no species knowingly has sex for procreation except us."

The notion of human uniqueness in this particular context fits neatly with the evidence across species, she told me:

"Believe me, the more exciting discovery would be that [apes] could know the birds and the bees, so I would be so happy to report otherwise if I could. On the other hand, it frames a lovely way to think about humans having a unique understanding of kinship and connectedness."

Getting back specifically to the case of Pasika, Dunsworth added: "Now when I read about behaviors like Pasika's I'm especially curious and so I'm naturally a bit flummoxed by the ambiguous, to me, scientific language that's used to describe it."

Like Dunsworth, I'm intrigued if not convinced on the question of Pasika's conscious awareness regarding infanticidal risk, and I'm wary of DFGFI's direct analogy between Pasika and women:

"Just as her human female counterparts around the world have stepped up to the plate this year to advocate for themselves and their families, it is clear that Pasika recognizes the risks transferring poses to her infant, and is avoiding doing so with extreme determination."

Skepticism in science is a good thing, and it can be highly collegial, too. In corresponding with her, I saw clearly that Dunsworth admires the work of the DFGFI, as do I. Its daily protection of mountain gorillas is especially amazing — and demonstrably effective.

Whatever the explanation for Pasika's unusual behavior, we know that gorillas are smart apes who sometimes surprise us with their ingenuity. And we can wish Pasika and Mashami well. I'll be on the lookout for updates.

Update: On Jan. 12, The Dian Fossey Gorilla Fund published an update on Pasika on its website. According to the group, Pasika has joined a new, lone silverback male. The group has not located Pasika's infant, Mashami.