Accessibility links
Scientific Theory And The Multiverse Madness : 13.7: Cosmos And Culture An increasing number of theoretical physicist think that our universe is only one among infinitely many — but this speculation is not based on sound logic, says guest commentator Sabine Hossenfelder.

Scientific Theory And The Multiverse Madness

Scientific Theory And The Multiverse Madness 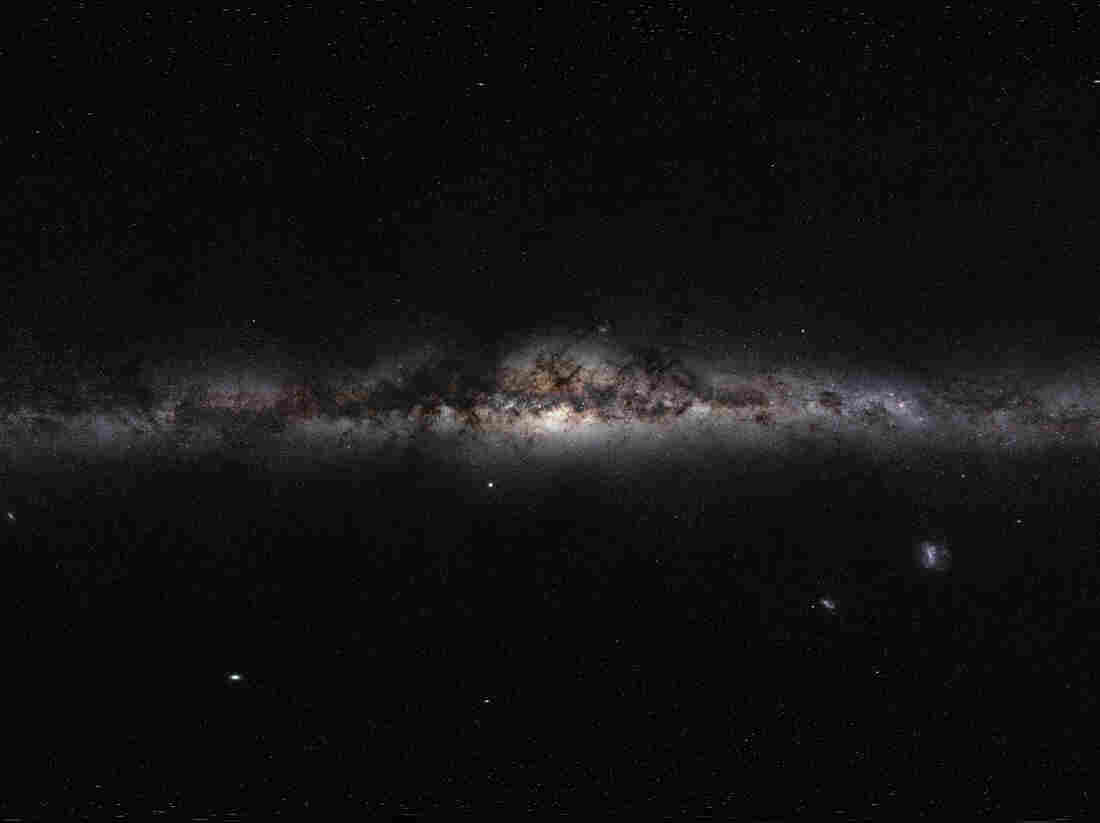 The plane of the Milky Way Galaxy, which we see edge-on from our perspective on Earth. The projection used in ESO's GigaGalaxy Zoom project gives the impression of looking at the Milky Way from the outside. Serge Brunier/ESO hide caption

The plane of the Milky Way Galaxy, which we see edge-on from our perspective on Earth. The projection used in ESO's GigaGalaxy Zoom project gives the impression of looking at the Milky Way from the outside.

Sabine Hossenfelder is a research fellow at the Frankfurt Institute for Advanced Studies in Germany. Her research focuses on general relativity and quantum gravity. She is author of the blog Backreaction and her first book, Lost in Math, is set to appear in June. You can find her on Twitter at @skdh.

Newton's law of gravity — remember that? The force between two massive bodies decreases with the inverse square of the distance and so on?

To use it, you need a constant, "Newton's constant," also called the "gravitational constant," usually denoted G. You can determine G to reasonable accuracy with a few simple measurements.

Once you have fixed the gravitational constant, you can apply Newton's law to all kinds of different situations: falling apples, orbiting planets, launching rockets, etc. All with only one constant!

This ability to explain many superficially different processes is what makes natural laws so powerful. Newton's contemporaries were suitably impressed.

After Newton came up with his equation, he could have reasoned: "Since I don't know this constant's value but have to measure it, the constant could have any value. So, there must be a universe for each different value. I conclude that we live in one of infinitely many universes – one for each value of the gravitational constant. I will call this collection of universes the "multiverse.""

But he didn't. Newton was famously minimalistic with his assumptions and even refused to speculate whether there were deeper reasons for his law of gravity, arguing this was unnecessary. "Hypotheses non fingo," he wrote, "I feign no hypotheses."

But that was then.

Today, the idea that we live in a multiverse has become popular in the foundations of physics. The multiverse collects all universes in which the constants of nature — Newton's constant and about two dozen more — can take on any value. Each combination of constants is realized in infinitely many universes.

And not only the constants can change from one universe to another, the locations of particles relative to each other can also be different. Since there are infinitely many universes in which to arrange the particles, some of these universes will be very similar to our own, just that eventually some initially tiny deviation will lead to an alternative history. Thus, somewhere in the multiverse our lives play out in any which way you can imagine. In this case, in some other universe, Newton could have, indeed, invented the multiverse.

But before you pack your bags and search for a universe more to your liking, let me add there's no way to cross over into another universe or even interact with one. This only works in science fiction. Indeed, to my taste, the multiverse itself is already too close to fiction.

Many theoretical physicists have argued the conclusion that we live in a multiverse is based on sound scientific reasoning. But that isn't so — and I will tell you why.

The purpose of science is to explain observations. In theoretical physics, we use mathematics for that. Our theories need a set of assumptions plus a way to identify math objects with observables. But none of the assumptions should be unnecessary, a criterion known as Ockham's razor (named after the 13th century theologian and philosopher William of Ockham). Ockham's razor is extremely important — as without it you could literally add invisible gods and angels to any scientific theory.

For centuries, progress in the foundations of physics has been characterized by simplification. Complex processes — such as the multitude of chemical reactions — turned out to arise from stunningly simple underlying equations. And simplicity carried us a long way. According to physicists' best theories today, everything in our universe emerges from merely 25 elementary particles and four types of forces.

So, yes, simplicity — often in the form of unification — has been extremely successful. For this reason, many physicists want to further simplify the existing theories. But you can always simplify a theory by removing an assumption. Like the assumption that the gravitational constant has a some value that you inferred from observation (up to some precision). Or similar assumptions about, say, the values of the masses of elementary particles, or the cosmological constant, or the strength of the four forces. These are assumptions some theoreticians are now throwing out.

If Ockham could see what physicists are doing here, he'd pray for God to bring reason back to Earth. You should remove unnecessary assumptions, alright. But certainly you shouldn't remove assumptions that you need to describe observations. If you do, you'll just get a useless theory, equations from which you can't calculate anything.

These useless theories which lack assumptions necessary to describe observations are what we now call a multiverse. And they're about as useful as Ockham's prayers.

Since you cannot calculate anything in the multiverse, the assumptions which physicists removed must then be replaced with something else. That "something else" is a probability distribution on the multiverse, which tells you not what we do observe, but what we are likely to observe. But it is simpler to assume a constant than an infinite number of universes with a probability distribution over them. Therefore, Ockham's razor should shave off the multiverse. It's superfluous. Unfortunately, this argument carries little weight among many of today's theoretical physicists who value the multiverse because it excuses boundless speculation.

There are a few cases where the invention of an infinite number of new universes gives rise to observable consequences. Everyone's favorite example is that our universe might, in the past, have collided with another universe, leaving correlated rings in the cosmic microwave background (see here). Another idea suggests that if we live in a multiverse, certain types of black holes are more likely (see here). But if such predictions are not confirmed, then this merely means we do not live in a multiverse with these particular properties.

Let me also add that these examples of "predictive" multiverses are ad hoc constructs invented for the very reason of convincing skeptics that some types of multiverses can have observable consequences. Don't fall for it. Just because a theory is falsifiable doesn't mean it's scientific. For a theory to be scientific its predictions must also have a reasonable chance to accurately describe reality. Construing up one of an infinite number of multiverse variants has no reasonable chance.

Theoreticians justify their multiverse research by claiming that it continues the noble quest for simplicity. But as we have seen, this argument is wrong because it neglects the need to introduce a probability distribution on the multiverse. The multiverse replaces a simple explanation with a more complicated one. Such a move is only justified if the added complication explains additional data, but for the multiverse that isn't so.

Why then has the idea become popular? A cynic may argue it's because the multiverse offers infinitely many new opportunities for paper writing. But I don't want to feign hypotheses.

Let me thus stick to the facts: To our best knowledge, assuming the existence of any universe besides our own is unnecessary to explain anything we have ever observed. In the best case, then, the multiverse is an interpretation.