Accessibility links
'The Marvelous Ms. Maisel': Science, Comedy and Genius : 13.7: Cosmos And Culture In addition to its beautiful costumes and sweet homage to the New York City of the 1950s, the show offers an opportunity to reflect on the nature of genius, says commentator Adam Frank. 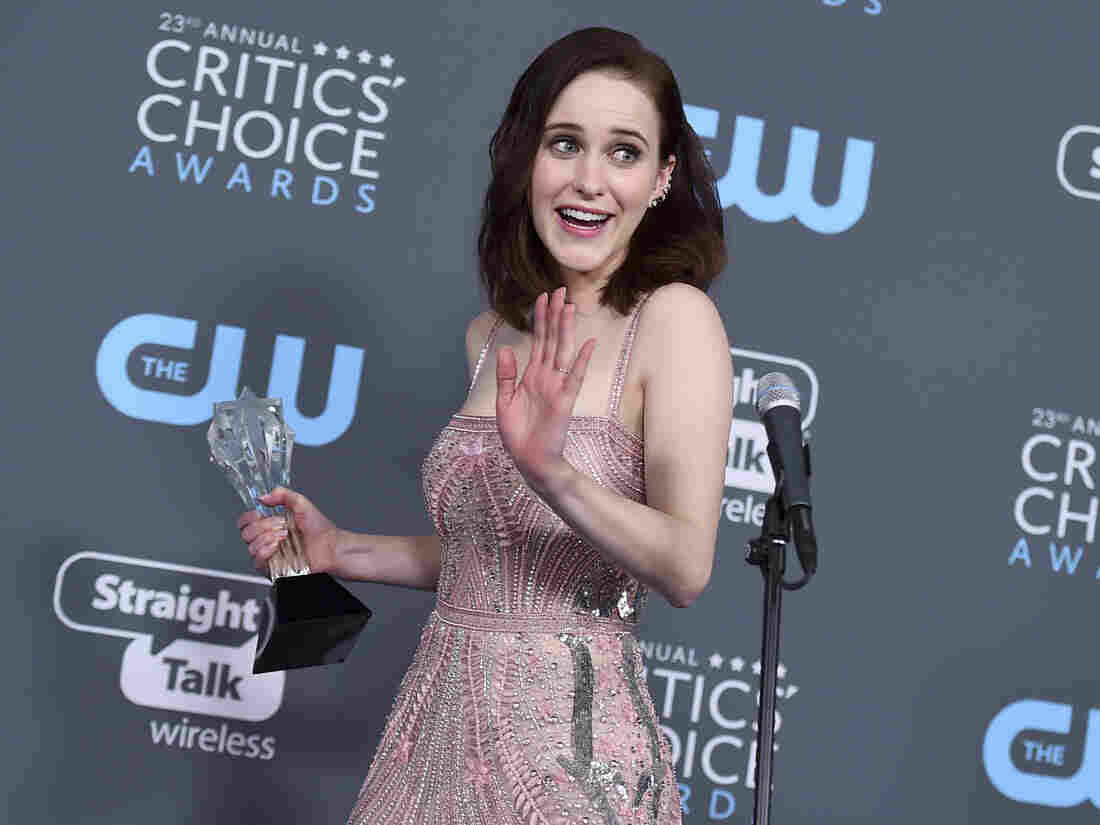 Rachel Brosnahan wins the award for best actress in a comedy series for "The Marvelous Mrs. Maisel" at the 23rd annual Critics' Choice Awards at the Barker Hangar on Jan. 11 in Santa Monica, Calif. Jordan Strauss/Invision/AP hide caption 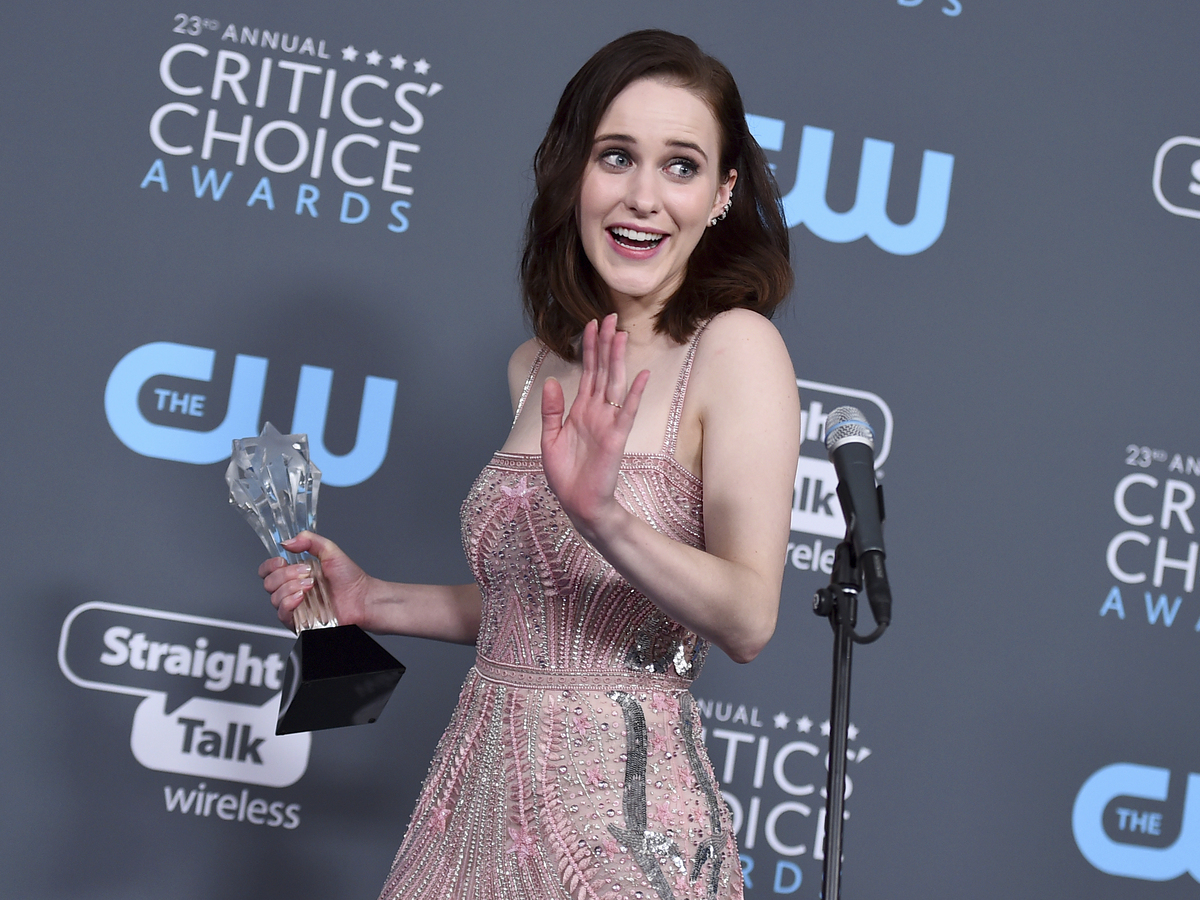 Rachel Brosnahan wins the award for best actress in a comedy series for "The Marvelous Mrs. Maisel" at the 23rd annual Critics' Choice Awards at the Barker Hangar on Jan. 11 in Santa Monica, Calif.

Over the past few months, the Amazon drama-comedy The Marvelous Mrs. Maisel has been the show everyone loves to talk about.

If you don't believe me, here are five separate NPR stories on different aspects of Mrs. Maisel — 1,2,3,4,5.

After recently finishing the series, I am now a convert, too. It's not just brilliant, it's brilliant in a bunch of different ways: characters; story; dialogue; and costumes — just to start.

For me, as a scientist, one of the ways it's specifically brilliant is its exploration of the human capacity for genius, that rare flash of excellence and what its possession demands. Whether its science, art, or comedy — genius just happens. An invitation to consider those happenings, is one of the gems The Marvelous Mrs. Maisel offers.

Mrs. Maisel follows an upper-middle class Jewish housewife, Miriam Maisel (Rachel Brosnahan), in 1950s New York City. The story opens with her husband (who works for a chemical company) pursing his dreams of comedy stardom with Maisel dutifully supporting him. But after bombing at a Greenwich Village club's open-mike, the husband announces that he's leaving Maisel for his secretary. Later that night Maisel returns, drunk, to the club and takes over the stage delivering a brilliant, scathing, impromptu monologue on men, marriage, sex and fidelity.

The club's sharp-tonged manager Susie Myerson (in an epic performance by Alex Borstein) is someone who has seen it all. That's why she knows exactly what she's seeing in Maisel's tirade. Genius — pure, unadulterated, comedic genius.

From that point on, the balance between craft, technique and inspiration that lies at the root of genius becomes a theme of the show. Myerson takes Maisel on as her manager, setting her on a path to learn the basics of the stand-up trade. At one point Myerson, for example, sets Maisel up to bomb so she can understand what that means.

Later, in one of the shows more interesting segments, we see the pair slowly work through Maisel's set, refining the jokes night after night until she has a "tight 10" (an opening that's 10 minutes of solid laughs).

That emphasis on craft was, for me, one of the most beautiful, small aspects of the show. A big part of my job as a scientist is teaching graduate students who are trying to climb their own ladder to excellence. From a distance, science can be one of those places where full-fledged practitioners just seem to exist in a state of grace, of fully accomplished understanding. But, in truth, the ladder is made of a thousand small steps — and missteps. So often we only see people who are great in their fields as finished products. But teachers (and now the viewers of Mrs. Maisel) get to watch the difficult, and yet astonishing process, of the students assembling themselves into accomplishment.

But the show offers something more than just a tired trope about "genius is 1 percent inspiration and 99 percent perspiration." Instead, it also unpacks the capacity for genius to simply erupt unbidden with all the chaos that can follow. I don't want to give away plot details but, more than once, Maisel's raw talent for stand-up makes its appearance, not in a well crafted, finely honed "tight-ten," but as an on-stage inspiration that wells up out of her. And, more than once, that eruption sweeps away finely crafted plans and hopes.

Genius originally meant a spirit that would inhabit a person. It was something other, something from the outside. I have been lucky to meet a few scientists in my life who had some share, some degree, of genius. They were like magicians. Their abilities, as native as breathing, were unlike anything I had seen from the other very smart people I encountered. And for some of them, that spirit of genius did not make their lives easier.

So, try watching The Marvelous Mrs Maisel. Because, somewhere in there, right along with the blistering pace, laugh-'til-you're-crying dialogue, beautiful costumes and sweet homage to the New York of the 1950s, you'll find an opportunity to reflect on Albert Einstein, Isaac Newton and, of course, Lenny Bruce.