Accessibility links
Science's 'Leaky Pipeline': Why Women Leave Their Careers : 13.7: Cosmos And Culture There are many reasons women leave careers. It's not fair to assume they have not met the mark; some are making positive choices for more impactful, and varied, lives, says 13.7 guest Patricia Fara. 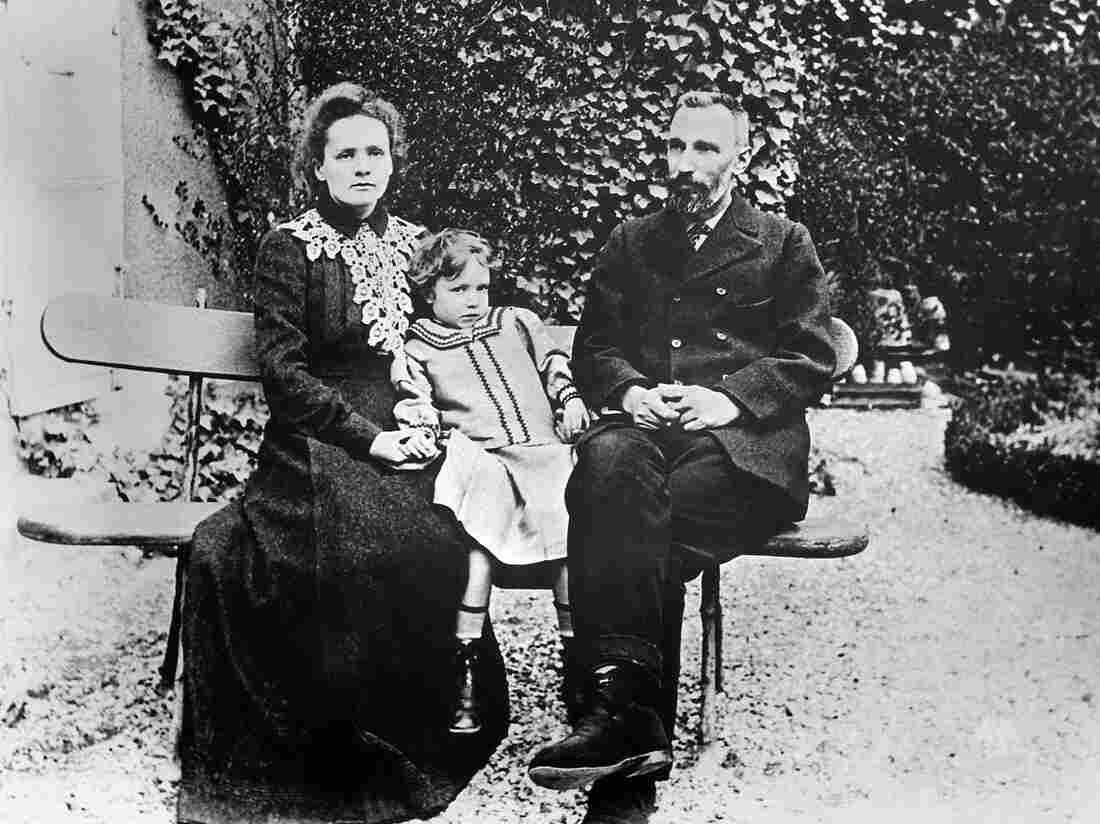 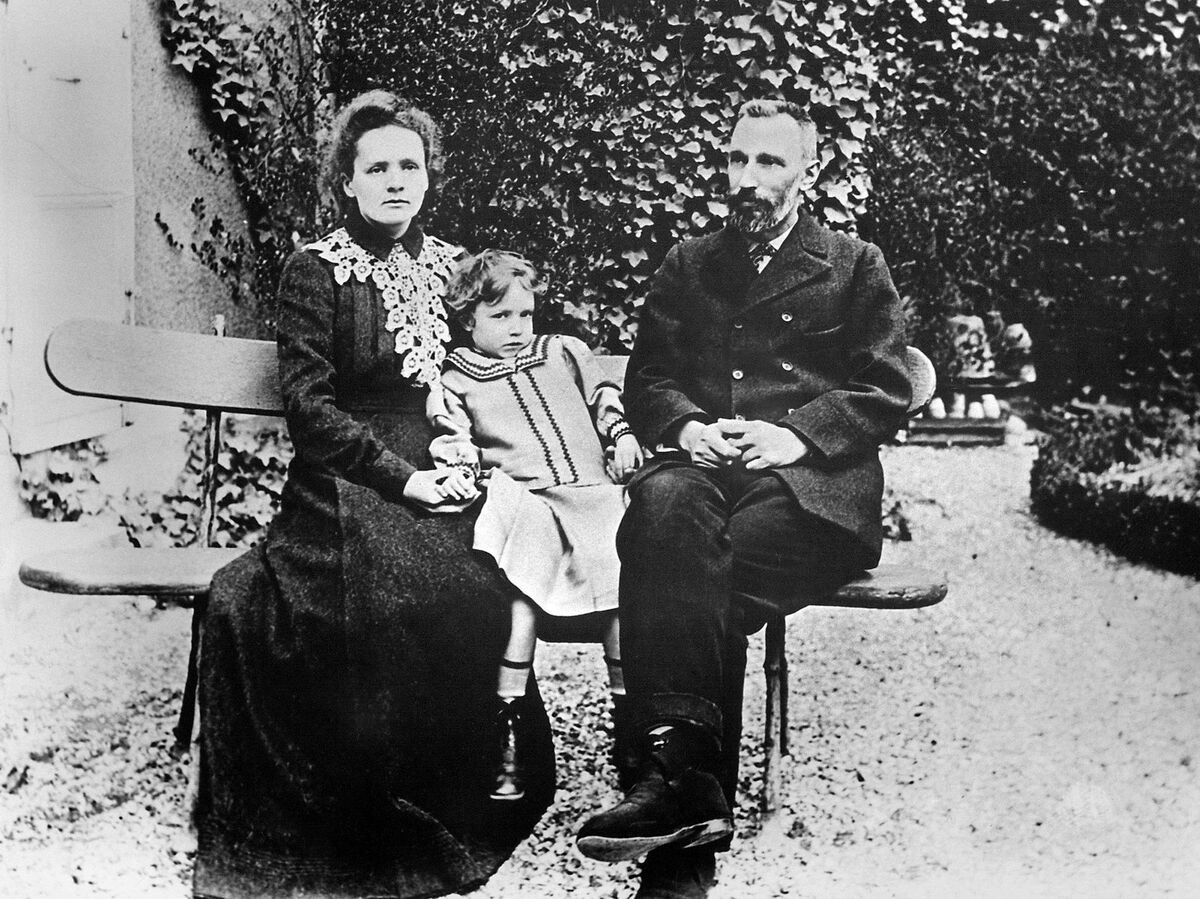 Marie Curie holds her daughter, Irene, for a photo in 1904 with husband Pierre in the garden of the Sevres Office of Weights and Measures in Sevres, France.

Patricia Fara is the president of the British Society for the History of Science and a fellow at Clare College, Cambridge, U.K. Her latest book is A Lab of One's Own: Science and Suffrage in the First World War.

I've got a degree in physics, but I have not stepped inside a laboratory since I graduated from Oxford.

According to statistical interpreters, I leaked out of the pipeline and joined the throngs of unsuccessful women who failed to leap over an early hurdle in their careers, let alone make it right to the upper echelons of science.

But is that a helpful way of thinking about equal opportunities?

That model of failure is based on two arrogant assumptions. Most obviously, it implies that scientific prowess represents the pinnacle of human achievement. I resent the notion that because I abandoned science, my life has been an insignificant almost-ran. I may not have contributed to discovering the Higgs particle or voyaging to another planet, but I am a senior university academic with a raft of single-authored publications.

The other concealed insult is the inference that I was squeezed out. On the contrary: I was offered full funding for a Ph.D., but had been so chronically bored for the previous two years that I had no intention of continuing with a subject that to me — an idealistic 21-year-old — seemed eminently doable but woefully unmeaningful.

These buried resentments crystallized while I was carrying out research for my new book, A Lab of One's Own: Science and Suffrage in World War I. One of my favorite characters is the suffrage leader Ray Strachey, who married into the fashionable Bloomsbury set but was scathing about the ability of Virginia Woolf and her colleagues to get anything done. After leaving Cambridge in 1908 with a degree in mathematics and an ambition to become an electrical engineer, Strachey decided that political activity was more important. She took advantage of her aunt's position as president of Bryn Mawr to examine the situation in America.

"The fashionable suffrage meeting in New York was very aggravating," she reported, "because the smart ladies were so remarkably silly, and yet thought they knew all about the subject."

Back in England, as soon as the war broke out, Strachey temporarily relinquished her campaign for the vote and dedicated herself to finding work for women. She set up a welding school, organized medical care, and sat on countless committees. She loved it. "I find this sort of work almost too fascinating," she enthused in a letter to her mother.

"Pippa [her sister-in-law] ... and I have wound ourselves into the very thick of the intrigues, and we found ourselves dictating the leading article of The Times one day and sitting up until 4 a.m. preparing draft schemes for Mr. Neville Chamberlain the next...I am packed so tight with interviews that I can hardly breathe, and find myself panting from one Cabinet Minister at dinner time only to breakfast with another the next day."

Technically a "leaky pipeliner," Strachey played a leading role in making it possible for female scientists to carry out research, to serve in hospitals, to lecture in universities. She never gave up her fight to secure equal pay as well as equal voting rights for women. But although she died long before anti-discrimination laws were passed, she enjoyed one great advantage denied to most modern ambitious women: money for child care.

Like Strachey, many of the women I wrote about were able to pursue independent careers even though they had children (and often a demanding husband as well). The mythology surrounding Marie Skłodowska Curie emphasizes her poverty and motherly self-denial, yet she recruited her father-in-law as the live-in help and had enough money to hire Polish nannies and send her two daughters back to Warsaw for a few months every year.

Today, the greatest single obstacle preventing talented, qualified women from obtaining top positions is the cost of bringing up a family. A new study in the U.K. found that universities with generous maternity leave programs were far more successful than their competitors at retaining female expertise and so recouping the investment in their training.

But children are for life, not just for Christmas. For those not blessed with grandparents or an inheritance, strategies are needed to address the multiple difficulties of coping when children are sick, on vacation, or come home midafternoon. Too often, because the female partner earns less — yet another iniquitous reality that has to be confronted — she is the one who sacrifices her career.

Even women not facing such domestic challenges sometimes prefer an exit route. My scientific suffragists of the early 20th century were devoted to their work, but they also enjoyed weekend trips away and lazy family vacations. Nowadays, being in charge of a laboratory or a university department routinely entails a 24/7 commitment, as though nothing else in life mattered.

Rather than being passed over for promotion or eased out of their responsibilities, some women are making positive choices for more varied lives with lower levels of pressure. Perhaps in time, the really smart men will realize that's a better option than earning more money but having no time to spend it.