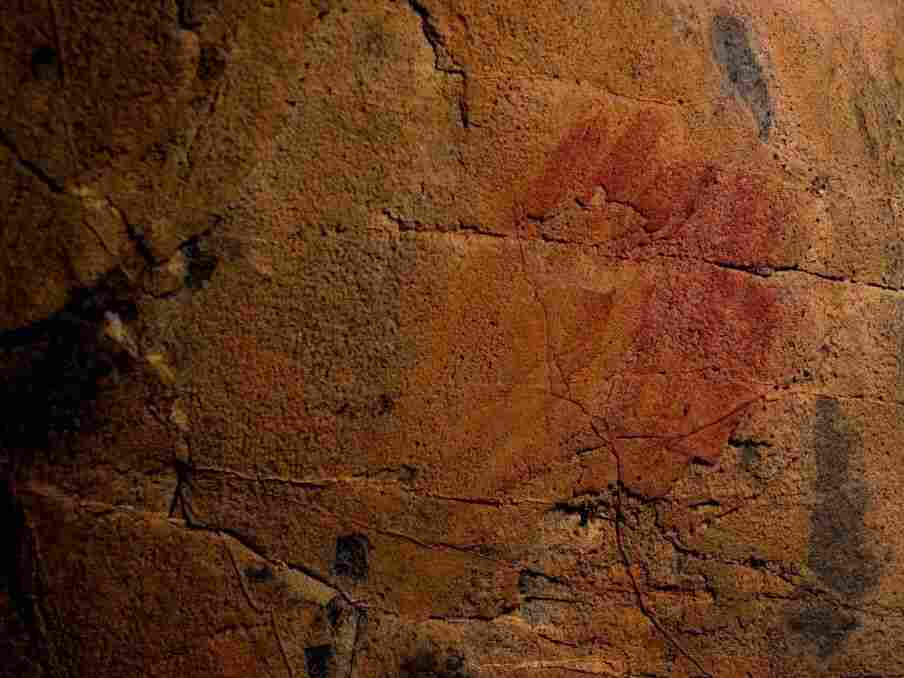 Picture shows what scientists say are Neanderthal cave-paintings inside the Andalusian cave of Ardales, on March 1, 2018. The cave-paintings, found in three caves in Spain, were created between 43,000 and 65,000 years ago, at least 20,000 years before modern humans are believed to have arrived in Europe. AFP/Getty Images hide caption 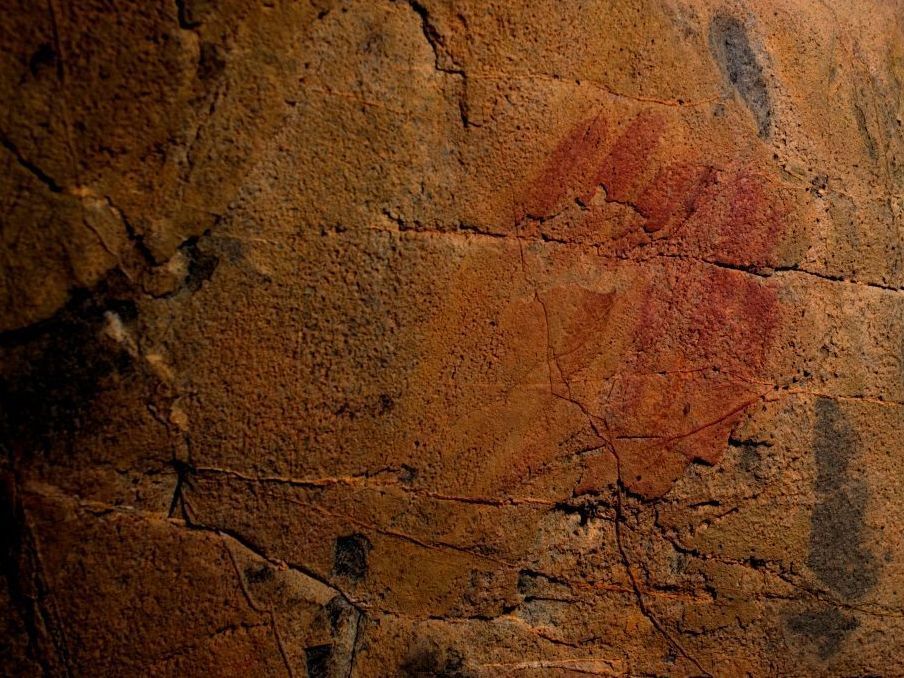 Picture shows what scientists say are Neanderthal cave-paintings inside the Andalusian cave of Ardales, on March 1, 2018. The cave-paintings, found in three caves in Spain, were created between 43,000 and 65,000 years ago, at least 20,000 years before modern humans are believed to have arrived in Europe.

At the end of last month, a team of research scientists announced that walls in three caves in Spain were adorned with art created by our evolutionary cousins the Neanderthals about 65,000 years ago.

That news, published in the journal Science, rang out worldwide as exciting, even revolutionary.

The art in question was previously thought to have been made by our own ancestors, Homo sapiens, but new dates obtained for the painting knocked that idea out of the running. At certain times and places in Europe and Asia, Neanderthals and early Homo sapiens overlapped, but modern humans only reached Spain about 20,000 years after this art was produced.

"Once upon a time, in the dim recesses of a cave in what is now northern Spain, an artist carefully applied red paint to the cave wall to create a geometric design — a ladder-shaped symbol composed of vertical and horizontal lines. In another cave hundreds of kilometers to the southwest another artist pressed a hand to the wall and blew red paint around the fingers to create a stenciled handprint, working by the flickering firelight of a torch or oil lamp in the otherwise pitch darkness. In a third cave, located in the far south, curtain-like calcite formations were decorated in shades of scarlet."

Yet only days before the announcement was made, a story had appeared in The Telegraph newspaper with a headline asking if Neanderthals' "poor art ability" contributed to their extinction. This idea was based on a researcher's suggestion that Neanderthals had poor hand-eye coordination.

Dismissals of Neanderthals as greatly inferior to our own ancestors — in day-to-day living and thinking, as well as in creating art — have been quite common over the years. For anthropologists and archaeologists who have steadily worked to overturn the myth of these hominins as brutish and stupid, the Spanish art is a particularly meaningful pointer towards Neanderthal cognitive and culture sophistication.

Neanderthals haven't just been dismissed, they have also been recruited for use as epithets on the basis of their perceived shortcomings. As science writer Carl Zimmer put it when reporting last week on the art discovery for The New York Times, "It's long been an insult to be called a Neanderthal." This practice has continued even quite recently, as we see in one media story after another.

Historical explanations can be found for why Neanderthals, early on, were portrayed in stereotyped terms: In 1911, a French anatomist, through a series of misconceptions (and preconceptions), mis-reconstructed a male Neanderthal skeleton from the site of La Chappelle aux Saints in France as shambling and stooped. This male looked downright dim. For decades, the image — now representing Neanderthals everywhere — stuck.

Evidence amassed over the last century, though, indicates that Neanderthals are symbolic thinkers. As I have written here before, it's a perfectly reasonable (if not 100 percent airtight) way of reading the evidence to conclude that Neanderthals carried out rituals in ways both symbolic and religious. When Neanderthal communities buried their dead with elaborate grave goods, often taken from the bodies of animals, they symbolically marked graves as meaningful places. Enacting those rituals may well have been a way for Neanderthals to connect to whatever, for them, was a sacred world.

Symbolism is represented, too, in the Spanish art. As Dirk Hoffmann et al. explain in their report in Science:

"Because a number of hand stencils seem to have been deliberately placed in relation to natural features in caves rather than randomly created on accessible surfaces, it is difficult to see them as anything but meaningful symbols placed in meaningful places."

Of course, the dating claims for this art require further scrutiny. As Christopher Joyce writes for NPR, the techniques used to date the art:

"...give a range of possible dates, rather than an exact time. And there was certainly overlap between modern humans and Neanderthals in Europe. If new evidence shows that humans actually arrived earlier than scientists now think, well, that's the pattern of science."

In the ongoing cultural conversation about Neanderthals, though, it's clear to me there's more going on than straightforward evaluation of the evidence. This "something more" has to do with boundary policing, I think.

Years ago I was struck by this sentence in a volume called Ape by John Sorenson written for a series on animals by Reaktion Books: "Apes fascinate us because they seem to transcend the human-animal border."

Chimpanzees, bonobos, gorillas and orangutans are socially and cognitively complex, Sorenson is saying here. They threaten the uniqueness, and I would add the superiority, we like to perceive in our own species.

And if apes — who don't make cave art and who don't bury their dead with community rituals — worry us, how much more must Neanderthals worry us?

Have, in fact, Neanderthals fully transcended the human-animal border? What would that mean for our understanding of our place in the world?

Or might the right question be something wholly different: Why do we modern humans persist in our keen attention to borders in the first place?

Might whales, to take but one example, be as cognitively and culturally with it as Neanderthals — or us?

Could we let ourselves go even farther?

What if we didn't try to slot each new piece of evidence from paleoanthropology or ethology into some competitive-rating system that essentially asks, are we superior? Are they?

What if, instead, we just drank in each new discovery, scrutinizing it (because that is what science does) and welcoming it as a way to revel in the fullness of the natural and cultural world, past and present?