Accessibility links
Hamburgers, Veggie Burgers And Gender : 13.7: Cosmos And Culture Meat and veggie burgers evolved together in the 20th century, but when it comes to associations with gender, their histories diverge. Anthropologist Barbara J. King explores a new book on the topic. 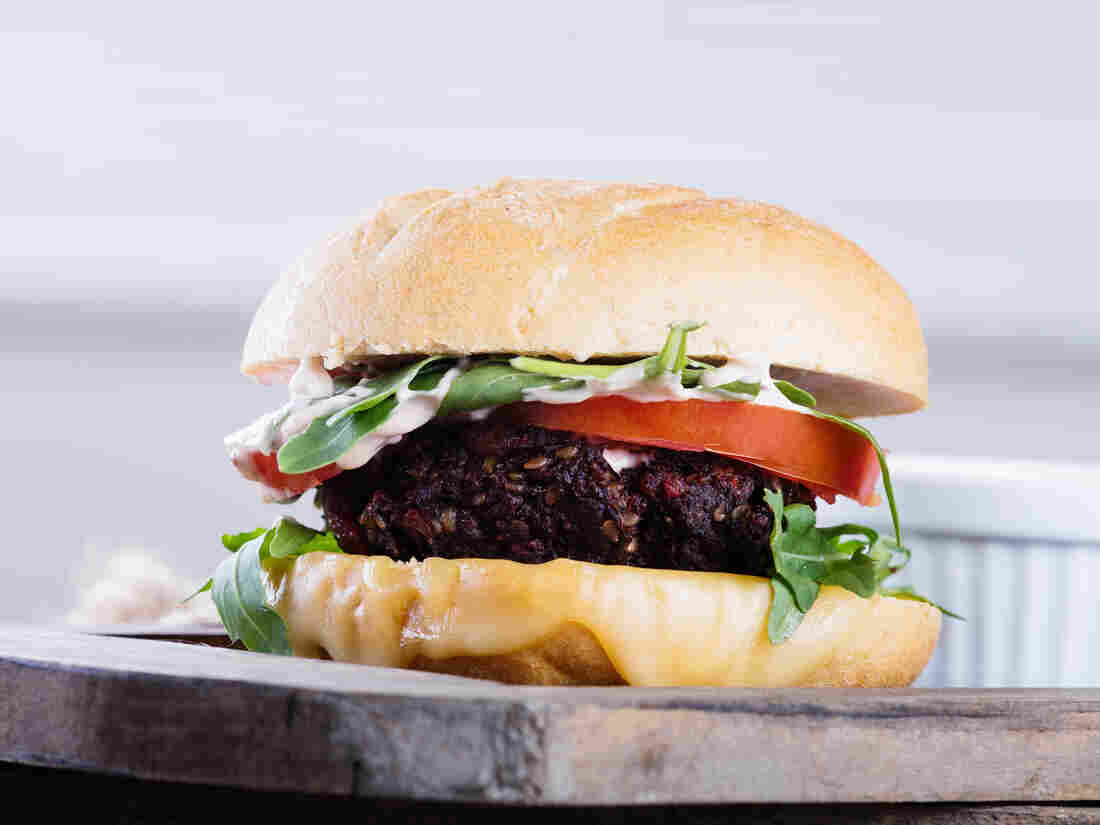 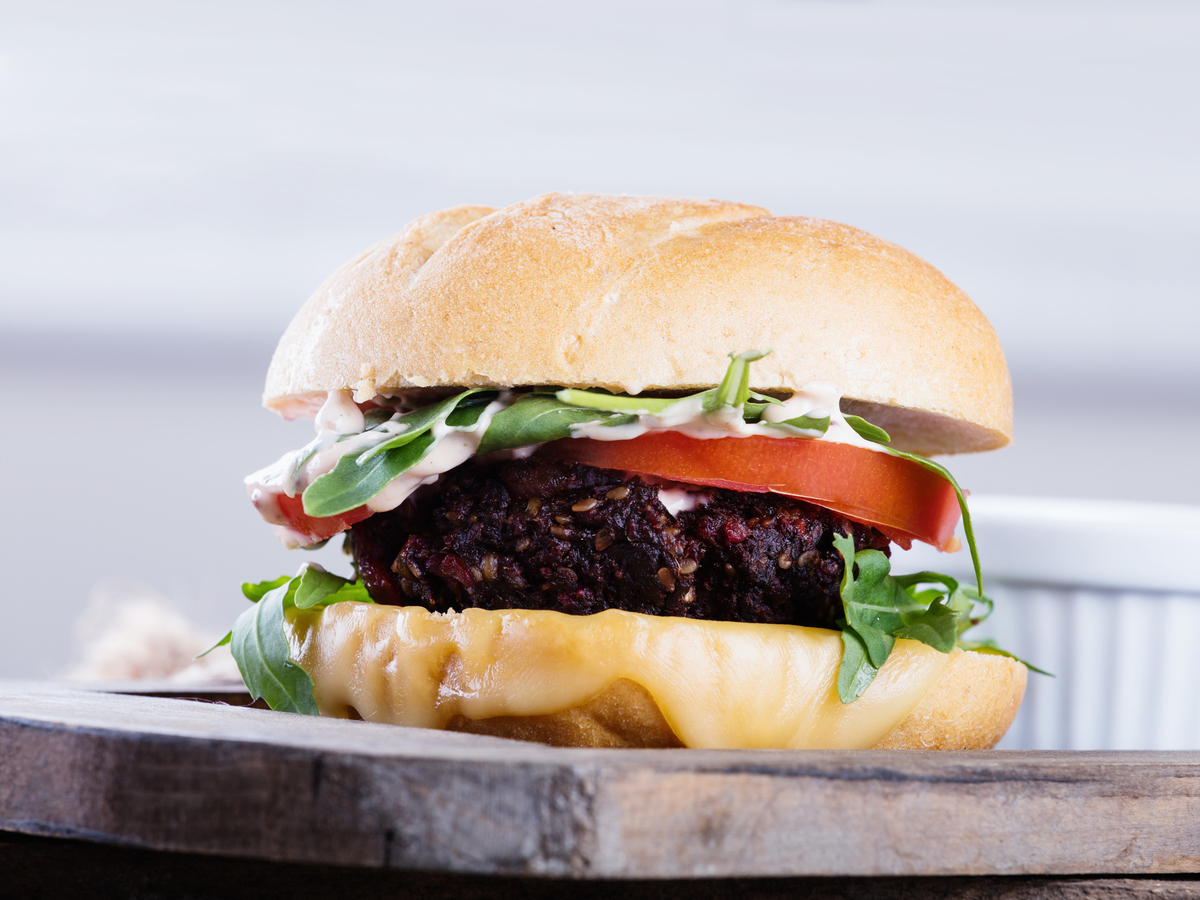 Consider this list of names for hamburgers that are now, or have been, on the market: Thickburger, Whopper, Big Mac, Big Boy, Chubby Boy, Beefy Boy, Super Boy.

Notice a pattern there?

Writer Carol J. Adams does. This list comes from her book Burger, published last month. As the hamburger business gradually grew over time, Adams explains, so did the size of the hamburger — and the gender associations.

Burger is a small book with a big punch. It's the latest in the Object Lessons series from Bloomsbury Publishing "about the hidden lives of ordinary things." The series also includes such titles as Remote Control and Jet Lag.

Adams, well-known for The Sexual Politics of Meat, makes Burger into a cultural history of food with a gender twist: 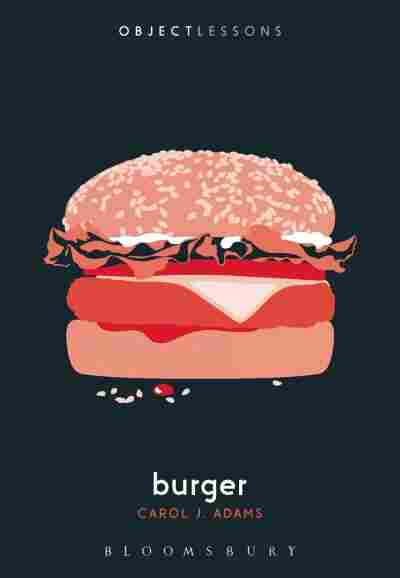 "Given the double entendre of big hamburgers standing in for erections, it is no surprise that some companies advertise their fare via women who can cram a hamburger, a Thick Burger, a Whopper, a Big Boy, etc., into their mouths. Carl's Jr. makes repeated use of this trope of a woman's mouth stuffed with burger. ... One advertisement for Hardee's demonstrated the size of their Monster Thickburger by showing a woman stuffing her fist into her mouth. Called 'Fist Girl,' it was dubbed 'BJ Girl' and 'Deep Throat' Burger on the web. These are not just fantasies of sex but of control and humiliation of women."

Adams approaches her topic as an animal rights advocate as well as a feminist. She reminds us what the "everyday object" of a hamburger really is: "The burger — minced, macerated, ground — is the renamed, reshaped food product furthest away from the animal."

In this way, taking into account the lives of cows, as well as women, Adams convincingly explores the "violence at the heart of the hamburger."

It's impossible to pinpoint the time and place where the hamburger originated. The first U.S. fast-food hamburger chain, White Castle, opened in 1921; the McDonald brothers opened their first burger drive-in in 1937. As early as 1885, though, people were offering at state fairs products that came close: meatballs between two pieces of bread in Wisconsin, a cooked sausage patty in New York.

Similar issues cloud the origins of the veggie burger. Recipes for vegetable cutlets and bean croquettes appeared in cookbooks at the turn of the 20th century. Even in the 1890s, food inventors with household name recognition — Kellogg, Post — were preparing meatless foods with seitan, nuts and soybeans. Later, meat rationing during World War II boosted this kind of experimentation.

Adams told me this by email:

"I think it is more plastic/flexible. Looking at the ads for non-meat burgers from the first half of the 20th century, or the articles in the New York Times or other papers discussing soybean and other veggie burgers (with recipes), I don't recall any gendering of the target audience.

There have been times more recently when the veggie burger ends up being gendered: An advertisement in the Vegetarian Times suggested that the great thing about a certain veggie burger was that one's husband would never know. This ad reinforced several assumptions about gender: 1) the wife was expected to cook, 2) the husband expected meat and 3) you should lie to your husband if you are feeding him a veggie burger(!).

On the other hand, recall that the "best" burger of 2015 for GQ (formerly Gentlemen's Quarterly) was a veggie burger. I am (metaphorically) holding my breath that those associated with the exciting plant-based meat products don't use advertisements that reinforce gender assumptions. So far, they haven't and that, in itself, is exciting."

In Burger, Adams writes: "Are we ever just eating? We are consuming interspecies history, environmental history, national history, and gender politics. A hamburger is never just a hamburger."

Could a veggie burger ever be just a veggie burger? Maybe not, but as the quality of plant-based burgers continues to rise in taste and texture, there's every chance of charting a new course, one freer of violence for all animals, including us.

Barbara J. King is an anthropology professor emerita at the College of William and Mary. She often writes about the cognition, emotion and welfare of animals and about biological anthropology, human evolution and gender issues. Barbara's latest book is Personalities on the Plate: The Lives and Minds of Animals We Eat. You can keep up with her on Twitter @bjkingape.