All Around the Kitchen [Multimedia Track] 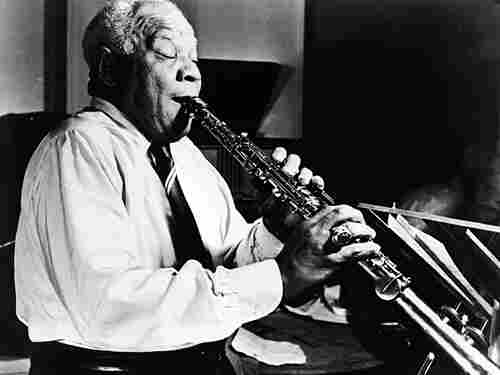 My boss readily admits that she doesn't know a whole lot about jazz. But she lets me write all this nonsense on the Internet, so I'm not complaining. And at least she's willing to learn. So every week, she and I get together to listen to and Instant Message about a different great jazz song.

It's officially summer now, and here in Washington, D.C., it's hot. So for this week, I pulled a favorite version of "Summertime": Sidney Bechet's 1939 interpretation, to be precise.

All Around the Kitchen [Multimedia Track]

-----
Boss Lady: I've never had sweet tea before, but this makes me want to sit on the porch, watch the heat ripple off the road and drink a tall, cold glass of sweet tea.

me: Once again, with the imagery.
What about this song, exactly, urges these admittedly appealing impulses?

Boss Lady: Don't you think the best music takes you to a place that's somehow normally inaccessible or hard to come by?

me: Emotionally and imaginatively, sure. I suppose that's another discussion, though. What do you hear that makes you want to imbibe cold beverages?

Boss Lady: Because the very opening riff, with the guitar sliding on those blue notes, reminded me of an early scene from the movie Cadillac Records. The Muddy Waters character is sitting outside in front of a shack on a hot, hot day playing his ragged guitar.
Then of course, the saxophone comes in and it's so impossibly sultry.

me: I like that ...
This is a Sidney Bechet track -- he's the soprano saxophonist and star
But I think the secret driving force behind this cut is the guitarist -- his name is Teddy Bunn.
And he's playing these immaculate, bluesy background licks the entire time, and/or interpreting the original melody

Boss Lady: Don't make fun of me, but I started thinking of Django Reinhardt
Why is that?

me: Well it's that same acoustic guitar sound and propensity to swing ...
Also, at this time in the music's history, guitarists weren't really soloists
They largely played rhythm, you know, that four-on-the-floor strum-every-beat thing -- and you hear a little of it here
But Django played solos, one string at a time, and really fast, like a horn player could
I'm not sure if Teddy Bunn, who is not a very famous figure in the scheme of things, really listened much to Django -- they were more or less contemporaries, so it was certainly possible
But Bunn has this single-string, melodic thing going on too, playing really interesting backup parts

Boss Lady: Yes, I'm at the part now where he's playing the melody and the saxophone is off on another plane
But Patrick, come on, let's talk about that saxophone. I mean, it's so expressive!

Boss Lady: He's pulling it like taffy. It's like he's saying at that moment, there is no more flexible, soulful instrument in the world. It has no limits

me: He's got this incredible tone, and vibrato control

Boss Lady: I'm in love with him. He's making that saxophone sing, and it's singing right to me.

me: Bechet could play fast -- you hear a few technical licks here. But he has this way of saying so much with such simplicity
Before I forget: you do know this tune, yes?

Boss Lady: I know I'm painfully out of it sometimes, but I'd really have to live under a rock not to know this.

me: And it wasn't the first jazz recording of "Summertime" -- Billie Holiday did an exquisite version in the summer of '36 -- but it remains one of the most definitive

me: Because, as you've pointed out in so many evocative words, it's pretty awesome