I Killed Ray Brown: A Remembrance

I Killed Ray Brown: A Remembrance 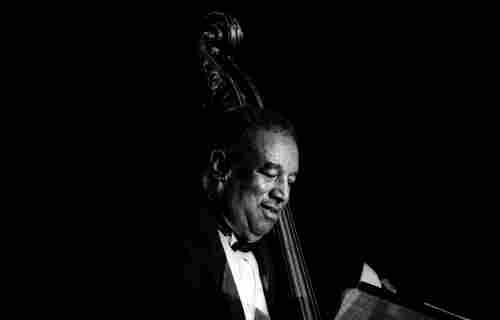 I killed Ray Brown. This confession may come as a shock to most people, especially since it's not remotely true. But seven years ago, in the summer of 2002, it certainly crossed my mind.

Some back story: seven years ago, my father and I were in Chicago to catch a Cubs game, eat deep dish pizza and all that. One night we looked in the paper to see what kind of music was happening while we were there, and saw that the legendary bassist Ray Brown was opening a five-night run at the old Jazz Showcase.

Being a jazz student at the time, I was well-versed in the music of Ray Brown, from his work with Oscar Peterson and Ella Fitzgerald, to his then-recent Live At Starbucks album, one that is still heavy in my rotation. Brown, quite literally, wrote the book on jazz bass playing, and played with nearly everyone worth playing with in his long, robust career.

We had to see him.

Thinking there would be a long line, especially on the opening night of a five-night run, we got to the club pretty early to see when the doors were supposed to open. Funny thing was: no one was there yet -- not even the club owner. Well, no one but Ray Brown and his two bandmates, pianist Larry Fuller and the phenomenal drummer Kareem Riggins. They were just hanging out in the Chicago sun, waiting to be let in so they could set up.

We were just killing time, so we sat out by the door with them, making small talk about where we were from (Kansas City), how I was an aspiring jazz musician and regarding their week-long residency at the Showcase. Our conversation wasn't all that long -- I didn't want to bother him too much before the show -- but I do remember him telling me how great it was that young musicians could now go to school to study jazz. In his day, he said, musicians had to pretty much learn on the gig, or, if you were lucky enough, from another player who would take you under his wing.

When the owner finally showed up to unlock the doors, I briefly helped Brown carry his bass amp over the hump in the doorway and then watched the band take the stage and start setting up. We sat down at a tiny table closest to the stage, and watched the musicians tune and soundcheck through the heads of a couple tunes.

You can learn a lot about how to be a musician just by watching pros: how they unpack their instruments, how they carefully tune and tighten the drum heads and adjust the cymbals just so, how they warm up their hands and fingers, and how after they run through a tune or two, they go over little parts of the arrangements and make adjustments. This was especially true in watching Ray Brown.

(Subsequently, you can learn a lot about a band by seeing how carelessly and slowly they saunter on, how much time it takes to set up and how long their soundcheck goes. One of my musical pet peeves is seeing a band which acts like it's never played together. My advice to young bands: fine-tune your set-up and tear down time; the audience and the other bands will appreciate it. End rant.)

Brown and Riggins made a bit of chit-chat with us, asking how it sounded out where we were sitting. For me, at the time, I was amazed at how casual and intimate they were. Brown seemed like a truly gracious, genuine man, even with two strangers he'd never met. Soon the club began to fill and the band tore through their two sets.

For a 75-year-old veteran, let's just say he hardly played like a 75-year-old. Brown had amazing dexterity and precise confidence in his walking and solos. The lines perfectly outlined the chords Fuller was playing on the piano with skillful economy -- each note was just perfectly placed. The group recalled Oscar Peterson's classic piano/bass/drums trio sound, but because of Fuller's complex chord voicings and Riggins' modern drumming style, it came off fresh and vibrant.

The highlight was how well Brown matched the skillful drumming of Riggins. The two of them were about as locked in as any drum-bass tandem I've seen; they knew exactly what to play when, sometimes before the other player knew what he were going to play, as if operating with acute telepathy.

After the show, Brown was mobbed with fans, signing autographs and taking photos. I probably should have asked him to sign a record or something for me, but I simply made eye contact with him as we walked by, said thank you for the great show and it was nice to meet him, and headed out into the Chicago streets and walked back to the hotel.

Exactly a week later, on Jul. 2, 2002, I was back in Kansas City when I heard the news that Ray Brown had died. He had finished his run of shows at the Jazz Showcase and was set to open in Indianapolis that night. According to the reports, Brown had played a round of golf during the day and had gone back to his hotel for a nap before his next gig. He never woke up.

It's amazing to me that to the very end, Brown was still doing what he loved: jazz and golf. Seven years later to the day, I can't think of a better way to go.