Accessibility links
Remembering George Russell: Composer, Theorist, 'Ezz-Thetician' : A Blog Supreme Everyone could have Miles and Trane and Bill Evans. But Russell, the behind-the-scenes theorist caught in the middle of one of jazz's most fertile periods, and largely overlooked for that reason, became one of my heroes. 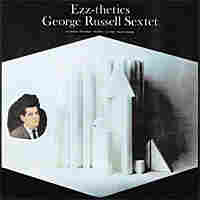 The first day I started at my college radio station, the DJ I was shadowing took me into the record library and pulled out three records. One of them I no longer recall, but I do remember that he chose Ted Curson's Tears For Dolphy. As a segue, he then went over to the adjacent aisle and picked out George Russell's Ezz-Thetics, featuring (among others) Eric Dolphy.

"You ever heard this album?" the DJ asked me. I was 18; I hadn't any idea who any of these musicians were in the first place. "Amazing record."

I don't remember much about my first impression of that music. But over the next four years, I came to learn why it was a crime that I — and more people — didn't know who George Russell was. He was the composer of Afro-Cuban landmark "Cubano Be/Cubano Bop"; the invisible hand behind the modal jazz of Kind of Blue; the academic, big-band leader, tape loop experimentalist, embracer of funk and generally awe-inspiring figure. His "Bird In Igor's Yard" was Third Stream before that existed (he would later be tapped by Gunther Schuller to teach at the New England Conservatory). And lest we forget, he managed to make a number of quite-decent-to-minor-classic records under his own name: Jazz In The Space Age, George Russell Sextet At The Five Spot, The Outer View, The Jazz Workshop and so forth.

I have great memories of listening to George Russell records with friends: trying our best to imitate the Jon Hendricks word-art that preceded "New York, New York"; bumping far-out later material like Electronic Sonata For Souls Loved By Nature (the 1980 recording) or The African Game on overnight radio broadcasts; attempting to understand Russell's Lydian chromatic concept (and getting nowhere). To know George Russell's records, it turned out, was something of a hipster handshake. OK, replace "hipster" with "hopeless jazz nerd," but you get the idea. Everyone could have Miles and Trane and Bill Evans. The behind-the-scenes theorist caught in the middle of one of jazz's most fertile periods, and largely overlooked for that reason, could be one of my heroes.

The best-known LP of Russell's solo discography, Ezz-Thetics, was reissued sometime within the last few years. To my ears, the sonics of the album still date it as a work of 1961, but the compositions and arrangements just seem so thoroughly contemporary. Many of the so-called progressive modern jazz recordings of today still seem to be going after that same mix of tense harmonic adventure, left-field textures and driving swing feeling. And having Eric Dolphy sign on as a soloist didn't hurt either.

This video promoting that re-issue, cut together by the JazzVideoGuy, tracked down producer Orrin Keepnews to talk about that album:

Composer, pianist, theorist, arranger, bandleader, teacher and jazz great George Russell died yesterday, Jul. 27, 2009, after a long struggle with Alzheimer's disease. Tonight, my college radio station will undoubtedly be playing George Russell's music. I know this because my first mentor at WKCR, the one who opened my ears to Russell, is scheduled to be on air tonight. I don't think Paul Burkey remembers my first encounter with this music, but I think it'd be a safe prediction that he'll proudly be spinning Ezz-Thetics nonetheless.