Accessibility links
Oh Julius Hemphill, You're Such A Tease : A Blog Supreme When you work the weekend shift in an empty office, sometimes you just happen to notice stuff sitting on your colleagues' desks. Like this Bob Boilen script for the next episode of All Songs Considered, which contains an amazing Julius Hemphill st...

Oh Julius Hemphill, You're Such A Tease

Oh Julius Hemphill, You're Such A Tease 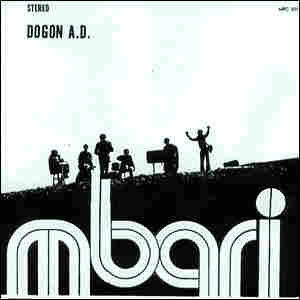 The original cover to the original recording of Julius Hemphill's "Dogon A.D.", the title track of the album released on Hemphill's own Mbari label. Mbari Records hide caption

When you work the weekend shift in an empty office, sometimes you just happen to notice stuff sitting on your colleagues' desks. Like this Bob Boilen script for Monday's All Songs Considered episode:

It's hard to pick just one great saxophone player, but if I had to name my favorite, it would be Julius Hemphill. Julius started the World Saxophone Quartet in the late 1970s, and if you want to hear some remarkable playing give any of their CDs a listen.

I also have a soft spot for Julius because I was lucky enough to play with him for a brief shining moment. His band was playing up in the loft one New Years Eve at a Washington, D.C. club called d.c. space, and my band Tiny Desk Unit was playing downstairs. Just after the stroke of midnight, Julius came downstairs and joined us on stage with his sax and started to wail. I cranked the volume on my homemade synthesizer and did the same. I'll never forget it.

Check out All Songs Considered sometime late on Monday to hear Hemphill's classic "Dogon A.D.", as interpreted by the Vijay Iyer trio on its forthcoming Historicity. (Pre-order here.) And while you're at it, hear a live version, as recorded at this year's Newport jazz festivities.

Two NPR Music stories this weekend about records which aren't necessarily jazz, but involve serious jazz talent. The first is Jon Kalish's report on Mazel Tov, Mis Amigos -- a 1961 Riverside album which sets Jewish popular and folk songs to Latin beats. It's an interesting piece because it sheds some light on the crossover between Latino and Jewish communities in post-World War II New York. Moreover, the music is really solid; not only did it call upon the talents of folks like Doc Cheatham, Clark Terry, Ray Barretto and Charlie Palmieri, but Arturo O'Farrill deemed it worthy enough to lead a recreation of the album live at Lincoln Center Out of Doors.

The second story is an interview with Bloomington, Ind.'s Dena El Saffar, leader of a band called Salaam. She's an Iraqi American violist who got bitten by the Iraqi music bug during a family trip to Baghdad right before the Gulf War. Salaam blends Iraqi maqam, among other Middle Eastern musics, with all sorts of Western this and that. And it's quite interesting. If any of this sounds familiar, you may know of her brother, Amir ElSaffar, who also contributes to Salaam. He's a legitimate practicioner of Iraqi maqam, but also a jazz trumpeter who's played with Cecil Taylor and other heavy cats. (An NPR profile from 2006.) Anyway, I think I've made it clear that I dig his natural-feeling maqam-inspired improvised music on these servers before; these days, ElSaffar is also collaborating with Iranian American saxophonist Hafez Modirzadeh, and he recently won a CMA grant to do further work with his Iraqi-jazz ensemble.