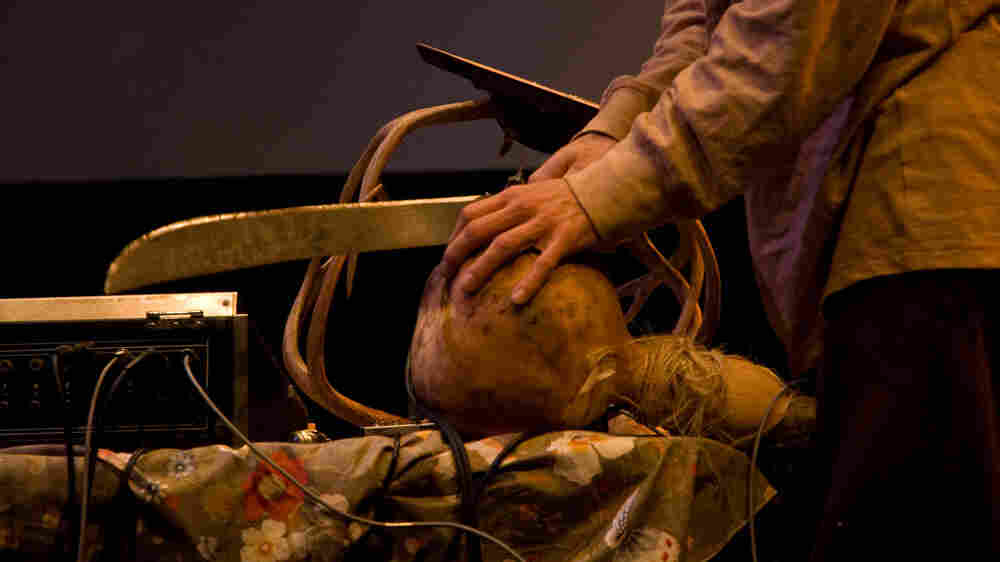 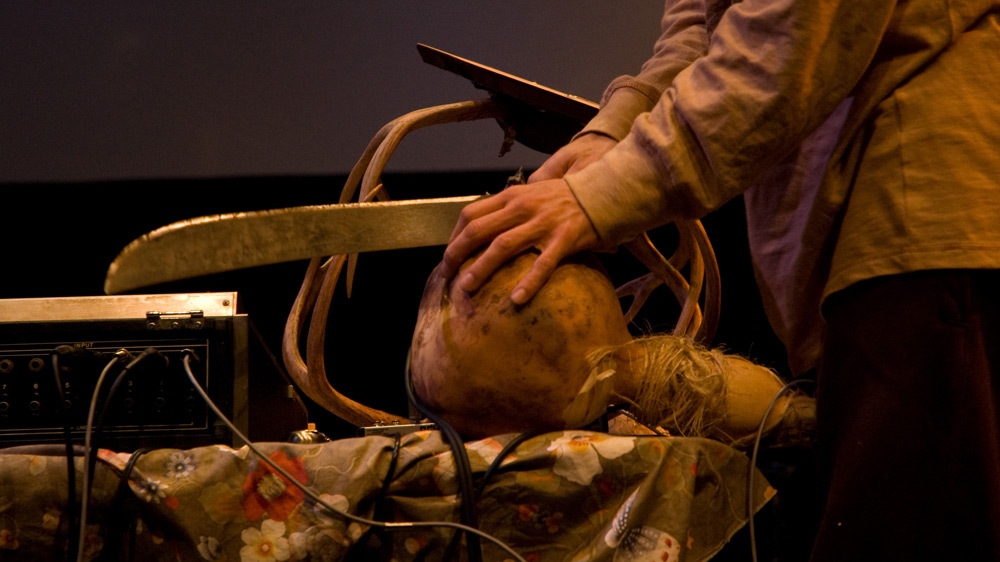 Nick Becker plays the gourd -- with a sword.

Maybe it was the economy or maybe it was a curatorial decision, but the 11th annual High Zero Festival in Baltimore, Md. didn't have the "star power" of previous years. There was no Tony Conrad or Joe McPhee, but in a city with a solid bed of new music practitioners -- organized by the keen ears of the High Zero organization -- you really couldn't ask for a more creative line-up.

As always, High Zero puts local Baltimore musicians, artists and dancers on the same stage as international veterans to completely improvise "new music," a rather loose term for sound with little connection to established forms. As a recent set of a CDs documenting the festival's 11 years reveals, High Zero Festival is the premier showcase for spontaneous sound.

The documentation here begins on Saturday (I missed both Thursday and Friday night's concerts) and is slightly out of order. Why? Because the fine folks at High Zero generously provided A Blog Supreme with a free download of my favorite set, which is right below.

Check back tomorrow for my review of Sunday night's performances. And if you're still not sure what this "free-improvisation" thing is about, check out my festival preview. 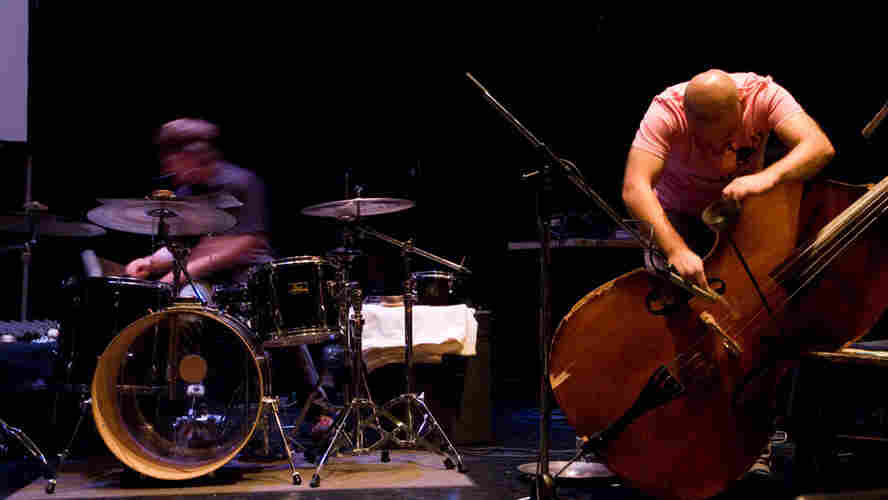 Download The Concert [Windows: Right-Click and "Save Link As"; Mac: Control-Click]

The absolute highlight of High Zero was this unusual set-up of two basses, two percussionists and electronics. The musician known as Killick had told me about drummer Morten Olsen's solo set on Friday night: 20 minutes of hyper-active blastbeats set to seizure-inducing strobe lights. This non-stop slaughter of the senses caused people to leave. But that was no indication for what was to come.

The set was relatively quiet compared to anything else at the festival, a study in patience and listening. The percussionists rubbed the skins of their drums and vibrated bells. Raed Yassin used the body of his double bass as a giant resonator for just about anything other than the strings. Hunched over her upright electric bass, Margarida Garcia emitted pops and sudden low-end plods as Hans Grusel tastefully pitched electronic strands of sine waves. Come to think of it, the natural, doomy drones were surprisingly reminiscent of SunnO))) -- if the art-drone-doom band ditched the distortion on its latest album, Monoliths & Dimensions.

Midway through the improvisation, the quintet rumbled without overstepping the bounds of the natural arc. Paul Neidhardt -- a young Baltimore percussionist whose name I hope to see more after this weekend -- removed the bass drum and began to roll it in circles as Olsen unleashed a torrent of cymbals and toms.

But the individual contributions mattered little in the grand scope of what was ultimately a fully-realized improvisation. The players were clearly in tune with one another, digging deep into each texture. In the recording above, listen especially at 20:45: Olsen holds a terrifying cymbal crash for what seems like an eternity. But when he lets up, Neidhardt was there with a thundering response. It gave me absolute chills. 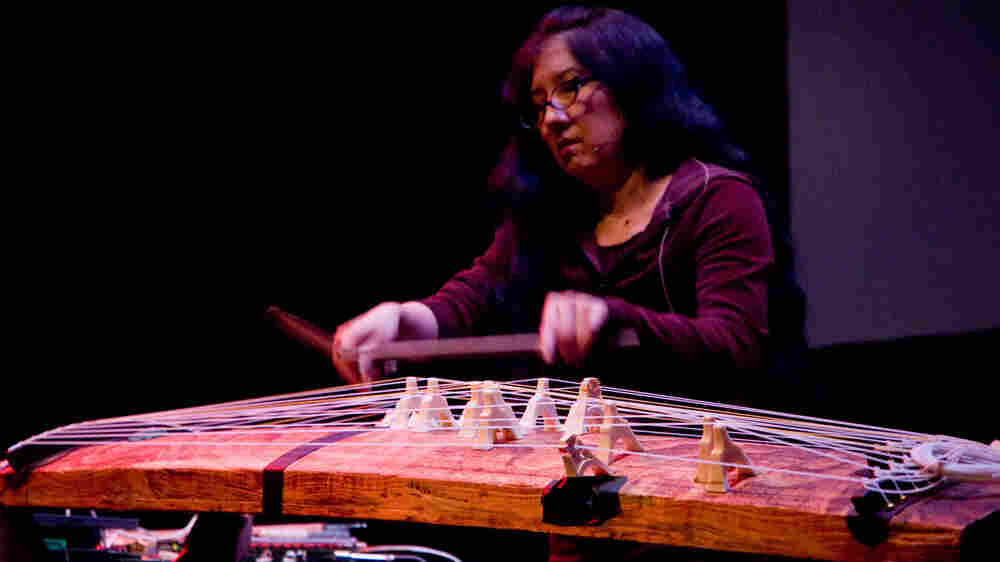 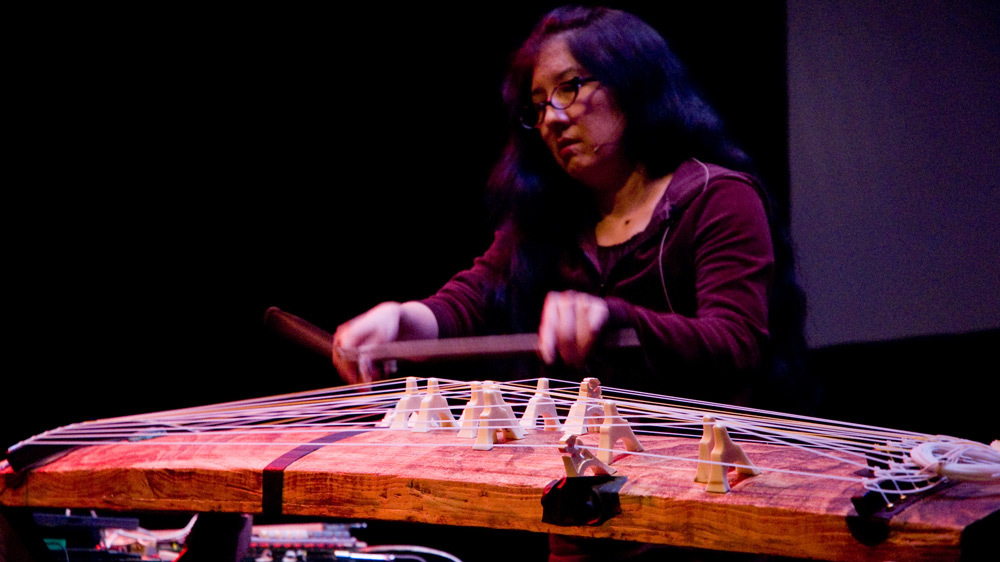 So, there was no laser koto. I have to admit, I was really hoping for some laser koto. Nevertheless, Masaoka began Saturday night's festivities by plucking and bending of the traditional Japanese koto with non-traditional techniques (and sans lasers ... sorry). I kept thinking it was such an oh-so-quiet way to begin a Saturday night, but then Masaoka's right hand hovered over a laptop and those long, plucked strings went down a rabbit hole of decaying echoes. After building a rhythmic decay, Masaoka slashed furiously at the koto and the rabbit hole filled with blood. There was almost a sense of relief when the set concluded; an emcee (and High Zero participant) Tom Boram remarked, "She didn't trash the koto like I asked her to!" 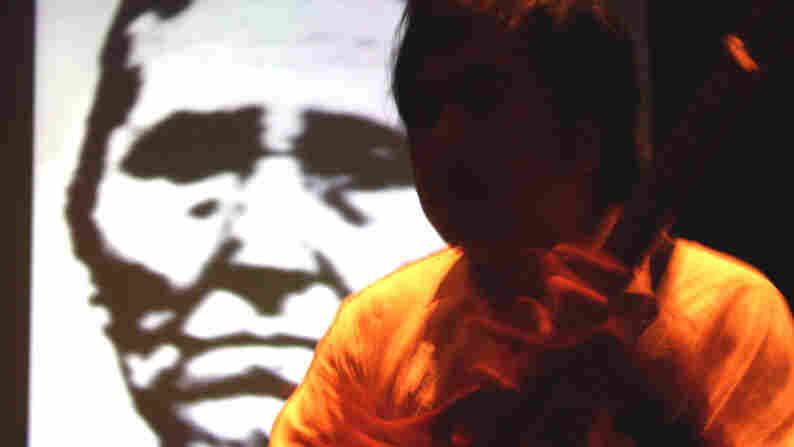 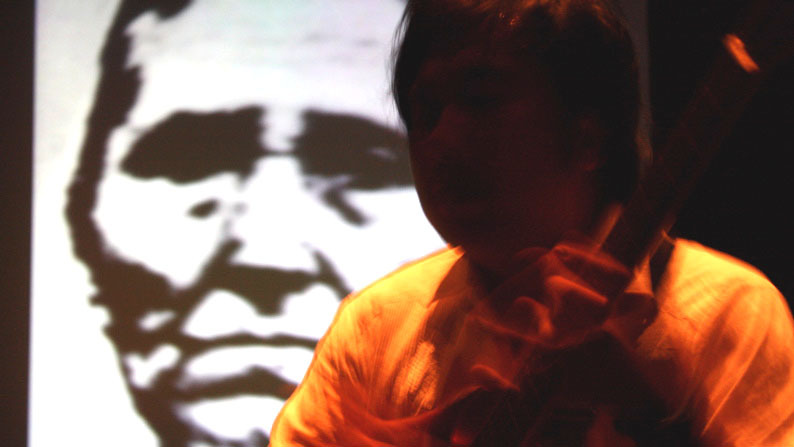 Kenta Nagai plays in front of a projection by Martin Blazicek.

When a band feels like it's too boring to watch, sometimes the members get some art-school friend to film double-exposed movies featuring open wheat fields and depressed people. It's a gimmick that detracts from a poor interaction with the audience. However, not only were projectionist Martin Blazicek's images riveting and themselves improvised, the musicians on stage interacted with us and the screen.

Blazicek sent black and white photographs through a number of live manipulations, flickering faces and sullen streets as the musicians provided a gnarled soundtrack. Miya Masaoka stayed on from her solo set, using her laptop to pulse low-end soundwaves, which Rose Burt deftly matched with low-end drones from her baritone sax. Of many new discoveries throughout the weekend, though, Kenta Nagai became somewhat of a fascination. With no effects at his feet except a volume pedal, Nagai relied mostly on the natural sustain of his SG-style guitar. His piercing attacks were like being hit by a feather, yet coming away with a bruise. Killick was his natural pair, executing pull-offs on his "devil cello" punch for punch. 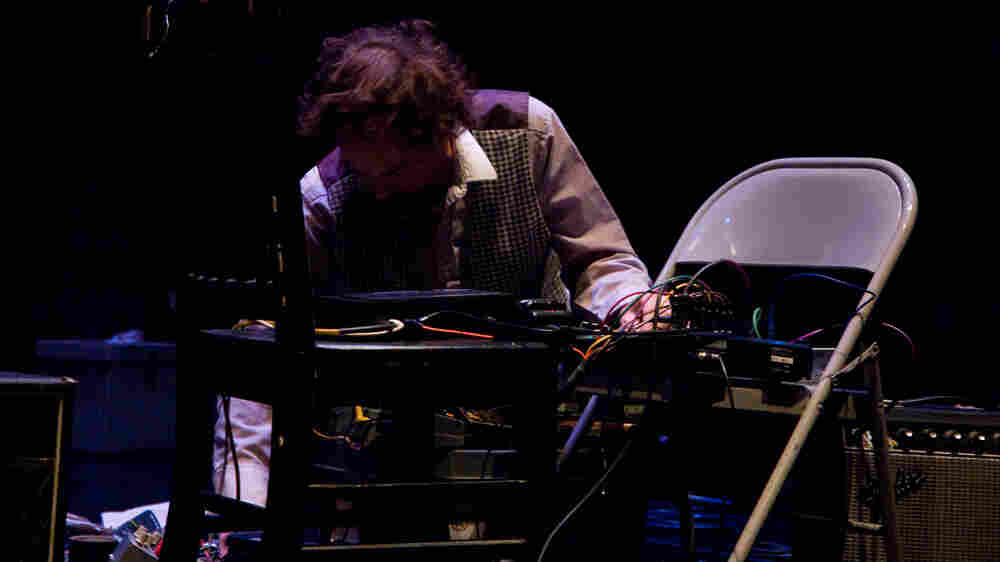 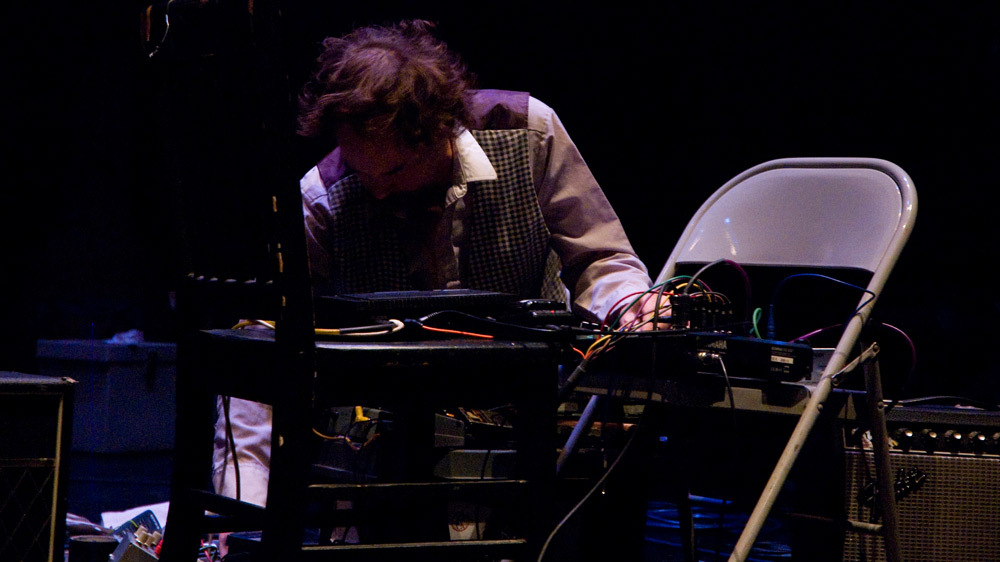 Admission: improv electronics are generally not my thing. There's too much room for unnecessary dis-synchronization or a bevy of unsequential clangs repeated until something makes sense. (Though some might level the same criticism at free-improv in general, so here's a preemptive touche.) But for the sake of discovery, I sat through this electronics trio, initial reservations be damned.

Chris Cooper laid some seriously distorted sewage to the proceedings, which suited me just fine, and Stewart Mostofsky (Ehse Records' label owner) kept his contributions mostly percussive. But the wrench in the whole thing was Nick Becker. He added some much needed humor to the evening by sawing a contact mic-ed gourd with a sword (see lead photo), but his Moog fumblings and zither beatings had little connection to the textures of his fellow improvisers. It felt overly discordant for what was already an awfully noisy set. The trio did find its footing somewhere in the proceedings, though, mostly as an all-out banger. Which I find hard to argue against. 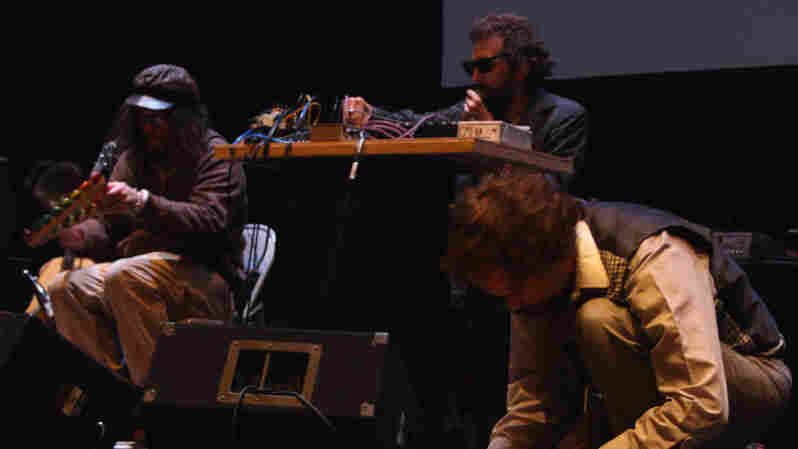 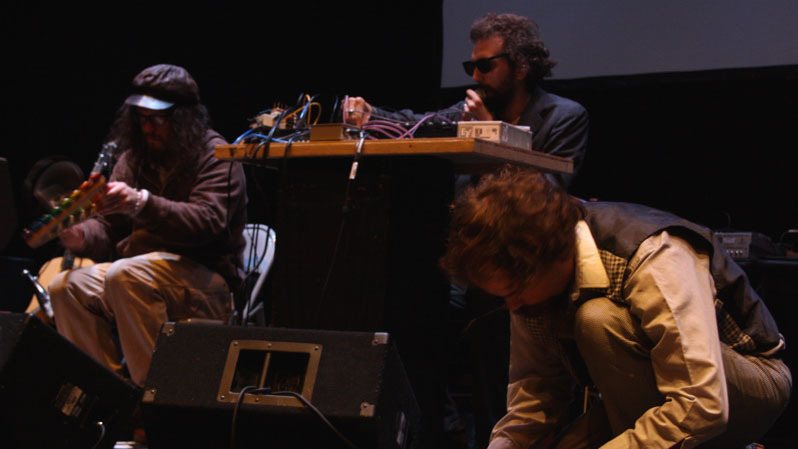 Saturday night's events concluded with this racket of a quintet. Twig Harper's electronics were louder than the rest of the musicians, and Shelly Blake-Plock seemed preoccupied with shoving as many things as he could into the strings of his guitar. (Pencils and dollar bills are one thing on a prepared guitar, but a toy xylophone? Really?) But the group hit a rumbling stride halfway through with guitarist Ava Mendoza, whose talents I can't effuse enough, carrying the improvisation with a blues skewed through twitched effect pedals.