Accessibility links
The Women Who Made Thelonious Monk : A Blog Supreme Robin D.G. Kelley's new, definitive biography of Thelonious Monk takes pains to acknowledge the support of women in the life of the musician. You can literally hear it in the music.

Listen
The Women Who Made Thelonious Monk

My story about Thelonious Monk biographer Robin D.G. Kelley ran on All Things Considered yesterday. But wait! There's much more to say: Kelley's new book, Thelonious Monk: The Life and Times of An American Original, takes considerable pains to acknowledge the support of women in the life of the musician. 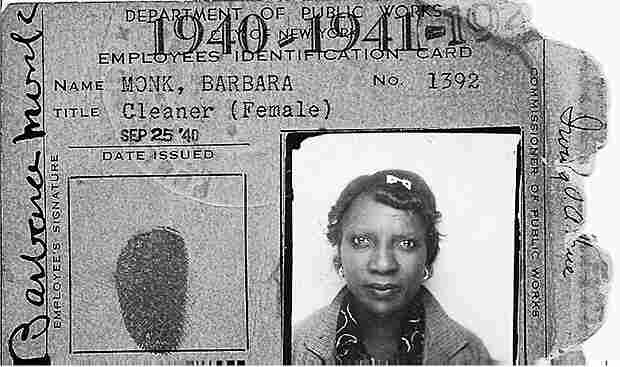 The photo ID of Barbara Monk, Thelonious Monk's mother, shows that she was employed by the City of New York to clean public offices. courtesy of the Thelonious Monk Estate hide caption 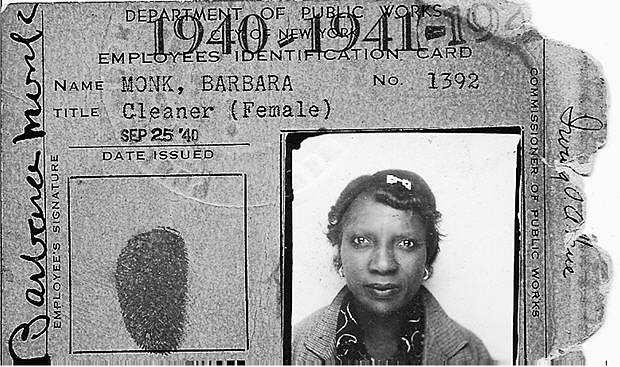 The photo ID of Barbara Monk, Thelonious Monk's mother, shows that she was employed by the City of New York to clean public offices.

courtesy of the Thelonious Monk Estate

First, there's his mother, Barbara Monk, who moved to New York City with Thelonious Monk Sr., and their three children: Thomas, the eldest; his sister Marion, and Thelonious Jr., the youngest child. The family moved to New York City to escape the farm life they had known in North Carolina. Thelonious Sr. eventually returned to Carolina, and Monk's mother and sister raised the family. Barbara Monk cleaned city offices to support her kids. When the youngest Monk began skipping classes during his senior year at Stuyvesant High School -- and eventually left altogether -- it was Barbara Monk who encouraged him to take that leap of faith.

A few years earlier, she had also supported Thelonious Jr.'s decision to follow a Christian evangelist, a woman whose name was never known to the family (and whose precise religious affiliation was just as hard to pin down), on a barnstorming tour of Midwestern towns for nearly two years.

As Kelley recounts in his book, Monk's travels through Kansas and other states is the most mysterious and undocumented time in Monk's life. But they were also perhaps his most fruitful years as an itinerant artist, learning how to call tunes on the spot, and how to respond to both musicians and audiences in the moment.

There was also a piano teacher early in Monk's development named Alberta Simmons. Kelley learned about Simmons' life from her daughter, Alberta Webb; Simmons, born in 1892, died long ago. Alberta Simmons was a performer, and assimilated the stride styles of Fats Waller, James P. Johnson and Eubie Blake. She played the Clef Club, speakeasies in New York City, and even went out to Flushing, Queens for gigs. But as Webb told Kelley, "Being a woman, [Simmons] got sort of sidetracked trying to raise her children. Unfortunately things did not work out in later years."

Kelley's detective work found New York census records of Alberta Simmons at five year intervals. As time progressed, Simmons reported her career as piano teacher, and, in later years, "domestic worker." But before her earnings as a teacher dried up, Thelonious Monk learned stride piano from the woman. Monk was known to visit the home of James P. Johnson, and attend "cutting sessions" by other famed stride practitioners. But early on, Alberta Simmons showed him the way.

Kelley told me that Alberta Simmons never got the chance to make a recording, so there's no sample artifact of her playing style. Her daughter, Alberta Webb, told Kelley that she unfortunately had no photographs of her mother to share either -- and Webb died before the publication of Kelley's book. It's one of Kelley's regrets, he says. (Then again, you develop a mountain of regrets when you interview 300 people, read countless lost articles and spend 14 years on a mission that no one quite believes you would complete.) On the bright side, Kelley says that it's not much of a leap to think of Monk's 1956 solo recording of "Memories of You," the Andy Razaf/Eubie Blake song, as his tribute to Alberta Simmons. According to Kelley's research, she played this tune often, as if it were her own. Here's an excerpt (from The Unique Thelonious Monk, originally issued on Riverside Records):

Then, of course, there's his wife, Nellie Monk. She can't be underestimated for her role as partner, protector, career manager and supporter of Thelonious Monk. She gave her husband the space and time to develop his musical sense of space and time. She also cleaned private homes and worked as a seamstress in the lean years: The period when his music was dismissed or ignored by critics, thus making him a hard sell to the public, to club managers and to anyone considering him for studio recordings.

Last but not least, there's the great pianist and composer Mary Lou Williams, who defended, promoted and befriended Monk. Reportedly, she first heard him as a young man in Kansas City while he was touring with that mysterious traveling evangelist. She later helped him get gigs in New York, and introduced him to a great deal of music. Kelley writes that despite Monk's Baptist roots and travels with evangelical revivals, he attended Catholic churches with Williams. Among the home recordings Kelley was exposed to by the Monk Estate were these pieces that Williams arranged and wrote out for Monk to try. Hear Monk practice "All God's Chillun Got Rhythm."

Takes One and Two:

Robin Kelley also sent me an unpublished excerpt he wrote about the music.

After ending his home recording of "Body and Soul" abruptly, Mr. Monk then shuffles some papers on the piano and announces, with the enthusiasm of a kid in a toy store, "Now let me see how we make out with this now. Mmmmm!" He then proceeds to tentatively work through an arrangement of "All God's Chillun Got Rhythm" -- a Gus Kahn and Bronislau Kaper composition Mr. Monk never recorded nor included in his repertoire. The initial choruses sound a lot like Mary Lou Williams' 1946 trio recording (Classics Records 1050) of the song, which I confirmed when archivist Ann Kuebler helped me locate the arrangement (titled simply "Chillun") in Ms. Williams' papers at the Institute for Jazz Studies. It is likely that Mr. Monk had a copy of her arrangement from the 1940s since they exchanged quite a bit of music during the early days of bebop. In particular, Mr. Monk takes from the arrangement Ms. Williams' rephrasing of the melody, the ascending arpeggios in the third and fourth bar of the song's A section, and the key signature: A-flat ... By the second take, he begins to incorporate more of his own unique phrases and improvised lines, including a striding left hand and dissonant clusters in the piano's upper register. Perhaps as a tribute to Mary Lou Williams, his final six bar cadence incorporates the kind of "boogie woogie" left hand figures Ms. Williams often used. By the third take, "Chillun" is entirely his own. Opening rubato, almost ballad-like, Mr. Monk throws in an unusual bass line in bars 9-12 and shifts into stride piano, over which he plays several high register phrases over and over to see what they sound like. By the time he returns to the melody, Mrs. Nellie Monk adds her singing voice and Mr. Monk closes with a tag similar to what he plays at the end of Gershwin's "Nice Work if You Can Get It."

Also, Mary Lou recorded this [arrangement] on October 7, 1946 (three days before Monk's 29th birthday). Unique are her phrasing of the melody and, most importantly, the bass line, in bars 3 and 4 of the A section; those ascending arpeggios. Notice how he echoes her phrasing throughout, especially in early takes of the song.

Here's the first 'A' section of Mary Lou's version:

Now go back and listen to Monk's versions with this information: The context makes a huge difference.

As long as Monk's legacy still rings in our ears, the women who contributed to Monk's development as a child, student, artist and man are to be honored. (And then there's the Baroness Pannonica de Koenigswarter, but that's another story in itself.) Thanks to Robin Kelley for keeping their gifts to the music alive, if not unearthing them altogether.