Accessibility links
George Avakian: 'The Father Of Jazz Album Annotation' : A Blog Supreme The tradition of smartly-annotated jazz albums is a long one — and another of the many things George Avakian is known for. On the eve of this year's Grammy Awards, the famed record producer fielded some questions about the history of liner notes.... 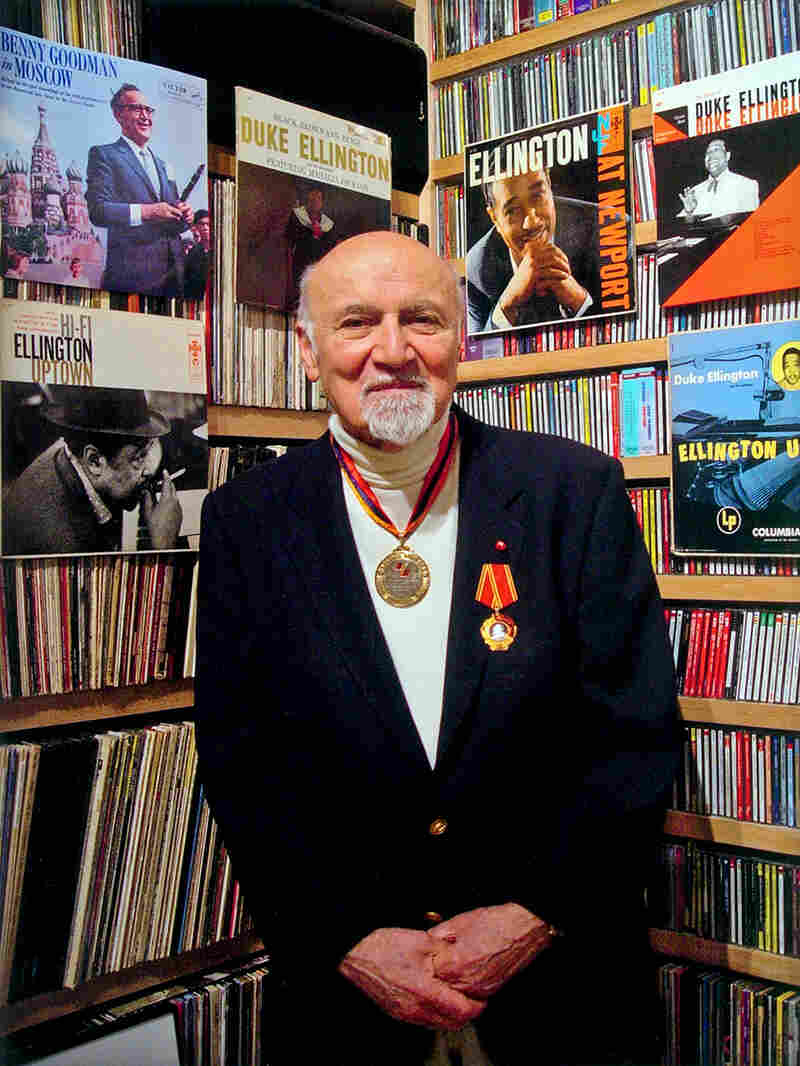 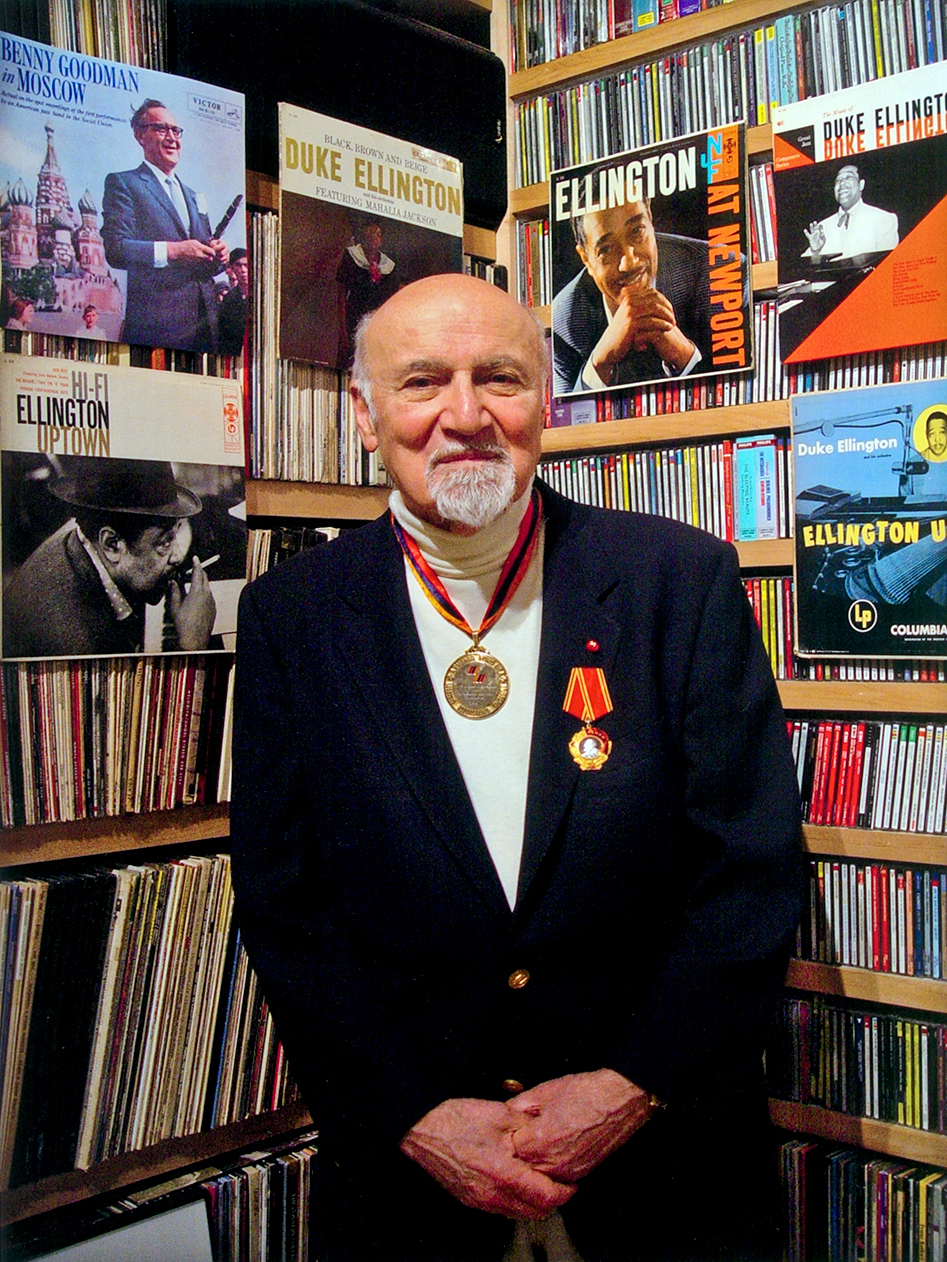 George Avakian, displaying some highlights of his CV.

There's one category of the Grammy Awards which always seems to smile upon jazz: Best Album Notes. This year is no exception. Two early jazz and blues compilations received nominations, as did Dan Morgenstern's work for The Complete Louis Armstrong Decca Sessions (1935-1946) on Mosaic Records.

The tradition of smartly-annotated jazz albums is a long one -- and another of the many things George Avakian is known for. Avakian's time as a producer at Columbia Records resulted in the adoption of the 33 1/3 rpm LP; the releases of seminal Miles Davis/Duke Ellington/Louis Armstrong albums; and the emergence of the first deluxe jazz reissues. Within all that, he also pioneered a format for liner notes which remains in place, in essence, to this day.

On the eve of this year's Grammy Awards, I sent Avakian a short e-mail questionnaire about the ins and outs of album notes and reissues.

Is it accurate to say you invented jazz liner notes?

Not quite. More accurately, I have been described many times as "the father of jazz album annotation." (As frequently acknowledged, all subsequent annotators emulated the style and content established in the both the Decca album and Columbia reissues I produced.)

How about liner notes in general?

Chronologically, the first jazz liner was a superb booklet written by Warren W. Scholl for the 1936 Bix Beiderbecke Memorial Album (five 10-inch 78-rpm discs), on Victor. It included musical extracts, and the discs included previously unknown alternate takes. Regrettably, Scholl, who had been a friend of Bix and other Whiteman musicians, never wrote another.

The second one was written by John Hammond for the 1938 Bessie Smith Memorial Album on Columbia (four 10-inch disks; annotation on inside of the album cover). The third one was in my Chicago Jazz Decca album, (six 10-inch disks) with a 12-page booklet. Started in 1939 and completed in January 1040, this was the first jazz album ever (original recordings, not issued in single format).

Then came my series of jazz reissue albums for Columbia (the Hot Jazz Classics), which were released in groups of 4 (later 3) at intervals of 3 or 4 months, along with several singles each time, which began in the spring of 1940, was interrupted by World War II in 1941 and resumed in 1946 when I returned from Army service in the Pacific, until Columbia created the LP in 1948. The rest is familiar territory.** [Ed.: see footnote from Avakian for more details.]

Why did you feel some kind of annotated writing about the music was necessary?

Before Scholl, record buyers had no way of knowing more about a jazz recording than what appeared on the 78 r.p.m. labels: composition title, composer(s) and artist. There were no books -- and precious few magazine articles -- available in the United States about jazz.

How did that idea come to you?

The older brother of a high school classmate played out-of-print Armstrong Hot Fives and Sevens for me, and advised me to send to Paris for the only books in existence that could help me learn more about jazz and its history (Hugues Panassie's Le Jazz Hot and Charles Delaunay's Hot Discography). I started writing letters to record companies urging that jazz -- including reissues of unavailable classics -- should be released in album form, because it was worthy of preservation and study beyond the three-minute 78-rpm side, and with extensive annotation similar to those in classical albums for symphonies, operas, etc., complete with histories of the music, its performers and their historic significance. My first answer came years later -- a one-cent postcard from Decca, inviting me to stop by during my 1939 summer vacation to discuss my idea ... beginning with new recordings by the pioneers of the three cities where jazz became established -- New Orleans, Chicago and Kansas City. (I didn't care much for the more polite New York school.)

Are there any notes that you wrote any time in the past that you are still especially proud of?

The very first one still stands up after 70 years. I'll let posterity decide on others, but I am especially pleased with one that Columbia never used (although the company's own files establish that it was submitted well in advance of the production deadline). The principal guilty party in this exceptionally egregious example of corporate indifference and incompetence was fired -- though far too late.

This annotation was written for the 1999 CD edition of Louis Armstrong's Satch Plays Fats, but for reasons that do not reflect well on the Sony management of the last 30 years, my original 1955 annotation was used again. Since 1962, I had repeatedly advised the company that subsequent research by myself and others had shown that much of the published documentation on which [my original notes] were based was seriously flawed.

Word of the new annotation spread among jazz researchers, and I agreed to its publication in connection with an Italian celebration of Armstrong's centenary. It is still available in both English and Italian in Il Secolo di Louis Armstrong -- The Centennial of Louis Armstrong, a 2001 book compiled by Stefano Zenni for Luciano Vanni Publications of Milan. The information about Armstrong and Waller is not only greatly expanded, but it also corrects many errors that remain unchanged in Sony's edition of Satch Plays Fats.

What about notes by other writers that impressed you?

Dan Morgenstern and Steven Lasker have written the best and most scholarly annotations.

Jazz reissues have become big business for record labels. Many of them outsell new releases. Did you anticipate this development?

Not before I released the Benny Goodman 1938 Carnegie Hall Concert 2-LP album (not strictly a reissue, although it is a historic document like most jazz reissues). It was the first million-copy jazz seller.

What are some of the reissues that you didn't produce that you wish you had?

I held back on recordings by Leadbelly, Robert Johnson and Lonnie Johnson -- including unreleased masters I saved from being melted down in World War II scrap drives after I discovered them at Columbia's Bridgeport factory in 1940 -- because there were so many more urgent reissues to be made. Remember, there were virtually none on the market when I started except a handful of 78 rpm singles. (People forget that once I went to work full-time for Columbia after the war, I was in charge of Popular Albums and the International Department, both of which were at first very unimportant, but which became the largest profit divisions of the company by far.)

I should also have documented the mid-'30s Brunswicks of Glen Gray and the Casa Loma Orchestra, by far the best white band of the period. They paved the way for Benny Goodman to change the course of American popular music. (It is incredible to think that Goodman's "King Porter Stomp," composed by Jelly Roll Morton, was the No. 1 pop recording for weeks!)

Thank you again for your time and energy.

Thank you for giving me the opportunity to express these thoughts in what I hope will be a permanent repository of information!

**Because your posting may well be referred to by researchers for decades to come, I must violate my own desire to be brief by adding this footnote which is important for historic accuracy: The 5th through 8th Hot Jazz Classics albums were credited as "By John Hammond, America's Greatest Authority on Hot Jazz," which has been thoroughly established as a blatant lie. Hammond was in the A&R department of Columbia's New York office and had nothing whatever to do with the selection, creation and annotation of the albums other than to insert a gratuitous knock at Duke Ellington (essentially repeating a notorious comment in his magazine and newspaper reviews of the first performance of "Black, Brown and Beige"). Hammond never publicly acknowledged these canards. After professing verbally that this must have been done by the Columbia sales department without his knowledge and that my sole credit would be restored in subsequent editions of the four albums as well as subsequent albums in the series, nothing was ever changed in the annotations of Nos. 5 through 8 and the remaining pre-war "Hot Jazz Classics" albums were credited to "John Hammond and George M. Avakian," although once more Hammond had no connection with their production or annotation.

To better understand this arrogance and high-handedness, I quote Marshall Stearns, the leading jazz researcher and historian of the time, whose generosity toward me (among many others) with his time, knowledge and exhaustive record collection was an indispensible part of my foundation in jazz. "George, if you ever want to do anything further in jazz, don't complain about what Hammond did to you -- he can stop you cold," he said. That was how powerful Hammond was at the time. These and his similar usurpations of the work of others -- including some of my own subsequent productions -- have been thoroughly documented.