Accessibility links
On Lionel Loueke And Globalization In Jazz : A Blog Supreme Globalization is one of those neologisms of recent vintage which get tossed around rather recklessly wherever international exchange happens. But if anyone genuinely represents this trend in jazz, it's Lionel Loueke.

On Lionel Loueke And Globalization In Jazz

On Lionel Loueke And Globalization In Jazz 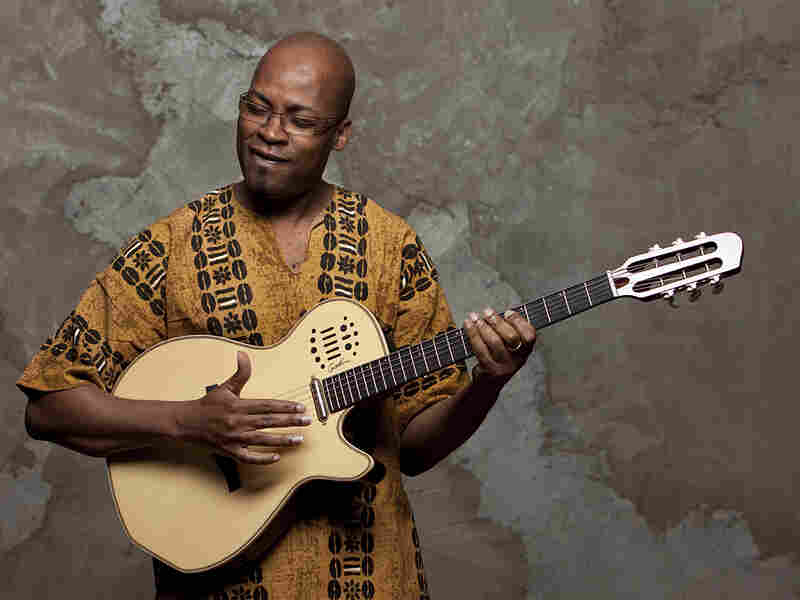 From down in Africa, though utterly unlike Toto: Lionel Loueke. Jimmy Katz hide caption

Lionel Loueke's new album, Mwaliko, is one of the records which NPR Music has selected for an Exclusive First Listen this week. You can hear the album in its entirety online at NPR.org/firstlisten, or directly here.

My notes about the record also appear on that page, where I wrote these lines:

His [Loueke's] is a dialect that speaks for the diversity and globalization that is 21st-century jazz ... its vocabulary owes as much to jazz as it does to the traditional music of West Africa, where he was born and lived for 21 years.

Globalization is one of those neologisms of recent vintage which get tossed around rather recklessly wherever international exchange happens. Jazz has been practiced across oceans almost since it was first recorded; nothing new there. But if anything has changed, it's the depth and frequency of cross-pollination in this age of global communication. And if anyone represents this trend, it's Lionel Loueke.

Loueke was born in Benin, studied music in the Ivory Coast as a teenager, did further jazz-specific training in Paris for five years and finally ended up with a Berklee scholarship. In Boston, he met his trio: Swedish bassist Massimo Biolcati, who has an Italian name, and drummer Ferenc Nemeth, who grew up in a small town in Hungary. On Mwaliko, he also collaborates with Angelique Kidjo -- also from Benin -- and the Cameroon-born Richard Bona. Loueke uses his jazz skills, forged in the crucibles of conservatories, to revisit songs and ideas he learned back in Cotonou. Obversely, some of the unique techniques he practices -- even on the album's unabashedly "jazz" tunes -- were inspired by sounds he remembers from his childhood.

We live in an age where Jazz is a Thing: a codified idiom that is widely taught as a curriculum. Its abstract definition remains completely nebulous, of course, but that hasn't prevented the rise of jazz education, the elevation of a jazz canon and the writing of jazz as history. Its immense diversity of practice doesn't negate the fact that the university of the streets is now, for most of today's top younger players, the Manhattan School Of Music (or The Juilliard School, or North Texas, or the Rhythmic Conservatory of Copenhagen, etc.).

But after school, all these cats -- who come from all over the earth and leave well-versed in standards and swing -- are left to their own devices. And that's where some choose to fully investigate their own cultural arts, or those of other cultures -- often with the perspective of jazz musicians. The Either/Orchestra's embrace of Ethiopian music; Miguel Zenon's jazz-informed investigations of Puerto Rican music; Anat Cohen, who grew up playing jazz in Israel and then discovered Brazilian choro in Boston and New York; Hakon Kornstad and Ingebrigt Haker Flaten playing Norwegian folk hymns for saxophone and upright bass; Danilo Perez returning to Panama to foster jazz education; whatever it is that Rudresh Mahanthappa is doing with Indian classical music. (And that doesn't even deal with the idea that country music, metal, hip-hop and indie/alt-rock are but cultural expressions with American origin.)

It's the modern global jazz narrative. And it results in one-of-a-kind records from folks like Lionel Gilles Loueke.