Accessibility links
Thom Yorke On Trumpet: Christian Scott And 'The Eraser' : A Blog Supreme Here's some new music by buzzed-about trumpeter Christian Scott. And here are comments from NPR Music's twenty-something interns, who don't follow the trail of jazz buzz — but who do like Thom Yorke and Radiohead.

Listen
Thom Yorke On Trumpet: Christian Scott And 'The Eraser' 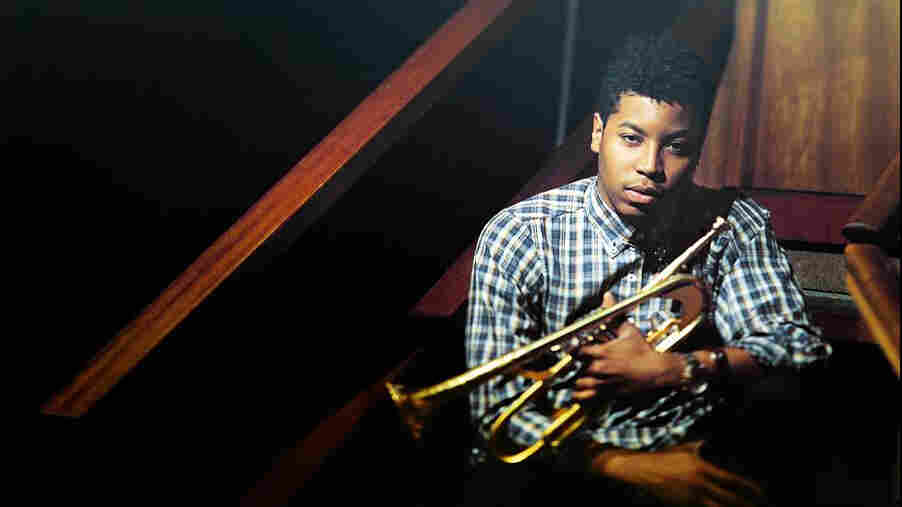 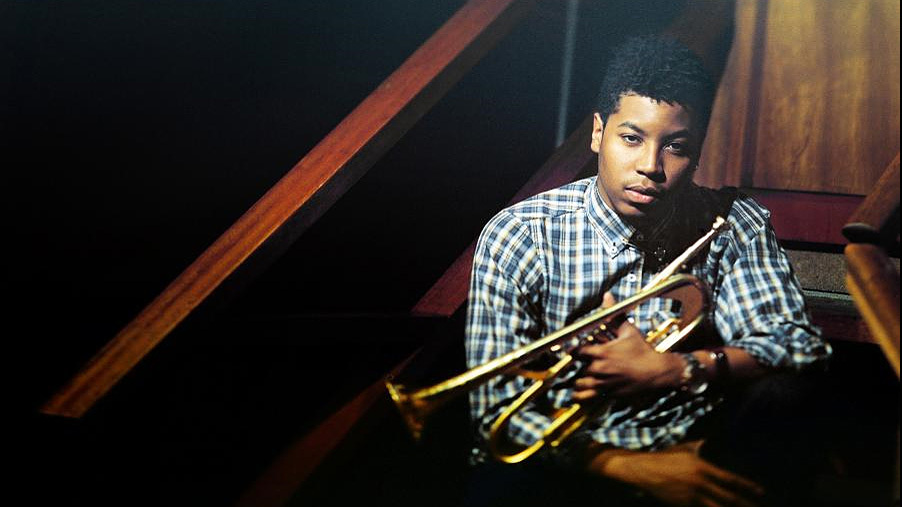 Christian Scott, in the inner sanctum of Rudy Van Gelder.

Here's some new music by trumpeter Christian Scott. It's the single from his forthcoming album Yesterday You Said Tomorrow, and it's called "The Eraser":

You'll notice that "The Eraser" is a cover of Thom Yorke's song, heard on the Radiohead frontman's solo album of the same name. That makes it something of an outlier for Yesterday: it's the only song that isn't an original composition by Scott or one of his bandmates, it doesn't have Matt Stevens ripping post-Rosenwinkel madness on guitar and it's almost the only track that doesn't simultaneously express a political statement. If you like this, or are perhaps a bit baffled but want to like it, or dislike it intensely, or have any sort of reaction that inspires you toward further curiosity, you may want to investigate more of Yesterday when it comes out in two weeks. (You don't have to wait until tomorrow: you can pre-order via the links above.)

If you keep tabs on the jazz world of today, you'll know that Christian Scott has been acquiring buzz in the run-up to the North American release of his record. He's on the cover of the new DownBeat magazine, for one; his fans have been salivating over the forthcoming release of Yesterday, for another. (He's also a candid interview subject -- that's for another post, though.)

Our current NPR Music interns do not keep close tabs on the jazz of today. They are, however, twenty-somethings and fans of Thom Yorke, whether with or without Radiohead. They're also smart people and good listeners -- it's why we hired them, after all. So I asked them to listen to this song on CD. Here are their comments:

Will Butler, our current All Songs Considered intern, says that Scott and the band got something right.

The music of the Radiohead/Yorke camp definitely lends itself to cross-genre interpretations, such as Brad Mehldau's "Paranoid Android" cover, or Christopher O'Reilly's more classically-oriented piano arrangements; so somehow Christian Scott's cover didn't surprise me. At the same time, I think they've definitely captured the Yorke-ish essence of the song, between a spot-on rhythm section and a muted trumpet that actually does quite well in mimicking the timbre of Yorke's voice.

One thing that bothered me slightly about the cover: on [the original], there is a high-frequency hiss that quietly accompanies the piano sample, almost like a buzzing snare drum -- on Scott's cover, the drummer imitates this sound, but with a loud, rattling cymbal or some similar effect. The point is that on the original song, I'd always thought of that sound as sort of incidental, like this cool epiphenomenon that was not the most important part. Though it obviously came to define the song in a big way, I couldn't agree fully with the way this cover recreated it, bringing it so blatantly to the forefront.

But Eamonn Featherston, a general purpose NPR Music intern, had a different reaction:

Eh, I've got mixed feelings about it. The drums are good, and add just enough variation while referencing the shuffling programming from the original. The crackling sound that's synched up with the piano chords is a nice touch as well. I really think the horn arrangement falls flat though --- bit of a problem for a trumpet player. The vocal part in the original rests on Yorke's weird inflections and pacing, and the particular ways he cuts certain syllables short. There's also that yearning quality to his voice that comes through really well when he goes for the higher notes, and in the backing falsetto vocals on the chorus --- those backing vocals in particular add a haunting element that's completely absent here. Without all of Yorke's idiosyncratic delivery, the melody really falls flat --- it just sounds boring and repetitive, and definitely doesn't hold up in this context.

Sarah Scanlon, who is our classical music specialist, also commented on the crackly percussion:

My first thought, being the analytical person I am, is, "cool, what are they doing to make that crackling, transparent sound?" After haphazardly convincing myself it must have something to do with wax paper and bb pellets, I could finally get down to listening for real. It was pleasant enough to listen to, though it sounded like it was edging towards smooth jazz, which isn't usually something I listen to unless I'm on hold with Verizon. Thom Yorke's melancholy sound has a place in my life on overcast, rainy days, but for the most part, I prefer my music to be a little more passionate and a little less withdrawn.

Sami Yenigun, our other general purpose NPR Music intern, had another point of reference:

"The Eraser" has already been reworked, successfully, as a hip-hop song, with an inspired verse from Lupe Fiasco of the Child Rebel Soldier supergroup. On Christian Scott's cover of the song, the rubbery bass kicks and electronic drum kits have been swapped out in favor of a more organic sounding drum kit, while a somewhat placid trumpet carries what would be Yorke's vocals. It makes for an interesting listen once or twice through, though if it were up to me, I'd take Lupe, Kanye, and Pharrell's take on it anyday.

Additionally, Mike Katzif, who occasionally posts here too (and was also, like fellow poster Lars Gotrich, a former All Songs Considered intern) had this to say:

Considering a majority of Thom Yorke's The Eraser was constructed from snippets of samples and cut up beats, this cover from Christian Scott does an admirable job of capturing that glitchy, odd-metered feel, especially in the piano and drums. That said, there isn't as much exploration or improvisation as I would have hoped from a song with such a beautifully open-ended modal chord progression. It's a solid, moody framework, but leaves a little to be desired to make it a truly successful jazz reworking.

I too was once an NPR Music intern, though I'll leave my comments for another forum.

Related At NPR Music: Christian Scott, interviewed for the late NPR program News And Notes. Scott and band play tunes from the last studio record, at WBGO. And Scott also made a substitute appearance with Allen Toussaint's The Bright Mississippi band, as heard live at the Village Vanguard.