Accessibility links
Chaz And Heritage: The Tin Men : A Blog Supreme A funny thing happened on the way to New Orleans Jazz And Heritage Festival on Saturday: it stopped raining. That opened the way for Chaz Leary, his middle and ring fingers pressed inside metal thimbles, and his handmade washboard.

Chaz And Heritage: The Tin Men

Chaz And Heritage: The Tin Men 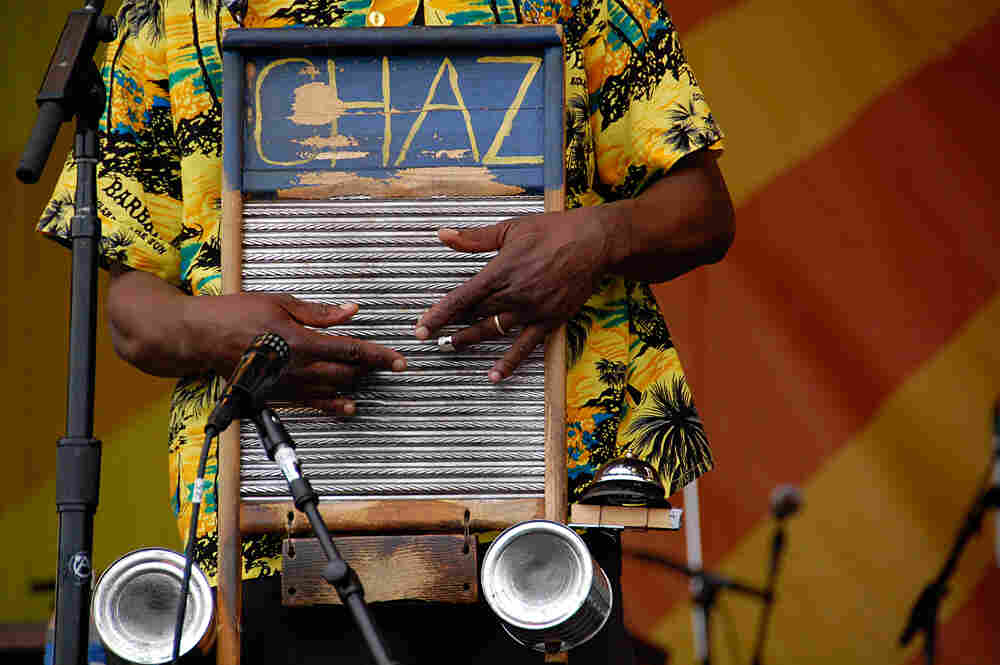 A funny thing happened on the way to New Orleans Jazz And Heritage Festival on Saturday: it stopped raining. The looming tornado watch and 80% chance of precipitation for the city subsided by day's end, and the music continued uninterrupted.

Of course, there was plenty of mud from the preceding day's oversaturation. I sloshed my way through the photo pit at the Acura main stage for a chance to see Tin Men, a trio of washboard, sousaphone and guitar that bends the street-busking aesthetic into a sophisticated, countryfied version of New Orleans music.

Chaz Leary, his middle and ring fingers pressed inside metal thimbles, played his handmade washboard, an instrument that includes two cans and a hotel clerk bell. Together with Matt Perrine and Alex McMurray, two members of the defunct-but-beloved local band, Royal Fingerbowl, Tin Men opened what had to be their largest stage performance ever. Throngs of people had already set up camp here, in anticipation of the Simon and Garfunkel set that would close the festival in another seven hours.

Would this music translate to such a diffuse environment?

Affirmative. Tin Men made some eclectic but inspired choices for their set, opening with Jimmy McHugh's "On the Sunny Side of the Street," before moving on to Danny Barker's "Palm Court Strut" and "Holy Cow," an Allen Toussaint song popularized by singer Lee Dorsey. Chuck Berry's "Maybelline," a Sousa march, and Dirty Dozen Brass Band's "Blackbird Special" were also among the tunes.

These Tin Men didn't need heart. They had plenty to spare.