Accessibility links
Native To NOLA: Kitchen Sink Klezmer, Young Brass Bands : A Blog Supreme Klezmer is hybridized everywhere the Ashkenazy diaspora leads, and brass bands pop up everywhere horns are taught. But in this city of cultural borrowing and everpresent tradition, both the New Orleans Klezmer All-Stars and the Hot 8 Brass Band fe... 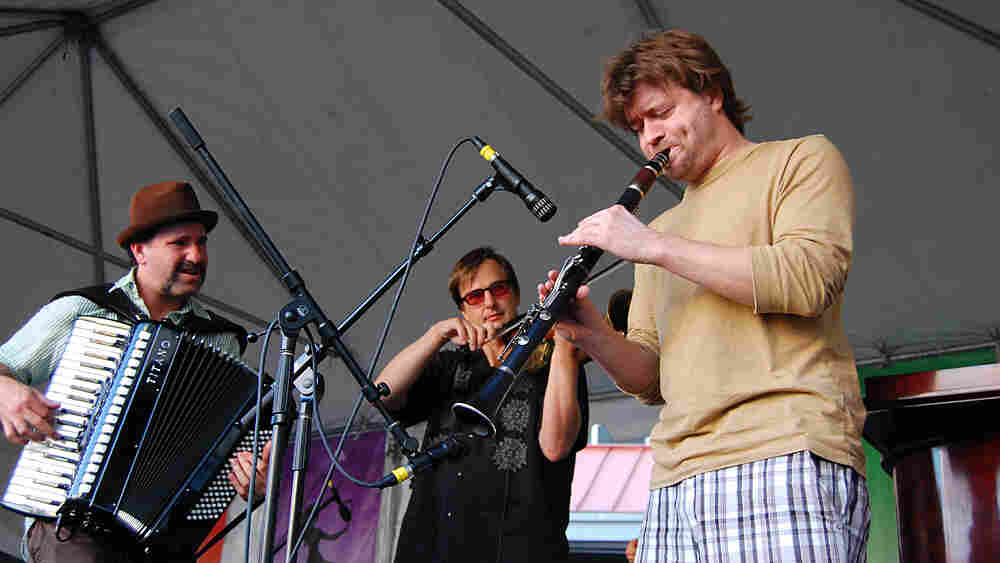 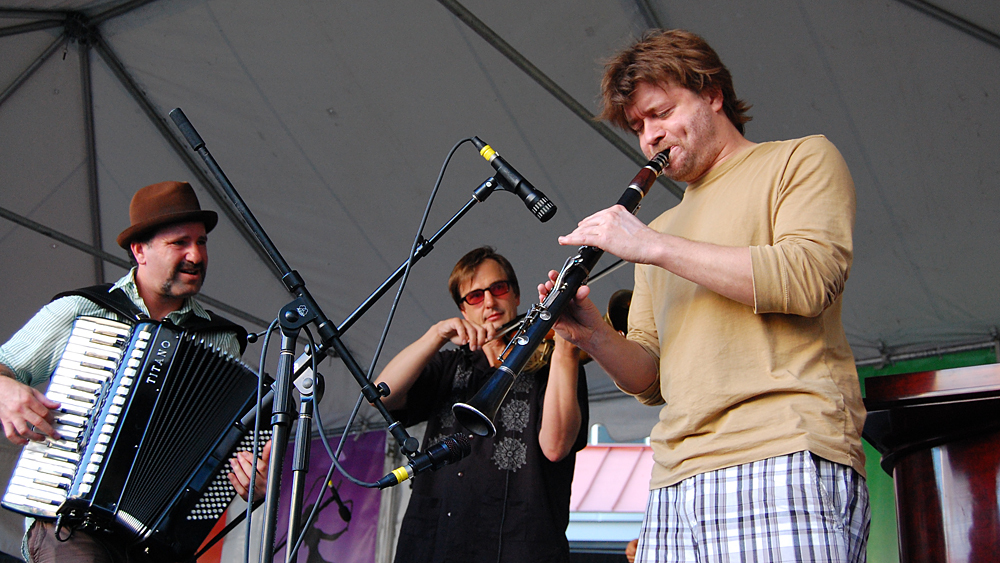 Jewish communities are hardly written into the central narrative of New Orleans history. But open cultural exchange is. Which makes the New Orleans Klezmer All Stars as unsurprising as they are talented.

Think about the trademarks of klezmer. Its sinuous clarinets play major roles in early jazz; its accordions are just as important to zydeco music. And it's a fundamentally a dance music -- New Orleans has an unquenchable thirst for that, too.

Of course, as the last act on the Lagniappe Stage of the first Sunday at the Jazz and Heritage Festival, the All Stars defined klezmer liberally. There were jazz lines from a saxophone, rock 'n' roll lines from an electric guitar, backbeats from a drum kit. They joined an electric bassist, a Stroh violinist, and, of course, a clarinetist and accordion player. So seamless and fun was their tradition mindmeld that a small coterie of people started dancing in the aisles and in the front of the stage -- and this was a seated show.

Only a few minutes after the All Stars began, the Hot 8 Brass Band closed out the Jazz and Heritage Stage. Brass bands are at the beating heart of the city's musical life; trumpets and sousaphones appear on every other street corner. But for an out-of-towner, it's hard to imagine how vividly alive that tradition is until you see a group like Hot 8. 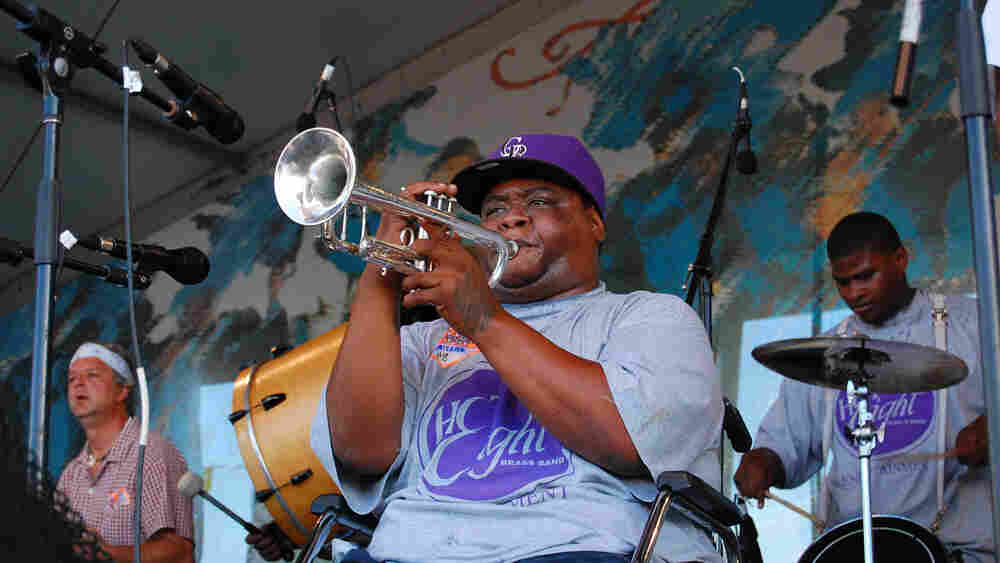 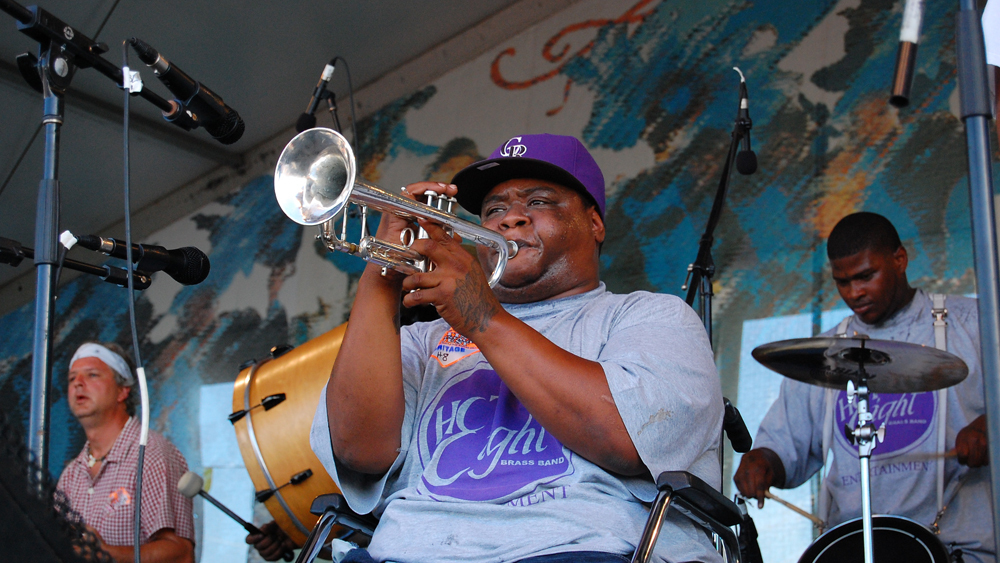 Hip-hop, electronic pop, and rock, broadly considered, are the musics of today's young people. Neither of these things generally compel people to play most of the instruments normally seen in brass bands, and New Orleans certainly isn't immune to our growing entertainment monoculture either. In a city with declining public school music education and Lil Wayne as a folk hero, you'd wonder if kids here would start to see the brass band tradition as passe.

Perhaps it's true in some respect, but not for the members of Hot 8. They're an intergenerational crew, but compared to the Treme Brass Band I saw the previous week, they certainly skew young. They dress like it, too: t-shirts with purple lettering, bright purple kicks, flat-brim Colorado Rockies baseball caps (because the colors are purple and black, see). Their selection of tunes, and the beats behind them, leaned toward funk, hip-hop and R&B -- they're known for their version of "Sexual Healing."

Hot 8 gave the impression that it was trying to express the aesthetic of a younger culture through the brass band. As someone invested in young people's relationships to instrumental improvisation -- while remaining a fan of Lil Wayne -- I was very happy to see the renewal of the tradition. And I was even happier to be moving along to the music.

It's tempting to say "only in New Orleans" to describe both these groups. This is, of course, not true: klezmer is hybridized everywhere the Ashkenazy diaspora leads, and brass bands pop up everywhere horns are taught. But in this city of cultural borrowing and everpresent tradition, both groups felt right at home.