Accessibility links
'Treme,' Episode 7: Civil Dysfunction Meets Civil Disobedience : A Blog Supreme Two dead bodies, police brutality, closed businesses and the double dealing of an election season: the New Orleans of Treme is at cross purposes with itself. And yet, its citizens still find ways to make music. 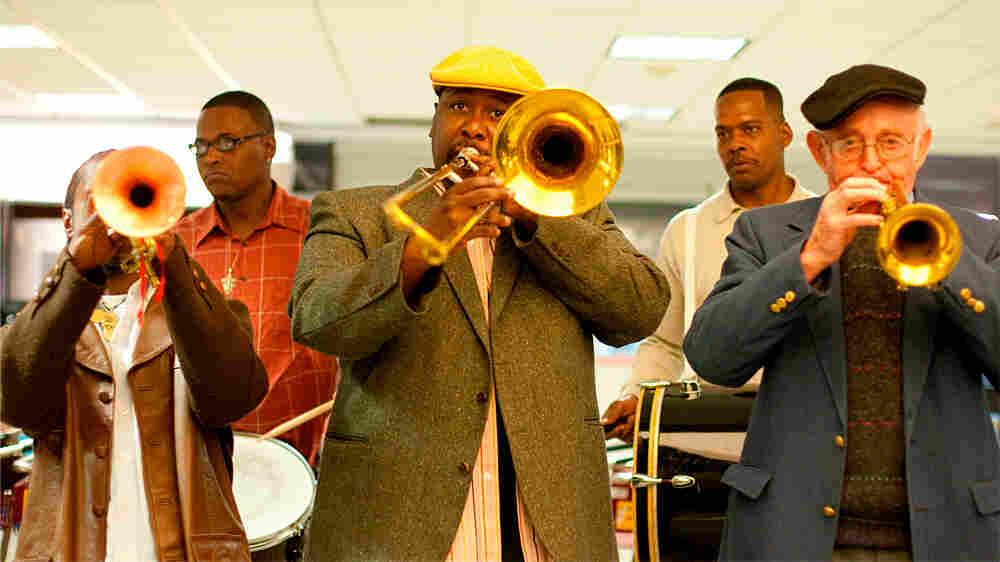 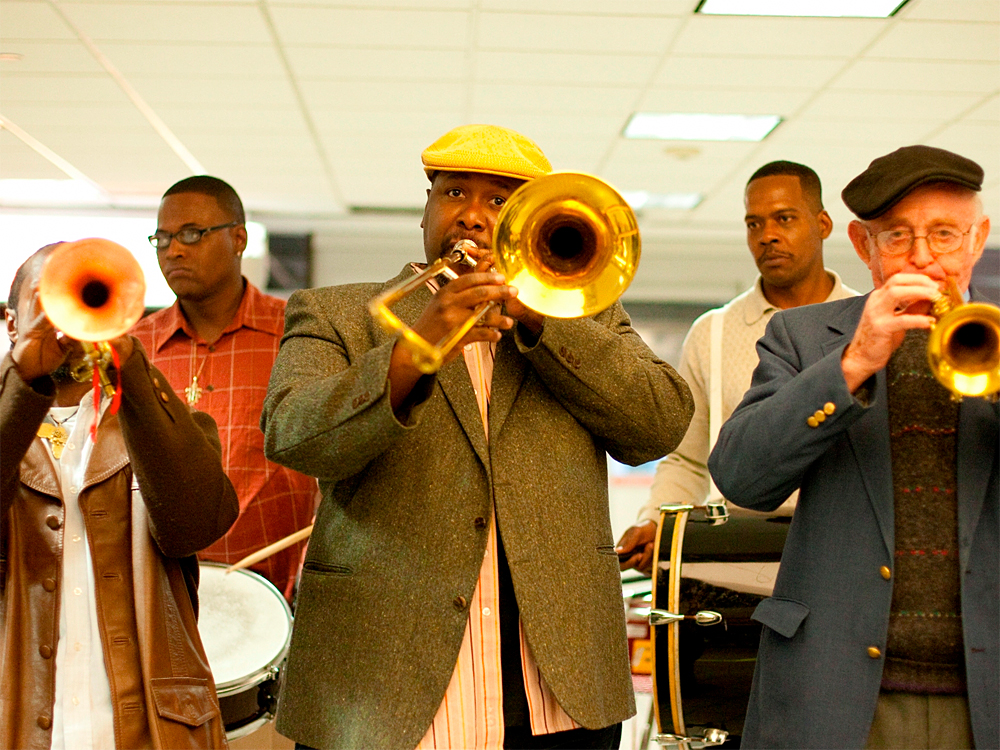 Wendell Pierce slide-synchs along with actual New Orleans musicians at the airport.

Times are not good here. The city is crumbling into ashes. It has been buried under a lava flood of taxes and frauds and maladministrations so that it has become only a study for archaeologists. Its condition is so bad that when I write about it, as I intend to do soon, nobody will believe I am telling the truth. But it is better to live here in sackcloth and ashes, than to own the whole state of Ohio.
--Lafcadio Hearn, 1879

Hearn's quotation, voiced by John Goodman's Creighton Bernette, rings eerily true in the post-Katrina New Orleans of Treme. Episode seven of the first season gives us two dead bodies, police brutality, closed businesses and the double dealing of an election season. And yet, the unique artistic spirit that defines New Orleans persists, on the backs of those determined to honor its traditions in spite of the natural and man-made disasters.

To talk about some of those artistic expressions (HBO's full playlist here), I'm joined once again by Josh Jackson of WBGO.

Patrick Jarenwattananon: The live music in this week's episode seems to revolve largely around two bands: the ad hoc airport group that Antoine plays in, and the Pine Leaf Boys. We heard bits and pieces of four tunes from the airport band: "Li'l Liza Jane," "Basin Street Blues," "Whoopin' Blues," and "Ooh Poo Pah Doo" (featuring James Andrews and Troy Andrews, aka Trombone Shorty). That last one is an inside joke, I understand. And who else is in that band?

Josh Jackson: I guess the joke could be two-fold. First, James and Troy sit in on a song written and performed by their grandfather, Jessie Hill. "Ooh Poo Pah Doo" may be one of my favorite New Orleans songs ever. It has the line, "I won't stop tryin' till I create a disturbance in your mind," which I believe is the purpose of good radio or any art of seduction. Anyway, Shorty is the guy always getting the gig, a cause of great disturbance in Antoine Batiste's mind.

Jack Fine is the older gentleman on trumpet. Mario Abney, a young talent, is the other trumpeter. The modern brass tuba inspiration, Kirk Joseph, plays sousaphone. The clarinet player is Doreen Ketchens, who performed in the streets of the French Quarter for many years and has traveled the world as an ambassador of New Orleans music. 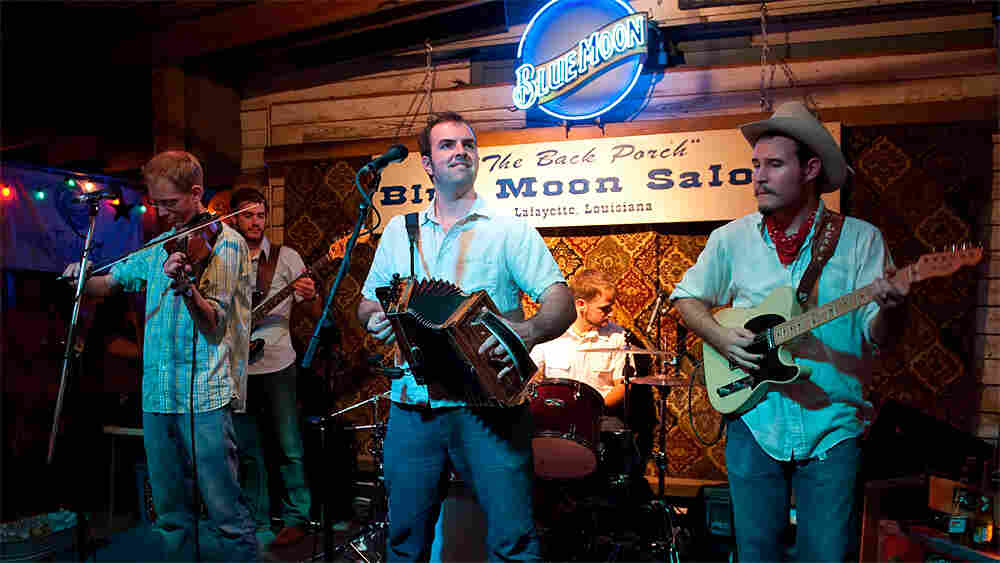 PJ: And then we hear the Pine Leaf Boys do a whole bunch of their material too: they play a sort of Cajun folk music. Tell me more about these guys. If this is early 2006, this is just about the time that they're beginning to make a name for themselves, no? I mean, they're bringing this stuff abroad ...

JJ:: The Pine Leaf Boys are the youngest incarnation of a tradition that is hundreds of years old. Cajun music is based on the old ballads that were handed down from Nova Scotia's Acadian exiles, who came to Louisiana in the second half of the 18th century. These songs are traceable back to the French, though the influence of German and English elements are also in it. The music is mostly two-step and waltz forms, perfect for dancing in the many "country" music halls of South Louisiana.

The accordion is a relatively late addition to the music's history. Wilson Savoy from the Pine Leaf Boys plays a wonderful accordion; his father, Marc, is the master craftsman who makes the instruments specifically to play Cajun music. See one here.

PJ: The Pine Leaf Boys play at Tipitina's too. I know I passed it while I was down in New Orleans, but I didn't get to see music there -- I know it only by reputation. And while we're talking important musical landmarks, I recognized Davis inside the Louisiana Music Factory.

JJ:: Louisiana Music Factory is one of the best record stores in America, even if it isn't the most digital-savvy place. Their in-store performances are what make the place such a community establishment, and I have found many great records upstairs in the vinyl collection.

Tip's is a landmark music club in New Orleans. It started in the late 1970s and adopted a popular Professor Longhair song, "Tipitina," as it namesake. The whole place exudes a certain reverence to Fess, from the moment you see his bust at the entrance (the handiwork of Coco Robichaux), to the towering image of him above the stage. We're already past this point in the Treme timeline, but I thought I would mention the first live national broadcast from New Orleans post-Katrina was from Tipitina's -- I was the field producer. We presented Galactic, Hot 8 Brass Band, and Big Chief Monk Boudreaux with Donald Harrison on NPR's Toast of The Nation 2005-06. Yea you rite!

PJ: You know, that scene where Antoine makes sure that Danny Nelson's grandson picks up the horn comes off a tiny bit contrived to me. But the point behind it seems absolutely true, and it's something you said last week: New Orleans/Louisiana music culture renews itself so far. Having the young-ish Pine Leaf Boys so prominently featured and having Trombone Shorty make multiple cameos speaks to this.

JJ:: "So far" is the key. American influence has been the enemy eraser of Louisiana's distinctive culture. That includes our unquenchable thirst for petroleum-based energy sources.

PJ: Elsewhere, the Annie and Sonny performance scene in this episode is another "hint hint" kind of moment. The song is "Those Lonely, Lonely Nights," and the line that caught my attention was "since you've been gone." But the source material itself is another classic New Orleans R&B ballad, I take it?

JJ:: Oh yes, the late Earl King original for Johnny Vincent's Ace Records. Earl was a blues guitarist and songwriter of note: Jimi Hendrix performed "Come On" on Electric Ladyland. Professor Longhair's signature song, "Big Chief," was penned by King. Earl was an early protege of Guitar Slim (of "The Things That I Used to Do" fame), and he had an office at the now-defunct Tastee Donuts on Louisiana Avenue and Prytania Street. He even made a record called Glazed.

PJ: By the way, while Annie seems to struggle with the Pine Leaf gig, it very much seems like she'll catch on -- with Steve Earle as her backer.

JJ:: Once she gets the feel, she won't lose it. It's very infectious.

PJ: We also hear music at Danny Nelson's funeral: the gospel hymn "His Eye Is On The Sparrow," sung by Danon Smith, and then, of course, "I'll Fly Away" from the brass band (the Eureka Brass Band, to be exact). I think that's like the sixth or seventh brass band in seven episodes, by the way. And it's not the only New Orleans funeral we've seen either.

JJ:: The New Orleans funeral is a certain cultural marker about how New Orleans people deal with death. Same as they have lived: with music.

PJ: And to round out the live music, there's your boy Washboard Chaz playing for Janette's porta-restaurant -- good to see she landed on her feet in some way. (Ooh! I spotted an inside joke! Her sous-chef Jacques lands at Bayona, the restaurant run by Susan Spicer -- the real-life figure who Janette is based on.) Anyway, about this music: really spare, but really interesting, texturally.

JJ:: That's the Washboard Chaz Blues Trio playing at Bacchanal, a great place for drinking wine and socializing to good music. He's also in a really interesting group called Tin Men. Chaz Leary deserves the same kind of attention the Carolina Chocolate Drops have been getting. He taps into the country blues music of both the Mississippi Delta and the Piedmont, and he also fits in the great Creole songs and Texas Swing. His new album, Washboard Rodeo, is really good.

PJ: Ok, so enough about music for a moment. Does it also bother you somewhat that John Goodman's character is so transparently a voice of the city? You know, with the YouTube rants, and the quoting Lafcadio Hearn and all that? And all the other political rants in the show aren't helping -- the tale of LaDonna's brother seems to be an illustration of how criminally irresponsible the criminal justice system is. Of course, it's tempered because Goodman is so good at playing an irritable man -- and because it rings so true ...

JJ:: So much of Goodman's character is a testament to the late blogger, Ashley Morris, who was one of the more vocal writers about post-Katrina New Orleans. Lafcadio Hearn is a reference to an important writer and chronicler of New Orleans, second in obscurity only to George Washington Cable. Goodman's character doesn't bother me much because Creighton Bernette represents some very real reactions of a high-speed internet culture versus bureaucratic handwringing, slow response on a policy level and inept governance. There's a lot to complain about.

PJ: There is this whole issue of the upcoming election season at play. How the Republican Federal government allegedly isn't anxious to allow poor black people to move back to New Orleans because they represent Democratic votes. How Davis gives up his gadfly campaign basically for a bribe. How, as Creighton says, the electoral politics prevents a unified response to the hurricane aftermath. And again, it's all a bit of a polemic, but it's all true to the city, I take it.

JJ:: Politics has rarely been an noble part of the city's history. There are many current and former examples to support that statement. Just follow the smell, and the indictment registry of U.S. Attorney Jim Letten and the Department of Justice.

PJ: There's also Albert Lambreaux, who makes me proud with his pride. That scene where he gets arrested, bow down, and is brutalized for it, is really something. (Especially in contrast with similar scenes in The Wire, where our sense of moral right was so much less defined, and Clarke Peters was on the police side of the equation.)

JJ:: Big Chief has a moral compass that's pegged to certitude. It has resulted in violence twice -- this time he was the recipient. Otto DeJean and Eddie Vanison from the 7th Ward Hard Head Hunters had his back, but he stood alone for what is fair and just. That's the credo of the heroic.

PJ: Finally, let's end with some music. What else did you hear that struck you?

JJ:: I appreciated that Antoine had Jelly Roll Morton singing "Buddy Bolden's Blues" in his iPod. It sounded like the version with Sidney Bechet on soprano and the recently departed (after 101 years!) Lawrence Lucie on guitar.

The name of the episode, "Smoke My Peace Pipe," comes from a song by Bo Dollis and the Wild Magnolias. Find the original on Polydor Records. Awesome record.

The end credits have been an homage to some of the recently deceased players of note. Last week, we heard "Party Town" from Abbeville's swamp-pop legend, Bobby Charles. This episode, we close with "Helping Hand," from Ferd "Snooks" Eaglin's Smithsonian Folkways recording, New Orleans Street Singer. I fondly remember his pledge drive shows with Eddie Bo and sometimes Ernie K-Doe on a WWOZ program, Billy Delle's "Records From the Crypt." Snooks was a performance-based encyclopedia of music.