Accessibility links
Bill Dixon: An Echo Repeated Forever : A Blog Supreme Bill Dixon, a relentless innovator, educator and trumpet linguist, has died at 84. With Dixon, music wasn't so much something to be conquered, but instead a beautiful problem to solve. 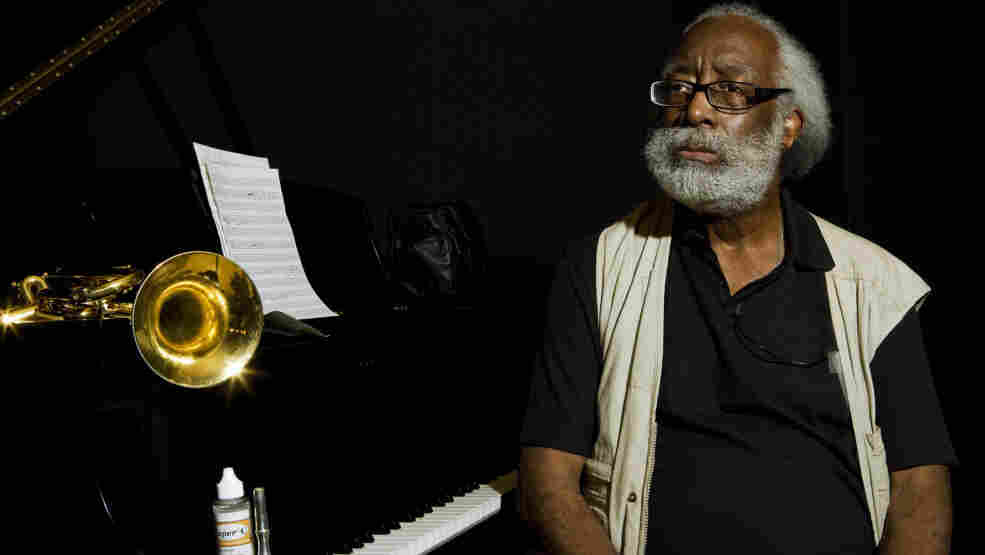 In the teaser trailer for last year's Tapestries for Small Orchestra, Bill Dixon said, "If you told me you couldn't do something in music, that was the thing I tried to do to prove you wrong."

And he always did.

With Dixon, music wasn't so much something to be conquered, but instead a beautiful problem to solve. Perhaps this approach came from his background in painting. Even as he began his musical journey later in his 20s, he sought a trumpet sound in broad, abstract strokes. While little recorded output exists from these early stages, co-led releases with Archie Shepp and an appearance on Cecil Taylor's Conquistador! (1966) are crucial pieces to jazz history.

Spending most of his time teaching at Bennington College in the '70s (where he taught until 1995), Dixon re-emerged to the recording world during the oft-ignored development of avant-jazz in the 1980s. Dixon always worked well in isolation, but what came challenged modern music at large. The improvised compositions heard on the two-volumed In Italy and later Vade Mecum were seemingly formless, never spurred on by the wild rhythm sections that lit a fire under jazz during the dawn of the New Thing. Instead, these pieces unfolded slowly, creeping along like some surreal Italian horror film, full of breathy yet colorful sound.

In 2005, this sound changed the way I thought about space.

At the time, I was still relatively green to avant-garde jazz, attracted to its fire and spontaneous invention. Eager to experience this music live -- Athens, Ga., isn't exactly a hot bed of improv -- my friend Mitch and I flew up to New York City for Vision Festival X.

In the midst of much raucous exploration, there was the Bill Dixon Quintet, performing what he then announced as a "work in progress." The shape was long and vacuous -- Dixon's spits, gargles and abstract kinds of blues echoed into space. It was a language that spoke oceanic depth, a trumpet that could mimic a Wagnerian bow across a double bass. The composition's picture never quite revealed itself until the eureka moment hours, or even years, later.

A relentless innovator, educator and trumpet linguist, Dixon has died at the age of 84. He passed away in his sleep Tuesday night at his longtime home in North Bennington, Vt., after a two-year illness.

Thankfully, Dixon was very active in the latter part of this decade, particularly taking a shining to younger sound explorers like cornetist Taylor Ho Bynum. In the liner notes to Tapestries for Small Orchestra, Bynum writes that instead of following the forward momentum of his contemporaries, Dixon "[stopped] the clock and [turned] his gaze inward, towards the infinite potential of the existing moment rather than the moment to come."