Accessibility links
Herbie Hancock's 'Imagine Project': Boomer Nostalgia, Supergroups And Pink : A Blog Supreme A sophisticated pop masterstroke -- or a hot mess? Felix Contreras and Patrick Jarenwattananon have an IM chat about the jazz pianist's star-studded new album, a collaboration with pop and rock stars from around the globe. 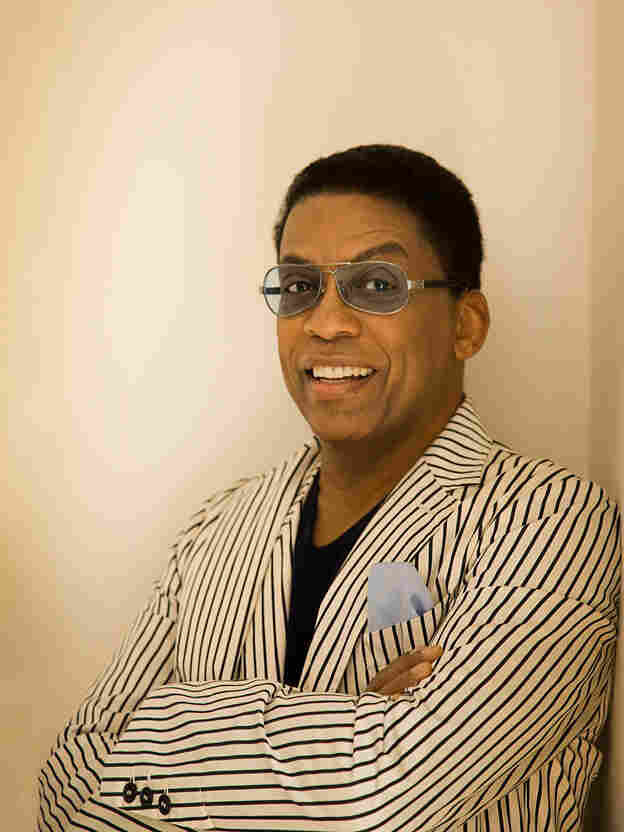 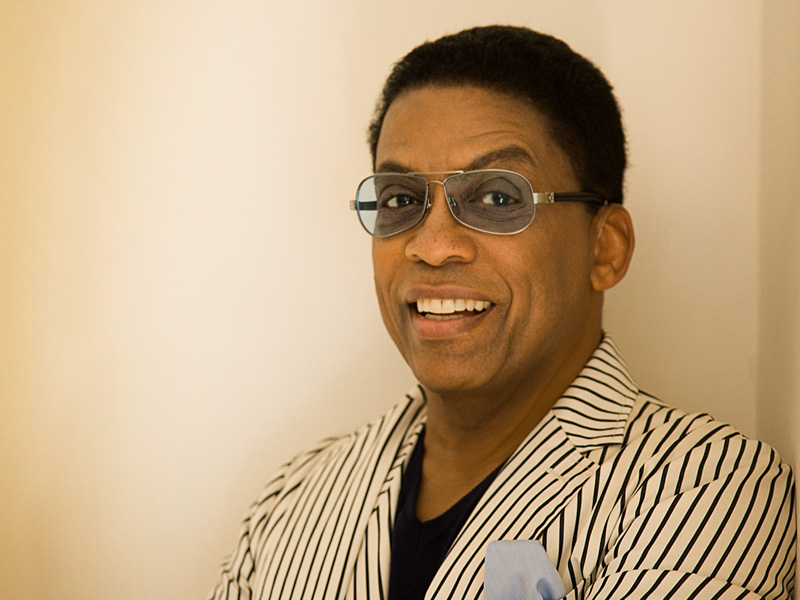 This week, NPR Music is streaming the entirety of The Imagine Project, the new album by pianist Herbie Hancock. Hear the full album preview as part of our Exclusive First Listen series.

Fresh off his Album of the Year Grammy for River: The Joni Letters, pianist Herbie Hancock is releasing a new album next Tuesday, Jun. 22. The Imagine Project is a star-studded collection of cover songs, featuring pop and rock stars from all over the planet. Felix Contreras likes it. I, um … well, hear for yourself in our full album preview. And then, read our IM chat. –Ed.

Patrick Jarenwattananon: Do people know who this Hancock guy is?

Felix Contreras: Hard to tell; depends on their age. Though I have to remind myself he is kind of a name beyond jazz people too. Also, names like Seal, John Legend, India Arie and Pink may stand out.

PJ: Yea for real. Never did I think I would find Dave Matthews and Herbie Hancock together. Those are like the dipoles of my adolescence as a jazz nerd who grew up in a white Midwestern suburb. And about those big names: this isn't the first time Herbie has done this before, round up a bunch of superstars and say, "Hey guys, lets jam out some tunes!"

FC: I guess Herbie being Herbie gets people to try things they wouldn't normally do. Seems there is a level of trust there.

Listening to "Tomorrow Never Knows" now. That drummer Carter Beauford rocks it hard. There's a back-masking guitar solo in there too.

PJ: What do you mean, "back masking"?

FC: A guitar solo played backwards. The Beatles invented that, I think. Vocals and guitars played backwards, which back in the analog days meant running the tape in reverse. That's how the whole "Paul is dead" thing started – but I digress.

PJ: Ah, right, right. You know at very least, there's some solid production on this record. Everything sounds clean, in its right place. (Which is simultaneously kind of one of my chief complaints, but that's later.)

FC: Yeah, but it's more than production, for me it's the song selection. The song list is heavy on Boomer nostalgia. Dylan, Beatles, Lennon, Peter Gabriel …

PJ: Which you readily submit to?

FC: Nostalgia is not a bad thing in the right hands, methinks.

FC: "Space Captain" with Derek Trucks and Susan Tedeschi, for example. That's a lost track from the haze of the early '70s, from Joe Cocker's Mad Dogs and Englishmen period. A bunch of hippies, some from across the pond, some from the South, who grew up with Black music. They couldn't escape the influence.

Plus, Derek and Susan wring it for all the bluesy soul they can get. I'm a fan of her voice and I think God walks through the room every time Derek solos. And Herbie and Derek trading eights in the middle …

PJ: See, that particular track is to me an example of how you can put together a jigsaw puzzle exactly right, and when you see the finished product, it's like, "Is that all there is?"

FC: I can almost see that.

PJ: That piano intro shows that Herbie can still bring it when he wants to. Susan's voice is really quite amazing. And Derek is a badass, true. But it's like the whole is less than the sum of its parts. You know, I'm always suspicious of any supergroup, or any jazz/ish project when people are paired only in the studio.

FC: Supergroups, sure. I've been thinking about this a lot lately. I can dig that; I've seen my share of supergroup disasters.

PJ: Right? Like, I really like when someone decides to put together a regular working band, playing off somebody's strengths and weaknesses to sculpt what the music becomes. They play together, they get to know each other, etc. And they document it. With stuff like this, it's always "take the best of both worlds" -- and you had better be an incredible Teo Macero-on-Bitches-Brew-like producer if you're going to cut and paste correctly.

PJ: True. Given the chance between going to a Jazz At The Philharmonic show with Bird, Diz, Roy, Hawk, Benny Carter, and whomever, and seeing Charlie Parker's regular quintet -- I know what I'd take.

FC: Does Herbie even have a regular band he takes on the road? His touring bands are usually made up of genuine bad-asses. Dave Holland, Vinnie Colaiuta …

PJ: I think he has a regular orbit of musicians these days. Vinnie is often on drums. Lionel Loueke does crazy guitar stuff. But even if his group is solid, man, some of the vocals on this record ...

PJ: The first like 30 seconds of the whole thing, on "Imagine," just that piano intro: it says, "I CAN STILL BREAK YOUR HEART ANYTIME I WANT TO." And then Pink comes in, which is more or less saying to me, "OR I CAN CRUSH YOUR PUNY SOUL."

Not that Pink, or Seal, or John Legend, or Juanes ("OHHH MALA TIERRA EN QUE NACIIIIISTE"), or James Morrison or whomever are bad singers -- they're great singers! But if not guided correctly, often we just get this over-emoted, post-Mariah, American Idol generic belting.

FC: Yeah, over-singing has become a problem. They can take lessons from early Aretha Franklin. One note, no trills or vibrato, and you're devastated.

PJ: I don't mean to be one of those rockist authenticity fetishists, but I like the original "Imagine" a lot. And if you want to re-do John Lennon, you might not even be able to bring early Aretha in to save you if the vision isn't clear -- and I don't get that sense that it is here.

FC: As much as I really like this record, I'll concede a bit of that. And I'm with you, some songs shouldn't ever be re-done. "Imagine" is one of them. Jazz intro, bluesy vocal intro, then an African rhythm with India.Arie. And Jeff Beck thrown in ... because he happened to be in the studio? Because he's a fellow Brit? Lionel Loueke would have made more sense here: African rhythm, the vocal chanting chorus, etc. Cue the Beninese guitar player!

PJ: Hahaha. If only he were so essentialist with his pairing -- oh wait … Sometimes those pairings work fortuitously. But man, that Tinariwen + K'Naan track with your lupine friends, Los Lobos …

FC: Funny, that track with Tinariwen, I didn't hear any Los Lobos personality on it, other than the lead vocal in English by David Hidalgo. And the Spanish chorus on Bob Marley's "Exodus" at the end.

Ok. But you do like this record, no? I'm ready to concede there are a few interesting touches here and there.

FC: Yeah, I like this record. Lots. But our difference in what we hear may be an age thing, I think. Let me try to 'splain: There is a distinct, visceral, emotional reaction to certain songs from the Boomer Songbook. And there is a bit of nostalgia, but mostly it's because there were some great songs written by very talented songwriters. Probably some of the best this country has produced.

PJ: I am not doubting that.

FC: So the selection of material intrigues me. And the selection of the singers, I'm giving Herbie the benefit of the doubt because he's had great big ears, and he may be hearing something that I may have missed. And the arrangements are certainly a varied collection. To me, it reflects Herbie's varied musical backgrounds and expertise. African music, R&B, polished pop, big belter ballad singers. He lived through that as my generation did.

PJ: Give me a highlight for you.

FC: The aforementioned "Space Captain," for the solos and her voice. "Tomorrow Never Knows," for the concept and arrangement, Dave Matthews' voice and Carter Beauford's drumming.

PJ: WOW, WE ARE DIFFERENT PEOPLE. Seriously though, I think there are commendable things that occasionally all coalesce. "The Song Goes On," with Anoushka Shankar, Chaka Khan, Wayne Shorter on soprano -- kind of a sitar, trance-pop thing that I can get behind.

FC: You beat me to the punch on that one. In fact, that track to me offers the best expression of the multi-genre mash-up that these collaboration albums try to get to. It sounds like the whole world -- a very hip world. Can you imagine the conversation between Herbie and the record exec assigned to this project? "Ok; hear me out, I'm thinking Anoushka with her sitar, doubling a vocal by Chaka Khan (doing her best to sound South Asian), I'll solo under the sitar riffs and, oh I know, I'll get Wayne to do his Wayne thing in and out! It'll be awesome!!!" And it is!!!

PJ: Haha! Well, this came out on his own label, distributed by Sony somehow, but I think this was largely self-financed? So he definitely had that conversation with himself. As to your final analysis, well, to each his own, I guess.

FC: I think having Chaka and Wayne on the same track keeps this world spinning on a very hip axis and helps keep global warming at bay. Seriously, we NEED to keep thinking about those kinds of counterintuitive pairings. And for the record I HATE that phrase but it's the only one that worked. Contemporary music needs to have folks who push themselves.

PJ: I wouldn't go so far as saying I loved how he pushed himself, but I hear you. I'm glad that Herbie is pushing. I just think his skills at recombining are kind of a "take your lumps with the good" situation. But when the good is good, even for just a fleeting moment ... that's why we'll always care about Herbie, cause it's SO good, even at 70 years old.

FC: OK, full circle, I'm in complete agreement with that last statement. I'm gonna recue "The Song Goes On." That rhythm is serious.

PJ: All right. And pardon me if I prefer the Herbie-Wayne hookup on the second Miles Davis quintet -- but you know, nice to know they're still after it when they want to be. The daydreamer in me kinda wishes they wanted to be in a more straight-up jazz context (did I just type that?) but you know, I'll take what I can get.

FC: Dude, can you imagine trying to make music after you've made the kind of music they did with Miles back then? Those 'Plugged Nickel' albums are so good they scare me. I would be afraid to ever play again after reaching that kind of musical perfection. I'm willing to hear them together in whatever context they come up

PJ: Fair enough. Here's to more of that, whatever it is.