Accessibility links
Why We Love Anthony Braxton : A Blog Supreme The saxophonist and composer was recently celebrated in a two-night, 65th birthday tribute concert. Here is what some of the performers, including Marilyn Crispell, Steve Coleman and Nicole Mitchell, had to say about their friend and mentor.

Why We Love Anthony Braxton

Why We Love Anthony Braxton 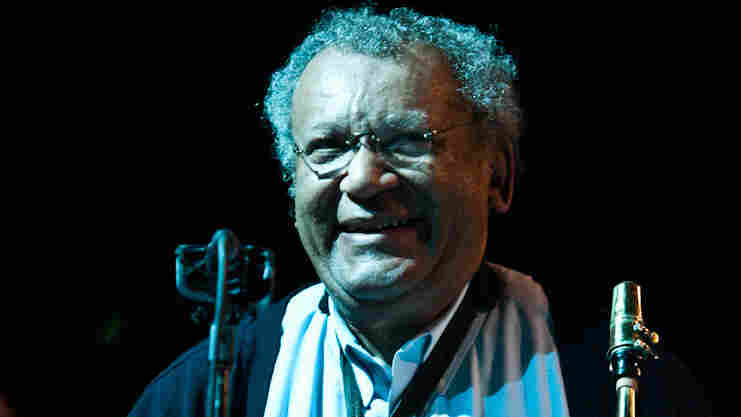 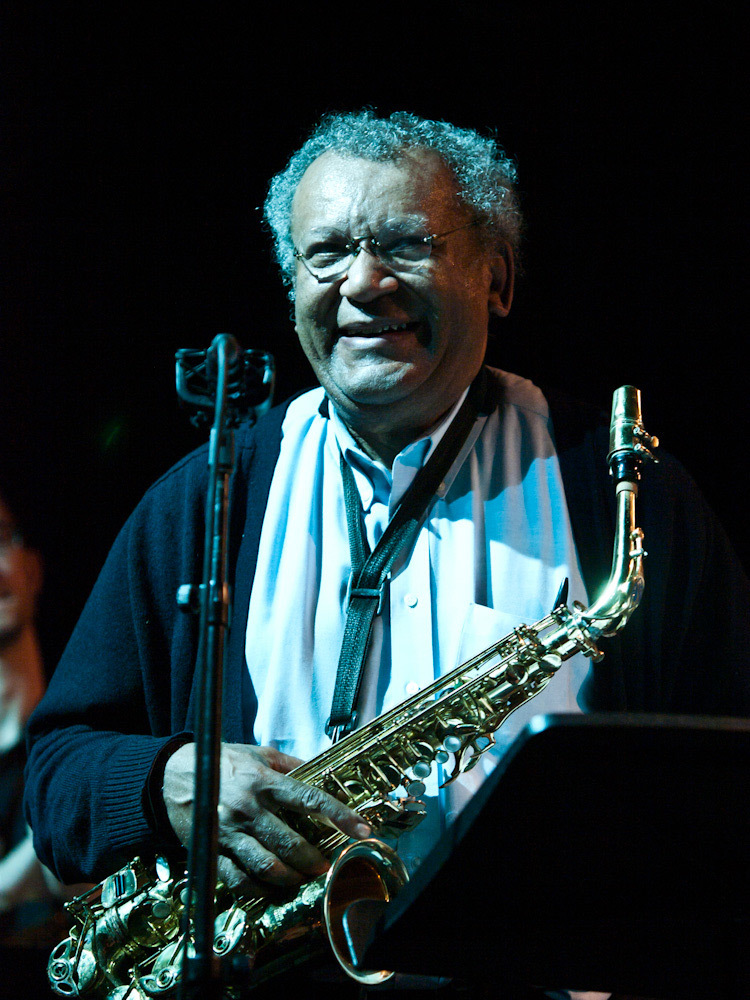 It was part of a two-night event where musicians like John Zorn, Steve Coleman, Nicole Mitchell and Dave Douglas performed in tribute to Braxton. I spoke with many of the musicians; here is what some of them had to say about Braxton's music and the deep, abiding influence it has on their creative paths. Braxton, of course, has the final word.

How has Anthony Braxton changed your life? We would love for you to leave a comment below.

We spent ten years together as a quartet. It was a very special time in my life and I think in everybody else's, too. It's hard to put into words. We became like a family. I haven't seen Anthony in years and, when I saw him today, he said, "We're still family" ... I think he's one of the most amazing musical figures of this time period. He is one of the major people to transform improvised music in the world.
--Marilyn Crispell, composer/pianist

We've known each other since 1969, when we met in the mud in a cow pasture in Belgium after he played the Amougies Festival. We started rapping and found we had all of these common interests: in European classical music, in jazz, of course. So we invited him to play with our group, Musica Elettronica Viva. Then he asked me to play a duet with him in Chicago at the Contemporary Museum of Art. He helped me put out my first LP. I owe him that for starters ... We've played together a lot -- around 50 times in the last 40 years. It's Anthony's idea to put together a set of recordings, so I'm gathering up old tapes. All we need is a crazy record producer who wants to put out a ten-CD set. Anthony thinks it should be at least ten CDs.
--Richard Teitelbaum, composer/keyboardist/electronic musician

I knew I wanted to do more challenging, adventurous music, but I didn't really have a plan. I showed up at Wesleyan, started working with Anthony, and was like, "What is this?" As a conservatory-trained singer who made the switch to experimental music and improvisation, it's been really liberating. Actually, it's been completely transformational.
--Ann Rhodes, vocalist/composer 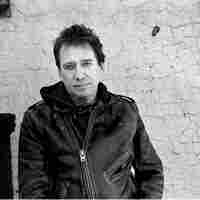 I had the pleasure and honor of working with Anthony for nine years, from '85 to '94, in a quartet with Marilyn Crispell and Gerry Hemingway. It just had magical chemistry. The group evolved a way to play his music that was not so much about the soloist, but about the ensemble. It was democratic in a way that anything we played would work. It's a very, very flexible, modular approach. For example, if we had five major pieces in a set, in between, there might be sub-assignments for me and Gerry. But outside of that, anyone of us could do anything else. That means I could pull a piece from another part of the book and play it as notated music as a background. I could improvise. What was special about that group unlike any other I've played in is a maximum balance of responsibility and freedom. Anthony has a way of empowering his sidepeople ...
--Mark Dresser, bassist

It's a unique way of thinking about composition, and, at the same time, it leaves a tremendous amount of space for people in the ensemble to do what they do best, to assert their agency as performers within the environment as defined by Anthony's music. It's typical of everything about him: the way he interacts with people, the way he is as a teacher and educator ...
--Steve Lehman, saxophonist/composer

I consider him a hero, a friend, but mainly a mentor ... No matter where you're coming from, musically and intellectually, he always has something to offer in terms of how you can extend the scope of generating your ideas. Or how you can subvert notoriously conventional aspects of your music -- namely, not to think of composing written music and improvising as separate ways of operating.
--Matt Welch, bagpiper 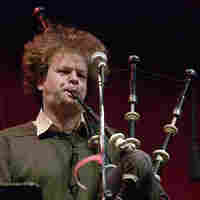 On the drive down -- I live in Sante Fe, N.M. -- my wife said, "The thing about Anthony's music is that it's almost like he's drawing maps of places that none of us have ever been ..." And it's true. He's creating compositions of places and ideas and concepts and textures that are absolutely miraculous. And we as musicians find ourselves in the beautiful position of trying to go to these molecularly bizarre, gorgeous places ...
--Chris Jonas, woodwind player

I'd like to say something about Anthony Braxton: [scats] "Dut dut dut dut dut -- duh ..." My man, Braxton, where you at? This guy means so much to us. It's a pleasure to play in tribute to you -- absolute pleasure. I've been following you for years, ever since before I wasn't born. ... And then I read a book -- I think it was Graham Lock, Forces in Motion, is that the name of it? Your ideas blew me away; everything you talked about blew me away. All of the questions you didn't answer also blew me away -- there was a lot of stuff you wouldn't say to him, so I was determined to find out for myself, which I still have yet to do. The second I met Jonathan [Finlayson, trumpeter, with whom Coleman was performing], I told him about you and your whole crew. And we're just honored to be a part of this. What can I say? If it wasn't for you, we wouldn't be here.
--Steve Coleman, saxophonist/composer, from the stage

I'm a member of the AACM [Association for the Advancement of Creative Musicians] and his legacy as an independent thinker is so important to the younger members. His music demands all of who you are: your spirit, your intuition, your mind as a composer, your skills at reading and being able to adapt to new situations in the moment, being able to communicate with others through gesture. Every part of you is being utilized, which makes it very demanding and also really special.
--Nicole Mitchell, flutist/composer

You work with him and come out of it wholly energized, inspired, and thinking about art in a different way. The more people we can get that to, the better. We need this kind of creativity. We're desperate for it. So that's why we put this celebration together: to have a platform for him to pursue his vision to the fullest extent and then to pull as many people into that vision as possible.

There are the existent models for organizations that raise money: the philharmonics and the operas and the places that do jazz. Anthony's a black guy with a saxophone. It's like you can go and play a quartet gig in Europe or at this club here. But he wants to do a four act opera with a twelve-person cast and a 50-piece orchestra. We're doing sonic genome projects with 100 musicians playing for eight straight hours. His ideas completely transcend the boxes that people try to put him in.

So the Foundation is here to support him, but ultimately the point is not to get 10,000 people doing Anthony Braxton's music -- it's to get them doing their own music with a kind of vision, integrity, and beauty that Anthony has done with his own. We're here to celebrate all of the ripples that his creativity has generated by bringing these people together in one room. The energy is so fantastic.
--Taylor Ho Bynum, cornetist and board member of the Tri-Centric Foundation

These guys and gals represent America and [our] composite reality. What a strange period we find ourselves in. The Internet is here. Things are upside-down. A new reality is coming in. My hope is that in the coming cycles somehow room will be made for non-marketplace artists who are trying to pursue their work.

One of the main strengths of America is that we have so much creativity. We take it for granted. I think about when we landed a guy on the moon. Two years later, no one even thought about it anymore. It's far out ...

Suddenly, in this time period, we find complexities. The times are changing. Geopolitical dynamics are changing. Vibrational dynamics are changing. But everywhere I go, especially in America, I meet men and women of good will. I meet artists who have taken on the disciMpline in the old tradition, with total dedication and love. And it's still happening now, just like a hundred years ago. We continue to turn out generations of artists who are ready to make the sacrifices that have to be made. What a life! So, at 65 years old, I find myself here this evening. If you have to be 65, this is the best way to do it.
--Anthony Braxton, from the stage