Accessibility links
Sunday At Newport Jazz 2010: Matt Wilson, Violins And 'Serious Fun' : A Blog Supreme At this year's 2010 CareFusion Newport Jazz Festival, Alex W. Rodriguez of WBGO and Patrick Jarenwattananon are serving as production assistants for the NPR Music live webcast and recording. They recap the music of the second full day. 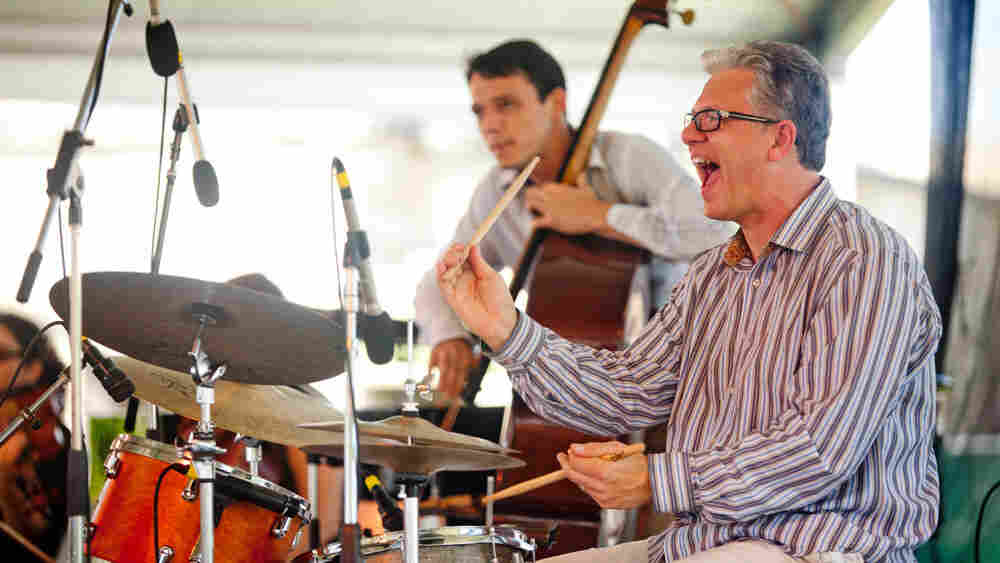 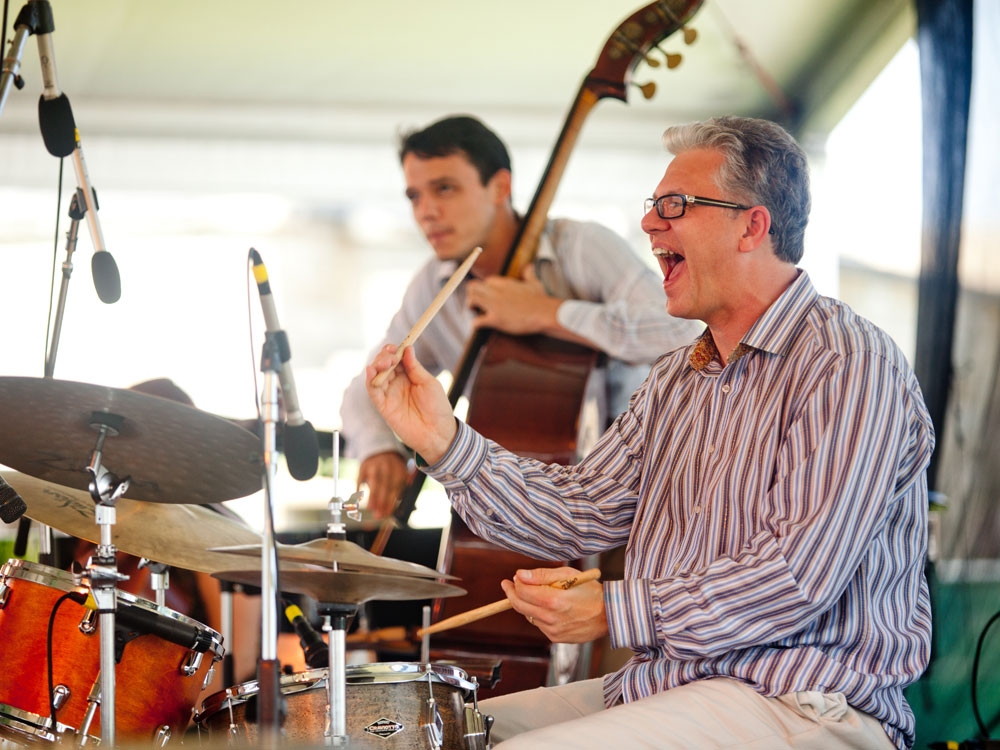 At this year's 2010 CareFusion Newport Jazz Festival, Alex W. Rodriguez of WBGO and Patrick Jarenwattananon served as production assistants for the NPR Music/WBGO/WGBH live webcast and recording. Between running files and documents from stage to stage, they got to see a little music. They met up late on Sunday night over IM to discuss what went on during the closing day of the festival. Also, be sure to check out our full coverage of the festival, including photos, archived downloads and more, at npr.org/newportjazz. --Ed.

Alex W. Rodriguez: Well, I think Matt Wilson wins this year's Newport Jazz Festival, although it was a close race. Judging by the number of captivated smiles in the audience, at least.

Patrick Jarenwattananon: I think you could make a case for that, pound for pound. I will say, though, he carried a lot of pounds in his band. Eight people! Plus guest vocalist! What about Matt made it so good?

AR: What impressed me was that even with the extra bells and whistles, the band still embodied his quirky exuberance. The pizzicato passages in the strings especially amplified that. He managed to play some crazy out stuff and yet framed it in a way that the audience completely got it.

PJ: Two Ornette Coleman tunes, and stuff that went crazier than that. We should say, literal bells and whistles: his band actually rang bells and blew a little recorder/whistle-like wooden flute.

AR: Yeah, all a part of his act. But it wasn't imbued with the seriousness and severity of some free jazz. If anything, it was serious fun.

PJ: A fair amount of "out stuff" today too: Ken Vandermark's Powerhouse Sound, plus Marshall Allen/Matthew Shipp/Joe Morris. Both played to limited audiences, but I think they certainly spoke heartily to a few fascinated souls. I heard folks express fascination with the wind synth that Marshall Allen brought, and Vandermark just skronk-rocked the eff out.

Of course, there was plenty more great stuff "in the tradition," as it were -- including swinging parts of Wilson's set.

AR: And "serious fun" as well -- Herbie Hancock rocking the keytar, John Faddis cracking jokes and squeaking out high notes. He introduced Josh Jackson as "Gelato." He pretended that his bassist was from Outer Mongolia, then asked him how to say "thank you," and told the audience "Merci!"

What was even more impressive, though, was the purity of his sound. He made even the ridiculously hard stuff seem effortless.

PJ: He's still got the high note thing down, for sure.

AR: Indeed. Herbie's set was less virtuosic but just as eager to please ... and the crowd ate it up. And since he was at the Fort stage, we're talking thousands rather than the hundreds on hand for Faddis.

PJ: George Wein/Jason Olaine booked some captivating performers. Say what one might about Chris Botti; he can keep a crowd on its feet.

PJ: But yea, about this thing on embracing your audience: MOAR FUN IN JAZZ PLS. I mean, you know, sometimes you'll go to these clubs and the leader doesn't say anything, and looks mad awkward up there, as if eternally dissatisfied with his lot in life. Not today.

AR: For sure. Even the smaller-stage artists knew how to connect with the audience. And the relative intimacy of the setting helped make that happen.

PJ: Maybe it was the beautiful, perfect sunny day that had everyone happier.

AR: Definitely. Gretchen Parlato comes to mind; she also really put on a show for the Quad Stage crowd in the afternoon. Her music is just so well-constructed, relaxed and musical -- a perfect fit for the early afternoon slot. And as one of the few bandleader vocalists, she took advantage of the opportunity to connect with her audience.

PJ: Sure. Gerald Clayton and members of the Houston mafia, Kendrick Scott and Alan Hampton, form a pretty phenomenal backing band. And she shapes them some really nice arrangements. Lots of musicians stayed around the Quad Stage to catch the following act: David Binney's quartet.

AR: I missed that -- another one worth combing the archive for?

PJ: Full of heavy, heavy hitters: Craig Taborn on acoustic piano, Eivind Opsvik on bass and Brian Blade on drums. Brian Blade! He never makes a single move that isn't immediately surprising, and like, "I didn't know I needed that sound in my life RIGHT NOW."

Binney can blow up a storm too. And while his music can feel like "modern jazz" at its most cerebral, he really sung today. In fact, Gretchen Parlato literally sung with his band on a tune -- he's written for her voice before.

AR: I'd say that there's something about the Newport vibe that brings that out of these performers. For example, I have heard Conrad Herwig's Latin Side All-Stars a bunch of times, but their closing set on the Harbor Stage stood out. Maybe it's because they played "The Latin Side of Herbie" just as Hancock himself had just finished his set.

PJ: It seems like Herbie's always had a little bit of that Latin tinge in his work ("Watermelon Man," etc.), but it came out here in full effect.

AR: Definitely -- these weren't just cynical salsa-meets-jazz charts. Some really hip stuff, especially their encore rendition of "Watermelon Man." Between the history, the heavy hitters in attendance and the collective spirit of all the greats who have played there, everyone really came to play.

PJ: Ben Allison's band is so, so good. Dave Douglas' Brass Ecstasy is the same. And Jason Moran and the Bandwagon -- I didn't get to see 'em, but you know how I feel about them dudes.

AR: We were blessed with an abundance of amazing music, being played by musicians at the top of their game.

PJ: Here's how deep it went. We had at least four great featured violinists in Mark O'Connor (Saturday), Jenny Scheinman (with Ben Allison), Skye Steele (who soloed with Matt Wilson), Lucia Micarelli of Treme fame with Botti. There were other supporting violinists too: the "bows" of the Jazz Mafia Saturday, and Matt Wilson's wife, Felicia, was a part of that string quartet too!

AR: There you have it -- what else is there to say?

PJ: Dude, this was mad fun! I hope we can both be back next year. (Without catastrophic Internet outage of course.)

AR: I'll second the former, and its follow-up.