Accessibility links
A Look Back At The Music Of Abbey Lincoln, Pt. 1 : A Blog Supreme A Blog Supreme contributor Lara Pellegrinelli has interviewed Abbey Lincoln many times about her life's work. Here, she surveys the career of the late singer, activist and songwriter, picking musical examples to match.

A Look Back At The Music Of Abbey Lincoln, Pt. 1

A Look Back At The Music Of Abbey Lincoln, Pt. 1 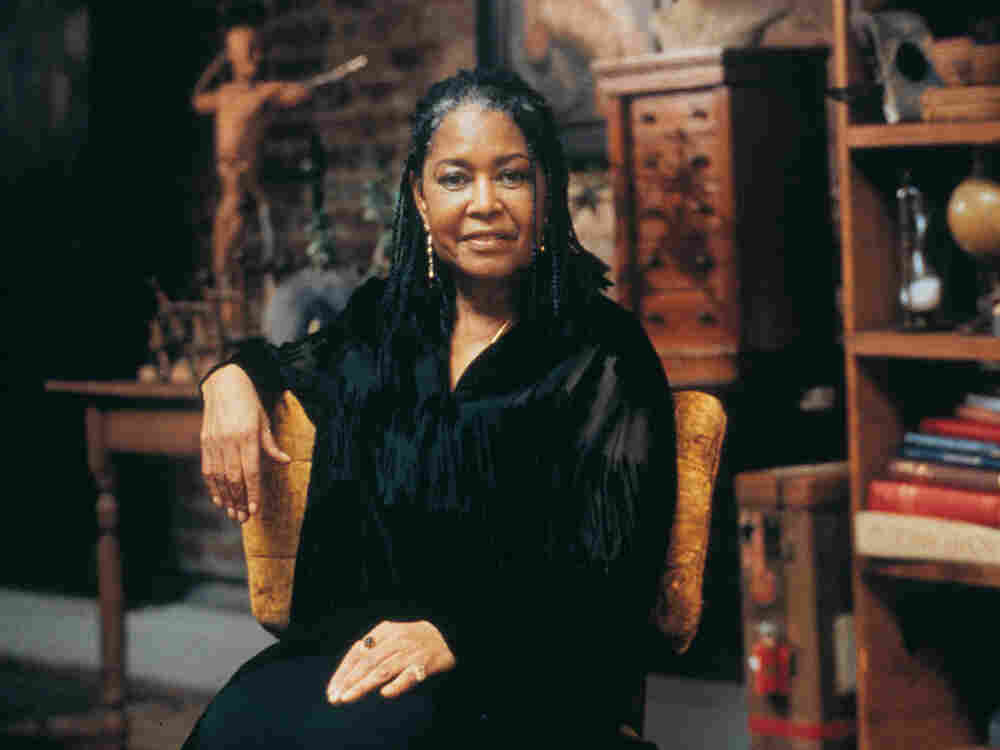 Abbey Lincoln, photographed for her 2000 album Over The Years. John Sann hide caption 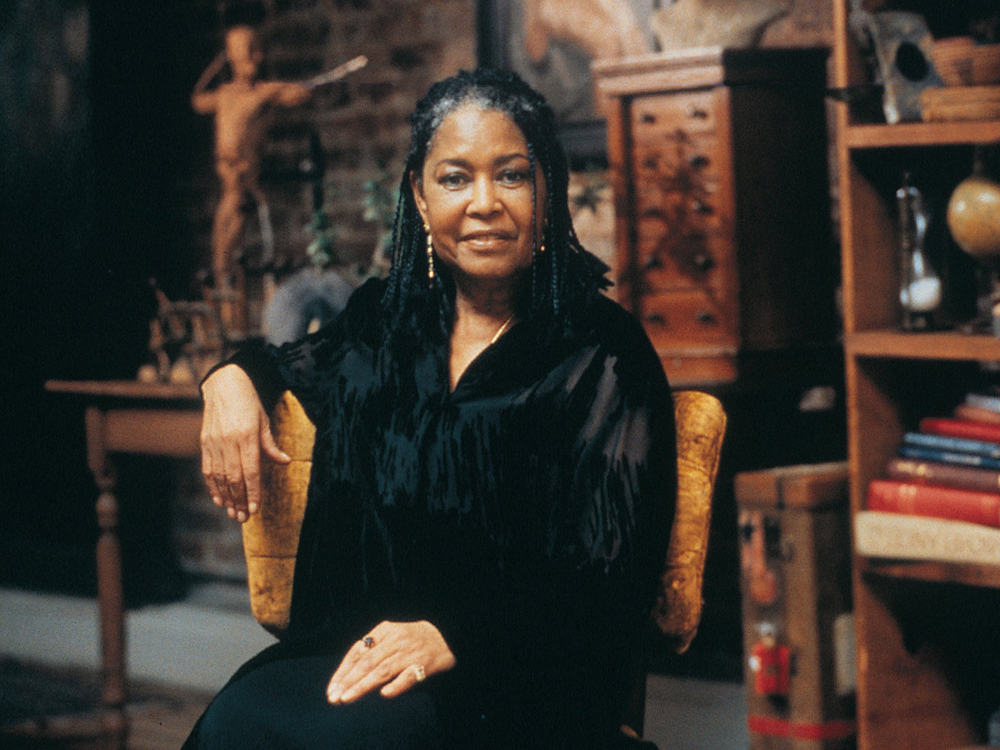 Abbey Lincoln, photographed for her 2000 album Over The Years.

A Blog Supreme contributor Lara Pellegrinelli first interviewed Abbey Lincoln in 1998. Since then, she's had many further occasions to talk to the late vocalist and songwriter about her life's work. Here, she surveys the entire career of Abbey Lincoln, complete with musical examples which chart Lincoln's growth into a compositional force. Part two will run soon. --Ed.

I've been reading the various tributes to Abbey Lincoln, but it seems that almost everyone has missed the point when it comes to why this woman's music was important and what her place in the history of jazz ought to be. Yes, she was a great singer, one of the best of her generation. She was also a passionate agitator for civil rights, playing an instrumental role in her then-husband Max Roach's groundbreaking Freedom Now Suite. Although both are noteworthy accomplishments, ironically, those who praise Lincoln for the way she sang tend to overlook what she sang.

Her most substantial and potentially lasting achievement is her own body of compositions, around 40 songs in total. They are not innovative in terms of melody, harmony or other technical features. Rather, they are significant first and foremost simply because she wrote them and found opportunities to perform and record them.

To this day, jazz musicians lack recognition as composers. When Lincoln first emerged in the mid-1950s, it was unthinkable that a singer -- let alone a female singer -- would write the majority of her own material. 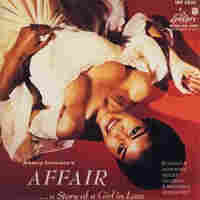 The cover art to Affair: A Story of a Girl in Love. Liberty/EMI hide caption

It took her until the 1970s to cross that bridge. Lincoln's early records were filled with classics from the so-called American popular songbook: Sentimental, escapist fodder by Gershwin, Rodgers and Hart, Kern and Porter. One only has to see the cover of her debut album on Liberty -- the same label that recorded calendar girl Julie London -– to know what was really being sold: Lincoln is photographed stretched out on her back, her breasts nearly overflowing from the bodice of her dress.

The arrangements, by Benny Carter and Marty Paich, are also a pretty package, bow-tied with strings. They're purely pop, with nothing in Lincoln's forceful but straightforward delivery to suggest that she would become a jazz singer.

A strikingly beautiful woman, Lincoln told me that she was often judged her by her appearance; people assumed that she couldn't be attractive and a good musician. Luckily, she found an early ally in manager Bob Russell, the lyricist who wrote "Crazy He Calls Me," "Do Nothing 'Til You Hear From Me," and "Don't Get Around Much Anymore." He was the first to encourage Lincoln to study song lyrics, giving her books on vocabulary and semantics.

By the time she recorded her second album, That's Him (1957), she had already started a quest for alternatives to the popular song. Her ensemble here consists of top-shelf jazz musicians: Trumpeter Kenny Dorham, saxophonist Sonny Rollins, pianist Wynton Kelly, bassist Paul Chambers, drummer Max Roach. And Lincoln takes on material associated with Billie Holiday, including this dramatic reading of the troubling "My Man."

"When I came to the stage," Lincoln would later say, repudiating torch song masochism, "the women, the divas, were singing about a man who wasn't much. I did that for a minute and thought, 'Well, this is a drag. If he's nothin', I'm nothin' neither.'"

So she asked fellow vocalist and playwright Oscar Brown, Jr. to write her a song about a beautiful man, a man like her father or her brother. Countering standards of beauty dictated by white society, as well as the kind of racialist descriptions found in lyrics like "Good For Nothin' Joe," Brown breaks new ground with "Strong Man": "Hair crisp and curly and cropped kind of close / Picture a lover like this. / Lips warm and full that I love the most / Smiling between every kiss."

Of course, Lincoln told me she still had a bone to pick with Brown over those lyrics: "'I'm in love with a strong man and he tells me" -- not that he is --"He tells me he's wild about me.' Dig it?"

Through the late 1950s and early 1960s, Lincoln's singing gradually became more conversational and idiosyncratic, her rhythm loosened up. Her sense of pitch purposefully became flatter, more nasal and blues-oriented. She started calling herself a jazz singer as a statement of black pride. For her repertoire, she turned increasingly towards the music of her peers in the jazz community: Brown, soon-to-be-husband Max Roach, vocalist Jon Hendricks, saxophonist Stanley Turrentine, flutist Herbie Mann, trombonist Julian Priester, pianists Randy Weston and Thelonious Monk.

It wasn't long before she would begin writing her own lyrics. The first to appear on record is an anxious blues, full of stress and strain: "Let Up," from the 1959 recording of Abbey Is Blue. 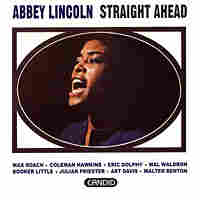 The cover art to Straight Ahead. Candid hide caption

By the time Lincoln recorded Straight Ahead in 1961 for journalist Nat Hentoff's Candid label (months after the Freedom Now suite), she wouldn't include any material from the popular songbook on the album whatsoever. Lincoln contributes lyrics to tunes by Monk, Priester, and Mal Waldron, who accompanies her on his own composition "Straight Ahead."

Lincoln's sound is also a far cry from the proper young singer who made Affair just six years earlier. She had caused controversy in those years by wearing her hair naturally; it sounds like let her voice has gone natural, too.