Accessibility links
What Does Bitches Brew (The Beer) Taste Like? : A Blog Supreme To celebrate 40 years of Miles Davis' Bitches Brew, Dogfish Head Brewery will release Bitches Brew ale. In order to verify its Brew-ness, we decided to taste the imperial stout and honey beer fusion for ourselves. 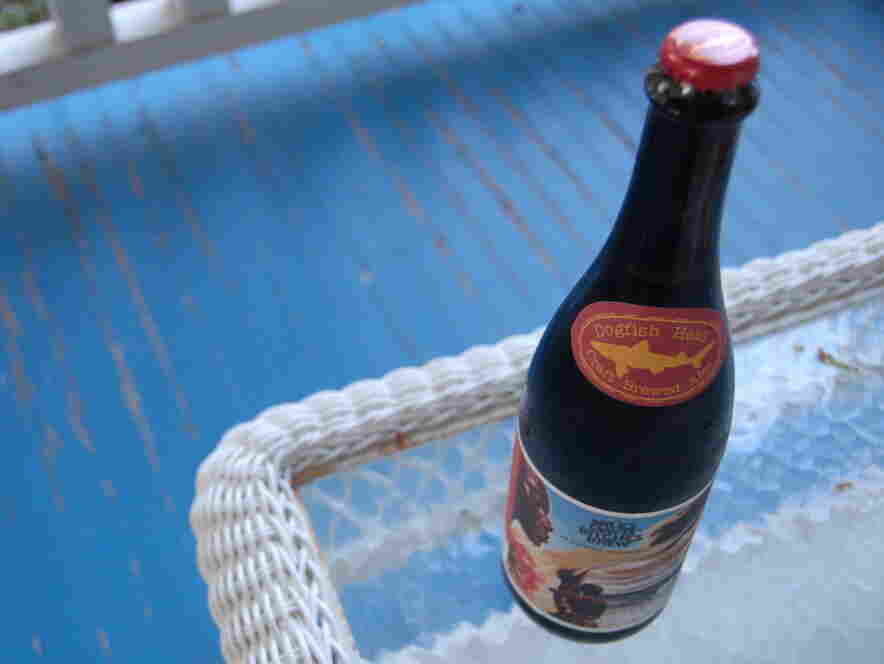 Like the album, Bitches Brew ale is a cut and paste affair with three strands of imperial stout and an East African honey wine. Lars Gotrich/NPR hide caption

Last summer, I sat on my front porch with Orr Shtuhl, Washington City Paper's Beerspotter, and paired six summer jazz songs with six summer beers. Sun Ra smoked funky grooves with a La Sancerroise au Gruyt and Charles Mingus' "Ysabel's Table Dance" was seduced by a Verdi Imperial Stout. To quote one torn commenter about our project, "I don't know whether to hate you or make you my hero."

On Tuesday, to celebrate 40 years of Miles Davis' Bitches Brew, Dogfish Head brewery will release a limited edition Bitches Brew ale. And in order to verify the Brew-ness of such an ale, I invited back Orr, as well as our Blogger Supreme Patrick Jarenwattananon, to taste the imperial stout and honey wine fusion.

Pouring out the first glass, there was no foam and a lot of black. 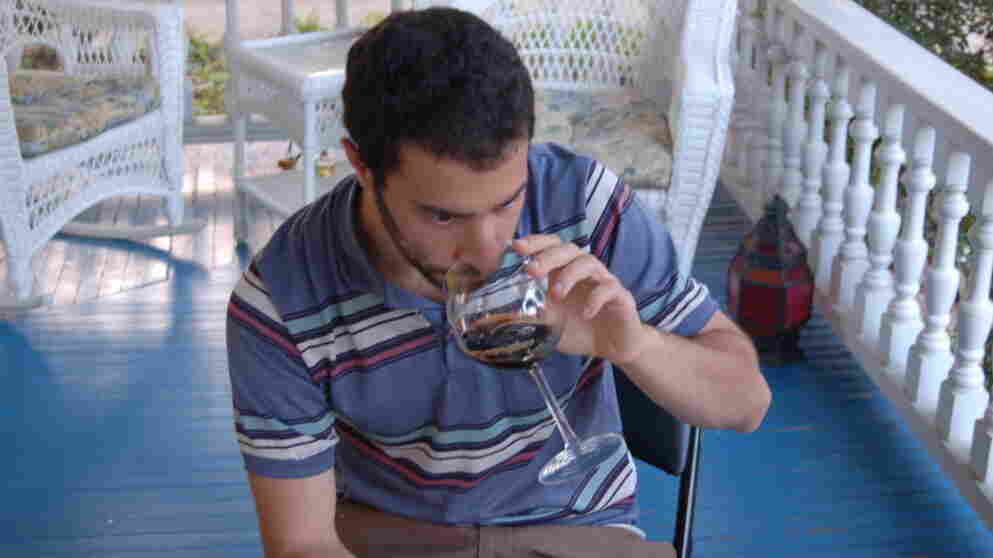 Lars Gotrich [NPR Music]: What are we seeing, Orr?

Orr Shtuhl [Beerspotter, Washington City Paper]: Well, it's not quite black. It's one of the darkest stouts I've seen, but not the darkest. While a stout in the glass looks black, you always look at the edges to see the character. The edges have a dark amber color, while at the middle, it’s going to be pitch black.

Lars: I love the sediment I get when I tip the glass.

Orr: It's very viscous. We're drinking out of fancy wine glasses, which lets you see how it clings to the side of the glass. It leaves a clear wall like a syrup. 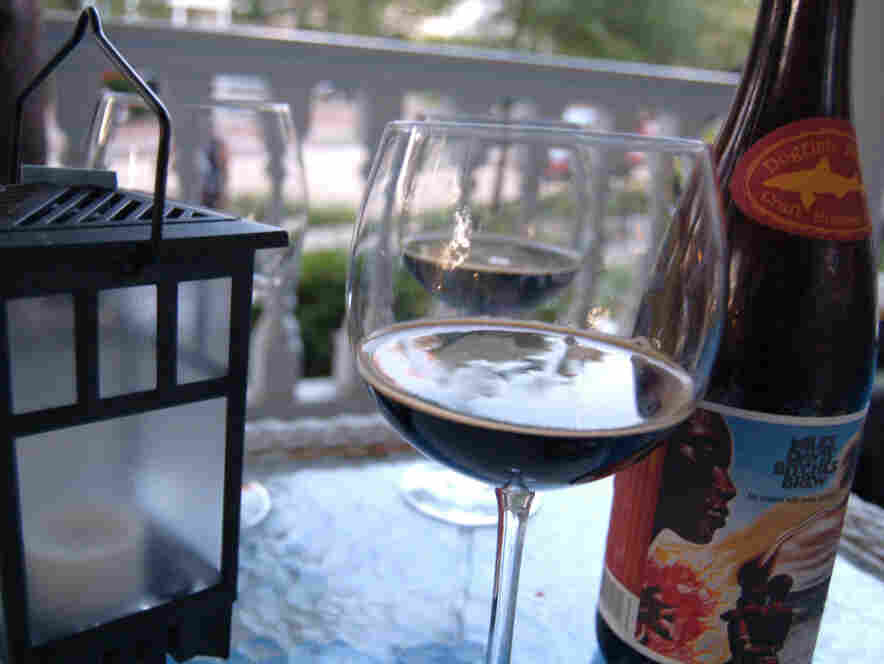 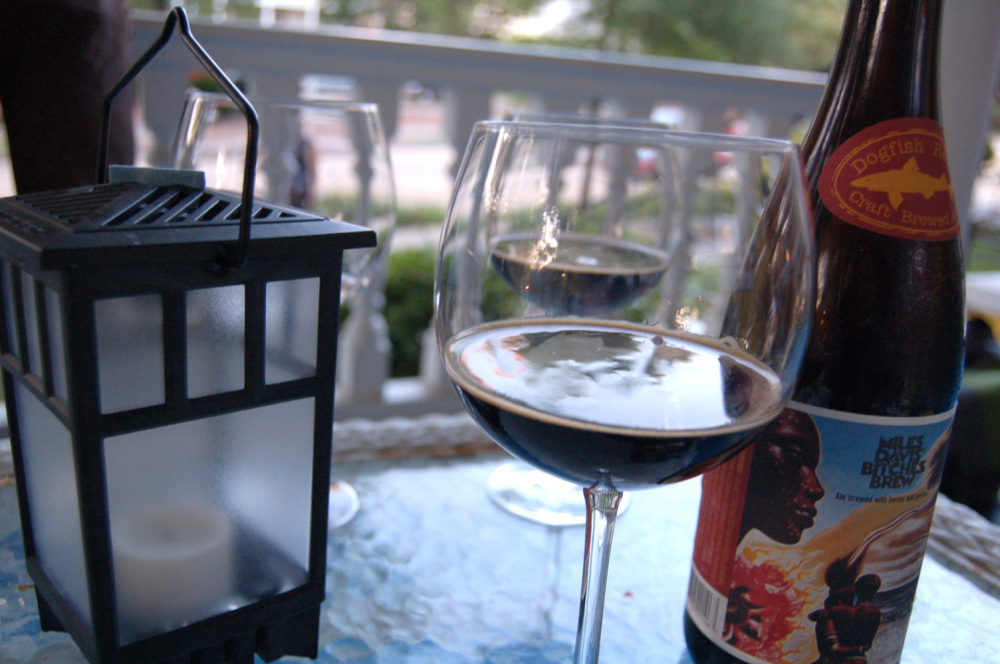 Orr: It's three parts imperial stout and one part tej, an African mead. An imperial stout is a strong version of a stout, which is a dark ale that usually has notes of chocolate, coffee and/or molasses. It's usually very sweet and, in this case, has a very low hop profile.

Tej is an African mead wine (or honey wine) and in place of hops, it uses gesho root. Today we use hops for flavor. Beers like IPAs are really hoppy, fresh, fruity, bitter, floral, and delicious. Originally, though, hops were used as a preservative, and some herbs and flowers are also preservatives. Before European brewers used hops, they'd use herbs like rosemary. In Africa, one of the plants they used was gesho and that's what's still used in this traditional honey wine and what's used in one of the four parts of this beer.

Lars: I think we should drink some. We've been waiting too long! [After a sip.] I get an immediate hit of coffee.

Patrick Jarenwattananon [NPR Music]: It's certainly malty compared to hoppy, but it doesn't quite hit me in the way of a pure imperial stout. There's a definitely an edge rounded off of it.

Orr: It feels like honey in the way that it sits on your tongue. Many imperial stouts will have some roast elements because the dark color of stouts comes from the roasting of the barley before it's used. The level of toasting determines the color of the beer. A stout can be very heavily roasted -- that's why you get these coffee flavors, chocolate flavors. This one really sits on your tongue and one minute afterward, I can still taste it. The mead wine lingers longer, it doesn't have that bitterness to clip off the finish. To me it tastes like old-timey Cola.

Lars: Well now that you say that, it's like when you go to a restaurant and the fountain is extra syrupy that day. And that's the best time to drink Coke, you know? 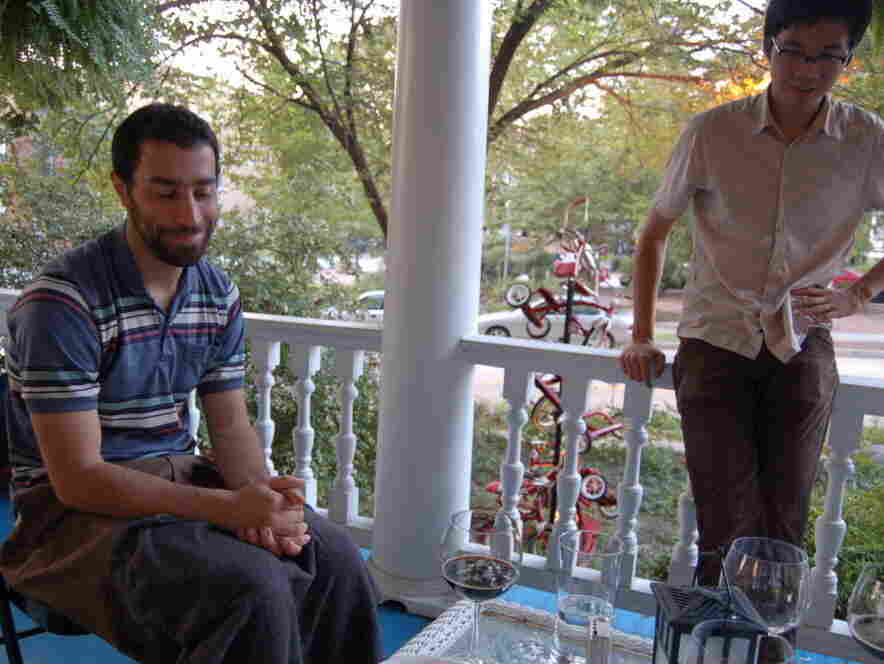 It was a little buggy on the front porch, so Patrick lent Orr his sweater to cover his mosquito-bitten legs. Lars Gotrich/NPR hide caption

Orr: It's almost does feel like a concentrate and that's why it's certainly worth drinking out of a smaller glass. ... Dogfish Head's beers are much like its president, Sam Calagione -- they're not soft spoken. They're like the fun guys at parties -- they're loud, they talk a lot, they present themselves to you pretty openly. I think this beer definitely fits that mold. It's got a lot of flavors going on, and they're all out front. Right away you get these roast coffee notes, thick, sweet molasses, and really complex sweetness in the honey, which is what I really like about this. You can can make lemonade with white sugar, but if you make lemonade with honey instead, and it gives such a rich, floral sweetness. I think that's what you're getting in this beer. It's a lot of flavors that just sit on your tongue like a down blanket that just hangs on top of you.

Lars: I like that image a lot, which makes me want to transition into the music.

Patrick: The Bitches Brew album is kind of like this beer -- it's a weird cut and paste. It's coming from jazz, from guys who worked with Miles Davis. And then he instructed them to basically jam with electric instruments, in a not entirely swing way. Then Davis and his producer, Teo Macero, recombined what they did in the studio. The same way you have these three different breeds of stout and then this "exotic" honey wine, it's sort of how the album turned out: three parts jazz and one part ineffable something else.

But I think In a Silent Way is a slightly better analogue for this beer. I know I'm going out on a limb here, but [Bitches Brew] is really complex, almost strident -- full of rich sounds like Fender Rhodes, the screeching Miles Davis trumpet, bass clarinet, soprano sax, electric guitar and the drums clipping along. In a Silent Way tends to have more of a rounder edge. Maybe it's just that we're talking about the honey component so much, but I definitely feel like it goes down easier despite everything that's going on in the beer.

Lars: I think that's fair. But Bitches Brew is a little abrasive. It's not harsh Albert Ayler-style noise, but it hits you over the head the first time you put it on. It's like the first whiff of coffee I mentioned earlier. The funny thing is that I don't even drink coffee. 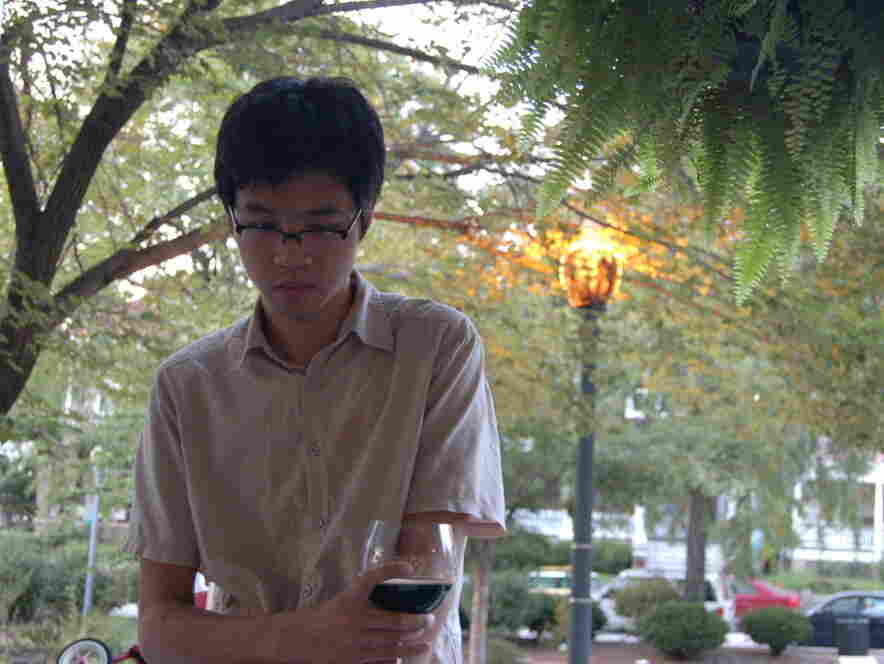 Orr: This beer is one of the least aggressive beers I've ever had. I mean that in a good way. It's very rounded, exceedingly mellow, and you'd never get that it was 9 percent alcohol. It's a very nice introduction, actually, to the imperial stout style. It's one of the tamer, more accessible ones I've had recently. If I had to draw a musical analogy, I'd be more inclined to pick Billie Holiday -- it's a mellow mood that anyone can get into. If I had to give a Budweiser-only drinker an imperial stout, this is probably one of the easier ones for them to try.

Lars: Although "Party in the USA" should totally be a beer.

Orr: Right. As far as the pairing, I don't know how academic [Dogfish Head] intended to be, but I think the only common point is high quality. If that's all we got, then it's nothing to complain about. If you want to get really high-minded about it, I think this beer would go better with a more mellow album.

Patrick: Maybe we should move onto another track. Perhaps "Spanish Key"?

Orr: This sounds like more of a late night track. I'm familiar with good beer, but new to jazz. I latch onto more hypnotic, groove-based songs like this. It has more rock touchstones and easier to dig into for me. It's less frenetic to me like the opener, "Pharoah's Dance." I'd rather be drunk to this song.

I think that tasting is more conducive to groove-based music because you're repeating the same thing over and over. You're enjoying the same flavors -- every sip is more faint. Really what you're doing is putting yourself in this mood to enjoy something continuously and when you have a more groove-based track, it actually meshes pretty well. I could listen to this song on loop and drink the whole bottle.

Lars: It's a 17 minute song, so you could probably make it through the whole bottle if you wanted to. 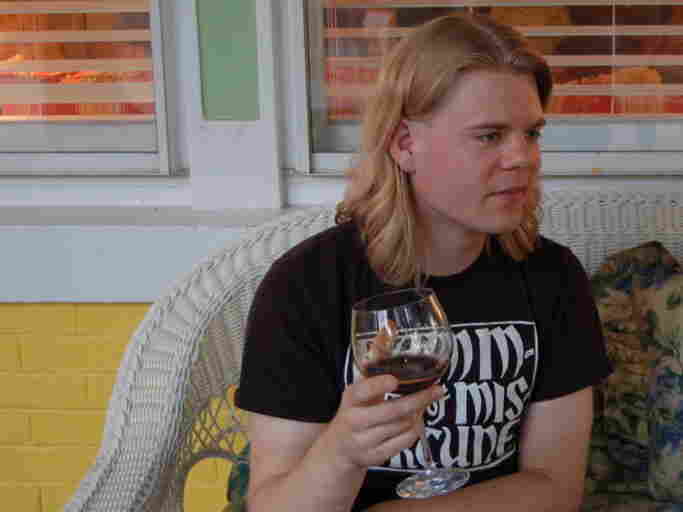 Lars wonders, "What would a beer inspired by Painkiller's Guts of a Virgin taste like? Probably better not to know." Patrick Jarenwattananon/NPR hide caption