Accessibility links
What Were They Like In High School? Today's Jazz Stars As Teens : A Blog Supreme What were Robert Glasper, Eric Harland and Jason Moran like as teenage musicians? Their band director at Houston's High School for the Performing and Visual Arts remembers. Robert "Doc" Morgan shares a few anecdotes.

What Were They Like In High School? Today's Jazz Stars As Teens

What Were They Like In High School? Today's Jazz Stars As Teens 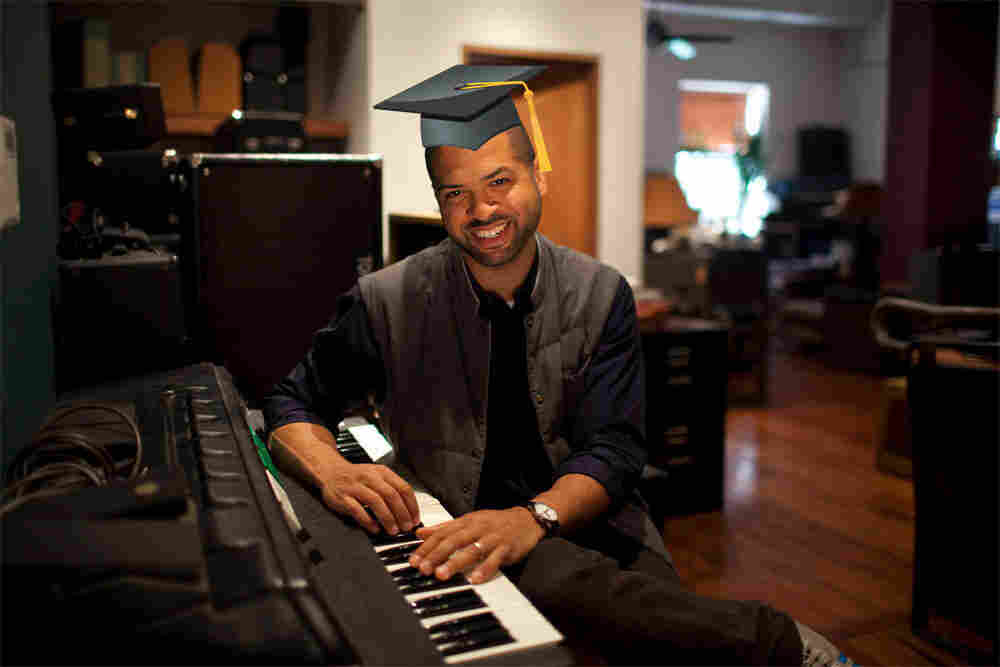 Our rendering of what Jason Moran might have looked like on graduation day. Photo Illustration: Lars Gotrich/NPR/Photo: Courtesy of the John D. & Catherine T. MacArthur Foundation hide caption

Tonight, pianist and recent MacArthur Fellow Jason Moran plays a free show in his hometown of Houston. He'll be appearing with a jazz band from Houston's High School for the Performing and Visual Arts, his alma mater.

Moran is far from the only acclaimed jazz musician to have emerged from HSPVA. Fellow pianists Robert Glasper and Helen Sung are alumni, as are drummers like Chris Dave, Eric Harland, Herman Matthews, Kendrick Scott and Jamire Williams, and plenty of other instrumentalists with successful careers: Walter Smith III, Mike Moreno, Geof Bradfield, Andre Hayward, Alan Hampton ... Which leads to the question: Why do so many great jazz musicians come from this one small high school in Texas?

I've been investigating that thought, talking to band directors past and present. For decades, the program was run by Robert "Doc" Morgan, who taught many of these great musicians, and brought the school's jazz program to prominence. I'll have fuller responses to the question at hand soon. For now, I just wanted to share some anecdotes about what these great musicians were like in high school. Here are a few of "Doc" Morgan's stories about Moran, Eric Harland and Robert Glasper:

Oh Robert. I've got a great story about Robert's audition.

Now, Robert, interestingly, auditioned for the school during his eighth grade year to come here for the ninth grade. He was accepted, but he didn't come. I don't remember why. ... I remember being disappointed because he had played a very nice audition. And then he auditioned again during his ninth grade year, and came, and was here for three years. You know, I would have to double check, but I think he made the Texas all-state jazz band also. [The HSPVA website confirms this. --Ed.]

At any rate, what he and I kid about: I think it was his first audition. When the kids come in to audition, especially if they're in the eighth grade, they're absolutely nervous wrecks. And I always start by talking to them, just to get them to calm down. And of course, I ask them the obvious name and whatever. Then I always ask them -- what always seems to settle them down, getting them to talk, is to ask them who their favorite players are on their instrument. So I asked Robert that: "Who's your favorite jazz piano player?" And I don't know if you know him -- he's a very funny guy anyway, and he was even back then; he has a funny way of talking -- Robert Glasper, I think, could be a professional comedian. But at any rate he said, "Oh, Doctor Morgan, I'm so nervous. I just, I just -- I just can't think of anybody." And I said, "Robert, just calm down. At home you've got to have some CDs, some records." He said, "Oh, of course. I've got some, my mother has some." "Well, you know, like who?"

"Oh, Doctor Morgan, I just, I just --" and all of a sudden, he blurts out, "Oscar Peterson!" And I said, "Ooh! Great answer." I write down on his audition sheet, "Oscar Peterson." And I said, "No problem. Let's proceed with the audition." And of course, he passed, and as I already said, he came to the school.

Eric Harland was great. And you know what's interesting about Eric: He only came there for three years. He told me at some point that his mom had called -- he wanted to come his first year; that is, his ninth grade year -- and they had been told that auditions were over that year ... He could have just walked away, and never came back. But fortunately, for us, and I hope for Eric, fortunately, they did call back a year later, and he came and auditioned for the ninth grade, for tenth grade, and had three wonderful years at the school. He went on a major scholarship to NYU, but didn't stay there long, because he got to gigging so much! He may have completed a semester, maybe a year, but I don't even think a full year at NYU because he got so busy playing, and still is, as you know.

... All the kids -- Chris Dave, Eric Harland, Jamire Williams, Kendrick Scott, Herman Matthews on the West Coast -- any of the drummers that are now prominent played in our big band at the school. And they were, without exception, terrific big band drummers. And I think that, sure, that transfers. If you're a drummer, you frequently have to set up the "and" of [beat] one. And there's no better way to learn to set up the "and" of one by playing in a big band, you know. ...

In fact, a quick story that I remember. I think it was [Eric Harland's] senior year that we had the great bassist Milt Hinton on campus, and we were playing Thad Jones' arrangement of "Three and One." And that particular chart has one of the greatest big band out choruses, I swear, ever written. There's one place where the band plays this gorgeous chord, and it's preceded by what's supposed to be a huge drum fill, like three measures long. As we rehearsed the tune, before Milt Hinton came to campus, I could hear Eric obviously really working on that setup. Because every rehearsal, he would try something different, something a little more complicated, until finally, just a few days before the concert, he was playing this break, this setup, that was just absolutely sensational. And so when Milt Hinton got there, and we rehearsed it, and Milt Hinton was playing with that band, we came to that place. I was watching Milt Hinton, because I wanted to see his reaction. He literally, while he was playing, jumped off the floor and turned around and looked at Eric, and grinned, ear-to-ear.

Jason Moran graduated from the school in 1993, and was a very interesting young man, even in high school. From a very unusual family -- I was in their home several times back in those days. Wonderful mom and dad, very supportive -- unfortunately, his mom died of cancer, maybe three years ago. At any rate, what was unusual, in this day and time where everything is so specialized, and the focus of so many lives is so narrow, Jason's family was not like that at all. For example, the entire family: They're big golfers. Even today, it's probably safe to say there's not that many jazz musicians, young or old, who really get into something like that to a serious degree. In Jason's case, starting at a very young age, he studied with a classical piano teacher. Their home is full with wonderful modern art -- sculpture and so on. Just an incredibly well-rounded, stimulating environment for a young person. The family would go hear the symphony all the time. At the same time, Jason's dad, Andy, has this incredible collection of jazz records: Trane, and Miles, and whomever. Jason grew up around all that. So it's not surprising that he's so gifted.

Interestingly, the year [Jason Moran] came [to HSPVA], we happened to have a bunch of good jazz pianists at the school. So he had to wait in line -- it seems amazing now. But for example, his first year there, he didn't even play. The school has two big bands ... I would have no more than two pianists in each big band. And the school had just one official jazz combo that met for credit. And Jason wasn't in any of that, because like I said, we had a bunch of good jazz pianists. ... So the first year, he didn't do any playing at school. He took classes -- he took the jazz fundamentals class, he took theory, whatever. But I can remember walking down the hallway, and just hearing him in the practice room, and just hearing him progress, and working hard, more-or-less on his own. But [the next] year, I put right in the first jazz band, and right in the school combo. And his senior year, he was student director of the school combo. His senior year, he made the Texas high school all-state jazz ensemble ...

It's interesting to me: I've had many opportunities over the years to introduce prominent ex-students in various situations when they come through Houston. In most cases, what I do, and what the people want me to do, is to think up some story from when they were in high school that might even embarrass them. But with Jason ... I can't think of any stories that would embarrass him. He was just an absolute model student in high school. He was always dressed nicely, and again, this gets back to his family influence: The whole family always dressed nicely. You know, very stylish. Anyway, what was the question?