Accessibility links
Quincy Jones Vs. Kanye West, And Why It Matters For Jazz : A Blog Supreme In an interview with Us magazine, the legendary producer seemed to dis the hip-hop star, himself a legendary producer in the making. But a lot went unsaid -- and the climate for jazz has something to do with it.

Quincy Jones Vs. Kanye West, And Why It Matters For Jazz

Quincy Jones Vs. Kanye West, And Why It Matters For Jazz 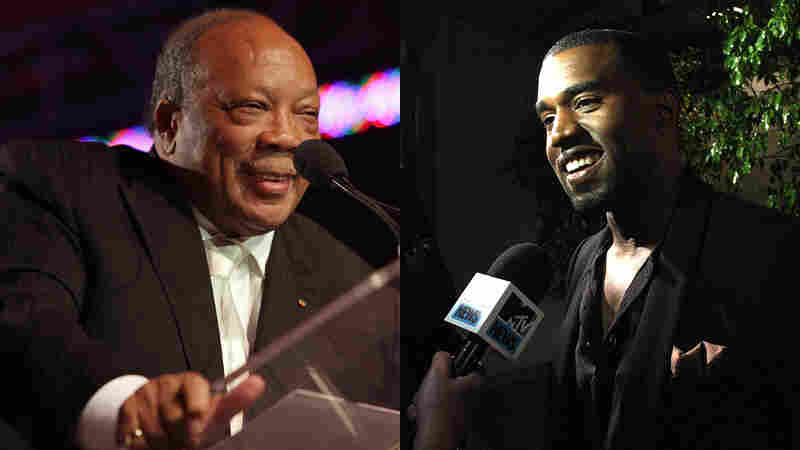 No two men should have all that power. Roger Kisby/ Frederick M. Brown/Getty Images hide caption 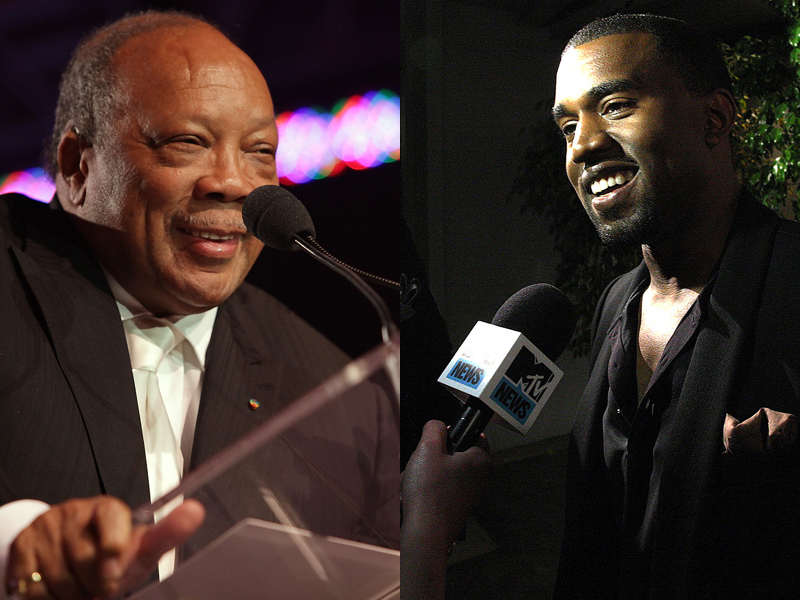 No two men should have all that power.

"He's just a rapper. There's no comparison. I'm not putting him down or making a judgment or anything, but we come from two different sides of the planet."
--Quincy Jones, on Kanye West

Like most people who follow music for a living, I've been listening to the new Kanye West record lately. Much critical hyperbole has been written about a man known best for his own hyperbole, with or without a backing track. Whatever. At its greatest moments, My Beautiful Dark Twisted Fantasy -- its excesses, awkward passages and random unsavory elements aside -- makes me want to run through a brick wall yelling "Hallelujah!" or the equivalent.

But, OMG, did you hear what legendary producer Quincy Jones said about Kanye last week in Us magazine? How Kanye is "a great rapper, but there are a lot of good rappers"? More: "A producer has to have some sort of skills that enable him to be a producer. It's a whole different mindset. No comparison. None." Oof.

To be clear, it doesn't seem like Jones is actually trying to start any beef. He states at his website that he was taken out of context, and that he meant no offense. Why would a man of his stature take any shots, right?

But it also seems clear that Jones thinks that West is not yet his equal. And I have a hunch that his rationale, while perhaps flawed, illuminates something important about the state of jazz today.

Let's hear more context. Us' Ian Drew prompted Jones with this: "Kanye West is similar to you in that he's the producer everybody wants to work with in the last decade...."

How man? No way. Did he write for a symphony orchestra? Does he write for a jazz orchestra? Come on, man. He's just a rapper. There's no comparison. I'm not putting him down or making a judgement or anything, but we come from two different sides of the planet. I spent 28 years learning my first skill. I don't rap. It's not the same thing. A producer has to have some sort of skills that enable him to be a producer. It's totally different to know what to do with 16 woodwinds you know from piccolos down to bass clarinet. It's a whole different mindset. No comparison. None.

I'd appreciate it if people didn't take my comments about Kanye West ( @KanyeWest ) or anyone else for that matter out of context to contrive a story. I have nothing but respect for my little brother Kanye and what he has achieved in his young career and I look forward to watching his evolution as an artist. There is a reason why we put him on the new We Are The World 25 for Haiti -- he's a great rapper. But having been in the music business for more than 60 years and having been fortunate to accomplish what I have over that time, it’s not unreasonable to put a comparison of Kanye at this time in his career and myself into the proper perspective. This is not dissing Kanye, this is simply trying to express that I'm not a rapper! I don't need to take anyone else's props away from them. Let's all just try and keep the record straight.

I still read a little derision there, a little "you done good -- for your age" lecturing. And Jones certainly doesn't seem to appreciate that making incredible, rejuvenating beats is a highly skill-intensive craft -- if he even knows that Kanye West makes beats, too. "I don't think about him much," Jones also says in the Us interview, seemingly as a statement of fact.

But let's be generous here and assume that Jones has some real, ineluctable respect for Kanye West as a creative human being. What else could we make of the comment that they're "from two different sides of the planet"?

Perhaps it has to do with "from piccolos down to bass clarinet," and "28 years" spent learning the trumpet and arranging? Well before "Q" was making hits with Michael Jackson, or film scores, or even before he was writing backing charts for Frank Sinatra, he was a jazz trumpeter. And then he studied at what became Berklee College of Music, and started to write and arrange jazz charts, and conducted Dizzy Gillespie's orchestra, and led his own band ...

It seems as if, in some way, Jones believes that coming up in the jazz community and coming up in the rap world are fundamentally different pursuits. Jones probably spent decades learning the Western major-minor system of music, not to mention its flawless execution on a wind instrument, both in private and on the proving grounds of ballroom stages, all to be able to improvise a medium-tempo minute-long solo, say, thrice a night, night after night. He doesn't seem to understand the equivalent level of commitment in the hip-hop world -- or maybe he doesn't believe it exists?

Whatever the answer to that, pop music was more musically complex when Jones was coming up in it. It cycled through more harmonic information, depended more on people who knew how to arrange for live musicians, depended on those live musicians themselves. (Pop music today is more complex in some ways, of course, but not on the standards of performing in the Western major-minor tradition.) The skills of musicians -- playing an instrument, reading music, and so on -- were taught even in American inner-city schools. Today, this infrastructure and this wide literacy in music don't exist to nearly the same degree.

A correlation: There are fewer jobs for young trumpeters anywhere. Another: You don't even have to learn to sing on pitch to make hits, as Kanye West's past work has proved. There are myriad new ways to make songs, and they don't necessarily depend on the things that jazz students learn in school.

This isn't to say that "pop music sucks today," or that "rappers aren't skilled musicians." I listen to the Kanye Wests of the world, and I hear musicians' ears and finely honed sensibilities at play. (My favorite example: "Gone," off Late Registration.) It's just that the process of making a hip-hop chart-topper -- and, increasingly, a pop or rock chart-topper -- is often different than the hitmaking process from when Quincy Jones was a young trumpeter.

When we inevitably wonder, "Whither jazz in 2010?" perhaps we might look at the climate for making any music today. The "side of the planet" that allowed jazz to commercially flourish once upon a time went a lot deeper than the vague idea of more popularity. There was a big ecosystem for live performance, and you could hear it in the popular music of its day.

Even after all that, I'm still not convinced that Quincy Jones truly does occupy a different planetary orbit than his "little brother." But there's something to his line of reasoning.

UPDATE: After reading through some of the many (!) comments that have come in, it looks like I've sparked the age-old "is rap art?" debate. My bad. All I have to say on that matter is that I don't particularly care about it. I like one thing; I also like the other thing. In fact, it seems like Quincy likes rap too! The only thing we can really say definitively about him is that he doesn't understand what it takes to be a rapper -- and that doesn't necessarily have a value judgment attached to it. I don't mean to manufacture controversy about artistic validity of an entire genre.

Another thought: The point isn't to portray Quincy Jones as a doddering old man. If this were a comparison of unfounded egotism, Kanye would take more than a few in the chin. I've singled Quincy out here mostly to illustrate that there's something important embedded within his generation's perspective.

In Quincy's early heyday, pop skills were also jazz skills. Today, that's somewhat less so. Not to say that there aren't lots of jazz musicians who love and work with hip-hop/rock/etc., and find lots of commonalities. But in the big picture, the gulf between the pop world and the jazz world isn't as narrow as it once was -- and this whole hubbub makes that clear.