Accessibility links
From Cuba, With Jazz : A Blog Supreme Chico O'Farrill, the late legendary composer and arranger, wasn't able to return to Cuba after 1959. But that's only part of why his son Arturo O'Farrill brought his own jazz orchestra on a trip to the island nation.

From Cuba, With Jazz

From Cuba, With Jazz 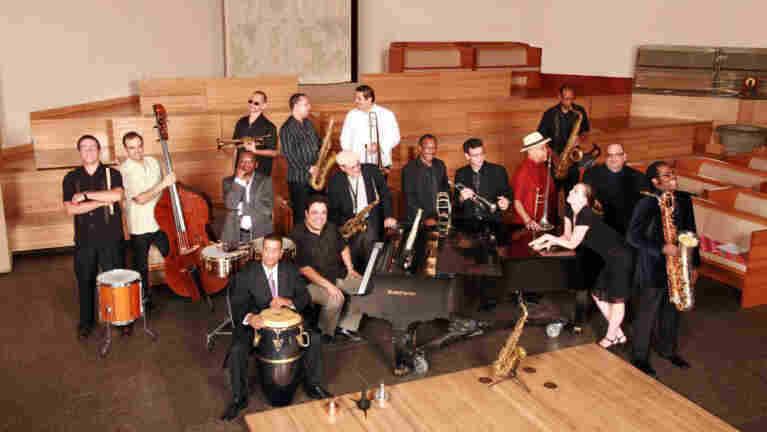 The Afro-Latin Jazz Orchestra. Courtesy of the artist hide caption 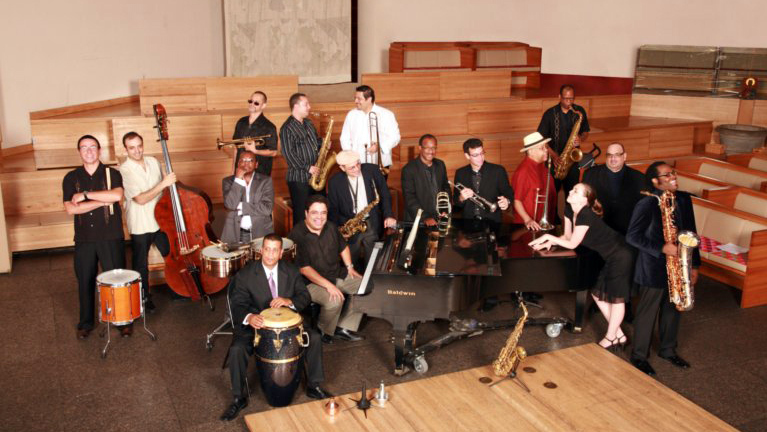 You can't tell the story of jazz without acknowledging the deep influence of Cuban music. And U.S.-Cuban politics of the last 50 years have made that sort of cultural exchange much less frequent than it could have been. That's only part of why it's so interesting to read that two major U.S. jazz bands made rare trips to Cuba last year.

Journalist Larry Blumenfeld traveled with both the Jazz at Lincoln Center Orchestra (directed by Wynton Marsalis) and the Afro-Latin Jazz Orchestra (directed by Arturo O'Farrill, and once-upon-a time resident at Jazz at Lincoln Center) on separate trips to the Caribbean. He filed a few different dispatches for the Wall Street Journal while on site with the JLCO. And now he's written a Village Voice cover story about the ALJO's (separate) trip.

You may remember that A Blog Supreme reported that this was "The Musical Return To Cuba His Father Couldn't Make." Arturo O'Farrill's father Chico O'Farrill, the late legendary composer and arranger, was never able to return to Cuba after 1959, the year Fidel Castro took power. But for Arturo ...

... this isn't just a personal matter, he explains. "I'm not interested in making light of the fact that Cuban politics is rife with corruption and political imprisonment. I'm also not delicate about communicating that America is a nation built on tremendous bloodshed and continuous imperialism. I don't think those are things that should be run from or ignored. They're just historical facts. Anybody who's half-awake in the world will understand the brutality of both sides. Music courses through and above all that. We need to connect, not disconnect."

It's a great read, and not only for the details from the ground. Blumenfeld's piece is rife with more great quotations from O'Farrill:

Arturo is still sorting out his feelings. "I've been thinking long and hard about this," he says. "The reason I went was not to canonize my father. I did want to hear his music in Cuba and to see my mother there. But there's another thing: I want jazz to stop dying this awful death, this strangulation. I think the future of this music has to do with the acceptance of a larger picture of it, which has always been the deeper truth anyway.

"I think it would be arrogant to call myself Cuban. I didn't grow up in Cuba. I was born in Mexico, but I'm not Mexican. Raised in New York, yet I'm not exactly American. My father never quite found his home, either. He was a little pink Irish-German-Cuban guy without any directly Hispanic features who nevertheless was thrown in the Latin heap. He loved New York, but he wept for Cuba. He loved jazz, and he wrote incredible Afro-Cuban music. There's got to be a way to define those of us who don't really have a home, those of us who don't have but who insist on having an entry point into the conversation — which is most of us, really."

It's hard to tell what sort of "larger picture" O'Farrill is hinting at specifically. But the experience of those of us with hybridized ethnic/racial/whatever identities finding ourselves in jazz music: There's clearly something there, no? [Village Voice: NYC Pianist Arturo O'Farrill Finds Himself In Cuba, and Brings His Father Home]