Accessibility links
Yup, Jazz Musicians Still Love To Play Radiohead Songs : A Blog Supreme For well over a decade, improvising musicians have found a lot to like in a group with the musicality of Western art music and the palette of rock. Hear recent and classic takes on jazz's favorite band by pianists Brad Mehldau and Yaron Herman. 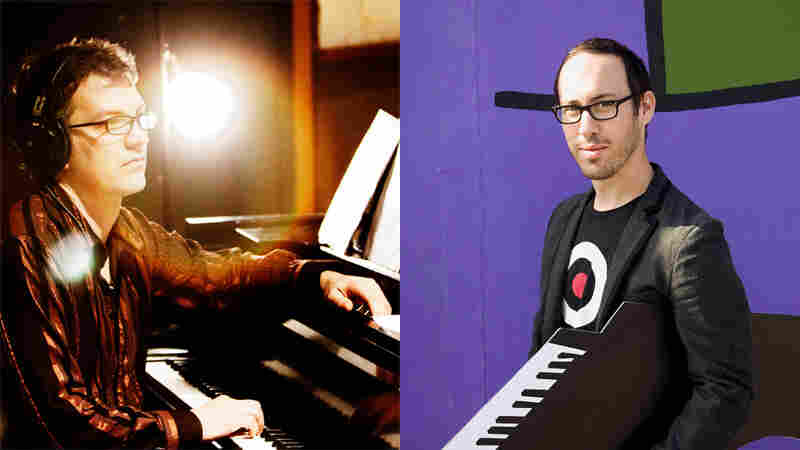 Here are two Radiohead covers by jazz musicians, both on albums released within the last two weeks. Brad Mehldau's is a solo piano version of "Exit Music (For A Film)," live at a jazz festival in France. Yaron Herman, the pianist based in France, waxed "No Surprises" with the American rhythm section of Chris Tordini (bass) and Tommy Crane (drums).

I'm on the topic, of course, because Radiohead has its own new album, The King Of Limbs. Jazz musicians have been playing Radiohead tunes for well over a decade now. I've yet to notice any jazz covers from this new one1, but the previous record In Rainbows (late 2007) has already summoned a slew of jazz arrangements, as any YouTube search will show. In fact, in 2008 The Guardian got five — yes, five — Europe-based jazz bands to essay their takes on "Nude."

In an odd coincidence, Mehldau put his 2-CD + DVD release Live In Marciac out on Tuesday, featuring "Exit Music (For A Film)." That's a solo performance. For my money, the best jazz take on Radiohead still belongs to Mehldau's trio arrangement of "Exit Music," with Larry Grenadier on bass and Jorge Rossy on drums2. Here's a taste, from a 2001 performance:

Around 2:07 in this clip, when the band starts really cooking, Mehldau plays a certain right hand melody ("You can laugh" ...) not heard elsewhere in the piece. It's only 16 bars, but it perfectly launches the solo section, which turns intense pretty quickly. The energy of the band seems to shift, like a drug has just kicked in, or a pot has just started to boil.

There's a lot to like here: Jorge Rossy's ride cymbal, the distinctly "Brad-like" two-hand virtuosity, the ensemble communication. I also agree with Joe Tangari when he writes that this arrangement is a great illustration of how the art of jazz is often one of interpretation, or even re-invention. It's great source material to start with, a moody grower which sounds a bit like Chopin because, well, it's based on Chopin's "Prelude in E minor."

I'm not sure if Brad was the absolute first jazzman to have a go at Radiohead, but he was certainly the most influential. This came out when Mehldau was one of the few Jazz Musicians Who Everybody Talks About; it, plus subsequent covers ("Knives Out," "Paranoid Android," etc.), surely helped to turn a lot of fellow musicians on to this band. (More thoughts on this, from JazzTimes.) For a while in the mid-2000s, it seemed like everybody in jazz was recording their own "Everything In Its Right Place" or something. Oddly enough, Yorke/Greenwood/Selway et al. might just be the most-played jazz composers to have emerged in the last 20 years — even though they're not really jazz composers.

There's also a greater narrative in here, one which proved appealing to the generation of jazz musicians weaned on the pop, rock and rap of the '80s and '90s. Mehldau's version — its artistry, but also its relative success and visibility — defined a model to embrace the musical zeitgeist, and even be overtly influenced by it. (Especially when that zeitgeist is as musically rich as Radiohead.) You play what you know, right? And suddenly, musicians were taking this to heart.

Which brings us to Yaron Herman's new album, Follow The White Rabbit. The pianist is not yet 30, and like many his age, I think it's safe to say he's listened to some Mehldau in his day. Like Mehldau, he's often after a streamlined, sleek trio sound which isn't afraid to incorporate rock's beats or tunes; in addition to "No Surprises," there's also a version of Nirvana's "Heart-Shaped Box" on the new record. (This from a pianist known to cover Britney Spears' "Toxic.")

The album has plenty of nice moments worth greater consideration on their own terms, sure. But I can't help feeling that the door to some of those moments was opened by a rock band with serious musicality — it likes and listens to jazz, for one — and previous jazz musicians who recognized that.

As for Mehldau's new work, if you're a big fan, you'll likely like this solo set too. I personally prefer his work with his trios. But if you listen to this "Exit Music," you'll hear that this version is a fairly deep revision of his playing on the trio version. That willingness and ability to re-imagine a staple of his repertoire is ... it's good to hear.

1. To my ears, The King Of Limbs is Radiohead's weakest record since its debut in 1993. I'll admit, I've only given it three full listens so far, so this could change. But unlike nearly every other record this band has put out, at this stage, I'm not particularly itching for more. Same attention to sonic detail — so much dubstep! — but there's a few too many woozy two-chord songs and not enough harmonic development for my taste. Meh.

2. There are at least two versions of this on disc. It came out on a Mehldau studio record in 1998 (Songs: The Art of the Trio Vol. 3), and then on a live date in 1999 (Art of the Trio, Vol. 4: Back At The Vanguard). The live version is where's it's at, IMHO. Radiohead's original version, of course, came out on the 1997 release OK Computer, and literally appeared in a film the year before, in the credits of Baz Luhrmann's Romeo + Juliet.