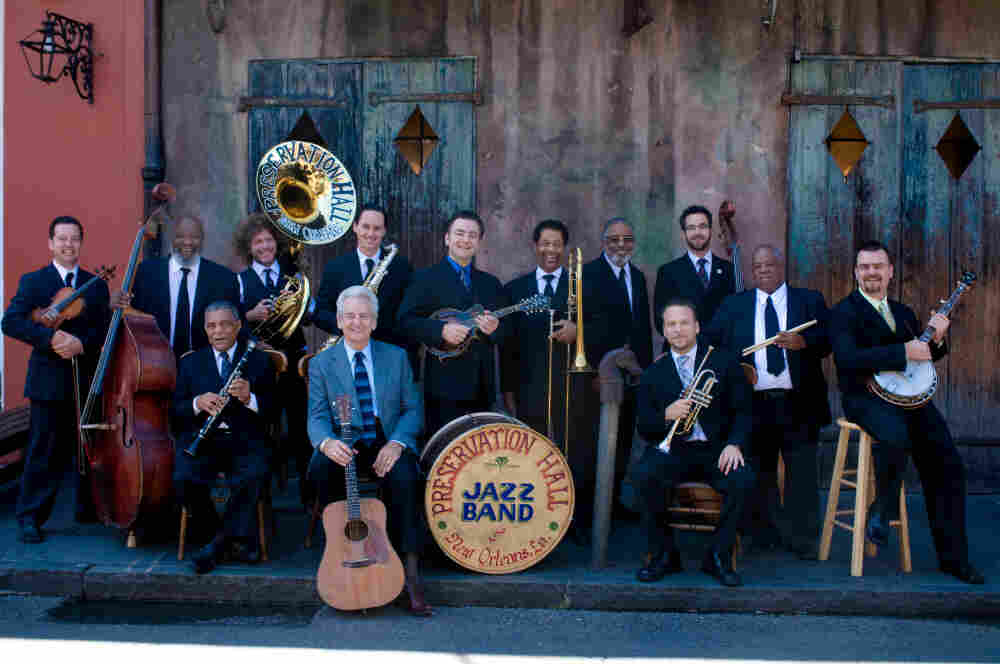 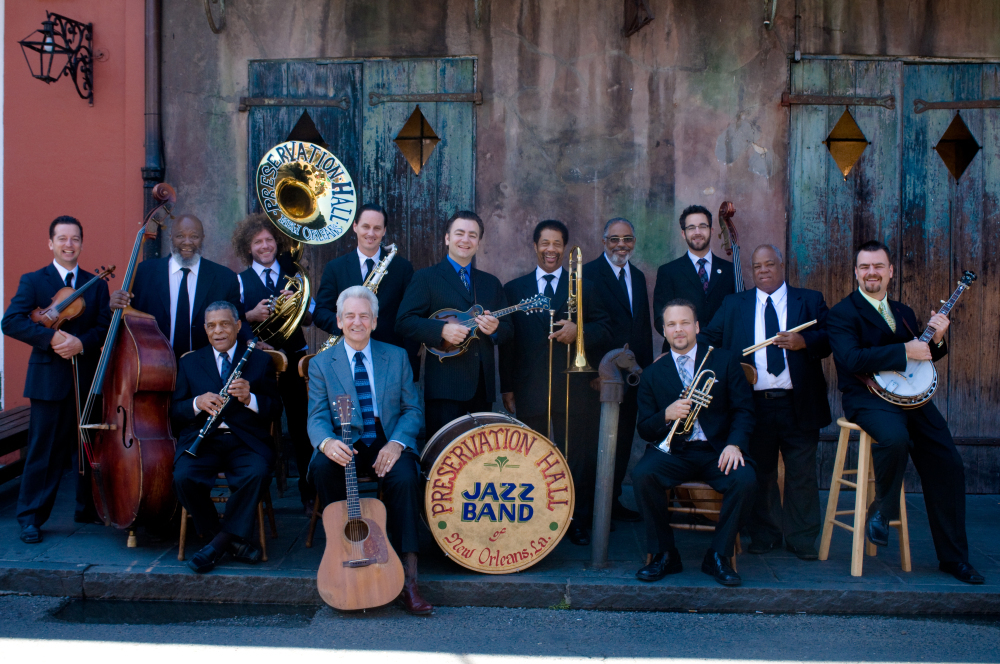 The Del McCoury Band and the Preservation Hall Jazz Band.

If you're looking for credibility in either bluegrass or jazz, you'd be hard-pressed to top either the Del McCoury Band or the Preservation Hall Jazz Band. McCoury once joined the band of Bill Monroe, generally acknowledged as bluegrass' founder; he now leads his own acclaimed band. Around the time that McCoury met Monroe, Preservation Hall was founded to "nurture and perpetuate the art form of New Orleans Jazz." Many of the PHJB's charter members played with the early 20th-century pioneers of jazz, and that line of mentorship continues into today.

The Del McCoury Band and the PHJB have recorded a new album together: American Legacies is due out April 12. Bluegrass and jazz may seem odd bedfellows at first, but it's not the first time McCoury and Preservation Hall have collaborated — and there's a lot of history where that comes from. Listening to "One More 'Fore I Die," the last track on the album, it's hard to tell where the bluegrass ends and the jazz begins. We're happy to present an exclusive premiere of the song, as a free stream or download.

So why does this hybrid of American traditions work so well? We asked NPR newscaster Paul Brown, who's also an award-winning bluegrass and old-time string music documentarian, researcher and musician. He kindly sent us this thought. --Ed.

This song works so well for one simple reason: Bluegrass, at its heart, is white rural jazz. It's old-time country or "hillbilly" music with a jazz structure and jazz motifs.

This may not be obvious at the first casual listen, but folklorists and documenters have pointed it out many times. Bluegrass utilizes the jazz formula of establishing melodies, infusing them with blues motifs including blues scales with flatted notes, and –- most distinctively –- giving instruments and singers prominent breaks. Older styles of white country music don't feature breaks nearly so prominently, but jazz-inspired solos are an integral part of the bluegrass sound.

Bill Monroe, who had heard jazz as he developed his new band sound with the Blue Grass Boys, knew exactly what he was trying to achieve with traditional rural music. He pushed his musicians hard to realize a jazzy new take on the songs and tunes he'd learned as a kid. And he composed his own tunes and songs to fit his vision. (Bluegrass music wasn't even called by that name until the mid-1950s, well after Monroe had established the genre.)

If bluegrass and jazz have so much in common, what distinguishes them? One thing is the banjo style. The four-string banjo, derived from African instruments, is certainly a familiar sight and sound in early jazz bands. But an element that defines bluegrass specifically is the use of the three-finger five-string banjo style brought to a new level by Earl Scruggs.

Scruggs played with Monroe in the late 1940s before joining up with Lester Flatt to form the Foggy Mountain Boys. The renowned fiddler and banjo player John Hartford once told me that without the Scruggs-style banjo, there would be no bluegrass: The bluegrass bands would simply have been fairly nondescript country jazz bands. And if you listen to early Monroe recordings before Scruggs arrived, the Blue Grass Boys sounded much more like a country, jazz and blues band than what we would now think of as a bluegrass band. It's the banjo style combined with the jazz structure that really creates the bluegrass sound.

So bluegrass, with the 3-finger-style banjo, has its own sound, a mix of white and black musical streams coming out of the mountains and hollows of the Appalachians and the cities. But with this performance, we hear how much the two styles have in common, and we hear Del McCoury bringing bluegrass back to its jazz roots.

In "One More 'Fore I Die," we can also hear remnants of church-song harmonies and phrasing common to jazz and bluegrass. There's a good reason for this: Countless jazz and bluegrass performers started learning music while singing in churches, whether urban or rural. It often doesn't take much to bring bluegrass and jazz singing together.