Accessibility links
Are Cajun String Bands The Next Big Thing? : A Blog Supreme If the success of Mumford and Sons and The Avett Brothers means anything, a new wave of young string bands has now achieved genuine stardom. Might those same young music fans embrace the new crop of Cajun bands that have emerged around Lafayette, La.? 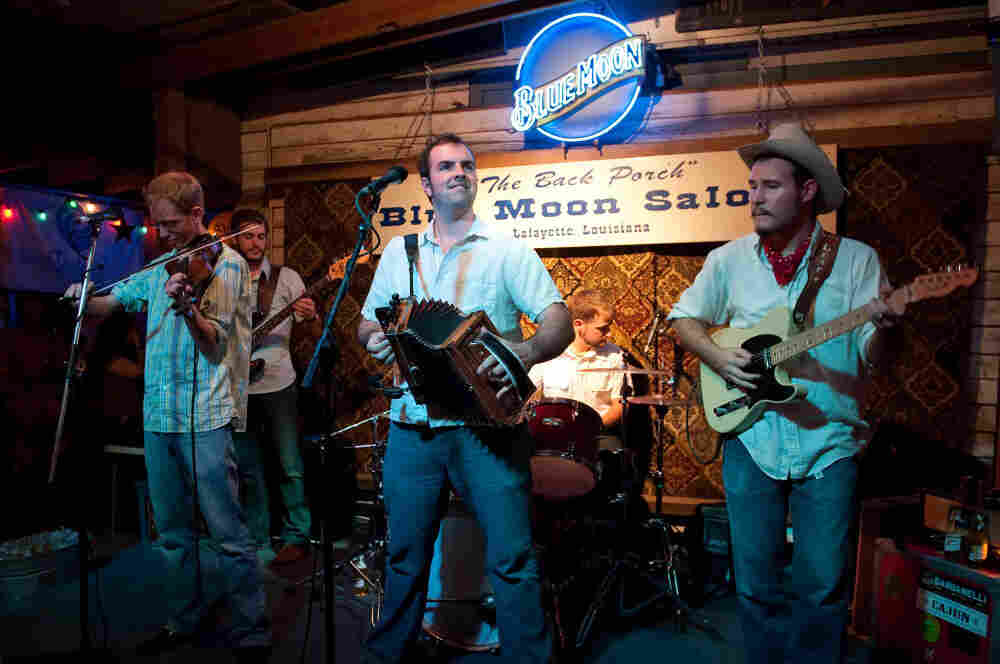 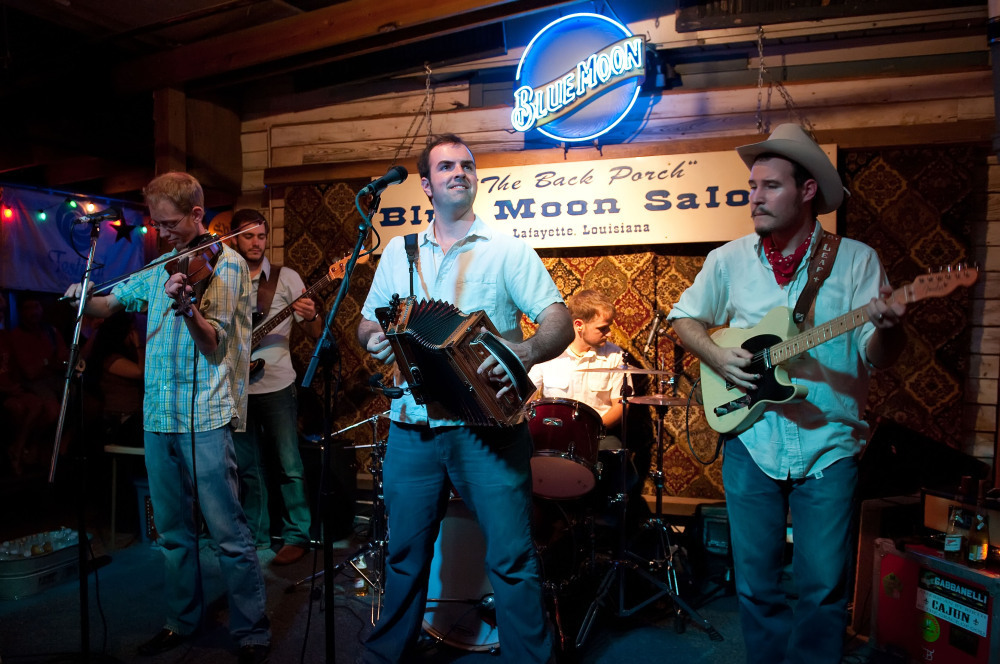 David Simpson/Courtesy of the artist

The first day of this year's New Orleans Jazz & Heritage Festival culminated in back-to-back sets by West London's Mumford & Sons and North Carolina's The Avett Brothers before a crowd more than 20,000 strong. Here was conclusive proof, as if it were needed, that a new wave of young string bands has broken out of the underground into genuine stardom. These two bands, which performed together with Bob Dylan on this year's Grammy Awards telecast, have shown that young people can respond in large numbers to the combination of fiddles, acoustic guitars and doghouse bass played with the same energy as punk rock.

If those kids will embrace Mumford & Sons and The Avett Brothers — as well as related bands like Old Crow Medicine Show, Uncle Earl, The Wailin' Jennys and Carolina Chocolate Drops — might they also embrace the new wave of Cajun bands that have emerged around Lafayette, La.? After all, bands such as the Pine Leaf Boys, Cedric Watson & Bijou Creole, the Lost Bayou Ramblers, Feufollet and the Red Stick Ramblers play their string-band instruments with the same contagious momentum as their better-known counterparts.

On Saturday afternoon, for example, you could see the Pine Leaf Boys whip the crowd — smaller than the Avetts', but equal in enthusiasm — into a frenzy with thumping two-step dance tunes. Wilson Savoy stood center stage with his legs dramatically spread apart like Billy Zoom from the punk band X, but instead of an electric guitar, Savoy held a handmade button accordion, its bellows stretching and collapsing with the propulsive beat. Backed by skinny Courtney Granger on fiddle and cowboy-hatted Jon Bertrand on acoustic guitar, Savoy had the young crowd spinning dance partners in the dusty grass.

This Jazz Fest appearance was just an example of what happens at Lafayette's Blue Moon Saloon every weekend. On the tavern's half-covered back porch, young Cajun bands play for crowds dominated by twentysomethings going out to drink and dance on a Saturday night — not Baby Boomers looking for exotic culture and aerobic exercise.

As a result, Cajun music has shaken off its museum dust and returned to its origins as social music. It's become more muscular to keep its young audience on the dance floor, and has embraced new songwriting and modern influences to keep those kids coming back. It's a culture that's no longer just preserving its past, but also redefining its present.

Can the enthusiasm in Lafayette spread to the rest of the country and infect the much larger string-band audience? Wilson Savoy recognizes the obstacles. Backstage at Jazz Fest's Fais Do-Do Stage, the tall, bearded bandleader in the white shirt and white slacks cited two challenges: French lyrics and the button accordion. Young people in Lafayette are used to hearing Cajun French; many of them even make a point of speaking it the way kids in other cities use rap slang — as a way to separate themselves from mainstream culture. But kids in other cities can find it a barrier.

"And with an accordion, you can't bend or slide notes the way you can with a fiddle or guitar," Savoy says. "So it doesn't swing the way those bluegrass-influenced instruments do. On the other hand, the rhythm in Cajun music is driven by the in-and-out of the button accordion, that 'chanky-chank' sound. It's almost a percussion instrument. That's why Cajun music doesn't work on a piano accordion, which doesn't have that in-and-out.

"If you kick off a song with fiddle, the dancers hang back to see what's going to happen," he says. "But once the accordion jumps in, the dancers are right there. And that's as true in Austin or North Carolina as it is in Lafayette. When we play in places like that, we find an audience that's attuned to any music that comes out of a distinctive culture. Even if they didn't grow up in that culture, they can tell if the music is real or fake."

Wilson's older brother Joel, co-founder of the Red Stick Ramblers and head of Valcour Records, agrees: "Because it's a social music, the language barrier is not as big an obstacle as you might think," he says. "These shows aren't for sitting back and analyzing the music. It's a social situation where people are drinking and dancing and talking to their friends. In that situation, the heartache and joy of the songs come through even if the lyrics are in a different language and the instruments are unfamiliar."

The two Savoy brothers — children of the famous Cajun duo Marc and Ann Savoy — point out that most young Cajun musicians grew up in garage-rock and punk-rock bands, just as the members of The Avett Brothers and Old Crow Medicine Show did. Like their Carolina counterparts, the Louisiana youngsters discovered that acoustic instruments were cheaper, more portable and more adaptable.

"These guys from punk bands who pick up an acoustic instrument and learn a few chords soon discover that they can sit in a jam session for hours at a time and have the time of their lives," Joel Savoy says.

Those jam sessions often provide the common ground for Cajun musicians and old-time string-band musicians to collaborate. Five years ago, at the Festival of American Fiddle Tunes in Port Townsend, Wash., Joel Savoy met the members of the Foghorn Stringband, an Oregon old-time string band. Through the shared vehicle of the fiddle, Savoy and the Foghorners found that French-inflected Cajun music and Celtic-inflected old-time music weren't so different. (After all, old-time mountain music led to commercial country music, and country music fused with Cajun music in the '40s to create groups like the Hackberry Ramblers.)

When the septet billed as Jesse Lége, Joel Savoy and the Country Cajun Revival played Jazz Fest Sunday morning, it proved just how well Cajun music and old-time string-band music can mesh. Whether remaking country standards by Dolly Parton, Loretta Lynn and Porter Wagoner with a dash of South Louisiana squeezebox, or lending a hillbilly twang to French-Louisiana standbys such as "I Want To Get Married but the Hens Aren't Laying," Joel Savoy and Stephen "Sammy" Lind played twin fiddles. Meanwhile, Foghorn's tall, thin lead singer Caleb Klauder warbled in a handsome tenor, or the gray-haired Lege sang in a piercing shout.

In "Corrine, Corrina," the old blues that still flourishes in both traditions, Klauder played the Cajun triangle and sang the English lyrics, while Lége played the accordion and sang the French lyrics. No one stopped dancing when the language changed.

"It's all working-class social music — waltzes, two-steps and slow shuffles," Joel Savoy says. "There's no reason we can't share the same audience. We're on a mission to make the Cajun audience younger, and to do that, we have to be open to new influences. Cajun music has always incorporated outside influences, whether it was Bob Wills swing in the '40s or Fats Domino rock 'n' roll in the '50s. To stay true to that tradition, Cajun music has to keep changing." 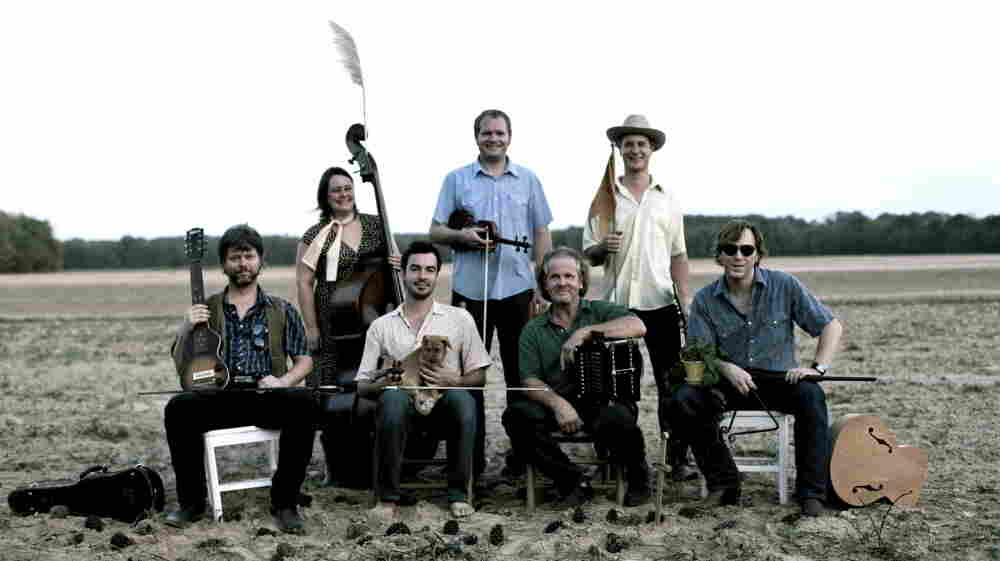 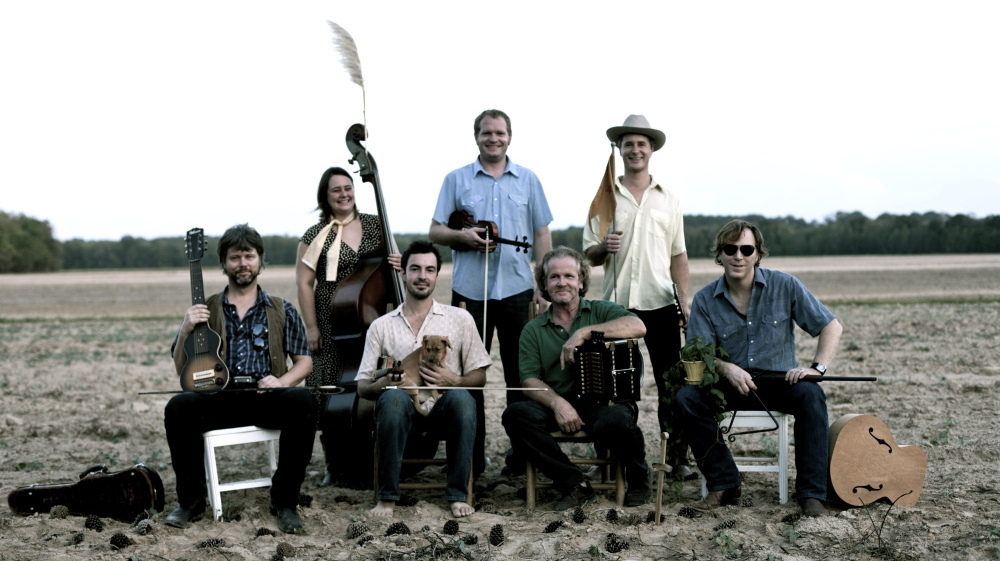