Accessibility links
Threadhead Records: A Label Founded By Fans : A Blog Supreme They started as fans — unusually proactive fans from all over the world who met online through their shared love for New Orleans music. They wound up starting an unusual record label serving many of the city's best musicians. 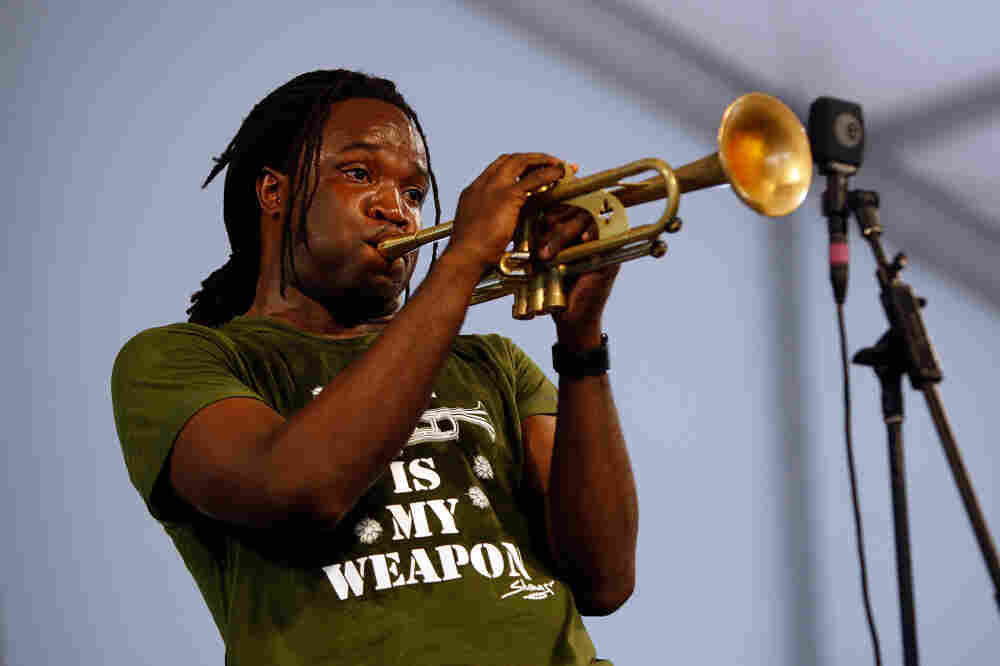 Trumpeter Shamarr Allen, who has recorded both as a leader and sideman for Threadhead Records-funded projects, plays at the 2009 New Orleans Jazz & Heritage Festival. Chris Graythen/Getty Images hide caption 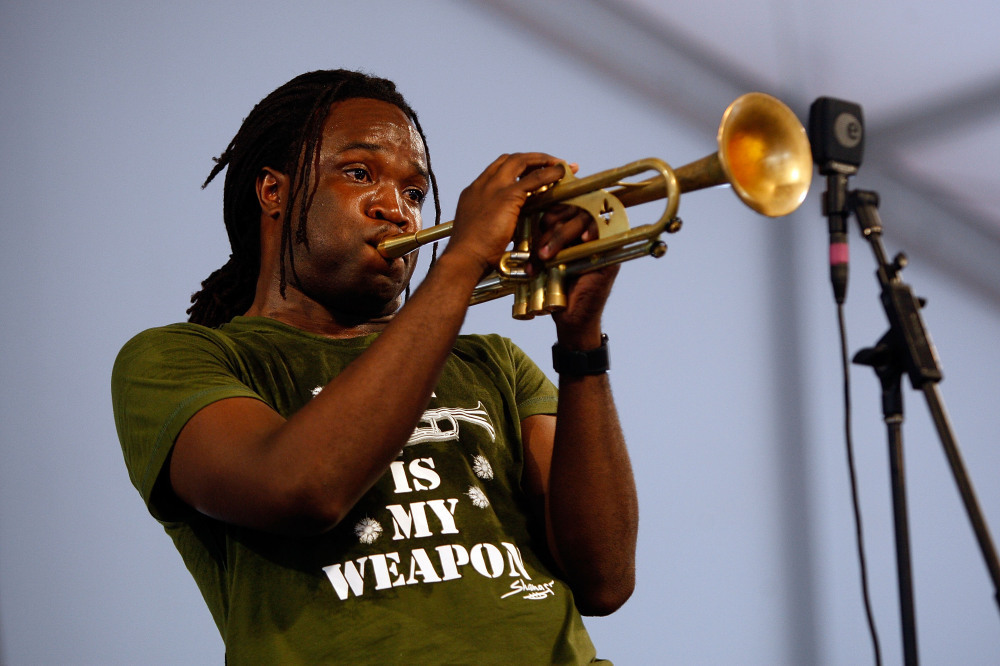 Trumpeter Shamarr Allen, who has recorded both as a leader and sideman for Threadhead Records-funded projects, plays at the 2009 New Orleans Jazz & Heritage Festival.

The Botanical Gardens in New Orleans City Park is a small jewel hidden behind a black iron fence. Statues of flutists and fauns stand beneath dripping Spanish moss, and walkways are lined with flowers in bloom.

On April 28, the doors to the Gardens were thrown open for Threadhead Thursday, a free concert on the night before this year's New Orleans Jazz and Heritage Festival. The show featured some of Threadhead Records' top acts: Paul Sanchez, Shamarr Allen, the New Orleans Nightcrawlers, Ensemble Fatien and Alex McMurray. The event marked the arrival of the four-year-old company as one of the top record labels for New Orleans music today.

That arrival is all the more remarkable for being driven by a non-profit group of volunteers. They started as fans, basically — fans from all over the world who shared a love for New Orleans music and who met in the message boards on www.nojazzfest.com. As they sustained long online comment threads, they began to call themselves Threadheads, and made arrangements to meet in person at New Orleans' annual Jazz Fest.

But these were unusually proactive fans.

They weren't content to accept the shows that local promoters put together; they wanted to put on their own concerts. So in 2005, they hired the bands they wanted to hear and ordered the food they wanted to eat for the first annual Threadheads Party. After Katrina, the private party morphed into a fundraiser for the New Orleans Musicians' Clinic.

Having solved the problem of getting the shows they wanted to see, the Threadheads turned their attention to making the records they wanted to buy. At the 2007 party, after a knock-out set by Sanchez, a singer-songwriter, and jazz vocalist John Boutte, Threadhead Chris Joseph asked when the duo was going to release these songs on an album.

"It was an innocent question," Joseph said, chuckling at his own naiveté then about the record business. "Paul said, 'We would if we had the money.' This light bulb went off in my head, and I said, 'How much would it take?' I expected him to say $100,000, but when he said $10,000, I told him, 'I could raise that.' I knew all the Threadheads had been touched by the show, and I figured if they had enough money to go to Jazz Fest, which is not a cheap vacation, they would kick in some money for this."

The company's model is different, though, from Kickstarter and other fan-funding vehicles that have become popular in recent years. Threadhead does not give grants; it makes loans. It expects the artists to pay back the advance money plus 10 percent (the interest is then donated to charity). So far, every artist has paid back the investment, so there's always a pool of money to begin the next project.

"I can't emphasize enough how important that is," said tuba player Matt Perrine of the New Orleans Nightcrawlers. "Most of the time, the only thing an artist is lacking to make a record is the capital. When I made my first solo album, I had to take the money out of my family's account, and when it came time to make my second solo album, that money wasn't there. When Threadheads stepped up, I was able to go ahead with the project without worrying about the money; I could just focus on the music. So that's one more record of original New Orleans music that wouldn't have existed without the Threadheads. That's huge.

"And to be selected by the Threadheads is an honor for two reasons: It means you're someone whose music they want to hear, and you're someone that they trust to pay back the loan. I'm proud to live in a city of musicians who have paid back every Threadhead loan."

At the Botanic Gardens, the round-faced, dark-shirted Perrine was wrapped up inside his silver sousaphone as the Nightcrawlers blasted out trombonist Craig Klein's "Shake Your Rugalator." The two trombonists, three saxophonists, two drummers, one trumpeter and one sousaphone played surprisingly melodic, surprisingly independent lines that somehow meshed around the syncopated pulse. The stage itself was shadowed by overhanging live oak branches and flanked by palmetto fans; the proscenium was garden latticework painted green. Out on the oval lawn, beneath the incongruous street lamps, much of the audience was out of its folding chairs and rotating its hips.

The evening's penultimate set was Paul Sanchez and the Rolling Road Show. Sanchez, who hatched the Threadhead Records idea with Joseph, was now showcasing the organization's most ambitious project by far: Nine Lives, a two-CD rock opera released this year.

The musical is based on journalist Dan Baum's best-selling book of the same name, which tells the story of New Orleans during the 40 years between 1965's Hurricane Betsy and 2005's Hurricane Katrina through the lives of nine New Orleanians. They range from a transsexual bar owner and a Treme-based Mardi Gras Indian chief to an uptown high-society Mardi Gras king and a violent cop. Sanchez and his songwriting partner Colman DeKay turned these stories into a cycle of songs in hopes that they might become a Broadway show.

"Colman tried to get me to read Nine Lives for months, but I refused because I thought it was another Katrina book and [I] was tired of all that," Sanchez said. "But it wasn't that kind of book at all, and as I started reading it, I got an idea for a song, 'Feel Like a Lady,' about the time the 'John' bar owner becomes 'JoAnn.' Colman and I finished the song, and he said, 'It's too bad it's so late; we should demo this song before I leave tomorrow.' I said, 'This is New Orleans; musicians never sleep.' I called up Shamarr Allen and Matt Perrine and we recorded it at Shamarr's home studio that night." 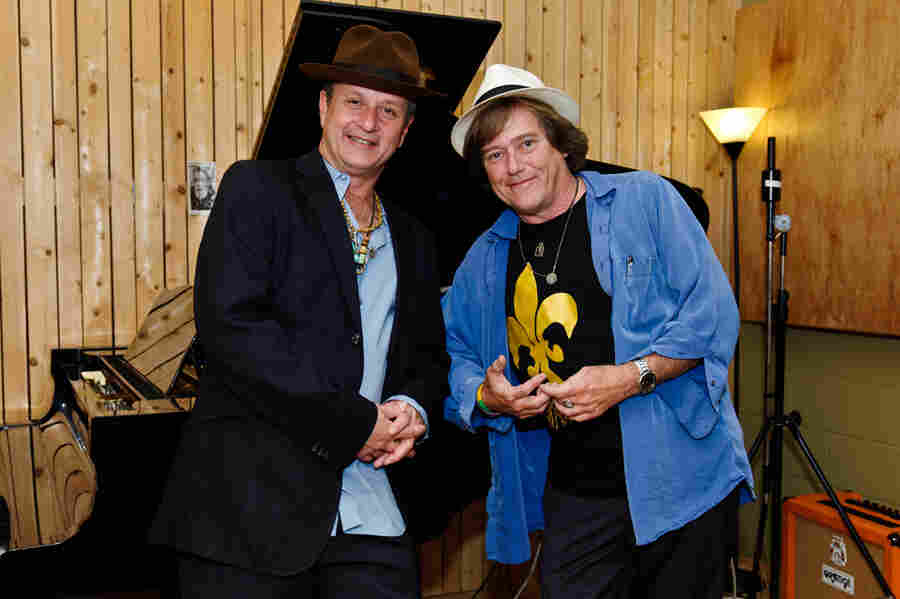 Nonetheless, to record dozens of songs representing nine different characters in a proper studio would be far more costly and complicated than anything Threadhead Records had attempted. This wasn't bringing a sextet into the studio to document its regular live set; this was multiple lead singers, multiple soloists and multiple rhythm sections.

Joseph had the idea to apply for a $50,000 Pepsi Refresh Project grant, and by rallying the label's supporters to vote for the proposal, Threadhead Records won. The label then raised additional money to meet an $80,000 budget. Sanchez decided to invite every New Orleans musician he admired to participate, and the record features Allen Toussaint, the Dixie Cups, Harry Shearer, Irma Thomas, Anders Osborne, Michelle Shocked and much of the Threadhead family.

"There are eight different Bouttes on this record," Sanchez said. "This project is about community, and that's important because that's what I lost in Katrina. I also lost a lot of stuff, but it's easy to get more stuff. But I didn't get that community back until I got involved with the Threadheads.

"For Nine Lives, I tried to reach beyond musical boundaries, to get people from different scenes who don't usually play together into the same studio at the same time. That's what New Orleans is all about: mansions bumping up against dilapidated houses, a community without the usual boundaries. When I lived in New York, I'd meet people and they'd always ask, 'What do you do for a living?' Here they always ask, 'Where are you going to eat tonight?'"

"We help the musicians give birth to their records, but they get pregnant on their own," Chris Joseph said. "The thing I've learned is that the music business can be a lot of fun if you're not worried about making money. If you love the music and like being around wonderful people, that's reward enough. I think this is a model that could work in other cities and other genres, wherever there's a true music community. It's not rocket science."