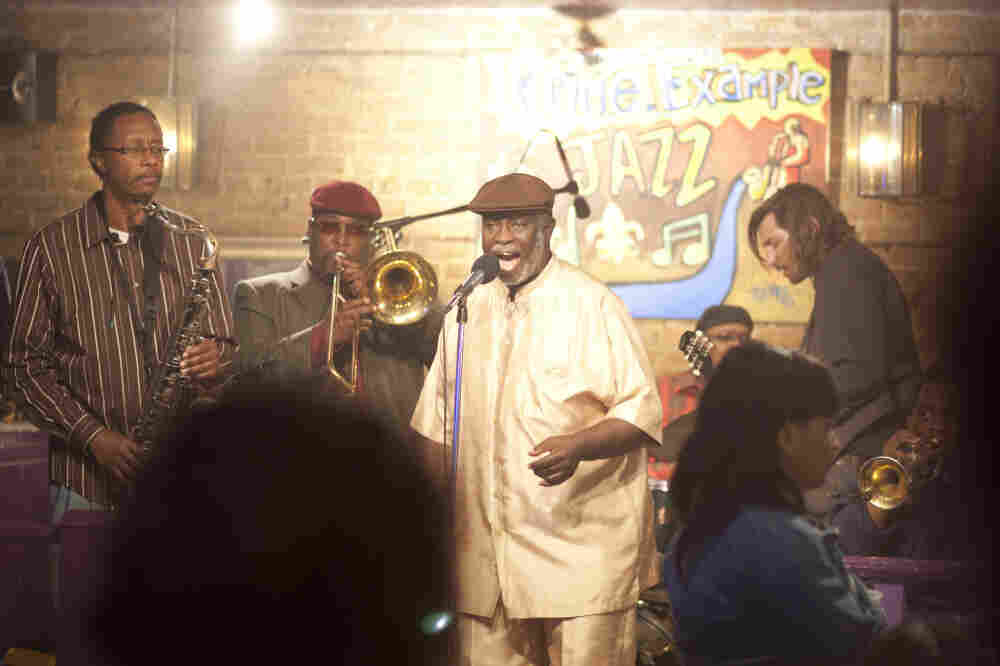 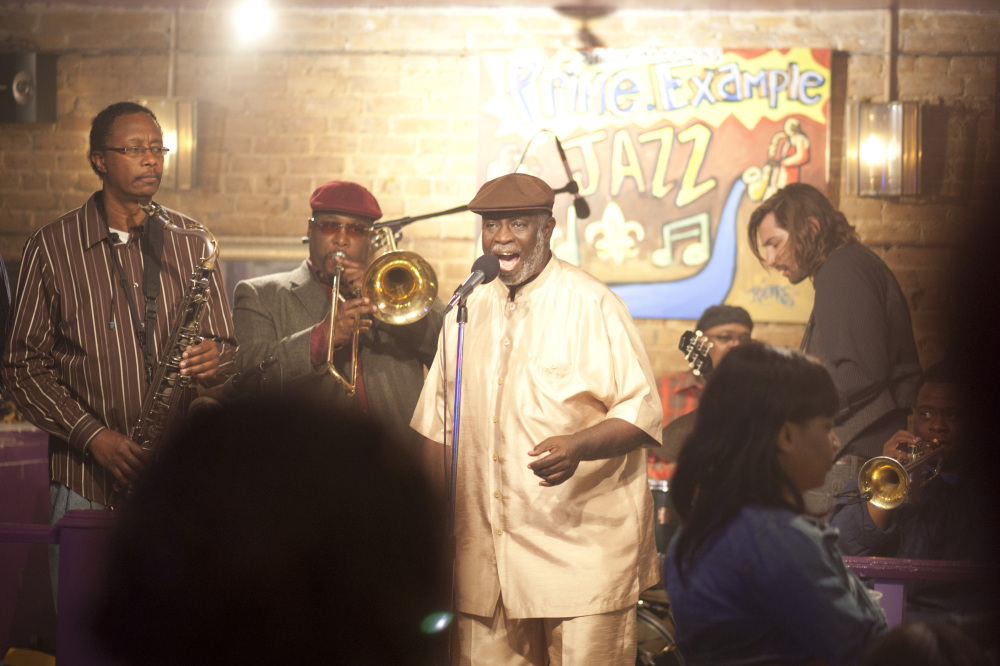 Al "Carnival Time" Johnson (center, singing) sits in with Antoine Batiste and the Soul Apostles on Treme. Batiste, the trombonist, is played by Wendell Pierce.

Two years running, Treme has featured a sensory-overload pageant of a Mardi Gras episode. Let's get right to this one. New Orleans native son Josh Jackson is here again to help break down the music.

Patrick Jarenwattananon: A lot of the first few scenes are scored to the sounds of marching bands. First, what's all this business with the Muses parade and their glitter shoes?

Josh Jackson: Muses is an all-female parade krewe named after the goddess daughters of Zeus and Mnemosyne (memory) in Greek mythology. The nine muses each represent a certain art or science — e.g., Euterpe is the muse of music. (They also lent their names to streets in New Orleans.) The glitter shoes are highly prized "throws" created by the krewe members. Where can someone throw a shoe at you and have it not be considered an insult? Only in New Orleans.

PJ: And, of course, there's Antoine's school marching band. They try to do a Rebirth Brass Band classic in "Do Watcha Wanna," but they're finding out that learning music is a lot of work. It's going to take a lot to get to the level of the St. Augustine band.

JJ: Antoine tells them that they're killing it — and not in a good way. Marching bands are no joke during carnival time, and the St. Augustine Purple Knights have long had the city's top-notch unit, the Marching 100. Trumpeter Terence Blanchard was a member of that band. We get to hear them twice: They play "Big Chief" at the Muses parade when Colson arrests the kid with the gun, and "Sweet Freedom" when Batiste and the kids are watching.

PJ: Before we even get to Mardi Gras day, we see Antoine's band gigging at a venue called Prime Example. He welcomes a fellow to the stage named Al Johnson — a.k.a. "Carnival Time."

JJ: I love Antoine's joke: "Think you can remember the lyrics?" Al "Carnival Time" Johnson is locally famous for singing a song that gets heavy rotation during the parade season. He recorded "Carnival Time" in December 1959 for Ric Records, and he didn't collect royalties to this original song until 40 years later. Gotta love the music business!

PJ: The Sonny storyline proves to be one of two good excuses to get out into the country a little bit — to explore Louisiana culture outside New Orleans. He gets stuck on an oyster boat while he's straightening himself out. And Annie spends her Mardi Gras out in Eunice, La. In one place, Mardi Gras is a totally different affair — emphatically, no beads are allowed out in the country — and in the other, Fat Tuesday is just another day at the office.

JJ: Pointe a la Hache, in Plaquemines Parish, is literally the end of the road on the east bank of the Mississippi River. I suppose there's some symbolism there for Sonny. Oyster fishing is not easy work.

Annie visits the prairie Cajuns in Southwest Louisiana for a traditional courir de Mardi Gras. It's a cultural celebration brought from France and adapted to local customs that involves riders on horseback. They move from house to house, musicians in tow, playing songs, engaging in revelry and asking for ingredients to make a communal gumbo. This sometimes means asking for chickens. Everyone drinks beer and people flagellate each other with hand whips. As fiddler Dennis McGee says in Alan Lomax's American Patchwork television series, "You gotta be a good sport to be a Cajun." 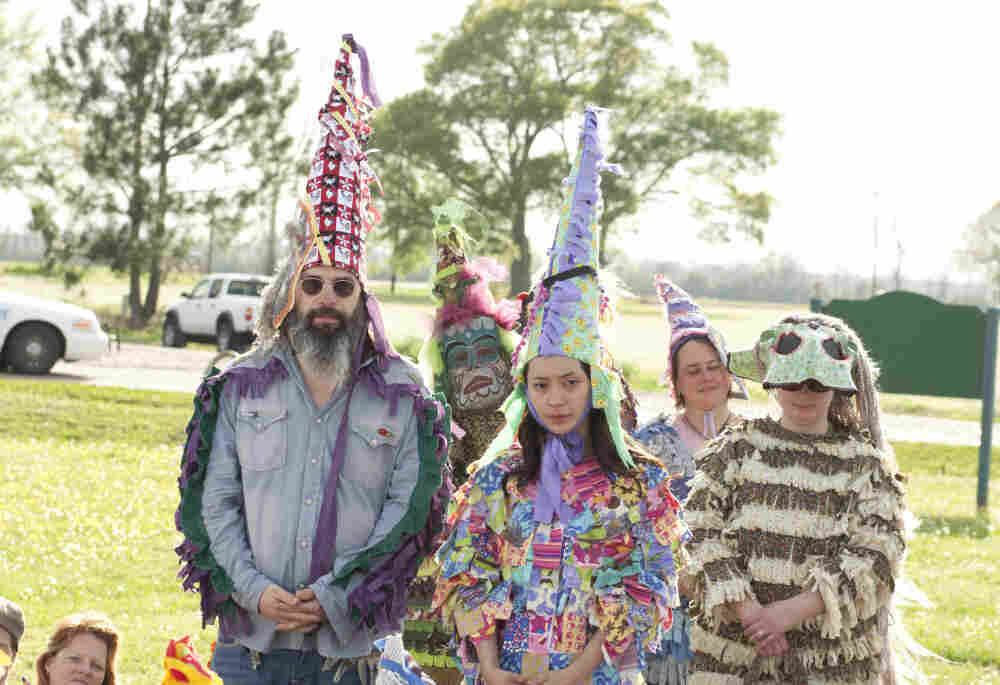 PJ: About the music at the Cajun Mardi Gras: I counted at least five performances. The first was toward the beginning of the festivities, then as they walk down the road (Steve Earle/Harley joins them), then accordion player Wilson Savoy (of the Pine Leaf Boys, who we met in season one) plays during the chicken run, then the twin fiddlers play at the grave of fiddler Dennis McGee, and finally there's the party at the end where Annie is exhorted to play a little. Help me break that down.

JJ: Ryan Brunet and the Malfecteurs played "The Saggy Bottome" at the party. Brunet is an accordion player from Raceland, La. — or "down the bayou," as we say. Fiddlers Linzay Young and Joel Savoy play "Faiquetaigue" at the graveside. By the way, Faiquetaigue is the name of this particular courir just outside of Eunice, La. Wilson Savoy plays the traditional song, "La Danse de Mardi Gras," during the chicken run. Harley joins in on "Une Bamboche Trop Tard," and the courir kicks off with a waltz, "La Valse a Jean Billeaudeau."

PJ: Back in New Orleans, Mardi Gras sneaks up on Chief Lambreaux's tribe, but not surprisingly, they're ready to go. We hear two songs we've heard before in the show: "My Indian Red" when they launch, then "Shallow Water" under the I-10 overpass. Of course, Lambreaux is impassive as ever (at least until the end of the day). 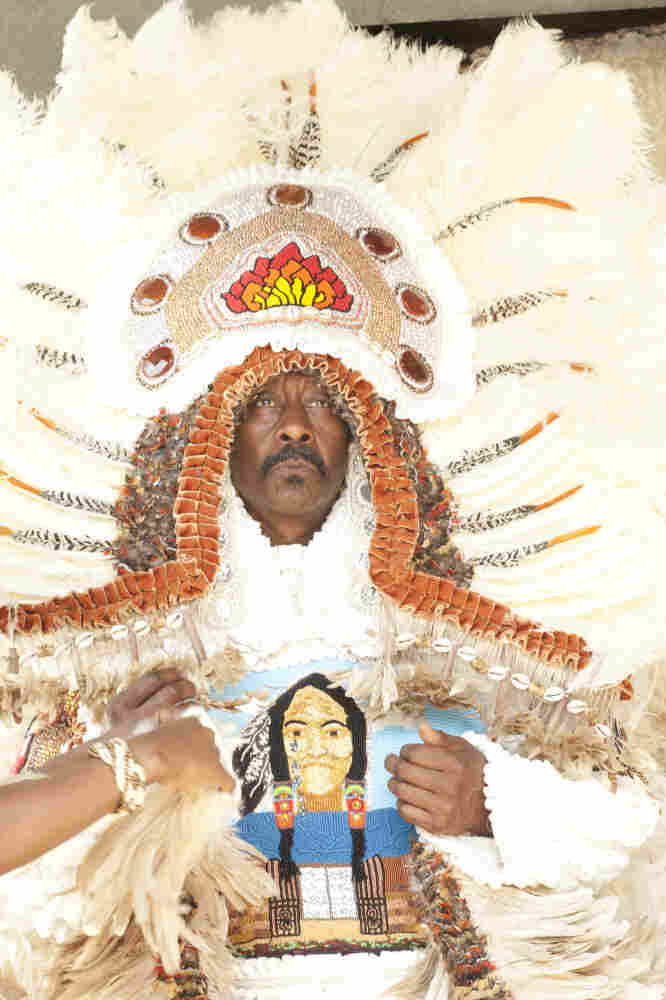 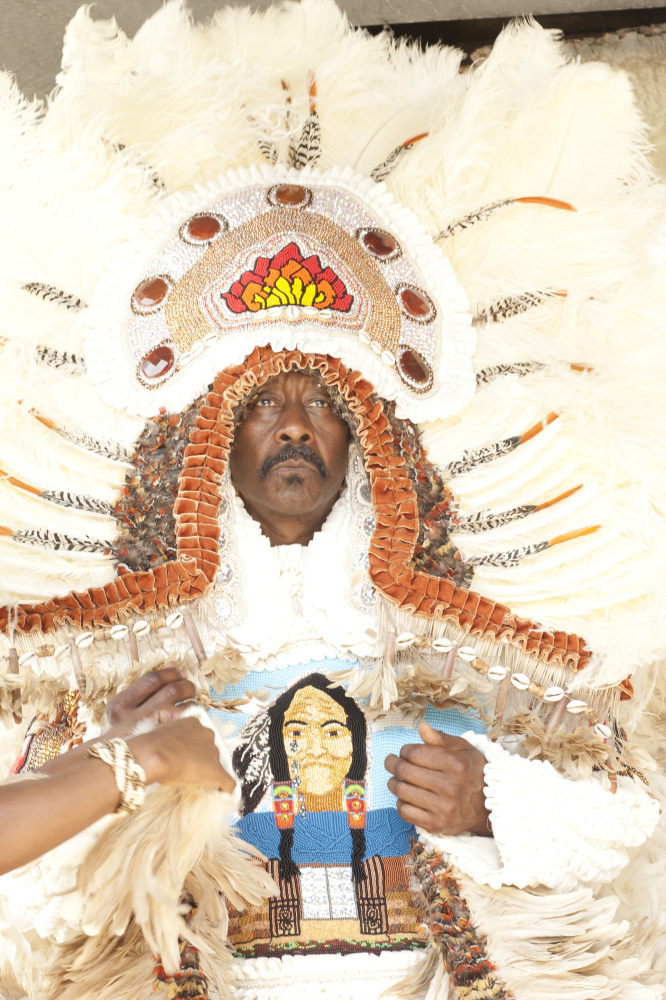 JJ: Big Chief sure looked pretty. And he found himself a queen for the night. He might seem impassive, but he still has plenty of game.

PJ: We might pause to consider the Zulu Social Aid and Pleasure Club. From Oliver Thomas' recommendation, it seems like they have a lot of very important members — and I know "Zulu" means a lot in New Orleans. Is that why their fees and "throws" cost so much? Would they normally let some rich Dallas dude off the street on the float?

JJ: Zulu Social Aid and Pleasure Club is the pride of Black New Orleans. Never mind the minstrelsy and blackface: Not everyone is comfortable with that tradition, but it stands. Louis Armstrong was a King of the Zulu. The krewe is pretty open in terms of who can ride in the parade. Just pay the fees, and you can hand out coconuts, too! But like any goof krewe, there are levels in the pecking order. Some extremely powerful people are part of the Zulu club. All politics is local, remember?

PJ: Inside Ernie K-Doe's Mother-in-Law lounge, there's a really great band playing a song with the line, "Every time I hear that mellow saxophone." Is that one of the Nevilles up there? Who's the saxophonist?

JJ: Cyril Neville is singing a great New Orleans R&B tune first recorded by Roy Montrell for Specialty Records. Earl Palmer is the drummer in the original, which makes the Stray Cats version taste like dog food in comparison. Tim Green is the saxophonist at K-Doe's. He's been getting a lot of face time this season. That's a nice thing, since he's a very good player.

PJ: Now, for a really uncomfortable storyline: When Toni and Sofia set out, they pass by a trolley carrying the great clarinetist Pete Fountain. And when Toni goes to scatter Creighton's ashes, there's a brass band there playing "Down by the Riverside."

JJ: Creighton loved to join Pete Fountain's Half Fast Marching Club (you hear the pun, yes?) at Commander's Palace, a Brennan Family restaurant where Fountain starts his Mardi Gras celebration. Fountain plays "While We Danced at the Mardi Gras." The Storyville Stompers join the revelers at St. Ann for "Down by the Riverside," where Toni opens a Hubig's Pie bag filled with Creighton's ashes and sends him down the Mississippi.

PJ: To close out the night, Davis spots Sofia at Tipitina's, watching The Radiators. From what I know of them, they're a rock band, but very much a New Orleans rock band.

JJ: Swamp rock. These guys were the original fish heads, before there were Phish heads. We hear them play "Long Hard Journey Home" and "Where Was You At?" The Radiators were famous for playing Tipitina's sets that lasted into the wee hours of the morning. They have a few hundred songs in their repertoire. The band just played Brooklyn Bowl last week, and I missed what is likely to be one of their last shows. The Radiators have officially called it quits. Again.

PJ: Once again, the background playlist was banging, too. As far as jazz goes, playing "Killer Joe" on the radio during the Mardi Gras parade was a bit odd — seemingly a way of setting up that New York-New Orleans dichotomy again — but everything else sounded appropriate to the season. What else did you hear?

JJ: Funny thing, since "Killer Joe" was written by a Philadelphian, the living jazz master Benny Golson. That was Quincy Jones' version from the album Walking in Space.

This episode was chock-full of music. I heard Earl King's "Trick Bag" during a set break for the Soul Apostles. Sonny is playing along to Little Freddy King's "Mean Little Woman." The Meters play "Cabbage Alley" in the background while the Batiste family waits for the parades. Even the U.S. Marine Corps band gets some action with "South Rampart Street Parade" when Hidalgo launches the coconut pass to his cousin during Zulu.

Mardi Gras celebrations end at the stroke of midnight. No exceptions. And this is why the music for end credits is appropriately from Alex MacMurray, "The Day After Mardi Gras." Catholics prepare for Lent and get their ashes. Those don't come from Hubig's fried pie bags, for the record.