Accessibility links
On Mingus And The Midwest: The Bunky Green Interview, Pt. 1 : A Blog Supreme For most of his 75 years, jazz's spotlight mostly eluded the alto saxophonist, even though he was in Charles Mingus' band, and lived in Chicago for decades. Now that he's recorded with a former student turned rising star, he's back in the public eye.

On Mingus And The Midwest: The Bunky Green Interview, Pt. 1

On Mingus And The Midwest: The Bunky Green Interview, Pt. 1 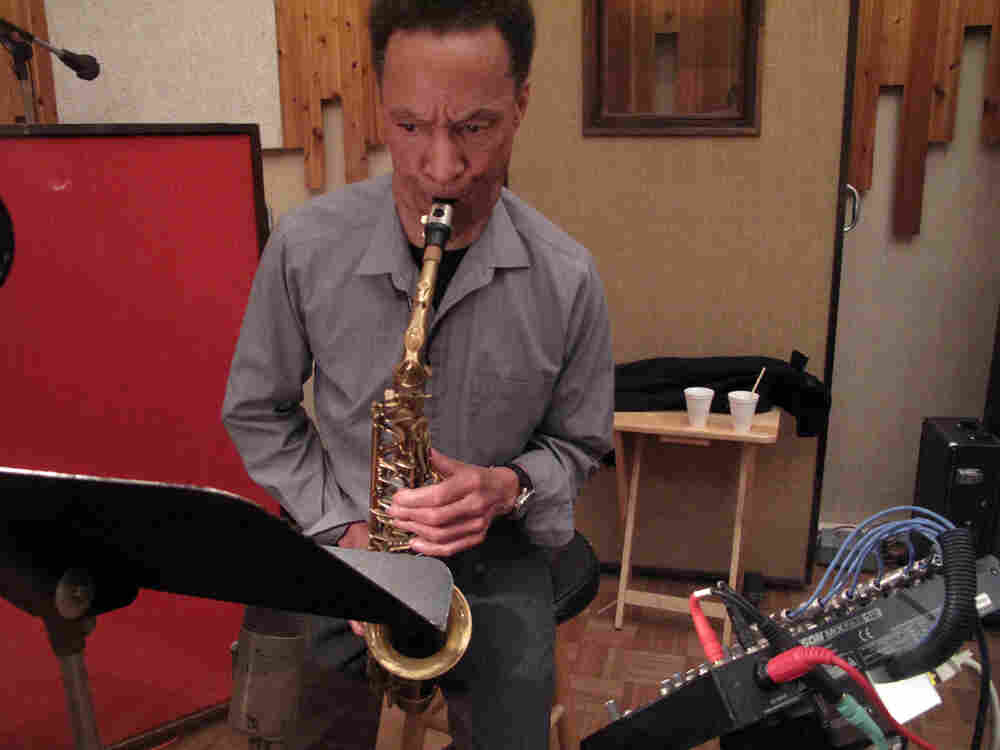 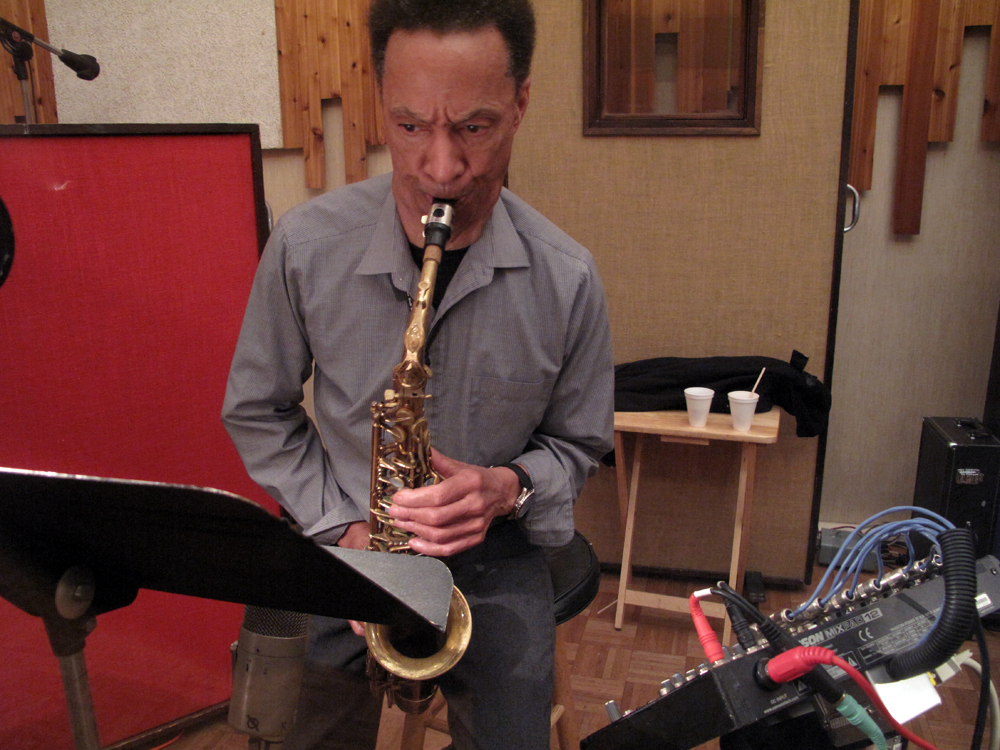 For most of his 75 years, the jazz spotlight mostly eluded Bunky Green. The alto saxophonist was briefly in Charles Mingus' band, but left for personal reasons; he spent many years on the fertile Chicago scene, but never broke out widely. He withdrew further from the public eye when, in 1989, he moved to Jacksonville, Fla. to direct the jazz program at the University of North Florida. His reputation as an educator — and, especially among forward-thinking musicians, an innovative performer — grew. His records grew out of print.

Some time ago, an alto saxophone student, 36 years his younger, gave Green a tape and asked him for his counsel. That young player was Rudresh Mahanthappa, whose name and maelstroms of sound have pulsed rapidly through jazz circles in recent years. The two co-lead a new, well-received record called Apex, out now, and the band they co-lead is beginning a four-night engagement in New York City tonight.

I recently spoke with Bunky Green over the telephone about where he's been all these years. Part two is on the way; part one of the interview covers his days on Walnut Street in Milwaukee, Wis., his brief but valuable stint in the Mingus organization and the differences between Chicago and New York.

Patrick Jarenwattananon: Bunky, you of course don't know this, but you and I both grew up in Milwaukee, of all places. What was it like when you were playing there? There must have been an active scene back then, that musicians were able to make a living playing jazz and other related musics — there was a place for saxophonists to cut their teeth on the streets.

Bunky Green: Basically that. Not too much money to be made — the people who were really gigging the most were really rhythm section people. Trumpets and saxophones, you were gigging, but not really on that level, and not really enough to make a decent living. The most important thing was that you had the opportunity to go to different venues and really learn how to play your instrument. You could go sit in and play, and it was a very friendly setting.

And that's how I grew up, on the streets of Milwaukee playing mainly on Walnut Street — remember Walnut Street? — gigging there, and learning from the older players. One guy was [tenor saxophonist] Bobby Burdett. Bobby Burdett was one of those people who never left the city, never quite got out. Marvelous player, and I learned a lot from him, and other players. That's actually the best school, the real jazz school, which is mainly the street.

PJ: Did you do any actual formal school? You must have played in a public high school band, or something like that?

BG: Ah, right. At Roosevelt Junior High (now Roosevelt Middle School of the Arts), I played in the concert band there. And that gave me the opportunity to learn how to read, and an opportunity to perform, for live people, for an audience as opposed to practicing and never performing out in public. It was a great opportunity.

PJ: So how old were you when you moved to New York?

BG: Well, I can give you approximations because I'm not really sure in terms of dates. I only deal in terms of music, to be honest. But I think I went to New York — the first time I was 17 or 18, and the second time I was about 22. And that's when I went with Mingus — with Charlie Mingus.

PJ: How did you get involved in Mr. Mingus' organization?

BG: Well, Lou Donaldson — the alto [sax] player Lou Donaldson — he told Mingus about me, another saxophone player. His saxophone player, Jackie McLean, was leaving, and Lou said, "I've got a person who can handle it. I'm going to send him down to rehearsal." And I went down to a rehearsal. The rest is pretty much history. It was great, it was great.

PJ: What did you learn from that experience?

BG: Well, I learned what I to this day utilize as my approach: That there's no such thing as a wrong note. It depends on where you move, harmonically, after you play a note. Because if you didn't have any tension, then there would be no release factor. If everything was so smooth, it would be terrible. There wouldn't be any excitement. So sometimes conflicting elements come together to be resolved. You resolve them, and people go, "Aaah!"

I'm known for a person, mainly, that started this "inside-outside" playing. Playing on the chords, but knowing so much about harmony, that I was able to map different routes to get to other harmonic areas, rather than your standard routes. It's about knowing a great deal about harmony and how it functions. And if you know a lot about harmony and how it functions, you a lot about how to destroy certain harmonic things for special effect.

[My time with Mingus] allowed me to experiment. It was a very short time — I didn't play with him long — but it was more the message and how he approached things. He told me there was no such thing as a wrong note — that's where I got it from. I didn't understand it at the time, but once I started traveling around and hearing things, and listening to other cultures, and their music, I said, "Wow, there's a lot of validity in that."

I went to Northern Africa in, I think, 1964 or something like that — I won some contest at Notre Dame, and I ended up in Algiers, Africa. And I heard a guy playing bagpipe, and it blew my mind. I said, "Wow, only two notes, huh?" Just a drone of a fourth, and a fifth, and that's it. And the rest is coming in and out of that stationary thing, and heading out again, and getting all these melismatic things — I was very much impressed by him. And it kind of stayed with me. So you learn a lot from every culture if you keep your eyes and ears open, and you keep your mind free, mainly. I mean, you get set in your ways, and the rebel becomes the conservative. And maybe that's not the greatest position to be in if you're dealing with any kind of creative art. ... If it strikes you, from your own individual perspective, as a route to move into uncharted waters, and not be afraid, then you need to go for it.

PJ: I'd agree! I'd like to ask you about the rest of your time in New York, because it strikes me that it wasn't very long. A short stay with the Mingus band, and you eventually moved to Chicago, where you stayed a number of years.

BG: Yep. We played the [Village] Vanguard, I remember that, and we played some other club, and we set off for California, playing along the way, and ended up in California — San Francisco, and playing around that area. And on the way back, I left, because I had to take care of some urgent things. I was supposed to meet [the band] back in New York — I just never made it.

After being back in Milwaukee for a while, I moved to Chicago, and became kind of a Chicagoan. They kind of adopted me, you know?

PJ: You were in Chicago during the time of the AACM. Do you feel like you had any connection or awareness of what folks were doing?

BG: No, the only thing I know — I was aware of it because Richard Abrams, who is Muhal, one of the finest musicians on the planet — he helped to form that entire thing, and was really kind of the buzz behind that. He really did a marvelous job, and basically, he just had an open mind for creative music. And really, he understood, and still understands, that it's about doing your own thing. It's not about me doing your thing; it's about me doing my thing. ... I played with Richard in Chicago — marvelous piano player. And just a beautiful person.

PJ: He was a really nice guy when I had a chance to meet him myself.

PJ: Do you think there's a difference in the scene and the feeling between Chicago and New York?

BG: Well, I think New York — as great as New York is, and New York is fantastic, it's the mecca — New York, at the same time, can be very conservative. Because you know, we're talking Broadway, and we're talking tradition, and things get in place, and they stay in place, and that's it. Anyone coming along with something new has something of an upward struggle. Whereas in Chicago, it's a little more laid back, and a little more of an environment where you can spend time doing your own thing and growing, and not have to worry about fitting it into any mode.

PJ: So you feel that the scene in Chicago was a little more accepting of experimenting and coming into your own?

BG: I'd say Chicago, for me, there wasn't so much pressure to conform. It's just more of an open scene. It's still like that. Tradition dies hard. And tradition shouldn't die! My God, we wouldn't have anything to build on — I'm not talking about tradition dying. Tradition is everything! But tradition should be, or maybe is built by steps. And when those steps start slowing down, it's a problem, whether it be in whatever art.

Part Two is on the way.