Accessibility links
Jazz Artists On Five Classic Pop-Rock Sides : A Blog Supreme Did you know that Sonny Rollins played on a Rolling Stones song? Hear that and other jazz cameos from famous pop-rock tracks. 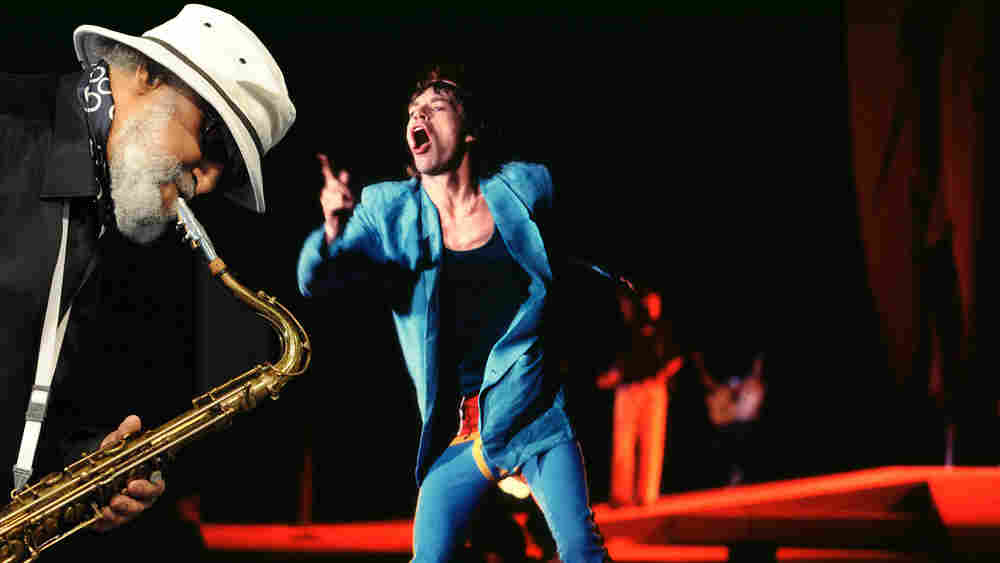 Back in 10 and 20 B.E. (Before Elvis), jazz artists were the rock stars of their time — think Benny Goodman and his star sidemen Harry James and Gene Krupa at Carnegie Hall, tenor titan Illinois Jacquet laying down the law for Jazz at the Philharmonic, or a skinny big-band singer named Frank Sinatra stepping out on his own, bringing the house down and teenage girls' temperatures up at the Paramount in New York City in 1943.

Times and mass-culture tastes changed, and for the past few decades, jazz artists have only occasionally enjoyed anything like the high-profile success that modern music stardom affords. Pop and rock performers, however, inspired by their own fandom and desire for top-notch musicianship, have often sought out jazz artists to play on their records; for example, bassist Richard Davis and drummer Connie Kay helped steer Van Morrison's Astral Weeks to masterpiece status, Wayne Shorter and Phil Woods each got the call for Steely Dan sessions, and West Coast saxophonist Curtis Amy was on board for both The Doors' "Touch Me" and Carole King's "It's Too Late." Here are five more notable guest shots by jazz artists on pop-rock records.

South African trumpeter Hugh Masekela had already begun to establish a name for himself in America when he sat in on a classic date by The Byrds. A prior connection existed between Masekela and the folk-rock group: They shared the same manager, and Byrds bassist Chris Hillman had played on some Masekela sessions. Hillman later credited this for sparking some of the creative excitement on The Byrds' Younger Than Yesterday, an album that included Hillman and Roger McGuinn's short-but-epic "So You Want to Be a Rock 'n' Roll Star." Masekela's trumpet underlines and punctuates the song's gate-charging riffs and its mock-advisory sentiments, underscoring its chronicling of the dutiful excesses of rock 'n' roll fame. A year later, he'd enjoy his own rocket-ride up the charts with the hit "Grazing in the Grass."

Singer-songwriter Phoebe Snow brewed an intoxicating mix of influences for her 1974 debut, which was propelled to commercial success largely on the strength of this Top 5 single. Saxophonist Zoot Sims, of Four Brothers fame and much more in the jazz world, plays a solo that lifts the song's already-dreamy mood into a swooning, non-verbal spell of blissful longing. Sims wasn't the only jazz man providing a little musical poetry on Snow's LP; the singer also enlisted, among others, pianist Teddy Wilson and bassists Ron Carter and Chuck Israels.

Alto saxophonist Phil Woods has built up a jazz legacy that spans nearly 60 years, but his appearance on this Billy Joel hit alone might make him one of the most-heard jazz musicians on the planet. It also injects Joel's song with the creative, time-tinged soul of a bop romantic. As Joel, himself a longtime jazz fan, told Jazzwax's Marc Myers in 2009, Woods "took it to a whole other stratosphere. All of a sudden, now it wasn't just a lounge ballad. It was potentially a jazz classic." Woods' Top 40 immortality translated rather oddly for the jazz veteran, however. He later said that, after the record came out, a teenage musician asked him, "Are you the guy on the Billy Joel record?" and went on to inquire if Woods had ever led any dates on his own.

The Greatest Rock 'n' Roll Band in the World meets the Saxophone Colossus. The Rolling Stones asked Sonny Rollins to play on the band's 1981 Tattoo You album after a mutual friend brought Mick Jagger to see Rollins at the Bottom Line in New York City. Rollins called his appearance "an experiment (that) worked out as far as I was concerned," though he turned down a subsequent offer by the band to tour with it. His spiraling, street-savvy saxophone parts help put across the song's melancholic sense of lovelorn loneliness in the midst of urban plenty.

Elvis Costello said he was searching for a "particular plaintiveness" when he went looking for a trumpeter to provide an extra layer of musical nuance for a song about an English town's industry being revived by the fortunes of war. Costello's first choice, Wynton Marsalis, was unavailable, but after happening across a mention of an upcoming Chet Baker performance in England, the songwriter went to the club where the trumpeter was appearing and introduced himself. Baker had never heard of Costello, but he agreed to do the session, as long as he was paid scale. (Costello replied, "How about we give you double scale?") With the trumpet's keenly inventive and brooding meditation on ominous reward, "Shipbuilding" offers additional evidence that Chet Baker in the 1980s was more than just a wasted talent and Let's Get Lost icon in the making.