Accessibility links
Newport Jazz 2011: Dancing In The Rain : A Blog Supreme How we learned the perils of the outdoor jazz festival — and how good music went on in spite of it.

Newport Jazz 2011: Dancing In The Rain

Newport Jazz 2011: Dancing In The Rain 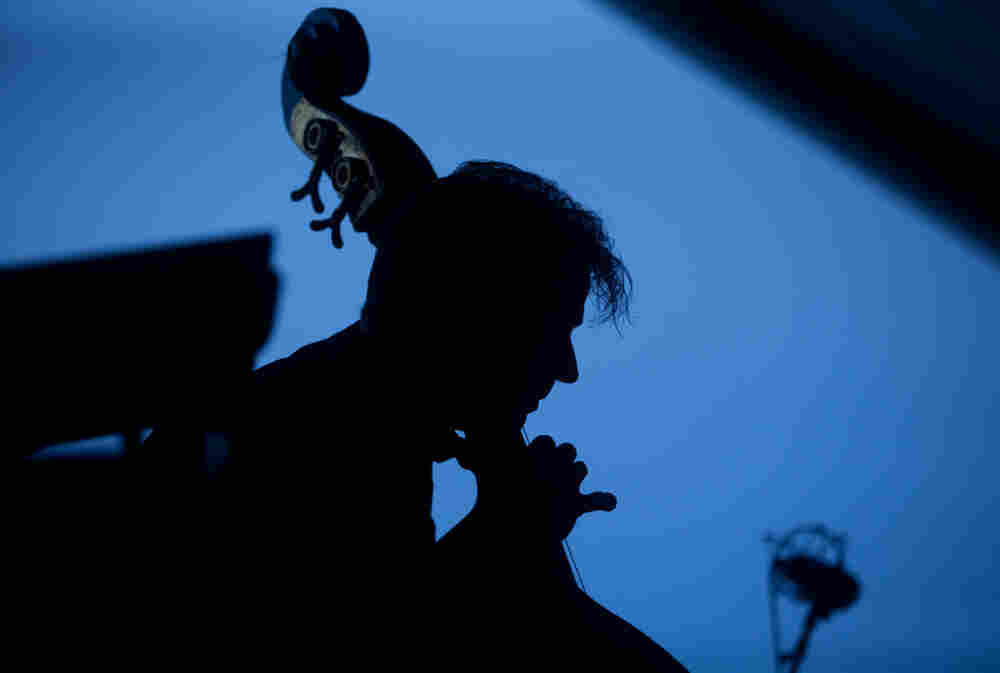 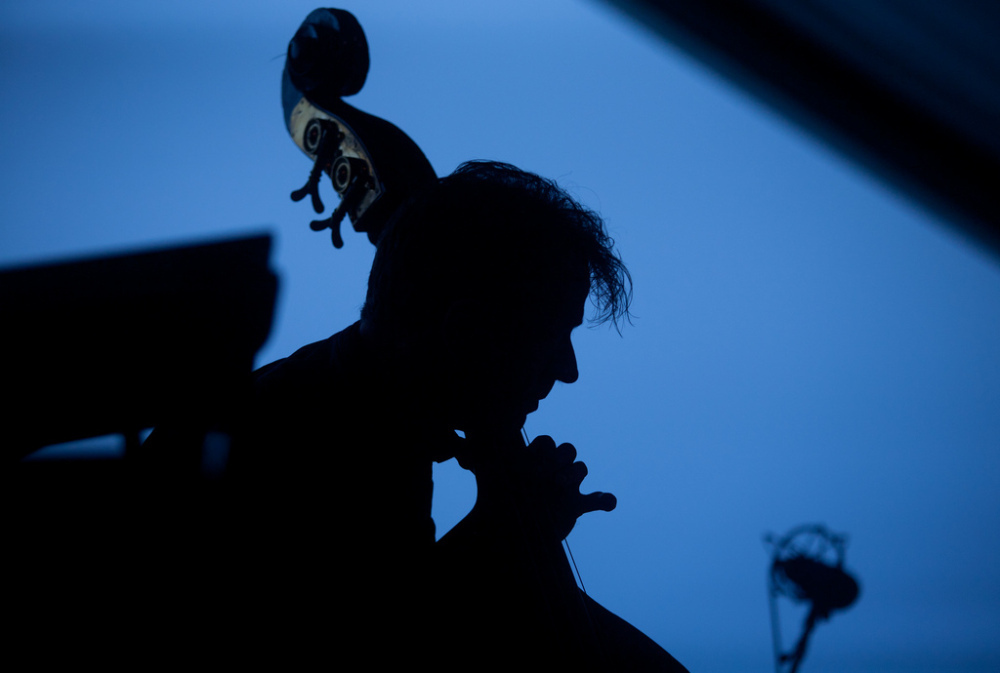 At the Newport Jazz Festival this weekend, I was joined by WBGO web producers Tim Wilkins and Alex Rodriguez, who were helping with our broadcast and recording. You can see what Alex and Tim were up to at wbgo.org/newport. And remember, you can hear NPR Music recordings of Newport sets at npr.org/newportjazz.

Somehow in all that, we all found time to hear some music. This morning, we got up early — even before coffee — to recap what we heard via Instant Messenger.

PJ: Well, yesterday I think we learned firsthand the perils of the outdoor music festival.

AR: I was impressed, actually, by how many fans stuck it out in the terrible weather!

TW: All part of the Newport experience. 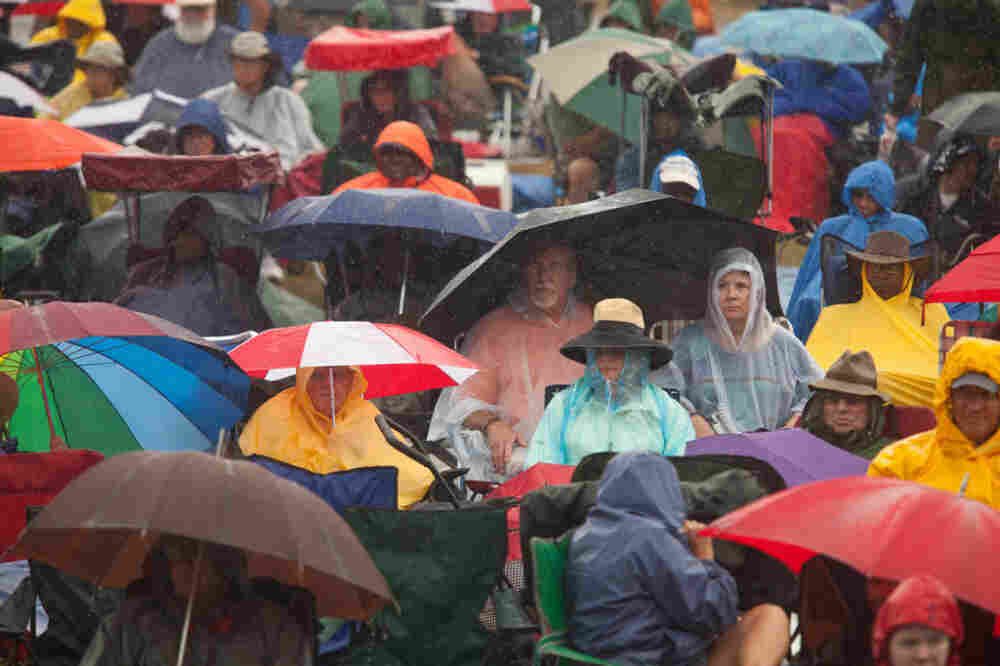 The crowd at the Fort Stage on Sunday of the 2011 Newport Jazz Festival. Erik Jacobs for NPR hide caption

PJ: It was almost Woodstock/Bonnaroo-ish at times, or threatening to become that mud-wise: a good soak for the first half of the Sunday program, with intermittent showers throughout. And there was an effect on the audience, for sure. But yes, a good deal of hardy souls still remained.

TW: But no naked dancing in the mud, like there used to be (at the Folk Fest) in the '60s. If anything, the weather thinned the crowd just enough to allow folks to get close to the music on all three stages.

AR: Those fans were certainly rewarded. Some of the early Sunday sets, when the rain was coming down hardest, were among my favorites: John Hollenbeck Large Ensemble, Mingus Big Band, James Farm to name a few.

PJ: I saw John Hollenbeck draw a pretty impressive crowd. I'd like to think that's because he was doing some super interesting covers there — Imogen Heap, Kraftwerk, Jimmy Webb — with both Theo Bleckmann and Kate McGarry singing, and Uri Caine (piano) and Tony Malaby (tenor sax) soloing. Among other first-rate soloists of course.

AR: Yes, Malaby's solo on "Man of Constant Sorrow" was something else!

TW: That's a lot of creative minds in one place.

PJ: Oddly enough, he even arranged Ornette Coleman's beautiful "All My Life." (Coincidentally, fellow drummer Matt Wilson arranged another Ornette Coleman vocal feature in "What Reason Could I Give" for his quartet + strings set last year at the exact same time: the first act on Sunday at the Quad Stage.) But maybe the tent was full just because nobody wanted to be out in the rain! Alex, you said the Mingus Big Band was great — I didn't catch too much of that.

AR: Mingus Big Band was coming off of their Grammy win for Best Large Ensemble. So they had plenty of buzz going in, and brought enough of Mingus's aggressive swing vibe to keep the main stage crowd (which has no tent) happy to be there. I had forgotten how jam-packed that band is with NYC jazz scene veterans: my teacher Conrad Herwig, Wayne Escoffery, Seamus Blake, Helen Sung ...

PJ: And having those cats play Charles Mingus tunes — I mean, that's got to set the bar pretty high just to start. Tim, what were your highlights from yesterday — or the festival in general?

TW: The best part for me was after the rain yesterday. Both performers and audiences were loosened up. I think of Anat and Avishai Cohen's duets at the end of his set. And the "free" encore to Steve Coleman/Ravi Coltrane/Miguel Zenon jamming.

AR: Yes, that was quite the jam those three had going, with Ravi's rhythm section.

TW: It had one of the only real encores at the festival, because of the tight schedule? It was the fans who called them back to the stage as they were leaving. Also, Hiromi was a real surprise to me. I must say, I didn't expect such range from her.

PJ: Tell me more about Hiromi. She played two sets this festival, right?

TW: Both of Hiromi's sets were pretty hot. Apparently, this was the first solo piano set on the main stage in festival history. Remember, [festival founder] George Wein is a pianist, so for him to decide to give this to Hiromi, he must like her playing. As did the crowd.

AR: Her trio set on the Quad Stage seemed to have them hopping more than her solo engagement on the main stage, though.

TW: She did engage the crowd impressively, and the range of her palette impressed me. I heard stride and Latin references thrown in, with surprising sudden shifts in color or tempo. I guess I underestimated her.

PJ: She's a bundle of energy for sure. I missed the trio set, but someone in the crowd remarked to me (and I paraphrase) that "the second coming of Art Tatum is a small Japanese woman."

TW: Well-put. The combination of showmanship and virtuosity is apt.

AR: All good picks for an extra set — they all packed the tents/stages for both shows.

TW: True on all counts. Only Shorty played the same set twice, but had the crowd eating out of his hand, and rightly so. I didn't expect to hear Louis Armstrong, Hendrix, James Brown and John Bonham all rolled into one band ... at a jazz festival, no less. 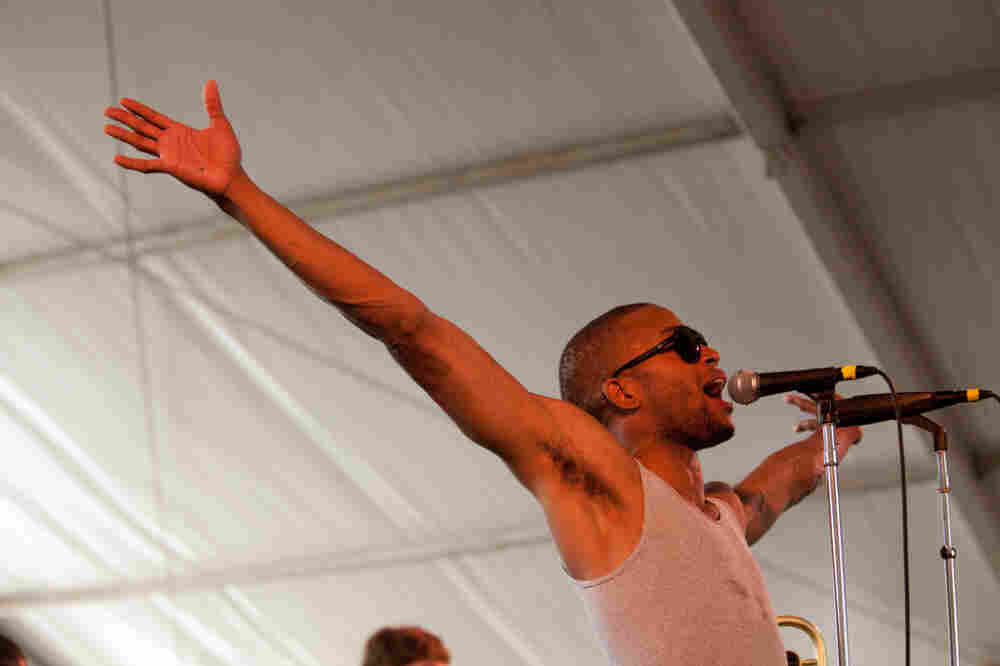 Trombone Shorty addresses the crowd at the Quad Stage at the 2011 Newport Jazz Festival. Erik Jacobs for NPR hide caption

AR: Try listening to Trombone Shorty and NOT being compelled to dance!

PJ: Wait, people like to dance? At a jazz festival? Well, I never.

TW: I was lucky to pass by by the main stage just as security decided to turn the camera pit into a "mosh pit" for Shorty ... a lot of boogie-ing going on. And he loved being a little closer to the crowd.

PJ: Trombone Shorty is from a musical family in the Treme in New Orleans. He's got foundation in his funk. By the way, the live show simulacrum comes out this September, in the form of a new album called For True.

TW: With Shorty, it was great to hear someone who understands how "traditional" jazz can be truly electrifying, when played the right way. We forget that King Oliver's band used to be called "Hotter than a 45" (caliber pistol, that is).

AR: Angelique Kidjo also had the main stage crowd dancing like mad on Sunday — people seemed to relish the chance to get up and move to the beat.

PJ: Yea man. My boss said that was one of her favorite sets this festival. Not really jazz, but she puts on a very musical show. She had jazz musicians there too — Joe Martin, the bassist, for instance. 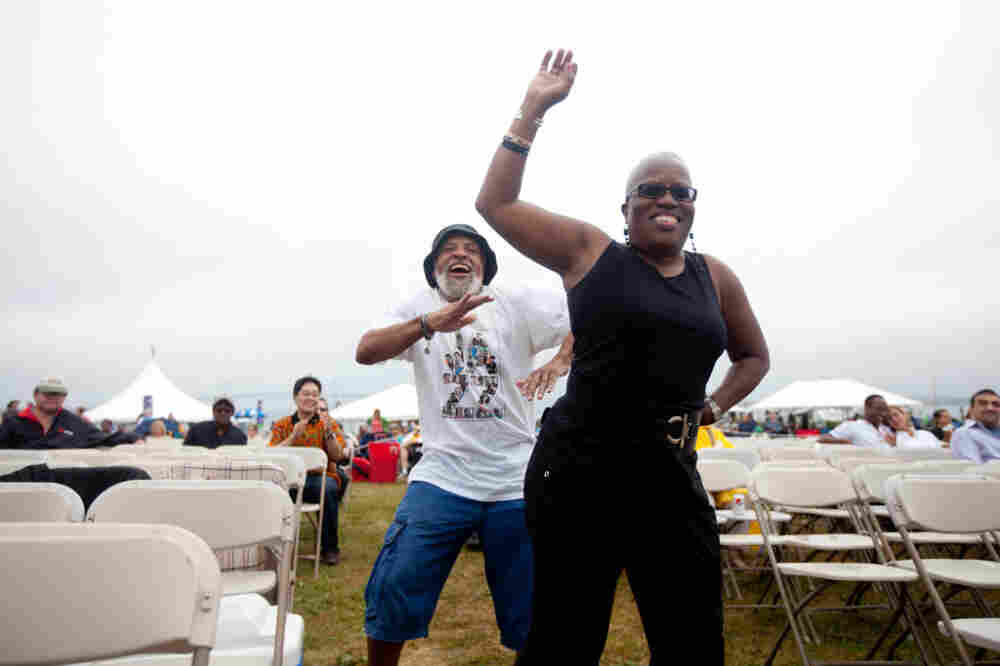 TW: Newport kind of invented the pattern that many jazz festivals follow of booking "non-jazz" or "mild jazz" headliners. But this year, interestingly, the lines were very blurred. Hard to say any of the headliners weren't jazz bonafides, or that people really cared ... they loved it all.

PJ: You know, Lara Pellegrinelli made a good point in her Newport story she filed for Weekend Edition this Sunday: The term "crossover" is a marketing invention, and a dated one at that. Today's young musicians who come from jazz also come from an age where jazz isn't pop music. And their jazz reflects their times.

TW: I think there's a story there. One old-timer I met complained that now that there are multiple stages, the festival lacks some of the energy of having multiple generations on a single stage and in one audience. But this year, maybe because of the weather, or because jazz tastes are changing, things seemed pretty fluid.

AR: It's certainly true that the elder statesmen were underrepresented. Roy Haynes and Jimmy Heath, for example, were at Litchfield Jazz Festival this weekend in nearby Connecticut.

TW: Maybe that represents George Wein's changing tastes. I saw him at the dingy rock club Kenny's Castaways during Winter Jazzfest. He's really engaged with the music in a new way since his wife passed and he un-retired a few years ago. And he brings a musician's curiosity to the young musicians he books/hears.

AR: Although Randy Weston still put on a great show, and the Bunky Green/Rudresh Mahanthappa Apex performance was a great cross-generational encounter. And I can't forget Charles Lloyd with Eric Harland and Zakir Hussain! That was some stuff.

PJ: I was going to say: Randy Weston's trio set was the kind of music which had presence about it. You felt like you were in the midst of something deep. He has this pan-African way of looking at the world, which you can buy into or not as a listener. But the sounds and textures his bassist Alex Blake and percussionist Neil Clarke elicited — and the spiky and distinctive way Randy plays the piano. There was wisdom in the room — or tent, as it were.

TW: Alex Blake says some interesting things about how he plays the bass like an African instrument on his conversation with host Josh Jackson. They're a very dedicated group.

PJ: Charles Lloyd: I missed Sangam, his trio with Hussain and Harland, but my boss — who was highly skeptical that a saxophonist could make good music with a percussionist and a drummer — left totally blissed out. And Bunky + Rudresh: what a great story, and what riveting music. Bunky once explained this music to me this way (and I paraphrase): He's one of a handful of saxophonists who know where they start and know where they want to end, and are figuring out new ways to get from one to the other. When a young student named Rudresh Mahanthappa sent him a cassette tape for advice, he knew Rudresh was part of that fraternity. Years later, they're leading a band together.

Gentlemen, we've got to wrap up here. Closing thoughts: anything we haven't mentioned yet? Anything else that stuck in your craw?

TW: Newport was definitely proof that the festival (as a concept, and this one in particular) is not dead! A lot of energy and plenty of reasons to celebrate, and people did.

AR: As it has for decades, Newport really delivered this year: thoughtful programming, top-flight talent, and a well-produced event that made for one of the summer's great large-scale jazz "hangs"!

TW: Across generations and demographics too, which was nice to see.

AR: Yes — all the little kids digging the music like crazy on Saturday is the image that will stay with me.

TW: Yet there was something for every kind of fan. Nice to cultivate a "core audience" that's by definition diverse and musically curious.

PJ: I imagine that's what George Wein is going for these days. He knows that he won't be around forever, and also knows his festival won't be around much longer either if his core audience doesn't renew itself.

TW: A few years back he didn't really think much about his "legacy" in jazz, but now he does, which is great for the music.

AR: Indeed — chalk up this year's event as a testament to that.

PJ: I suppose only coming years will tell if he's been successful. I hope I'll see you at future incarnations of the Newport Jazz Festival, fellas?

AR: Indeed! I'm moving to Los Angeles soon, but if there's any one festival that is going to be worth a trek back east, Newport is it.

TW: Yes, looking forward to it! But now I need some coffee ...

PJ: Until the next NPR Music + WBGO broadcast — which happens tomorrow (!) — see you guys. And yes, time for coffee!