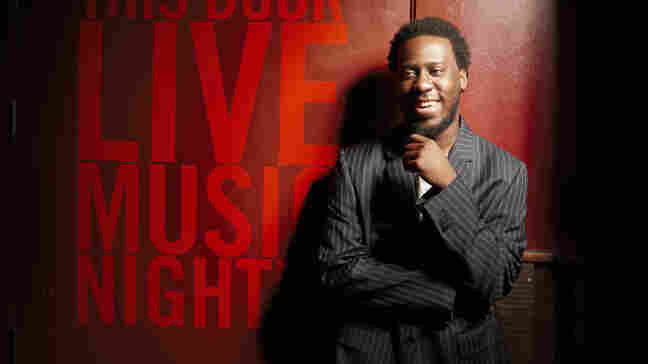 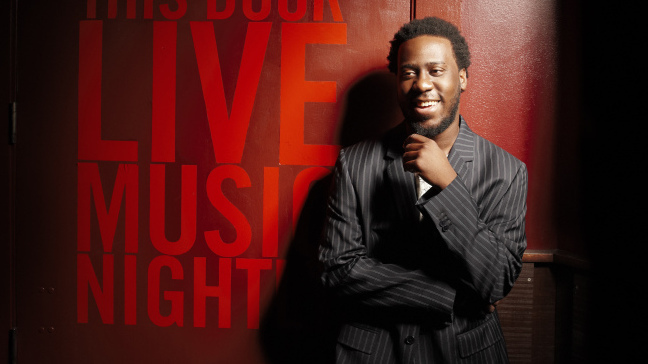 The First Time Attendee's Guide To The Monterey Jazz Festival

What makes the Monterey Jazz Festival fantastic is also what makes it frustrating: too many bands on too many stages, with overlapping performances. How to decide between James Farm (artist-in-residence Joshua Redman's sublime new quartet), John Pizzarelli (with his dad, Bucky, and his wife, Jessica Molaskey), and the Scott Colley Trio with Chris Potter and Antonio Sanchez? Between Sonny Rollins and the Joey DeFrancesco Trio with guest Bobby Hutcherson? Between a new film about Dave Brubeck and a conversation with NEA Jazz Master Orrin Keepnews? (There's more to MJF than just live music.)

Those are just a few of the Solomonic choices we face this year. You can run from one event to another, catching bits and pieces, but to me, that's channel surfing. When I can, I like to hear whole sets.

In that spirit, here's a suggested game plan that will give you a sense of the Festival's breadth and depth and not leave you feeling that you've missed something essential ... which, sorry to say, you will no matter what you see.

6:30 p.m., Garden Stage: Robert Glasper Trio. For the first half-hour, this will be the only band playing on the Monterey County Fairgrounds — the official kick-off show. That it's Glasper's trio speaks volumes. The pianist/composer is the very model of a modern jazz musician, with one foot in tradition, the other in today, stepping confidently between jazz and hip-hop, acoustic and electronic. As the showcase artist, Glasper will perform three times, tonight with Derrick Hodge on bass and Chris Dave on drums. Way to start, Monterey.

8 p.m., Night Club: Carmen Souza. The festival has a bit of a Latin/world thing going on this year. In Lisbon-born Souza, Africa meets Cape Verde meets Afro-Latin meets contemporary jazz. That spicy mix is filtered through a singular voice and style that some have compared to Billie Holiday, others to Nina Simone. I hope she sings Horace Silver's "Song for My Father."

9:50 p.m., Arena (Jimmy Lyons Stage): John Pizzarelli Quartet with special guests Jessica Molaskey & Bucky Pizzareli. Guitarist and singer John Pizzarelli is so charming that you want to give him the key to your house. I love that he performs with his father, Bucky (now 85), and his wife, singer/actor Jessica Molaskey. All are consummate entertainers who want to make you happy. Expect sophistication, wit, warmth and the Great American Songbook, fresh and sassy.

11 p.m., Coffee House Gallery: Helen Sung Trio. Festivals are, in part, about trying something new. I've never heard pianist/composer Helen Sung, but I plan to, especially after learning that she was on the classical path in college until "a Tommy Flanagan solo changed everything." Plus, I like the idea of ending the first night in the intimate Coffee House. With Reuben Rogers on bass and Marvin "Smitty" Smith on drums. 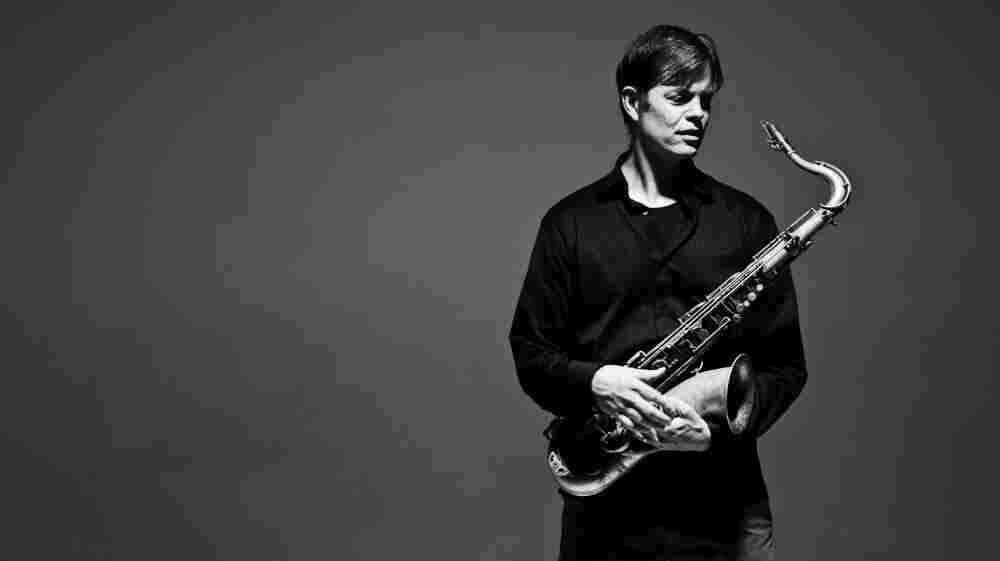 Donny McCaslin will perform with his own group on Saturday night — but not before undergoing a public blindfold test with a DownBeat writer earlier that day. Courtesy of the artist hide caption 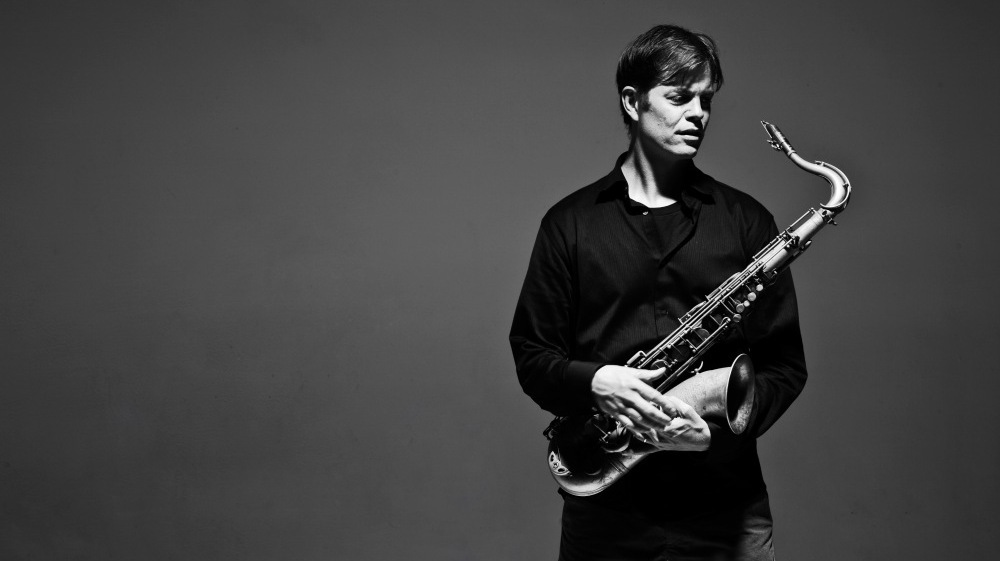 Donny McCaslin will perform with his own group on Saturday night — but not before undergoing a public blindfold test with a DownBeat writer earlier that day.

2 p.m., Dizzy's Den: DownBeat Blindfold Test Featuring Donny McCaslin. Admittedly more for jazz nerds than the general partying public, the annual public Blindfold Test pits jazz writer Dan Ouellette and his record library against a jazz artist willing to be stumped. Dan plays a tune, and the jazz artist — this year it's saxophonist McCaslin — tries to guess the performers. This usually turns into a far-ranging discussion with audience participation, and later ends up as an article in DownBeat magazine.

3 p.m., Arena: Huey Lewis and the News. Monterey's Saturday afternoons have long been given over to blues and even pop acts, so there's no need for a jazz/not-jazz discussion here. If Huey and his band play "The Power of Love," I won't complain. But they'll mostly focus on their latest release, Soulsville, which mines the Stax archives.

4 p.m., Dizzy's Den: Jazz on the Screen: A Conversation with Clint Eastwood and Wendell Pierce. The festival's single largest jolt of media star wattage, all talking about jazz at the movies. Writer Ashley Kahn hosts. You know you want to at least peek in.

8 p.m., Arena: Geri Allen & Timeline: A Jazz Tap Tribute to Sammy Davis Jr. It seems everyone is talking about pianist/composer Geri Allen these days, and the attention is long overdue. Her group Timeline includes a tap dancer — a human rhythm instrument. The Jazz Tap Tribute to Sammy Davis Jr. is the Festival's 2011 commission: That's a big deal. Over the years, the festival commissions have been some of my favorite events.

9:30 p.m., Coffee House: Bill Carrothers Trio. I'm lucky to have heard Carrothers play several times in Minneapolis/St. Paul, where I live. He's a gifted and questing pianist/composer with a deep interest in history, reaching all the way back to the Civil War and Stephen Foster for musical ideas. Carrothers lives in Michigan's Upper Peninsula but spends most of his professional life performing in Europe. He's here with Drew Gress on bass and Bill Stewart on drums.

10:50 p.m., Arena: Herbie Hancock. Each year, the Festival brings in two or more superstars. This year it's Hancock and (on Sunday night) Sonny Rollins. Hancock appears with Lionel Loueke on guitar and vocals, James Genus on bass, and Vinnie Colaiuta on drums.

Note: My plan does not include James Farm because they're coming to Minneapolis the week after the Festival and I'll see them there (twice). But unless you live along Redman's current madcap touring route, please don't miss this exceptional saxophonist and his collaborative band: Aaron Parks on piano, Matt Penman on bass, Eric Harland on drums. Their self-titled debut CD, out earlier this year, has earned raves. They're appearing twice at Monterey: on Saturday night in the Arena at 9:20 p.m., and again at Dizzy's Den at 11 p.m. On Sunday afternoon at 1 p.m., Redman will join the MJF Next Generation Orchestra in the Arena. 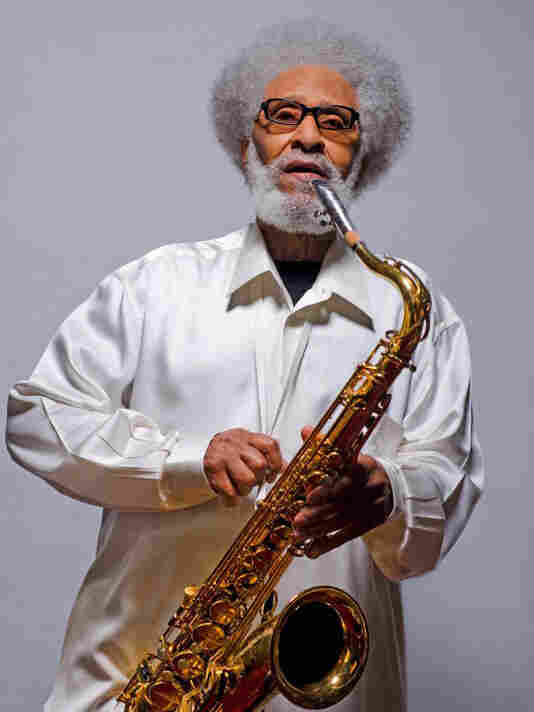 Sonny Rollins is the headline act for the final day of the 2011 Monterey Jazz Festival. John Abbott/Courtesy of the artist hide caption 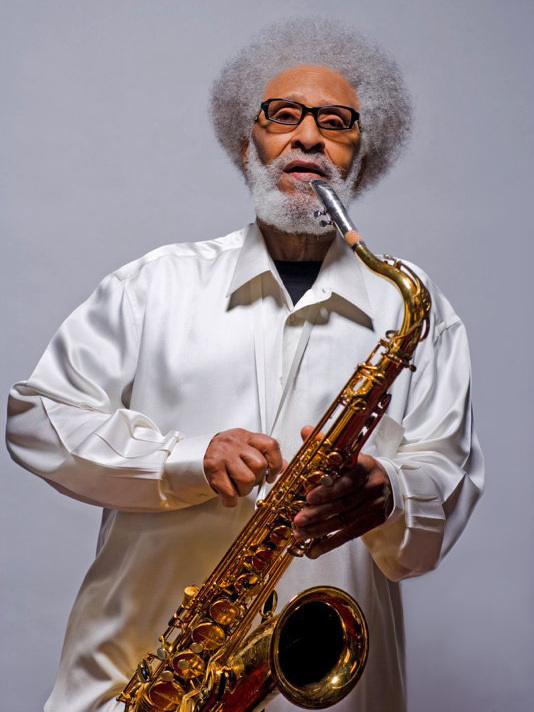 Sonny Rollins is the headline act for the final day of the 2011 Monterey Jazz Festival.

5:30 p.m., Garden Stage: Tia Fuller Quartet. In her other life, this exciting young saxophonist tours with Beyonce. She's a committed, passionate player, composer and educator. The Garden Stage is the only open-air stage on the grounds besides the Arena, and I suspect the sounds of Fuller's playing wafting past the food booths and arts/crafts vendors will draw a crowd.

7 p.m., Night Club: Benny Green Trio with Special Guest Donald Harrison. The last two times I've seen pianist/composer Benny Green, he was playing as a sideman, first with Bucky Pizzarelli and then with Anat Cohen. He's back leading his own trio with "the Washingtons," Peter on bass and Kenny (no relation) on drums. Bassist Ben Wolfe is scheduled to do this date, and so is the great saxophonist Donald Harrison. Together, they'll explore the music of Thelonious Monk.

7:30 p.m., Garden Stage: Steve Coleman and Five Elements. As much as I hate doing this, I'll have to leave Benny before the end to catch at least part of M-Base pioneer, spontaneous composer and alto saxophonist Coleman. He's with the latest incarnation of his Five Elements band. This might be the most "out" the Festival gets this year.

9 p.m., Arena: Sonny Rollins. If you're at the Festival and you have Arena tickets and you don't see the Saxophone Colossus — who becomes more magnificent with each passing year — there's only one possible reason: You've eaten too much peach cobbler and have passed out under a picnic table.

9:30 p.m., Dizzy's Den: Joey DeFrancesco Trio with Special Guest Bobby Hutcherson. If you see Sonny, you'll miss much of Hammond B-3 monster Joey D., but don't despair. This set is scheduled to go until 11, and if the gods are kind, no one will watch the clock that closely. It's also possible that at the Night Club across the way, the Robert Glasper Experiment will still be playing. If you can, stick around until the last note from the last instrument dissolves into the cool night air.

And now, a confession: I'll probably end up bouncing around more than I mean to. How could I wait to see James Farm? How can I not see Chris Potter, Matt Wilson, Poncho Sanchez or Raul Midon? And I'm always pleasantly surprised when I drop in on some of the high school bands that perform on Sunday afternoon. But it's good to have a plan, flawed though it may be.

Pamela Espeland has been coming to the Monterey Jazz Festival every year since 2005.