Accessibility links
At Monterey, Fast Footwork And East Bay Voices : A Blog Supreme Once a capitol city during Spanish and Mexican occupation, Monterey is now a jazz capital for three days every year. Here are four highlights from the 54th Monterey Jazz Festival so far, including a New Orleans revue and Bay Area standouts. 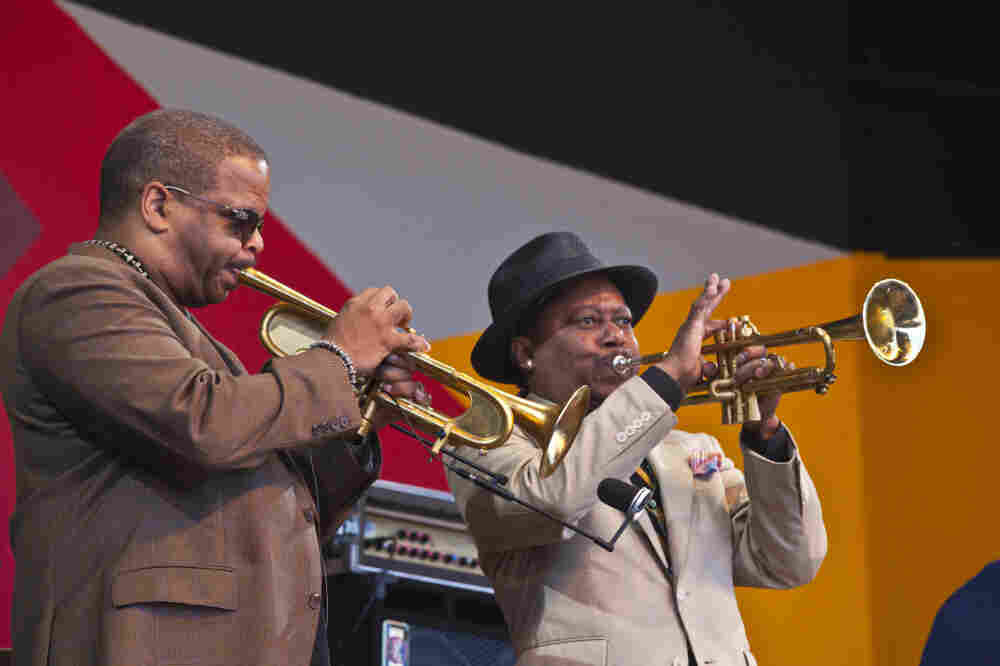 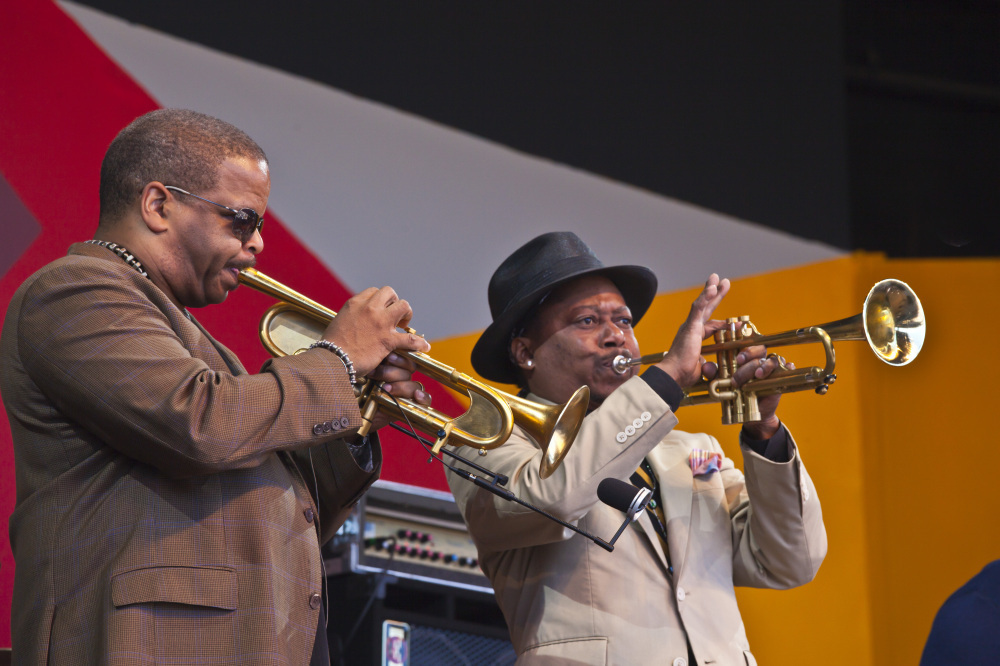 Terence Blanchard (left) and Kermit Ruffins perform in the An Afternoon In Treme revue at the 2011 Monterey Jazz Festival.

The town of Monterey, California, has reinvented itself several times. It was once a capital city when California was Spanish territory, and even when Mexico became independent. It was an important fishing town, as chronicled in the novels of John Steinbeck. And these days, tourism helps drive the local economy, with attractions like a world-famous aquarium, world-class golf clubs nearby like Pebble Beach, and the world's oldest continuously-running jazz festival.

I've been roaming the Monterey County Fairgrounds for the 54th annual Monterey Jazz Festival all weekend. So from the shadow of the Jimmy Lyons Stage, I spoke with Guy Raz, host of weekends on All Things Considered, about four of the shows I've been checking out.

An Afternoon In Treme

If you've seen any of HBO's Treme, you know that just about every other scene features prominent New Orleans musicians. So it was only a matter of time before we saw a traveling Treme-themed revue. A Night In Treme — An Afternoon In Treme, as it played out on Saturday — is essentially a diplomatic mission for New Orleans culture, with the city's musical canon featured prominently by a rotating cast of brass bands and guest soloists. Indeed, the city has no shortage of natural showmen who enjoy playing ambassador; the Saturday lineup featured Soul Rebels Brass Band, Kermit Ruffins, Terence Blanchard and Ivan Neville's Dumpstaphunk. And New Orleans native Wendell Pierce, who plays trombonist Antoine Batiste on Treme, was the ideal emcee to exhort the Arena crowd of several thousand to its feet. 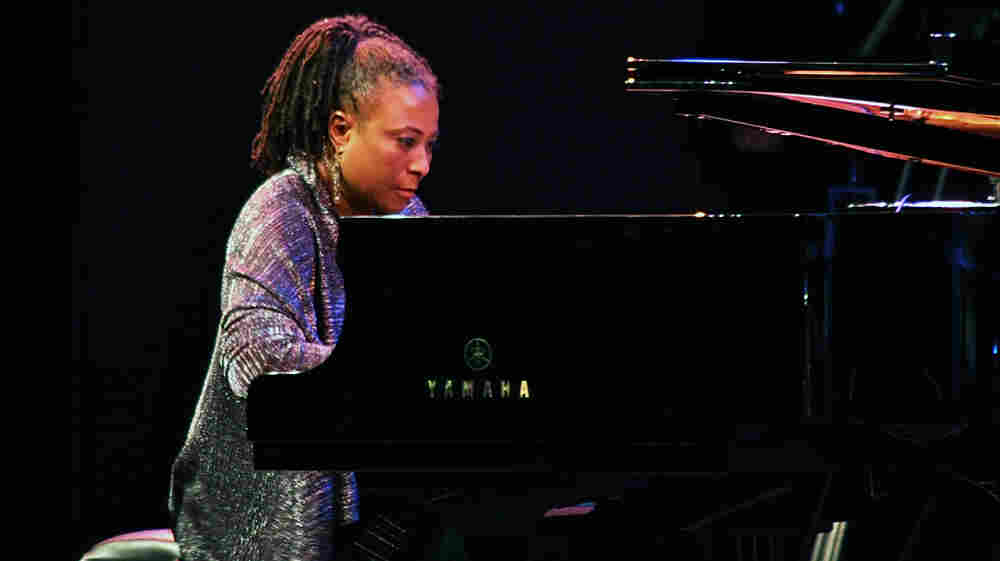 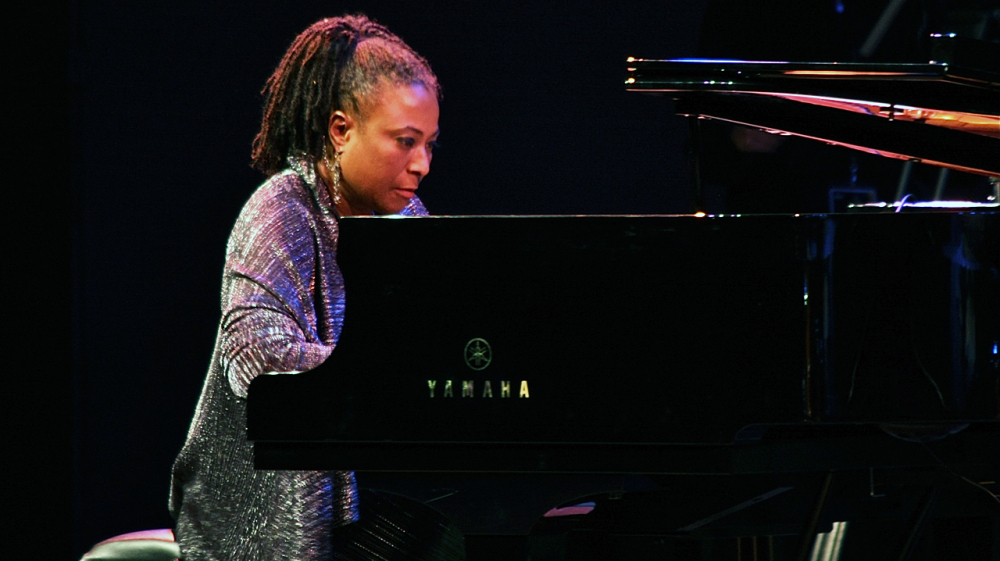 Speaking of jazz and dancing, the piano player Geri Allen has an engaging take on the connection therein. She's got a newish band called Timeline: a jazz piano trio, plus a tap dancer who effectively acts as a second percussionist. Allen grew up in the Detroit area, and she says she remembers artists who combined live jazz and dance when she was growing up. So she brought it back with this band. Timeline put out a live album last year, so the Monterey Jazz Festival not only invited her to play the Arena stage in 2011: It commissioned a new piece, a tribute to Sammy Davis, Jr. "The Dazzler" premiered on Saturday night to encouraging cheers, especially for hoofer Maurice Chestnut. 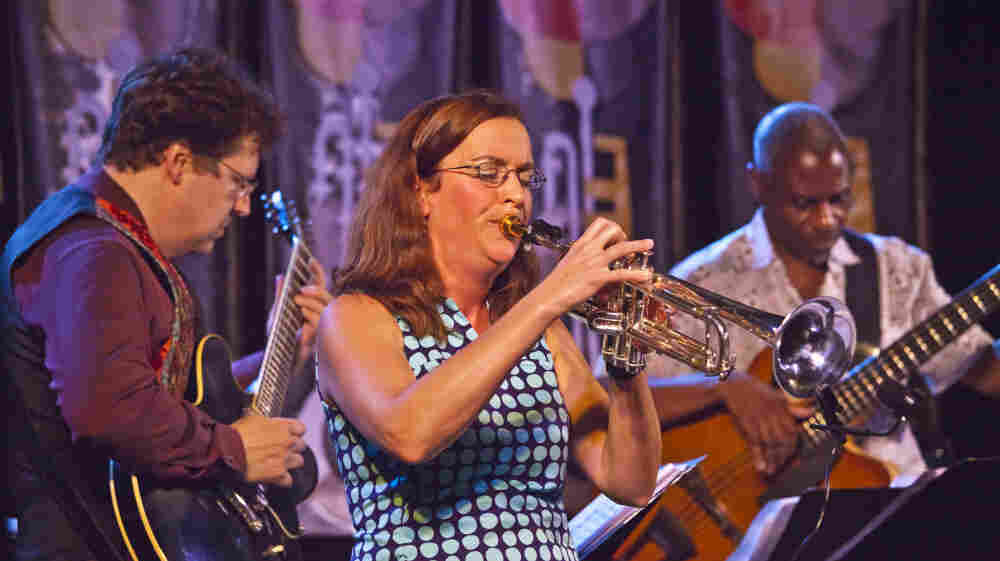 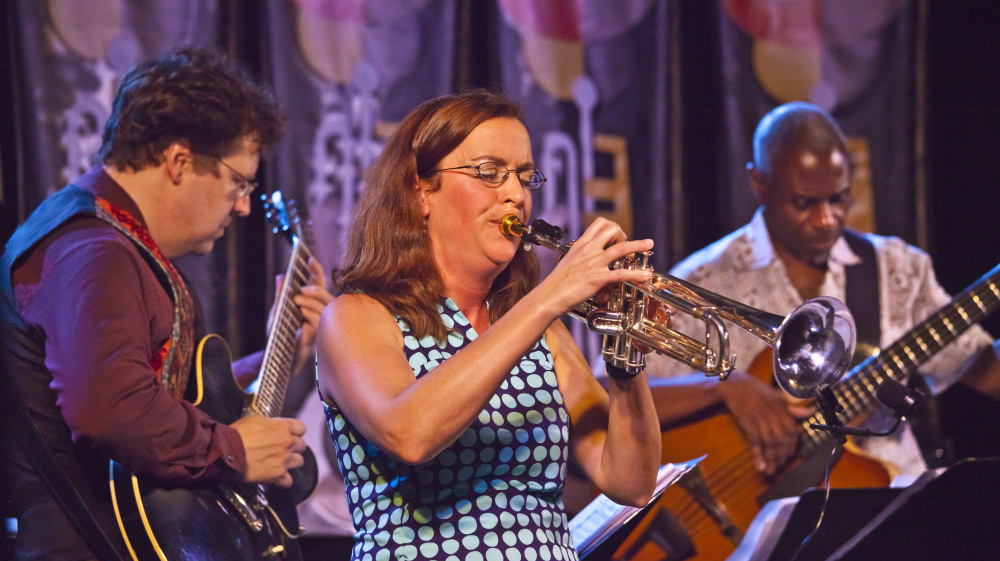 Any time you have a jazz festival anywhere, it's fun to explore the side stages and check out some bands you haven't heard of. For some at the Coffee House Gallery — the most intimate room at Monterey — trumpeter Sarah Wilson was a positive new discovery. Her tunes seem to leave room for her band to be creative and maybe even a little messy, even when they're not soloing. She sings, too, with a curious voice — it's not at all typical of jazz singers. It's somewhat plain, and doesn't sound trained, which you can take or leave in itself. I liked that it gave her a singer-songwriter, almost country-rock dimension in her composing. 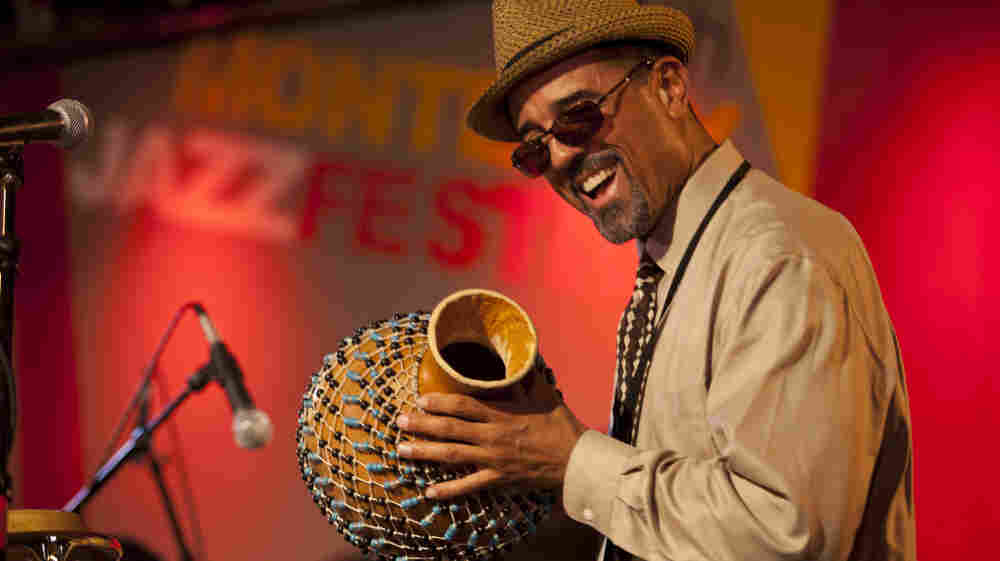 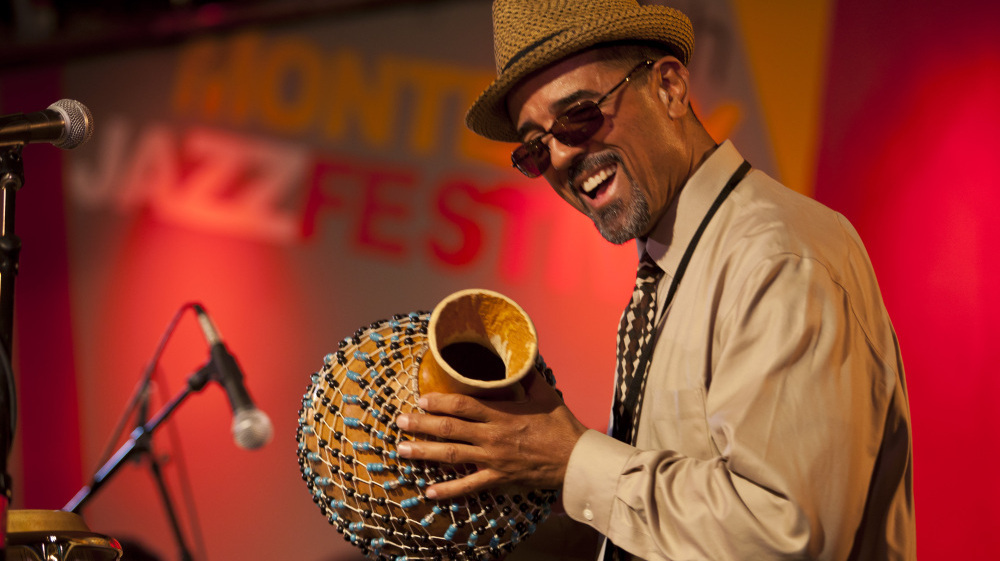 John Santos leads his sextet on Friday night of the 2011 Monterey Jazz Festival.

Being a California event, the Monterey Jazz Festival makes a special effort to feature musicians from the Central Coast and San Francisco Bay Area. Indeed, the aforementioned Sarah Wilson now lives in the East Bay — where hand percussionist John Santos has long been an anchor of the Latin jazz scene. For his sextet's Monterey show, Santos invited Puerto Rican rapper Rico Pabón to join in, reprising and expanding on his role on Santos' new Filosofía Caribeña, Vol. 1. Pabón grew up in a family of salsa musicians, so he found his way in here with rhythmic understanding and aggression. Sometimes these hip-hop-meets-jazz things are in general less than inspiring, but when they get it right, it gives literal voice to the social commentary that's often embedded within instrumental jazz.