Accessibility links
Monterey Jazz 2011: A Recap : A Blog Supreme A chat about Sonny Rollins, festival traditions and the other highlights of MJF 54. 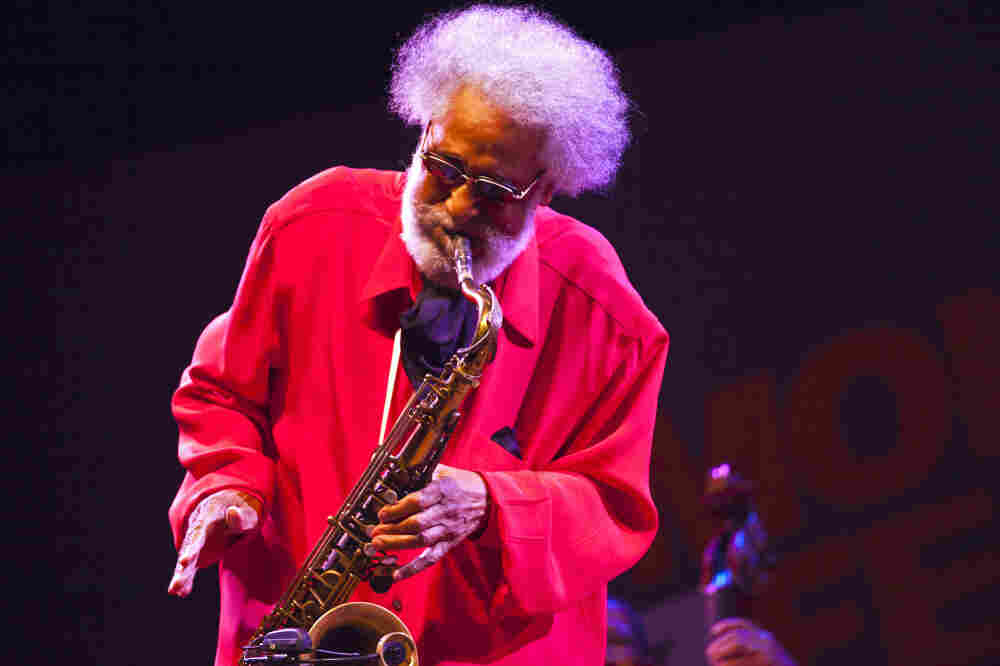 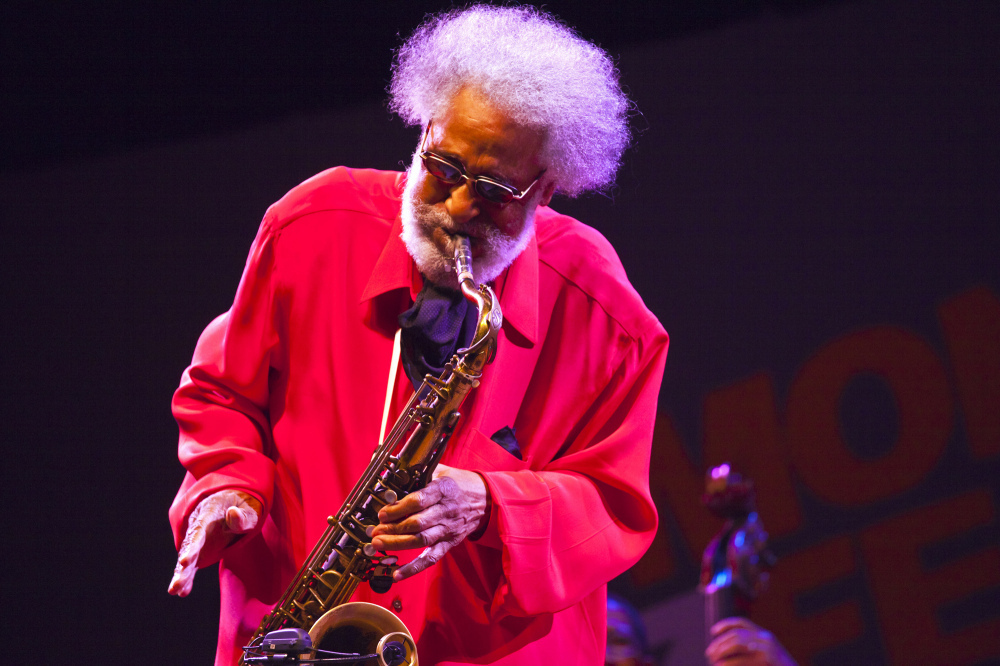 The 54th annual Monterey Jazz Festival is now in the books, a two-and-a-half day marathon of world-class jazz on the sunny Central Coast of California. In an effort to make sense of it all — and with no small amount of instant nostalgia — A Blog Supreme contributor Pamela Espeland and I sat down afterwards for this Instant Messenger conversation about what just happened.

Patrick Jarenwattananon: So, the last time we talked, we had both just caught a highly satisfying Sonny Rollins performance as a capstone to MJF 54. Or do you not agree?

Pamela Espeland: I totally agree. He was amazing. He played for nearly two solid hours — a half-hour longer than scheduled — and it seemed he could have gone on even longer. He even played a new composition, "Professor Paul," I think it was called. ("Professor P-something," anyway.) Powerful, powerful notes, dexterity, clarity, and he was on his feet the whole time.

You can't ignore his age, but only to marvel at it. I love how he ended with "See you next time! Long live Monterey!"

PE: He played the very first MJF in 1958. I can't imagine they put him in the Coffee House Gallery!

PJ: Well, there you go. He so thoroughly dominates the proceedings, you know? He'll pick a few simple tunes, and blow them to smithereens, improvising on the same eight-bar passage for like 15 minutes, exhausting every possibility, returning to the melody, going back for more.

PE: And never saying the same thing twice. And what a great band! A treat to see guitarist Peter Bernstein on stage with him. He fit right in. Kobie Watkins and Sammy Figueroa laid down this thick carpet of percussion, and Sonny danced on top of it. At one point near the end, he literally danced across the stage.

PJ: I do wonder, though — what if he picked sidemen who really pushed him, rather than him pushing them, you know? Like, Kobie Watkins keeps time with this unbelievably feathery touch, but I kept wishing he would go further places with his fills and solos. Same with Sammy and Peter — impeccable grasp of the basics, but ... OK, perhaps I'm complaining about a good thing.

PE: It's Sonny's show. I'm not complaining. But I know what you mean — maybe more like Roy Haynes? Everyone in his band has a lot of room to stretch out.

PJ: I do think that many of the other acts I saw last weekend had a lot more internal push and pull going on throughout the whole band, which is neither better nor worse. These days, jazz is so often dependent on fireworks at every station, you know? I think of things at Monterey like the Robert Glasper Experiment, anyone can shift the course of action to another setting at any time. Or the Scott Colley trio, where Chris Potter and Antonio Sanchez each took command. Or James Farm, where everybody writes tunes, and Joshua Redman purposefully doesn't dominate the proceedings.

PE: True. Maybe it's just a different tradition within the tradition? Personally, I find it more exciting when the energy/command moves around the band.

Glasper was a great way to start the festival, IMHO. A mix of classic and very modern. (At one point, he asked the crowd, "Any J Dilla fans here?" and about three people raised their hands.) Plus, Glasper is sexy, if I'm allowed to say so. He gets that slow groove going and you forget it's still sunny and you're sitting outdoors on a skinny metal bench.

PJ: I know a number of people who feel that same way about his music! Look for a new album from the Glasper Experiment soon. As for the Monterey crowd: It is, from what I gather, very much a Typical Jazz Festival Crowd In 2011.

PE: Hmm ... maybe typical for California, but not so typical for Iowa City or St. Paul? It's a more mixed crowd than I'm used to in Minnesota, that's for sure. I wonder what the median age is? I met one couple who's been coming for 30 years.

PJ: Yea, I guess that's pretty inexact on my part. How 'bout this: It's something of the core audience of jazz in 2011. The people who come here like this vibe, and follow this music enough to plan their whole vacations around it. Monterey (like, say, Newport) is a resort town on the coast, and admission for a day isn't exactly cheap, even if it's a good value. And apart from student musicians, the crowd isn't exactly young, in part for those reasons. 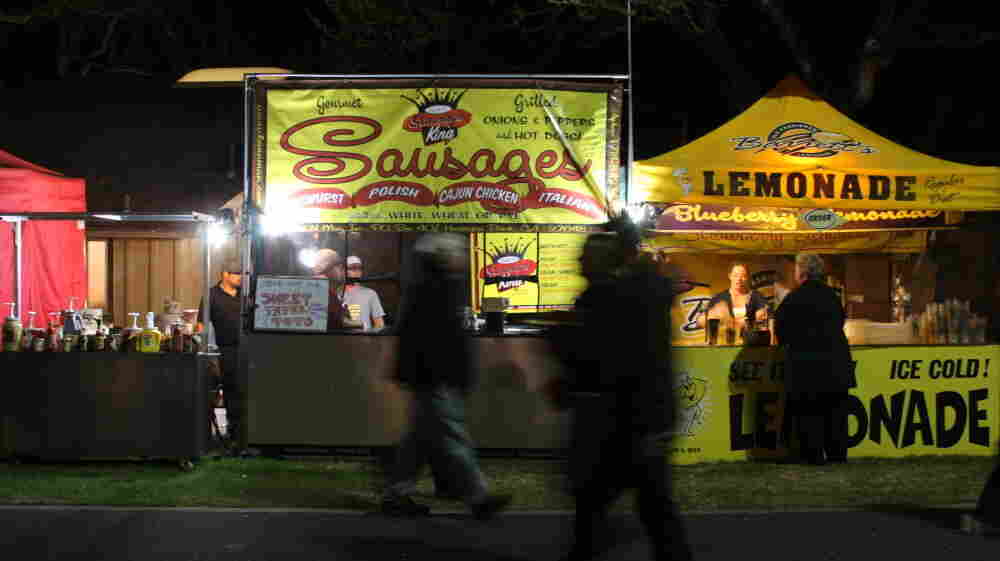 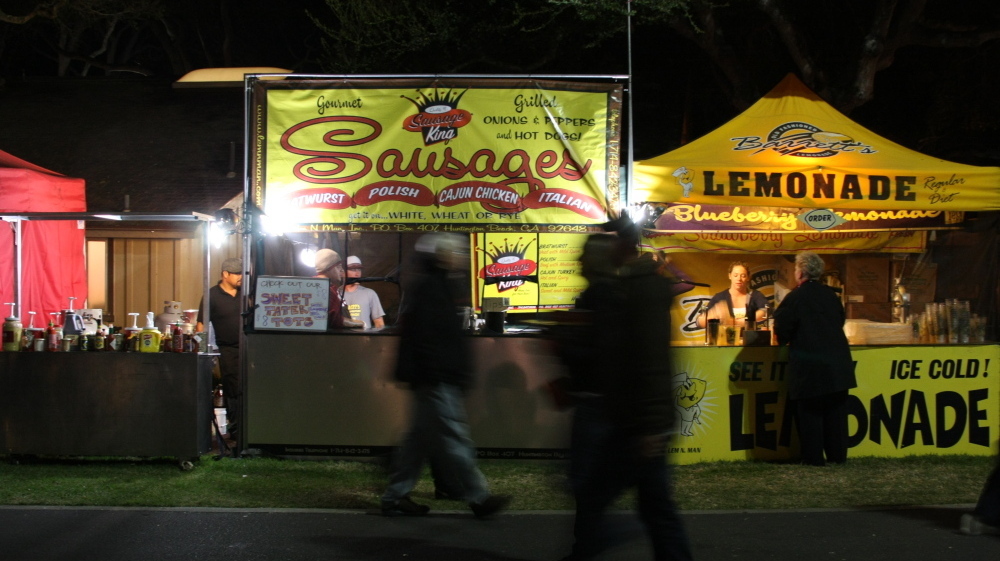 PE: And no part of it is free.

PJ: I did get the sense that a lot of the crowd are repeat customers, which isn't just a euphemism that they're older: There's a real loyalty to this whole experience. Not just gorging yourself on music, but being able to eat in the food court with Gerald Wilson or Poncho Sanchez.

PE: And once you enter the gate, you're in a different world. Before long, you start running into the same people as you walk the path between the different venues. It is nice how the artists — well, some of them — just hang out and drop in to hear each other play. Glasper came into the Night Club for some Benny Green.

PJ: That, for me, is one of the key things that happens at a good jazz festival: Musicians get to check each other out. When you set it up so that it's one big hang, as Monterey does, it benefits everyone.

PE: True. Hey, what did you think of the planes flying overhead? That's unique to Monterey, if I'm not mistaken. If you listen to older recordings from festival performances, you hear prop planes. Now they're jets.

PJ: I thought it was charming, really. Gives the place character. And despite the freshening-up paint job they give the place, it's hard to forget you're on a county fairgrounds, when vendor booths are in horse stalls, or some of the venues, before the people arrive anyway, give off that hotel conference center vibe.

PE: And the main venue is open-air, with a hay and sawdust floor. Pretty dusty, actually. A county fairgrounds where people walked around with iPhones checking the festival app. A great new feature, by the way — it made it very easy to figure out who was playing where and when.

PJ: I know I appreciated that app. You know, among the many traditions at the festival are the relationships it's built with certain musicians. Terence Blanchard, for instance — he was everywhere this year, and he wasn't even one of the three spotlight artists! 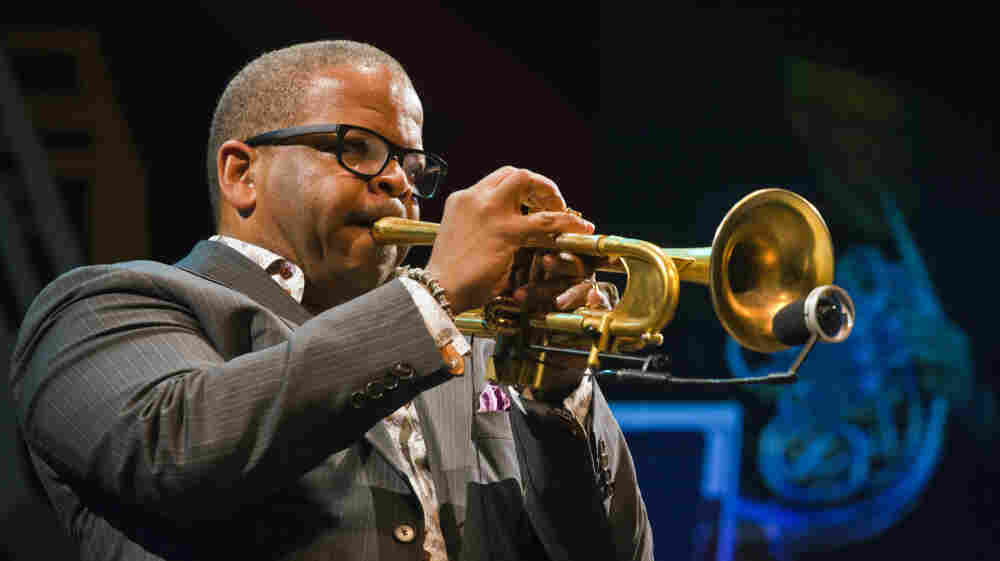 Terence Blanchard performs with the Vince Mendoza Orchestra in a tribute to the music of Miles Davis and Gil Evans. Craig Lovell/Monterey Jazz Festival hide caption 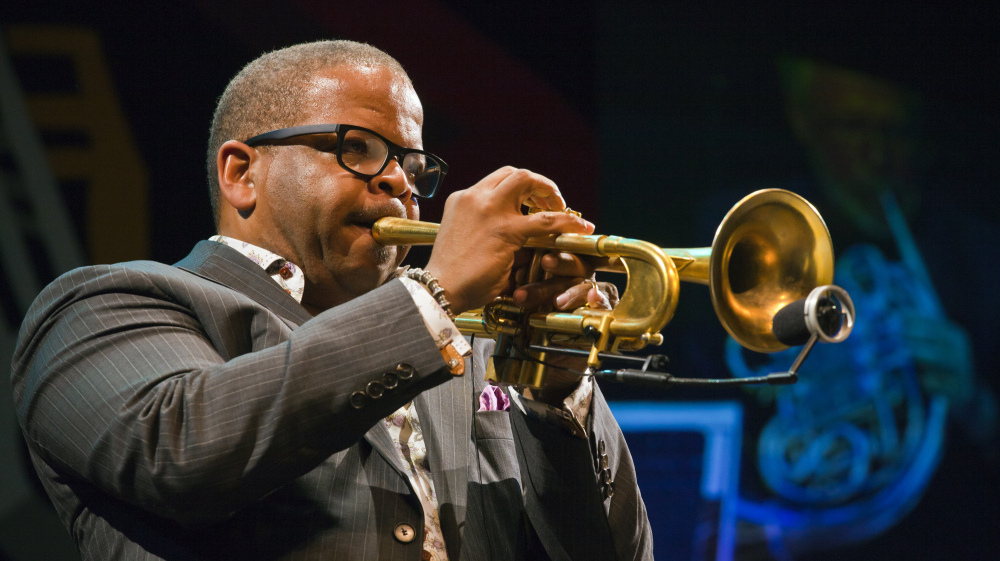 Terence Blanchard performs with the Vince Mendoza Orchestra in a tribute to the music of Miles Davis and Gil Evans.

PE: I've heard artists say that they really love this festival. I kind of expected to see Dave Brubeck, even though he wasn't on the program. Christian McBride was everywhere last year. (But wherever he is, he's everywhere. A high-energy guy.)

PJ: Terence played with Poncho Sanchez on the first night, in their jointly-led tribute to Chano Pozo (which I missed). He played a Miles Davis role on the closing night with a Vince Mendoza-led orchestra, reprising the classic charts of the Miles and Gil Evans performances. (I enjoyed that a good deal more than I thought I would — that repertory is so much "of the past" and of the studio that I never even really thought about it possibly ever being done live.) He subbed into the An Afternoon in Treme show. He sat in with Glasper.

More: Scott Colley said he's been coming here since he was 12, and a kid in L.A. Donny McCaslin is from nearby Santa Cruz, and grew up in the Next Generation Orchestra, the student big band. So did Joshua Redman, who played two sets with James Farm. Both Donny and James played with the Next Generation band on Sunday too.

PE: It was significant that Redman was this year's artist-in-residence — one of the Festival's own.

PJ: Artists, or at least a certain select community of them, have a connection with this place.

PE: You were just at Newport. Did that have a similar feeling?

PJ: Well, Newport is certainly one giant hang, and since that's a daytime-only event (as opposed to day and night) and only three stages (compared to eight at Monterey, though only five accommodate music consistently) all the performers are close by.

One similarity between here, and Newport: It's easy to miss good music. At times there are three or four world-class performances going on at once, which, if you're an obsessive type like me, occasionally annoying that you had to miss that one great show which everyone was talking about. But that's a marque of overall quality, it seems.

PE: Yes! And even if you plan out a schedule ahead of time, you get distracted or lured elsewhere by the siren song coming out of Dizzy's Den, for example. I honestly intended to get to every event on our game plan, but it just didn't happen. It helps make it a destination festival.

PJ: There's a similar sense of tradition at Newport too, a feeling that if you play Newport, you've been honored by the Jazz Gods, and not just because it's a well-paying gig. But there's not exactly that same sense of Complete Experience there. For one, it's smaller. There's not such a strong connection to nearby jazz communities, because the talent hub of New York is but four hours south. And the artist accommodations aren't all at the Hyatt down the street.

PE: Yes, having the Hyatt nearby is a bonus. I didn't go to the afterparties this year. What did you think? I heard: crowd crush.

PJ: I didn't make many of them either, but the hotel lobby is certainly the happening place — you can't go five minutes at any time of day without recognizing a musician.

PE: I wonder where Sonny stayed?

PJ: Good question, though I saw his band and his publicist in the lobby! OK, it's about time to wrap this up. So: What else has stuck in your craw from this weekend?

PE: Well, for me the festival is always about two things: seeing people I love (like Sonny) and making new discoveries. I will definitely keep my eyes and ears open for Helen Sung going forward, and Sarah Wilson, and I won't miss Raul Midón the next time he comes through Minneapolis.

Major disappointment: that Joey DeFrancesco didn't play longer on Sunday night. I counted on ending the night, and the festival, with him and Bobby Hutcherson, but because Sonny went over, that didn't happen. Also, my husband and I stopped for last-minute pizza and plantains on the way, so it was partly our fault.

PJ: Going to a jazz festival like this one is a place where even when you regret someting, you leave with no regrets.

I'm thinking of a moment from the DownBeat Blindfold Test on Saturday afternoon: One of the tracks Dan Ouellette tried to stump Donny McCaslin with (unsuccessfully) was Von Freeman's "Never Fear Jazz Is Here." That could have served as the theme for the weekend.

PJ: Right on. Pamela, it's been a pleasure working with you this year, and your husband John Whiting, source of several of our photographs here.

PE: Back at you, Patrick. We enjoyed it.

PJ: Until the next festival, as Sonny said, "long live Monterey."