Accessibility links
New Orleans Rhythm, Straight From The Source : A Blog Supreme From his porch in the Treme, the drummer can see where slaves congregated for Sunday drum circles, where Professor Longhair lived and where gospel choirs sing. No wonder he proudly steeps himself in his city's musical tradition. 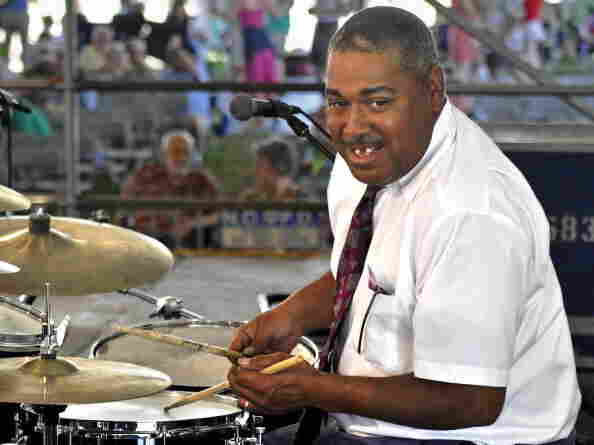 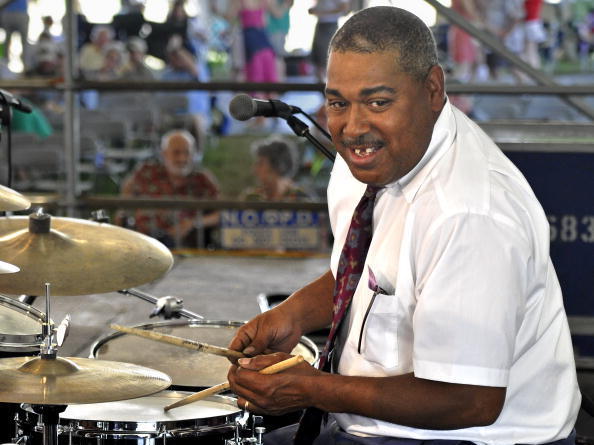 It is said of Shannon Powell that he's part of New Orleans' musical DNA — that he knows things only local drummers know.

He got his start as a teenager with the legendary banjo player and guitarist, Danny Barker. Powell has also toured with jazz vocalist Diana Krall and jazz musicians John Scofield and Marcus Roberts. Currently, he fronts a contemporary jazz band called Powell's Place, with Jason Marsalis, of the Marsalis dynasty, on vibes.

He switches to a seductive samba beat. "African rhythms, Brazilian rhythm, calypso," he says. "It's all related."

Perhaps that's the genius of Shannon Powell: It's all related.

They say drumming is an essential part of the language of New Orleans. The beat resides at the core of all New Orleans music — the jazz, the funk, the R&B, the funeral parades. Even beyond that, kids walk home from school with drumsticks beating on the sides of buildings or pounding on cardboard boxes during parades.

Powell does that, too. Like the early New Orleans drummers, he spends a lot of time off the skins, throwing in rimshots and hitting woodblocks and cowbells.

Like most New Orleans drummers, Powell is upstaged by trumpeters, clarinetists and trombonists. But he is one of the greatest drummers this musical city has ever produced.

Powell lives in the heart of one of the most famous musical precincts in America: the Treme, which gave its name to the HBO series. His house faces what's now called Louis Armstrong Park, where two centuries ago African slaves gathered every Sunday in Congo Square to drum and dance.

Around the corner was the Caldonia bar, where the great blues pianist and songwriter Professor Longhair lived in an apartment upstairs.

"I used to pass by there on my way going to school," Powell says from his front porch, where he is hanging out with his uncles. "I could hear Professor Longhair upstairs on the piano playing. And then, right in this block here before you get to the corner, there was a building — it was a house where Allan Toussaint had a studio and The Meters was in there recording."

Gospel music wafted out the door of the church next to Powell's house. Jazz funeral processions passed by on the street, on their way from the burial ground to the bar.

"See, I was surrounded by all this music," Powell says. "Like my uncle says, I'm part of the source." He indicates his uncle, Charlie Gabriel, a well-known clarinet and saxophone player, who agrees with his nephew: "He [is] the source. That's what he is."

In terms of style, Shannon Powell would place himself staunchly among the traditionalists — in food as well as music.

He's having lunch at Willie Mae's Scotch House in the Treme; its succulent, cayenne-battered fried chicken is considered some of the best on earth. He orders red beans, white-meat chicken and unsweetened tea. He seems to know everyone in the dining room.

The drummer is known as something of a curmudgeon when it comes to new New Orleans music. He complains about everybody from Trombone Shorty to the Rebirth Brass Band. The latter just won its first Grammy, for Best Regional Roots Album.

"They playin' one style of music and callin' it something else," Powell says. "Don't say we playin' traditional New Orleans music if you playin' rock 'n' roll, that's what I'm sayin.'"

"He's not the only person in the history of New Orleans jazz that has said there needs to be the continuity of the tradition," says Nick Spitzer, a folklorist, New Orleans resident and host of the public radio program American Routes. "Continuity is wonderful, but to keep a tradition alive you have to create new songs, sounds, styles.

"I would say Shannon is right there, at the center of the rear guard, kicking the bass, playing the snare and pushing everybody forward," Spitzer adds. "That's a good role for Shannon to play. He's good at it. He does it with a smile on his face."

The Sound Of Humidity

The house is packed at Preservation Hall in the French Quarter, the cathedral of traditional jazz in New Orleans. Tourists have filled every square inch on the creaky old wooden floor.

Powell sits at his drum kit, a great beneficent presence with his black beret and gap-tooth grin. He leads the band here every Tuesday night.

Though Powell plays every style of New Orleans music, this is where he says he feels most at home. He's an old-fashioned showman on the drums, like Louie Bellson or Buddy Rich. Powell calls the tunes, cracks the jokes, picks the soloists and mesmerizes the crowd — especially when he picks up a tambourine and testifies on it the way he learned from the sanctified church ladies.

"Shannon Powell, what can I say, man, he is the embodiment of every great drummer that I love," says Dave Torkanowsky, a renowned local jazz pianist who has played with Powell for 25 years.

"He is the living history. He's the last of his kind. This town is the beachhead of African culture in America, and he is a direct uncut descendant from that. I mean, the humidity is in his playing."

Shannon Powell will be playing at this year's New Orleans Jazz and Heritage Festival in late April, and his band, Powell's Place, has a new album coming out soon. If you listen carefully, you can hear the humidity.