Accessibility links
The World-Class Jazz Club Run By Volunteers : A Blog Supreme The Vortex in London is a 100-person venue which recently hosted the Vijay Iyer Trio and the BBC. It's been an engine of economic growth for its community and is embraced by musicians. It's all the more remarkable considering no staff are paid. 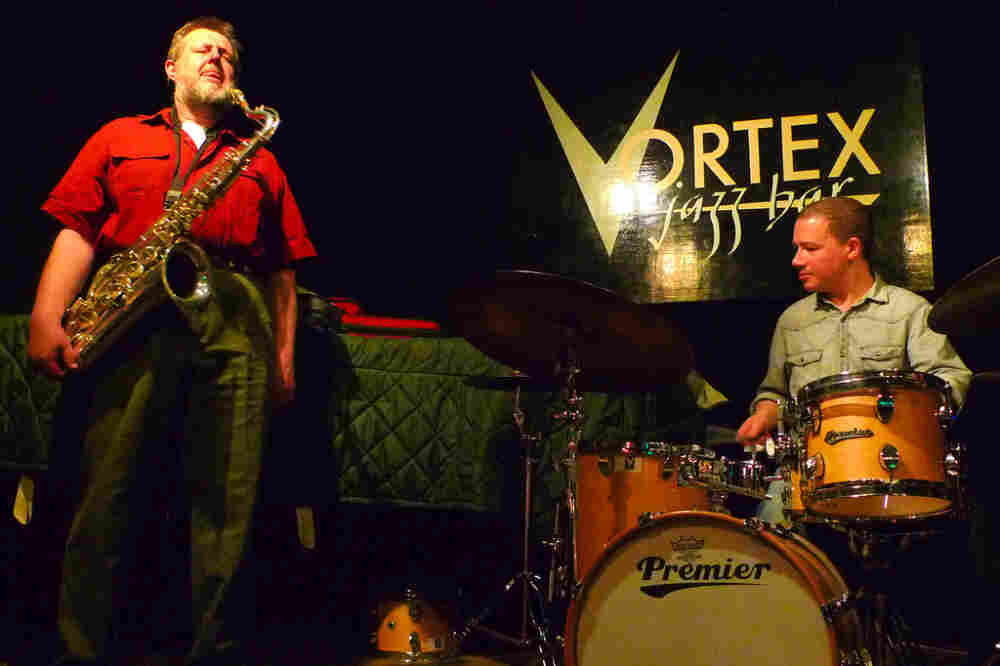 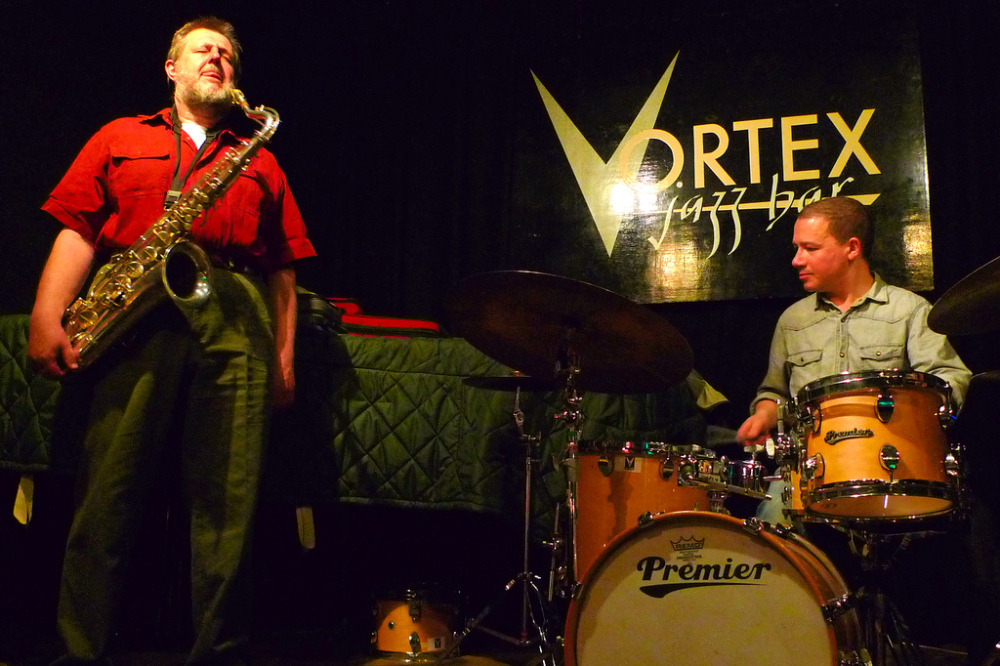 Saxophonist Paul Dunmall and drummer Mark Sanders perform (with guitarist Hasse Poulsen, off camera) at The Vortex in London.

As an acclaimed pianist and composer, Vijay Iyer is able to perform his music in concert halls and jazz clubs around the world. But few venues are quite like the one he played May 1-2 of this year.

Yesterday the BBC's Jazz on 3 posted a live recording of a new song by the Vijay Iyer Trio — too new, even, for the band's 2012 album Accelerando. The song is called "Hood":

"Hood" is a tribute to the Detroit techno pioneer Robert Hood, and I think you'll agree it's an incredible thing for an acoustic piano trio to do. (Iyer's trio has actually been performing the song for a little while, as it did when NPR Music recorded a full concert in January.) If you listen carefully, you'll notice the applause is that of an intimate room, not a cavernous performing arts center or theater. Indeed, the credits reveal: "Recorded at The Vortex, London on 1 May 2012."

Being a guy who helps to record jazz concerts, I wondered: What kind of club is The Vortex that the Vijay Iyer Trio would play there, and that the BBC would record it? It's certainly not the first Vortex recording for the BBC, I gather, so I searched for more about the venue.

I found that The Vortex is a lot like many small jazz clubs — except nobody is paid to work there. Check out this short documentary video:

The Vortex is a small non-profit venue in Dalston, London, with a capacity of around 100 people. (That's even smaller than the hallowed Village Vanguard in New York, capacity 123.) It specializes in "left-field" music, as you can tell from the soundtrack. It was founded in the northeast London neighborhood of Stoke Newington, where it helped to develop the area into a thriving commercial district. After it was forced out, community support helped the club move to nearby Dalston in 2005. From the outside (see around 3:00) it looks like a glass enclosure jutting out from the Dalston Culture House. Located literally around the corner is the Dalston Kingsland rail stop.

It's all the more remarkable, then, that it's primarily a volunteer operation. That fact is the first thing the documentary hits you with, and it's also prominent on the "about" section of the club's website. All staff, including sound guys and directors, are volunteers.

This scheme actually makes for a rather effective business plan. It allows for both quality and quantity: With reduced overhead, the club can pay a (presumably) reasonable amount to world-class bands like the Vijay Iyer Trio, but also host music seven nights a week, including local artists. Amazingly, this is done while receiving no "regular source of public funding" and keeping admission prices "reasonable, generally in the range of £8 to £15" ($13 to $24).

It seems as if the volunteer focus also helps to develop a good vibe — a sense of community and shared ownership. Musicians have a safe place to play without anyone trying to rip them off, and staffers feel invested in running the operation. Certainly, it wouldn't work out for every jazz setting, but it's certainly worth noting that it seems to work here.

As for Iyer, here's a quote from a review of the Vortex show (actually a two-night residency) on the LondonJazz blog: "Iyer said how much they enjoyed playing the Vortex — perhaps one of the few places left where undivided audience attention is guaranteed — and said that they'd love to return, 'if we are invited'."