Accessibility links
Ahmad Jamal: Still Fearless And Innovative At 82 : A Blog Supreme He revolutionized and continues to explore the jazz piano trio. Hear five selections from his staggering and ever-expanding body of small-group work. 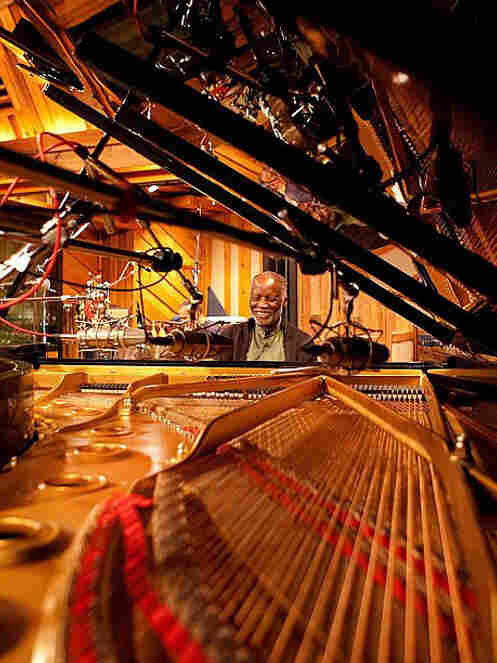 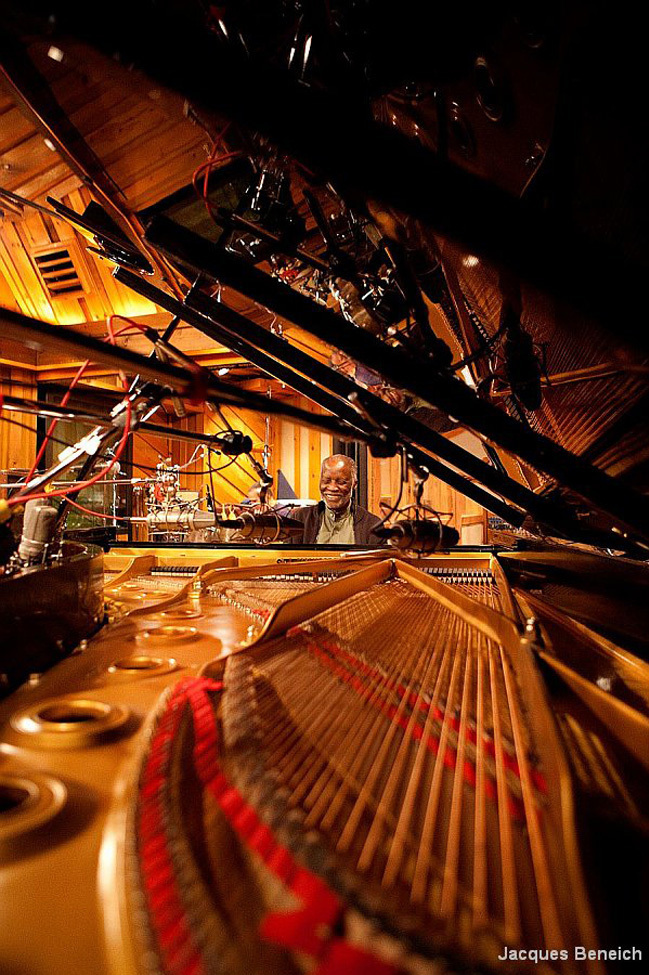 Ahmad Jamal at the grand piano during the Blue Moon sessions.

Today jazz pianist Ahmad Jamal celebrates his 82nd birthday, presumably near Montauban, France, where he will play a gig tomorrow. In fact, he'll spend most of the month in France, The Netherlands, Greece, Switzerland and Turkey doing what he does best: pouring himself into his enchanting music.

Since the early 1950s, Jamal has been a driving force in jazz, profoundly influencing a number of musicians including Miles Davis and John Coltrane. Jamal's earliest recording sessions were with piano, bass and guitar; he soon replaced the guitar with drums. In each of these formats, Jamal's approach was groundbreaking. In an essay on Jamal, the great critic Stanley Crouch wrote, "Through the use of space and changes of rhythm and tempo, Jamal invented a group sound that had all the surprise and dynamic variation of an imaginatively imagined big band."

Though Jamal occasionally works with larger groups, string sections and orchestras, it is the jazz piano trio format that he revolutionized and continues to explore. As a birthday salute to one of the true masters of jazz, here are five selections from Ahmad Jamal's staggering and ever-expanding body of small-group work.

Get To Know Ahmad Jamal 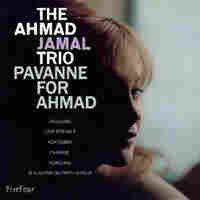 "Pavanne," with its simple and charming melody, is one of Jamal's earliest recordings and one of his most influential. The tempo of Jamal's arrangement makes the song almost jaunty, and the interplay with Ray Crawford (guitar) and Israel Crosby (bass) is precise yet loose. This recording inspired Miles Davis' composition "So What" and John Coltrane's "Impressions" — listen closely to "Pavanne" and you may be able to detect its influence on those two classic compositions. And remember that when Jamal was doing this, he was only in his early 20s. 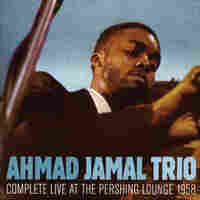 In 1956, Jamal decided to replace the guitarist in his trio with a drummer. In 1958, Jamal, Crosby and drummer Vernel Fournier recorded at a Chicago hotel what would become one of the most successful albums in the history of jazz: Live At the Pershing. An edited version of the eight-minute "Poinciana" you'll hear here became a hit record and was on jukeboxes and radio stations all over America. In "Poinciana," you can hear very clearly the lightness of Jamal's touch and his wonderful use of space — two of the many qualities of his music that Miles Davis prized and sought to emulate. 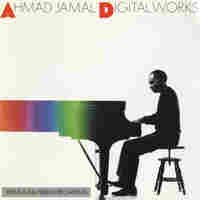 Though Jamal is closely associated with the classic jazz trio configuration of piano, acoustic bass and drums, he often adds a second percussionist to his work and will sometimes employ electric bass. He was also one of the first jazz musicians to make the move from analog to digital recording. CDs came on the market in 1982, and in 1985, Jamal released Digital Works on the format — basically a vehicle for revisiting and re-imagine some of his earlier work. "One" is a piece of music he's recorded a number of times. This version features drummer Herlin Riley, electric bassist Larry Ball and percussionist Iraj Lashkaryl. 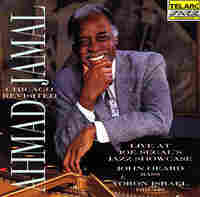 Every good set of jazz tunes includes a ballad, and Jamal is a ballad master. Here he is in another live performance, this time from the 1980s. John Heard plays bass and Yoron Israel is the drummer. 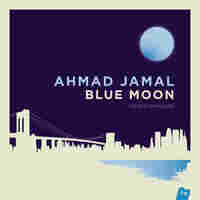 Blue Moon is Jamal's latest album, recorded when he was 81. One listen to "Autumn Rain" makes it abundantly clear that he is still in top form, more impressionistic and even more fearless than he was in the early days of his career. Ever evolving and always engaging, Jamal is a jazz icon who refuses to rest upon his laurels. He is accompanied here by Riley, bassist Reginald Veal and percussionist Manolo Badrena.