Accessibility links
Art Imitates Life, And Vice Versa: Christian Scott And 'Treme' : A Blog Supreme Fans of the trumpeter and bandleader may know that he has appeared in a few movies. But when it comes to the HBO program about his hometown, the lines between real life and acting begin to blur — especially when it comes to his new album. 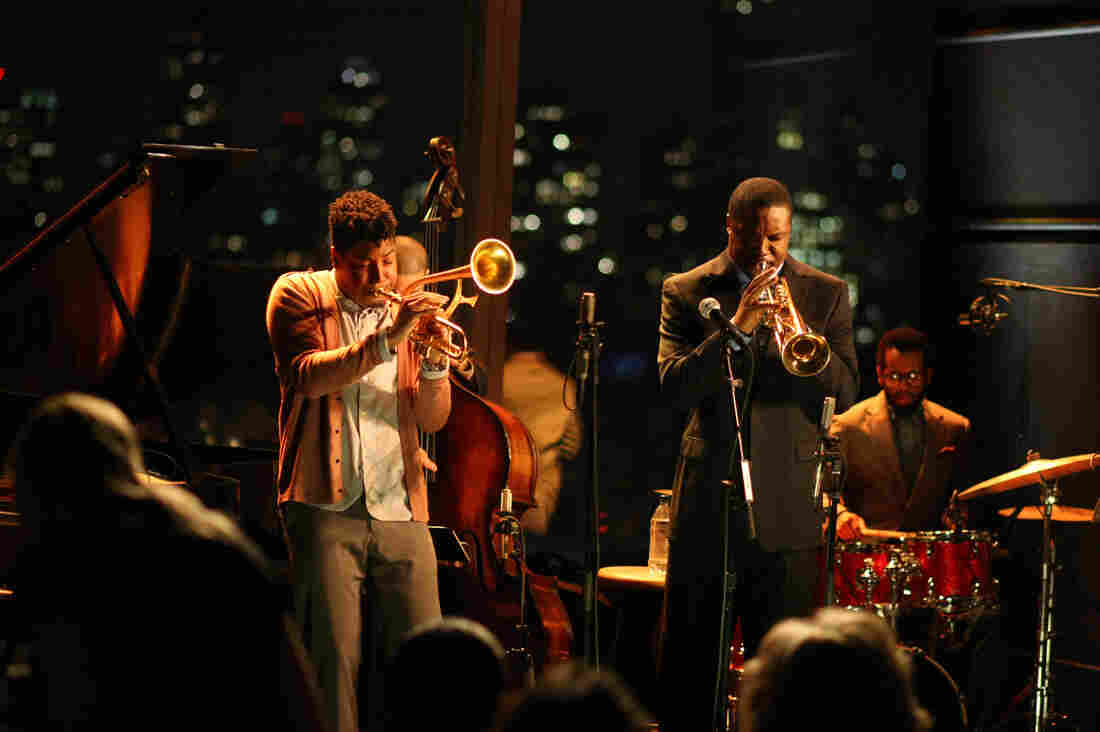 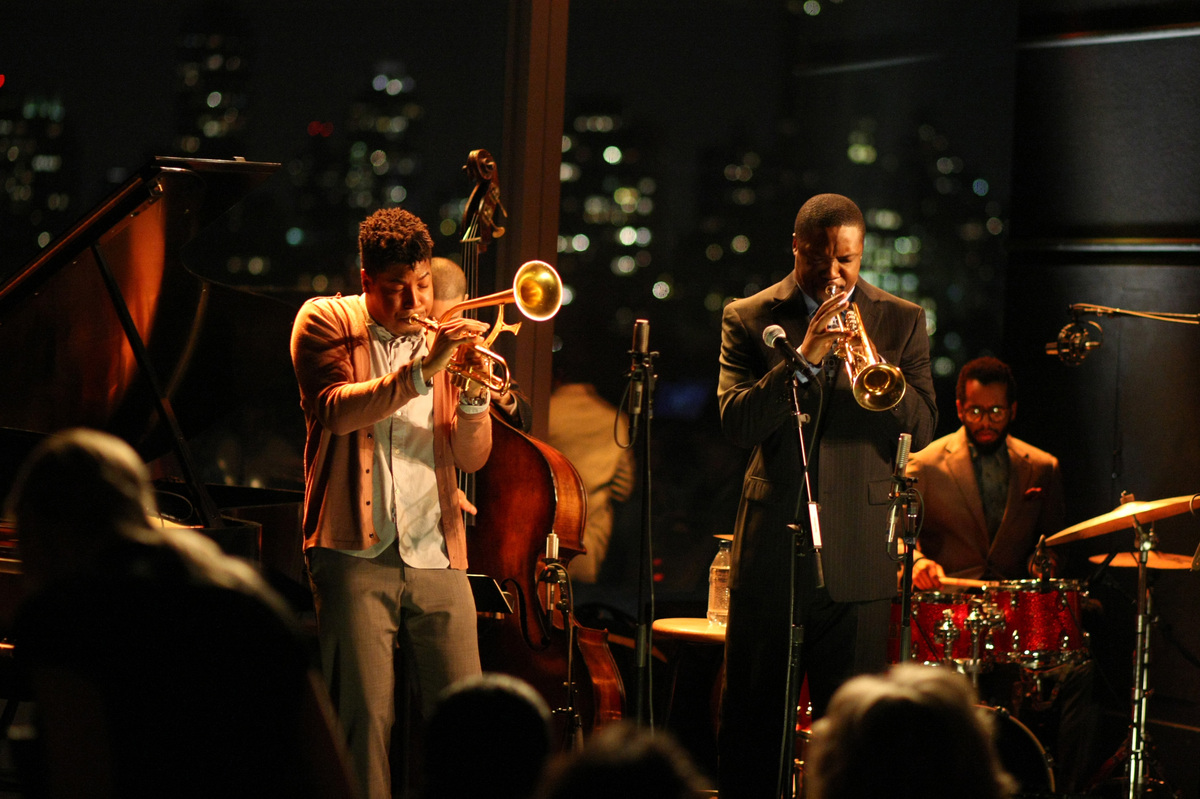 Fans of the trumpeter and bandleader Christian Scott may know that he's done a little acting, appearing briefly in feature films like Rachel Getting Married and Leatherheads. Fans of the HBO program Treme know that he not only appears on camera: His life story partially inspired the character Delmond Lambreaux, a jazz trumpeter who has left New Orleans to pursue a career in New York. In fact, in episode one of season two, the character Delmond and the real Scott appeared on screen together, "performing" in New York City.

But if art imitated life, then life might just be imitating art in return. With the impending release of his new album Christian aTunde Adjuah, which you can currently hear via NPR Music's First Listen series, Scott's actual career now appears to mirror that of his fictional counterpart.

It's far from an exact parallel, of course. But here are a few of the details. (Spoiler alert applies for those who haven't seen the show.) 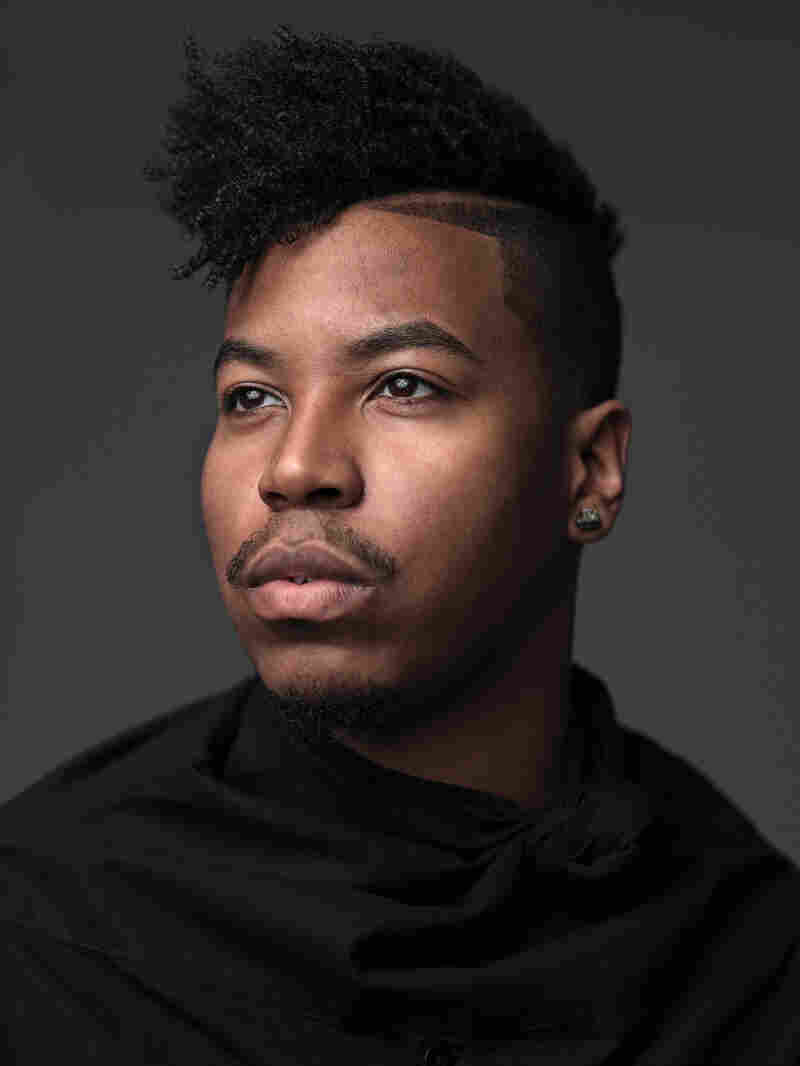 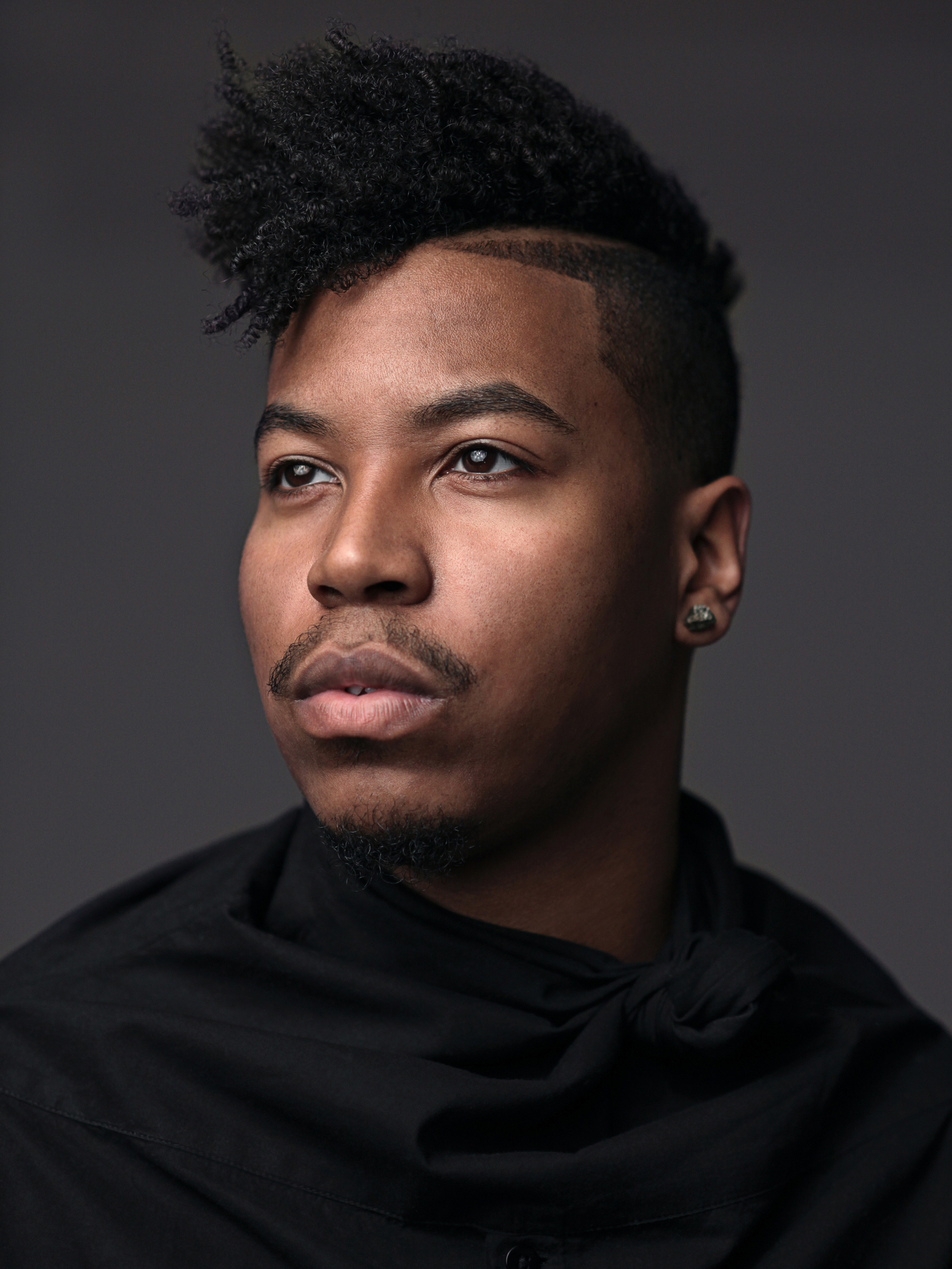 Delphine Diallo/Courtesy of the artist

Christian Scott now lives in Harlem, but is from a musical family in New Orleans. His grandfather, Donald Harrison Sr., founded the real-life Guardians of the Flame Indian tribe; his uncle, Donald Harrison Jr., took over as Big Chief of the Guardians of the Flame, and is a noted saxophonist. Scott is clearly talented; he was drafted into his uncle's band as a teenager, assuring that he has a strong command of the jazz tradition. But compared against the New Orleans canon, he has insisted on his own distinctly modern artistic direction, one which "stretches" the conventions of jazz.

Delmond Lambreaux, the Treme character played by actor Rob Brown, is the son of Albert Lambreaux (Clarke Peters), a headstrong Mardi Gras Indian Chief (and jazz aficionado) who attempts to rebuild his life in New Orleans after Hurricane Katrina. Delmond has made his name on a modern, hard-bop style, although his New Orleans upbringing has versed him in older jazz styles too. Especially in season two, he becomes obsessed with building a bridge to his musical forbears. So he decides to make a Mardi-Gras-Indian-influenced album, inviting his father to sing and chant on the record, and even starts weaving a Mardi Gras Indian decoration.

On Christian aTunde Adjuah, Scott is clearly acknowledging his musical and personal histories. Unlike Delmond's fictional album, Scott's record doesn't factor in Indian chants or second-line parade beats, but the philosophical direction is messaged strongly. On the album cover, he poses in his Guardians of the Flame Spy Boy costume. He has written tunes called "New New Orleans (King Adjuah Stomp)" and "Spy Boy/Flag Boy." In the liner notes, Scott even writes about a confrontation between him and his disapproving musical elders: "Their critique helped me understand that a firm knowledge of what came before is equally as important as an unflinching willingness to seek new landscapes and opportunities."

There's a curious chronology here. The Treme season two finale aired July 3, 2011. That means the show was taped well before Scott recorded the album, starting July 20, 2011. I don't know if or when he communicated his ideas to the writers of Treme, but it is curious that both the character arc and the real life arc appear to be evolving in parallel.

In 2010, not long after the first two episodes aired, he aired mixed feelings about Treme to LAist. But the Delmond character and the show have developed greatly since then, and clearly Scott was willing to appear on the show by the time season two rolled around.

In any event, here's another image. This one is from the last episode of Treme so far: 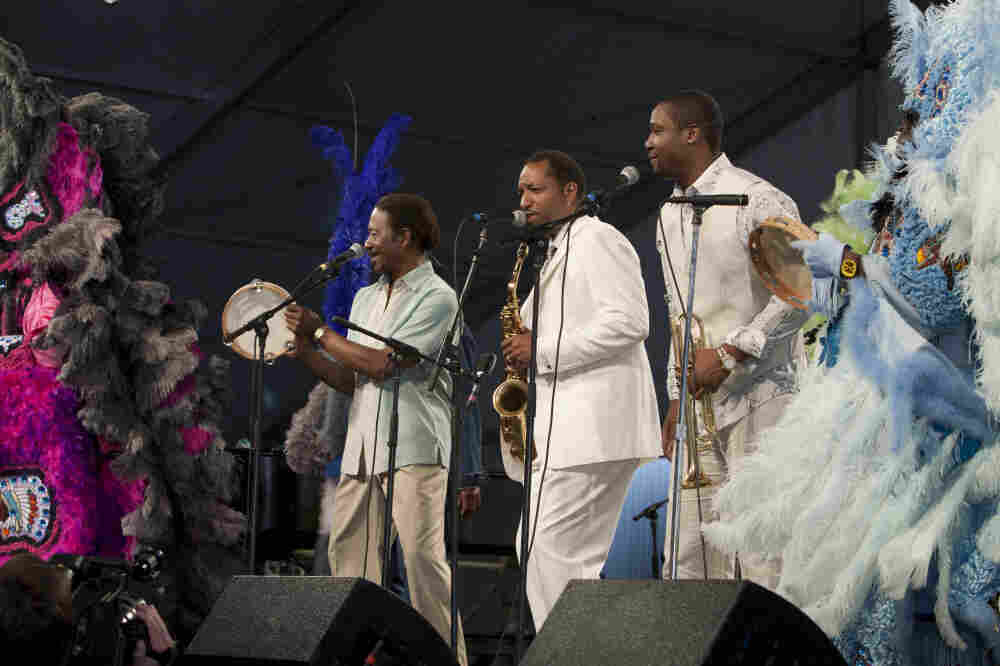 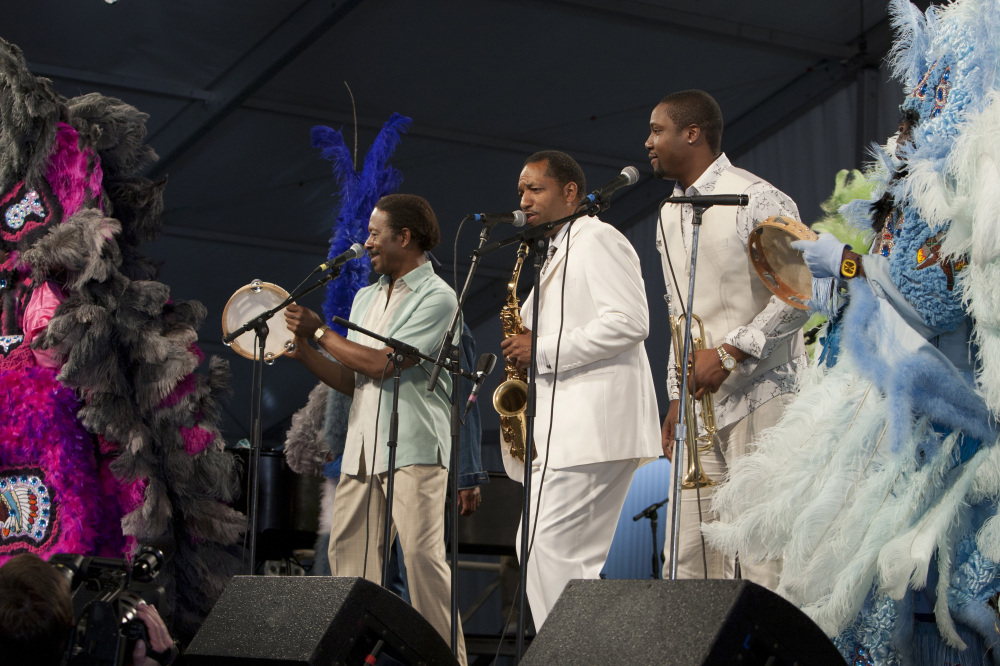 It's the fictional Delmond, his fictional father, and the real-life Donald Harrison Jr. (playing himself) on stage. Harrison Jr. also lent part of his life story to the characters Delmond (he too once left New Orleans for a jazz career in New York) and Albert Lambreaux (again, he became a Big Chief, and is uncle/musical mentor to Christian Scott). So this scene is another example of fictional characters interacting with a real person who inspired them.

We can expect to continue to see art imitating life, and perhaps vice versa, when the next season starts in September.