Accessibility links
Cannonball Adderley: 5 Songs From A Joyous Soul : A Blog Supreme With a sweetly ferocious style, the alto saxophonist bridged the post-bop of the 1950s and '60s to the jazz fusion of the '70s and beyond. For the anniversary of his birth, hear some of the recordings which made him jazz royalty. 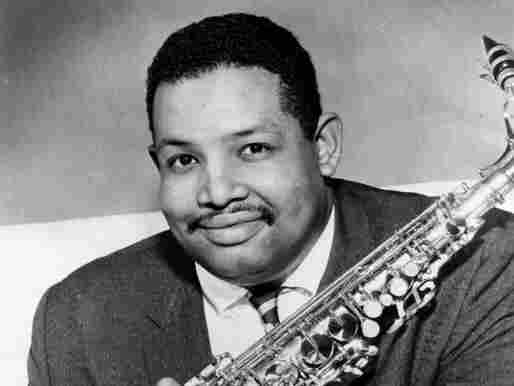 Two words best encapsulate the music of alto saxophonist Julian "Cannonball" Adderley: "joy" and "soul." It's those two qualities that helped make it possible for Cannonball's music to bridge the post-bop of the 1950s and '60s and the jazz fusion of the '70s and beyond.

As well as leading his own groups, he was part of the group Miles Davis used to record the landmark Kind of Blue. Later, as Adderley perfected his own blend of bebop, funk, soul and R&B, he worked with future members of Weather Report like percussionist Dom Um Romao and keyboard player Joe Zawinul. Through it all, he also worked almost constantly with his brother, trumpeter and composer Nat Adderley.

This Saturday marks the 84th anniversary of Cannonball's birth. Here are five songs which capture his joy and soul.

When Cannonball Adderley arrived in New York in 1955, not long after the death of Charlie Parker, he was an immediate sensation. During that summer, he recorded material for three albums. "Cannonball" comes from a session he did with another up-and-coming jazz powerhouse, composer-arranger Quincy Jones. This song features a Cannonball solo which announces his arrival on the scene, but brother Nat and pianist John Williams do some fine soloing, as well. They're joined by J.J. Johnson (trombone), Cecil Payne (baritone sax), Paul Chambers (bass) and Kenny Clarke (drums). Even in this illustrious company, Cannonball soars with the freedom of a young bird on its first flight.

By 1960, Cannonball was firmly in control of the soul-jazz sound that would define him, leading a quintet that featured his brother Nat on trumpet, as well as Bobby Timmons (piano), Sam Jones (bass) and Louis Hayes (drums). Though Cannonball did a fair amount of composing, he made a point of working with musicians who were also superior songwriters. Timmons contributed several classics to the quintet's repertoire, as did Nat. "Work Song," now firmly embedded in the jazz canon, is Nat's composition.

This song is the best example of Cannonball's habit of hiring band members who were also good composers. "Mercy, Mercy, Mercy" was written by Adderley's pianist at the time, Joe Zawinul, and is one of the few original jazz compositions to also become a popular hit record. The Adderley Quintet recorded it in '66; it reached the top of the Billboard charts in early '67. Cannonball's earlier work with Miles Davis on Kind of Blue helped him gain the attention of jazz lovers, but "Mercy, Mercy, Mercy" is the song that introduced him to the rest of the world. Along with Nat and Joe Zawinul, this group also featured drummer Roy McCurdy and bassist Victor Gaskin.

The success of Mercy, Mercy, Mercy didn't seem to go to Adderley's head. Even though he continued to experiment with funk and R&B elements in his music, he never lost his love for playing bebop or jazz standards, as evidenced by this lovely version of Hoagy Carmichael's "Stardust." You get a clear sense in this live recording that Adderley is having a great time with Zawinul.

Although Cannonball did the majority of his recording and touring with his quintet, he also enjoyed collaborating on projects with other artists, as well. In this session from 1962, we hear his joyous alto sax in a Brazilian setting, with a group featuring pianist Sergio Mendes and future Weather Report drummer Dom Um Romao.