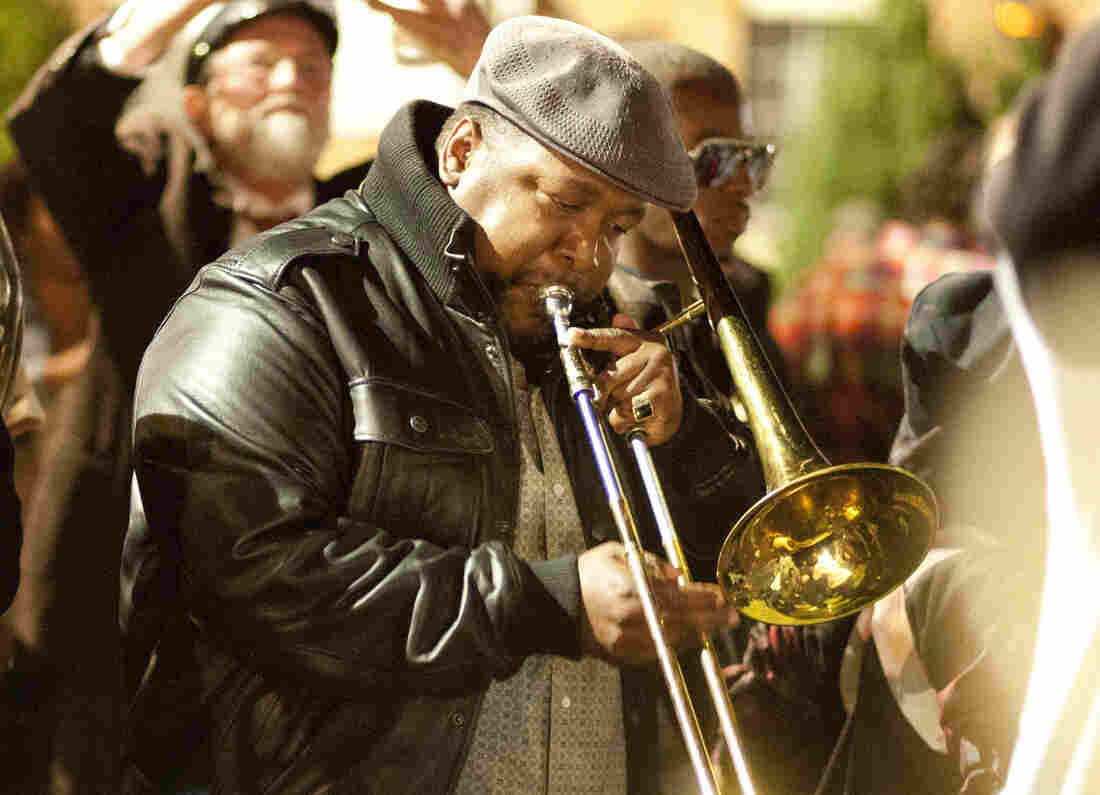 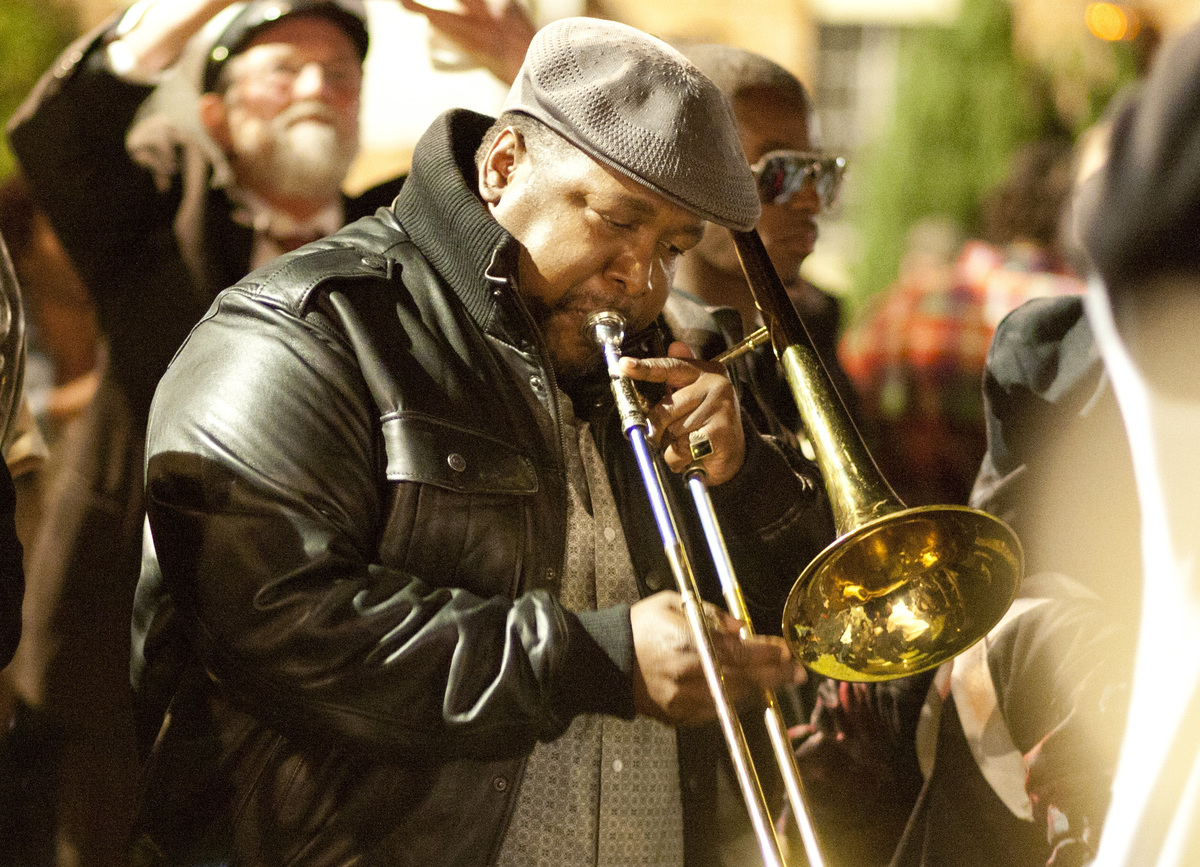 If you've been watching the HBO series Treme with us, welcome back.

If you're new here, welcome in the first place. WBGO's Josh Jackson, a New Orleans native, and I have been watching the music-saturated program set in post-Katrina New Orleans for two years now. After every episode, we try to establish some context for the many musical references and live performances the show features.

As the show enters its third season, two years after Hurricane Katrina, the story remains much the same: Cultural survival is at stake. Here's the email dialogue Josh and I had.

Patrick Jarenwattananon: The episode starts with an impromptu memorial in the Treme for a musician named Kerwin James. Of course it was broken up by police — but we heard the standby "I'll Fly Away."

Josh Jackson: It's October 2007. We're two years into the post-Katrina history of New Orleans, and real life events are filtering into the dramatic narrative immediately. Kerwin James, a tuba player for the New Birth Brass Band, has recently died from complications of a stroke he suffered the previous year. Musicians (including Kerwin's brother, tuba player Philip Frazier) come together to pay tribute to a fallen soldier, and the social function of music happens in Treme as it has in New Orleans since the 19th century.

This time, however, law enforcement intervenes, citing anonymous "neighbor" complaints and lack of a permit to assemble in such a manner. We've seen this chilling effect on social aid and pleasure club parades (aka second lines) as well as the Mardi Gras Indian tribe gatherings. The implication is that African-American culture is under siege at its fountainhead.

In addition to the defiant vocal version of "I'll Fly Away," we hear "Just A Little While To Stay Here" the following day (at the end of the episode) when the NOPD allows, even escorts, a parade scheduled to replace the first unfortunate event.

PJ: The big-name musician arrested was Glen David Andrews. We've seen him before in the show — he's of a Treme musical family.

JJ: Yes, trombonist Glen David Andrews is part of family that includes more brass players — cousin James Andrews and his younger brother, Troy "Trombone Shorty" Andrews. There are more familial ties to other brass bands — Dirty Dozen, Hot 8 and Baby Boyz. Rhythm and blues singer Jessie Hill was an elder in the family, and there are further associations with the Nelson family, including Walter "Papoose" Nelson and Lawrence "Prince La La" Nelson. If you were to make a proper family tree, you'd even find traces of the Lastie family (including trumpeter Mel Lastie and drummer Herlin Riley). I also met a very good young brass player in New Orleans, Glenn Hall — he's related. It's like playing Six Degrees of Kevin Bacon, with hipper results.

Let's also mention that drummer Derrick Tabb gets pinched in that scene along with Glen David Andrews. They are brothers. This could go on.

PJ: Meanwhile, Annie has really taken to the zydeco thing, and is showing off some vocal chops these days too. We see her with an actual band/project/thing at d.b.a.

JJ: She's very excited to debut on a Frenchman Street stage, and she's enlisted some top-notch talent from Acadiana: The Red Stick Ramblers. This is one of the many new bands that have completely reinvigorated the French music in and around Lafayette, La. Others include Feufollet and the Pine Leaf Boys. I don't want to forget Lost Bayou Ramblers, a group that I think has made one of the best records this year, Mammoth Waltz. I digress a little, but the point is that there's a whole other scene from South Louisiana that's totally cool.

PJ: In New York, Delmond is getting some good press for the Mardi Gras Indian collaboration he did with his father. Of course, he's a bit peeved that critics don't seem to understand the Indian thing fully; that Indians seem to think it's sacrilege; and that the straight-ahead contingent (represented by Wynton Marsalis) don't seem to welcome it as jazz. About the only satisfaction he can get is what his father says: "Dem songs is gonna stand, son."

JJ: This dichotomy gets a little overly dramatized, even maudlin. Sure, there's some tension between art and criticism. That's not unusual. It's the internecine squabbling when you lift the lid on the jazz community that rubs people. It baffles so-called "outsiders"; it turns others off from ever wanting to try a new experience.

I don't remember Donald Harrison's Indian Blues, the real-life template for Delmond's collaboration, getting a similar reception. Maybe it did, and I just forgot to care. Do critics really use the word "recondite" in a conversation? I hope not, unless they purposely want to suck the air out of a room.

PJ: Back in New Orleans, the Loose Marbles are still hanging around Sophia's coffee shop. I gather we're meant to think of this band as a bunch of "crust-punks" from the Bywater neighborhood, although they do know something about a particular Jimmie Rodgers song.

JJ: Not just any Jimmie Rodgers song: "Blue Yodel No. 9," a song Rodgers recorded with Louis Armstrong and his wife at the time, the pianist Lil Hardin Armstrong.

PJ: Speaking of Louis Armstrong, the script writers made a special polemic point to create Davis' music historical tour ... where all the landmarks were now different businesses, closed or razed long ago. "Did you people ever preserve anything of note?" asks one tourist.

JJ: This is regrettably a sad truth about New Orleans: Much of the historic cultural infrastructure is deteriorating or extinct. Armstrong's birthplace and childhood home are long gone. (His home in Queens, New York has been turned into a museum.) Recording engineer Cosimo Matassa's J&M Recording Studio, on North Rampart Street, is where Little Richard, Fats Domino, Roy Brown, Ray Charles, Sam Cooke and scores of local rock 'n' roll pioneers cut sessions. Now it's a laundromat. What's left is a J&M logo at the entryway, and that was once covered by a rug! (The Rock and Roll Hall of Fame has designated it a landmark.) Across the street, historic Congo Square was off limits two years after Katrina as city officials and questionable contractors attempted to rehabilitate what's now known as Armstrong Park. It is now open. On South Rampart, The Eagle Saloon and Iroquois Theater are crumbling.

A note about Preservation Hall, which was mentioned in the episode as well: It's not as antiquated as it seems. The structure is old, but the historic connection to music dates "only" to 1961.

When the city promotes itself worldwide, its culture is presented as one of its great attributes. There was some movement immediately after Katrina to build a National Jazz Center and Park near what's left of these early jazz landmarks — it's what the developer suggests to Nelson Hidalgo. A major hotel chain joined the chorus, and the dreamers started dreaming. Trumpeter Irvin Mayfield envisioned a space for the New Orleans Jazz Orchestra. I'm not sure what happened.

PJ: Well, at least Davis can be counted on to come up with crazy schemes where he's in over his head. Am I to believe he can recruit Clarence "Frogman" Henry for an R&B opera? And maybe Benny Spellman too?

Davis is so giddy to have Frogman Henry in his house, as he conveys to Janette. Check out Frogman's early recordings on Argo Records, the same label that brought you great jazz records from Ahmad Jamal, James Moody and Ramsey Lewis. "Ain't Got No Home" is one of the first hits for that label, a subsidiary of Chess Records, and it features Frogman's trademark croak. My favorite is "(I Don't Know Why) But I Do."

PJ: We haven't said much about the other characters so far, but many of their dramas — Terry the detective, Ladonna as always, the dual-city lives of Janette and Delmond — seem to be about the perils and lures of moving back to or away from New Orleans. I don't think it was an accident that Antoine's marching band was so inadroitly playing "On Broadway."

JJ: Everyone is looking for a reason to claw their way home, but is it worth it? Terry finds a clue outside the Verti Marte in the French Quarter. (Full disclosure: I've eaten many All That Jazz sandwiches. Tasty with a hint of arteriosclerosis.) Janette's invitation to that old world dinner was quite a performance. All those chefs! That's Anthony Bourdain at work — the whole scene is reminiscent of a story in his book Medium Raw. The rabbit dish looked amazing, and the quail may have replaced the forbidden French dish of ortolan. Maybe you can't have it all, but ... call me gluttonous. I'm hungry for more.